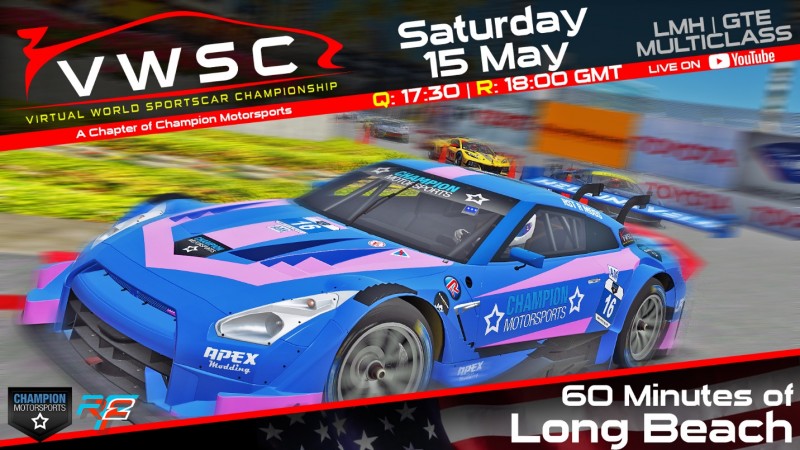 May 15, 2021 – It was truly a day for the British brand with McLaren getting a full return on the effort they put into the LMH class and getting their first win of the VWSC ‘21 Championship courtesy of Wouter de Bruijn.

A total of 26 cars and drivers arrived to contest the tight streets of Long Beach. It was clear that many teams had been hard at work, though not all were able to put past difficulties behind them, as the race was not without its fair share of drama and many became “victims” of the walls and tight space of the track.

LMH-Pro Storm Rider Racing driver Ahmed Abdallah set the pace with his Nissan by grabbing pole ahead of LMH-Pro contender driver Yassin Marzoug and his Triploski GorillAAAH Nissan. Marzoug – not fully into grips with his Nissan yet – had a rough season so far with a DNF and multiple bad finishes.

However, all that seemed resolved as he was quickest among all sessions bar Qualifying up to that point showing dominant form in the Nissan at the street circuit. In the GTE field, it was the SMR Corkscrew Ford of Vasilis Katerinakis on top in the Pro class while Jamie Zolecki took top honors in Am. 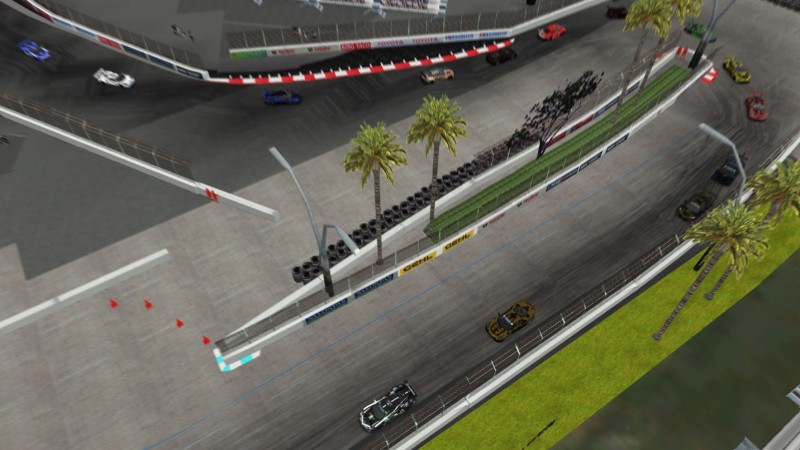 Wouter de Bruijn held off a hard-charging Yassin Marzoug to give McLaren its maiden victory in the 60 Minutes of Long Beach. De Bruijn capitalized on the lapped traffic to take a 7.8-second win over the No. 86 Tripoloski GorillAAA Nissan GT-R LMH of Marzoug. Abdallah will retire early from a “safe” first place after an incident with a backmarker he would lock his brakes at T9 hitting the wall and retiring from the race.

It came after an intense battle between the two LMHs in the closing stages of the 60-minute street fight that saw the independent McLaren Senna GTR entry take over the lead following the final round of pit stops.

De Bruijn pitted with 21 minutes to go touching the wall on pit lane although emerged ahead of the Nissan, which slipped by due to repairing some damage, and had a slow exit from pit lane. De Bruijn was patient enough to “not force the issue” overlapped traffic, courtesy of George Angelidis, splitting the de Bruijn-Marzoug pair before the Pit Stops.

Brian Hall, George Angelidis, and Jason Whited will have an immense fight for the podium in third, in what came as another impatient chase with the trio colliding multiple times, forcing the issue and eventually with Angelidis taking out Whited at T9 over a miscalculation of his braking point. All 3 drivers were called to the stewards’ office post-race for driving standards as the Angelidis/Whited incident caused a multiple car pileup and track blockage.

Brian Hall took the No. 9 independent Ferrari FXX-K Evo across the line in third, ahead of Norm Graf, who charged back after a bad strategy call to take tires in the car’s scheduled pit stop. 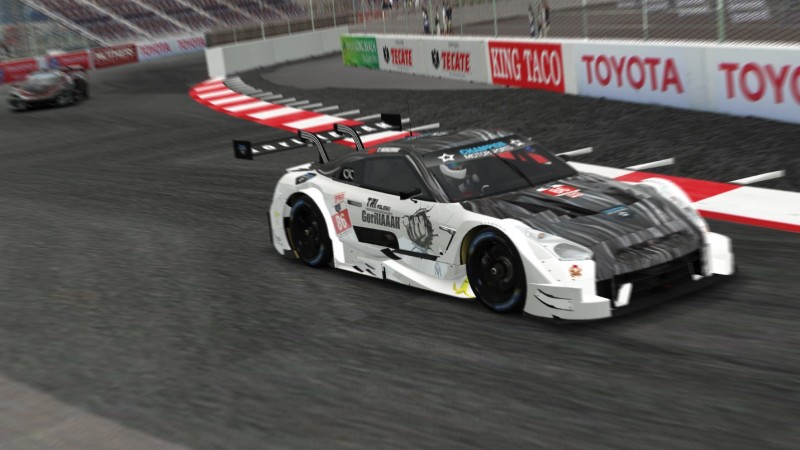 Yassin Marzoug fending off de Bruijn early in the race on in his Nissan GT-R LMH.

Snake Eyes Racing continued to have the inter-team battles that we have come to love. Too close for comfort for the Pit Wall, the American squad, finished 1-2-3 all separated within 5 seconds. Guilherme Bencke took the pole, but it was American Ross Smith, who delivered the victory.

It came after battling the Brazilian, who went into the barriers to avoid an incident. With twenty minutes to go Smith will also be caught and had to almost come to a standstill for the Angelidis-Whited accident letting Hutchison catch up. However, Hutchison will also have to slow down for another track incident that finalized the order of the 3 as Smith-Bencke-Hutchison.

The driver of No. 64 Blue Flag McLaren LMH, Ajay Ren, who underwent another fuel miscalculation error in the pit stops finishing 4th in class, was furious saying, “We need to sort this thing out. Every race and we are losing a podium or a potential win because we keep messing our fuel numbers. This has to stop.” 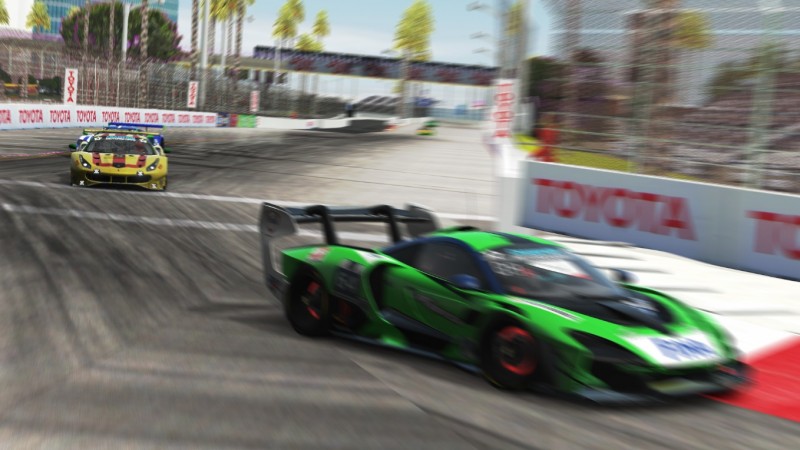 Ajay Ren (Blue Flag McLaren) was furious after missing out on a podium from yet another fuel miscalculation.

From the start, GTE-Pro showed this race will be decided on the details. Early on the battle kicked off between Championship leader Jon Uyan of CMS Pro Ferrari and runner-up Katerinakis of the SMR Corkscrew Ford. Intense battles featuring multiple close calls made for top-notch racing.

What looked like a maiden victory for Katerinakis ahead of his championship contender came apart yet another time suddenly when he lost control of his Ford 10 laps before the end, proving the difficulty of making the car maintain pace through a complete race.

Katerinakis would lose the rear end and while he saved the car, dropped to 3rd in the process. His teammate, Cameron Sansano, who had come from the back of the grid would be pushing Uyan for the class lead in a spectacular battle that lasted 10 laps with the cars not separating more than 1 sec at any point. Uyan would take the win narrowly ahead of Sansano, both 9 secs ahead of Katerinakis.

Notably absent on the podium of the GTE -Pro field was Jerry Chen, who had an incident at the race finishing 5th and 3 laps down the leaders.

Approached for post-race interviews, Katerinakis “was unwilling to give any press interviews at the time”, clearly appalled by his performance losing another potential win. His teammate could only remark “Kudos to Jon. He drove beautifully and put no foot wrong. I enjoyed the fight and look forward to the second half of the season”. 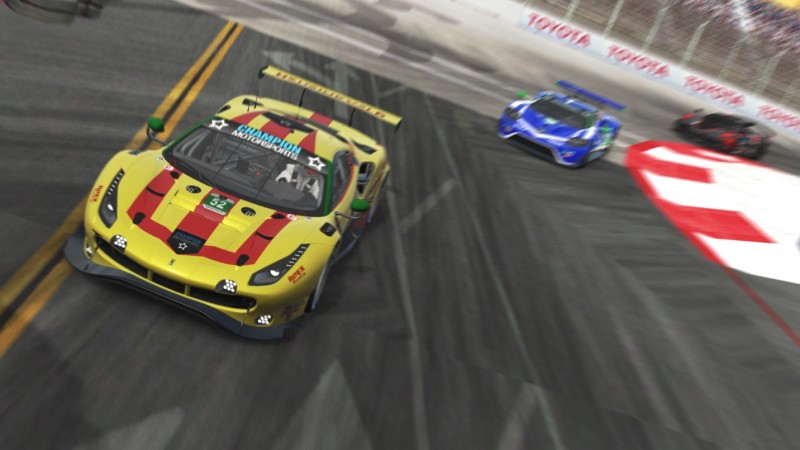 Jon Uyan spectacularly defended from Cameron Sansano late in the race for the win.

It was a rare sighting in the ultra-competitive GTE-Am class with Jamie Zolecki dominating getting Pole Position, Victory, and Fastest Lap while lapping the entire GTE-Am field for his maiden victory in Virtual World Sportscar Championship and his CMS history! Matt Buice in the Aston Martin also a lap ahead of 3rd place, had no answer to Zolecki’s Ferrari.

It was a disappointing result for Trash Panda Aston Martin as not only did the win elude them, but the resurgent Zolecki is putting many concerns to Buice’s aspire to win the Championship. Found post-race Buice said: “He [Zolecki] is fast and only getting faster! Gotta start putting in some serious practice time. Even spend some more time with the engineers to look at telemetry to see how I can help my car behavior a bit better.”

John Maher in his Aston Martin GTE had a career race proving that he can fight and overtake cars, proving many doubters wrong about his consistency. Luca Viani would have an abysmal race with him getting caught up in a “sandwich” by the Angelidis-Whited accident and a driver error that saw him spun at T8. However, as the “face of persistency” in CMS, he overcame to finish a remarkable 4th, his team happy with the outcome after what it could have been much worse. 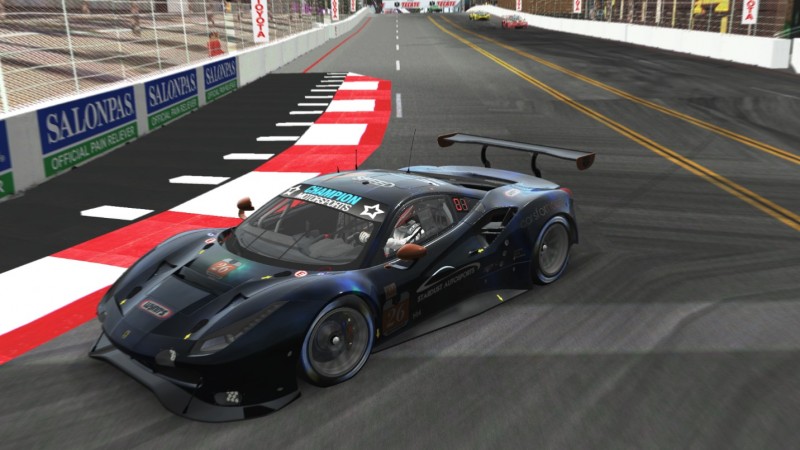 Back to the Glen

The return to North America cannot be complete without the traditional outing at the Finger Lakes and Watkins Glen International for the 60 lap race that carries extra points, which was missed last year due to Covid-19 restrictions. The decidedly upbeat Ferrari and McLaren factory representatives were a study in contrast to Nissan, Ford, and Aston Martin, after the struggle that was on full display during the weekend. To upstate New York then!