January 24, 2021 – After New Year’s every sportscar fan in the world is waiting for Daytona. The twice around the clock endurance race traditionally held at the last weekend of January is for many of us the start of the racing season. With its high speeds and high banks, it’s a spectacle on its own. The sun may rise at Daytona in the United States, but it was the machine from the Rising Sun country where the day belonged. Nissan finished 1-2 in LMH-Pro and 1-2-3 in LMH-Am dominating the first race of this new era of hypercar sportscar racing.

Ahmed Abdalla took the win in LMH-Pro class and overall, shifting from his dominant GTE-Pro performances from last year. While he couldn’t make the full season last year, this year is joining newcomer Storm Rider Racing with a pair of Nissan GT-R LMHs and from the get-go demonstrated his top form. From start to finish he would lead the class unchallenged, finishing some 30 secs in front of his closest rival.

That couldn’t be said for his teammate Jason Whited, who is facing a challenge mastering “the beast” as he calls it coming from the LMP2 Oreca last year. The crew of Storm Rider Racing has some work to do to help Whited because the drums of war are already beating… 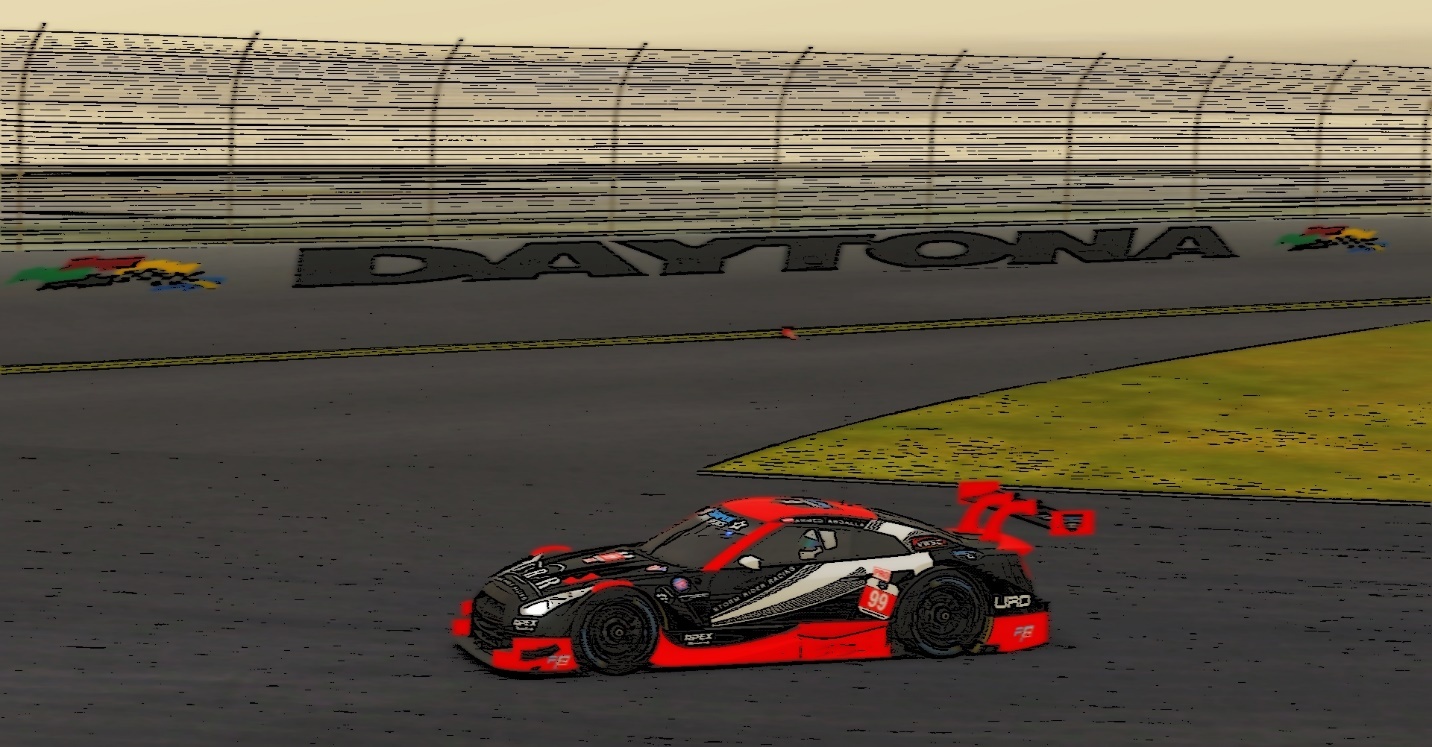 A new threat in the name of Tripoloski GorillAAAH sponsored by Gorilla Glue also entering a pair of Nissans has menacing pace. Marouane el Idrissi would finish a close 2nd, but unfortunately, that couldn’t be said for his teammate Yassin Marzoug, who after strong practice showing good pace his race weekend didn’t unfold as he expected.

A bad qualifying and a spin at the bus stop during the race dropped him 9th in the standings and the last LMH-Pro car in the lead lap. That left ascending driver George Angelidis of privateer Ferrari Team Maranello Concessionaires to battle for top honors.

The highlight of this race in this class had to be the relentless nighttime battles of George Angelidis and Marouane el IDrissi swapping places 2 times and Jason Whited with George Whitehouse banging wheels until the early hours of the morning. Angelidis and Whitehouse would be down in speed to the Nissans but would attack valiantly both, with only Whitehouse making the pass stick.

Ultimately, Angelidis would collect his 1st podium of the season in the new class getting big points by driving cleanly and consistently. Independent Ferrari entries of Brian Hall and Norm Graf would settle for 4th and 5th place respectively further behind. Sole McLaren Ground Effect ST Team’s driver George Whitehouse would start well in 4th, but after some mistakes of his own doing he would settle for ultimately 6th place.

LMH-Am was also dominated by the “Godzilla”, the GT-R LMH sweeping the podium. Snake Eyes Racing showed their serpentine adaptability moving from last year’s 8 Liter V10 to this year’s 2 Liter I4 Turbo still being competitive like “business as usual”. Their reptilian skinned cars blended well with the “King of Monsters” and formed a powerful package.

They would finish 2-3 in the standings after an interesting inter-team battle of Wayne Hutchison and last year’s GTE-Am Champion Ross Smith. 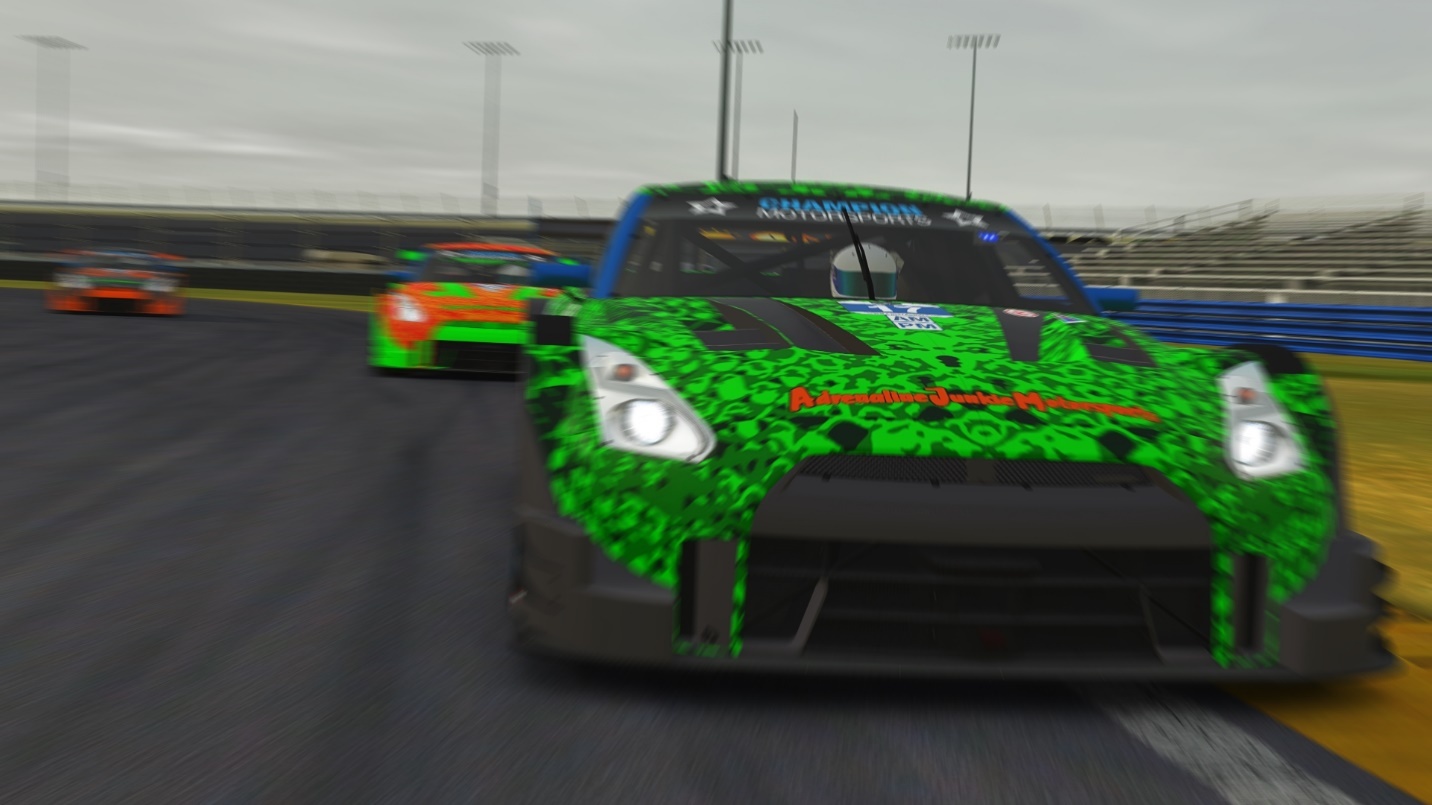 But the win belonged to vintage racer Steve Carman of Weyerbacher Brewing, who after saying that “modern sportscars are for kids”, he did give them a go and showed “the kids” around who is the boss. It wasn’t without drama though as he got several times confused with the “flappy paddles” and made mistakes shifting from his traditional H-pattern shifting he is used at. Carman’s win would be the first in any modern sportscar build in the 21st Century admittingly saying “a weird, nice feeling”.

The sole Blue Flag Mclaren team of Ajay Ren and Tom Aiken would leave devasted after both holding the top place for part of the race. Aiken would make a mistake in the bus stop, crashing and losing his wing while Ren would ultimately fall down the order after challenging leader Carman for many laps.

Guilherme Bencke the last driver of Snake Eyes Racing would have a weekend to forget after several penalties dropped him laps down the order, but he keeps his hopes up claiming that he is “excited for our home race in Motegi”.

Shakeups happened in the GTE-Pro class during this race. Last year’s LMP2 Champion and favorite ByKolles Racing were going to start the race without their 2nd driver, Cosimo Streppone, resting all their hopes on the Champion Colin Moore. Unfortunately, Moore hasn’t got his hands around their new Corvette C8.R and he had a lackluster pace ultimately retiring after a collision in Turn 1. 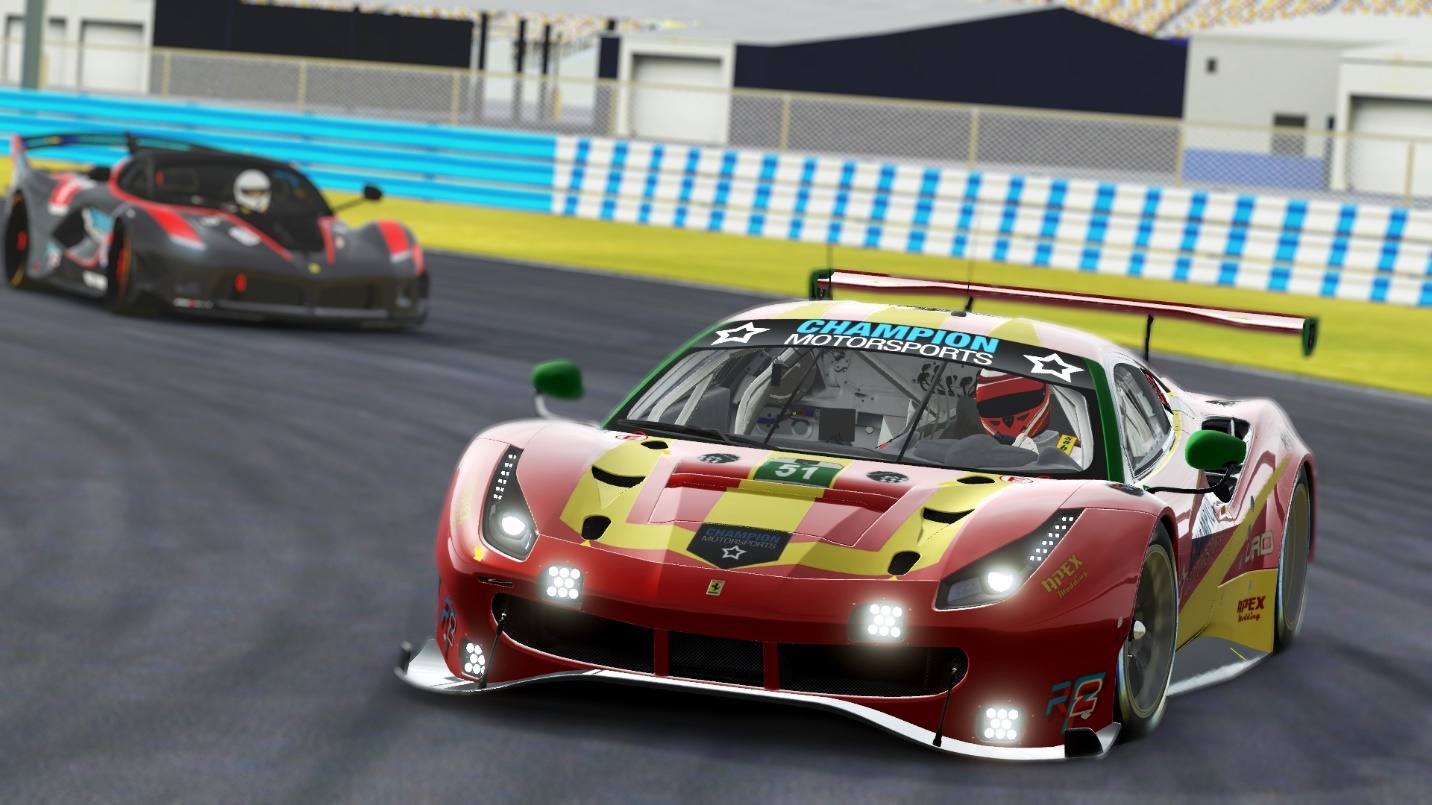 Ernest Dela Cruz dominated his class scoring a 1-2 with his teammate.

The highlight of the race was a spectacular chase between Vasilis Katerinakis in the SMR Corkscrew Motorsports Ford and Matthew Marlow in the CMS Pro Ferrari for 2nd raging for most of the morning hours.

Katerinakis would attempt a failed overtake maneuver at Matthew Marlow at the bus stop with Marlow closing the door firmly. That would not stop Katerinakis though and he would have his Ford bumper for laps to come glued to the back of Marlow’s Ferrari unable though to find success. That back-and-forth battle would ultimately end with Marlow fending off Katerinakis giving a 1-2 to his team. However, Vasilis Katerinakis scores A CAREER HIGH of 3rd place and 1st podium!

That left Jerry Chen with his Porsche 991 RSR capitalizing on the bad call of the #111 crew of Jon Uyan’s CMS Pro Ferrari 488 going into wets while the rain never really lasted. Uyan would come back at Chen in the last hour of the race making a grave mistake at Turn 1 destroying half of his car and then getting a penalty for speeding in the Pits sealing a forgettable day. Chen finished 4th with independent Porsche entry James Walker 6th in class.

Shakeups happened also in the GTE-Am class. After the departure of Snake Eyes Racing Champion Ross Smith and Dodge, their previous weapon, the team hasn’t found their footing with the Corvette C8.R. “Flying” Frank Radosti has his wings cut retiring early in the race with new driver Horacio Beckert Polli sticking it out to the end to get a satisfying 4th in what seemed though a badly setup uncompetitive car.

However, reports for intrigue in the team are heard. Reportedly, the two brothers did not practice together during the week leading up to the race while other reports state that one of the brothers wanted the other kicked from the team. With both having strong performances and now being Champion contenders, relationships would be stressed, and it will put their brotherhood to the test.

The team was ecstatic but celebrations among the brothers were muted both saying that they look forward to the next race.

Returning Stian Gjorvad and Jamie Zolecki are hoping to make a full season, backed by their teams: Recab NG TMC Aston Martin and Stardust Autosports Ferrari both single-car entries at the moment. They both retired early due to mechanical issues with their cars. A gutful retirement was that of newcomer Rodger Gabryszak when an electronics failure triggered Reverse in his car at NASCAR Turn 4 blowing his engine.

Thankfully, Rodger stepped out of the car OK, but gutted since it happened 5 mins before the checkered flag… 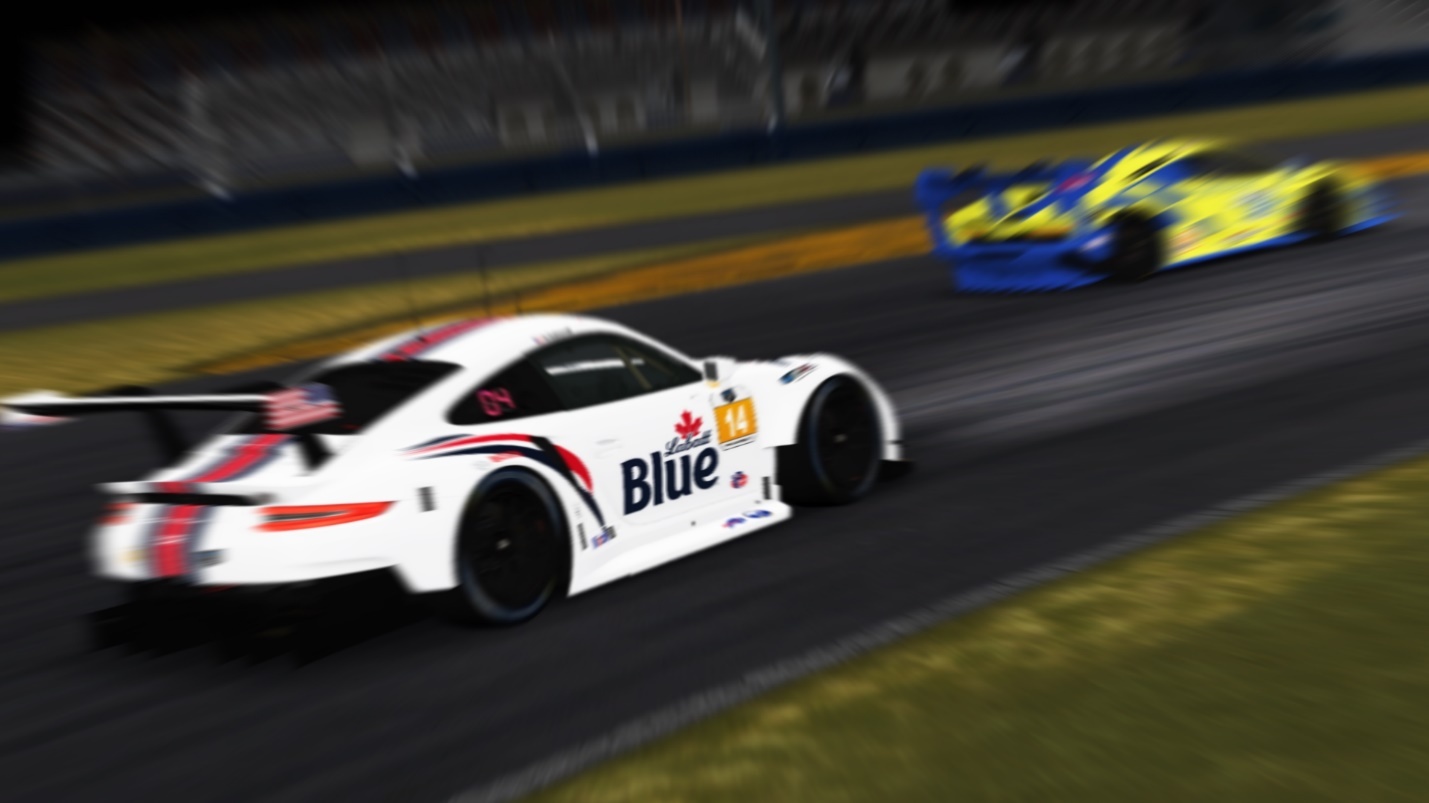 Gabryszak would run competitively most of the race in 5th, before an electronics failure 5 mins before the end.

The Championship will now take a pause before moving thousands of miles west to the country of the Rising Sun for the 60 Minutes of Motegi. What’s about to happen at Motegi is anyone’s guess at this point, but we do expect the Nissans to have a strong outing at home as the other teams are trying to stop their dominance… 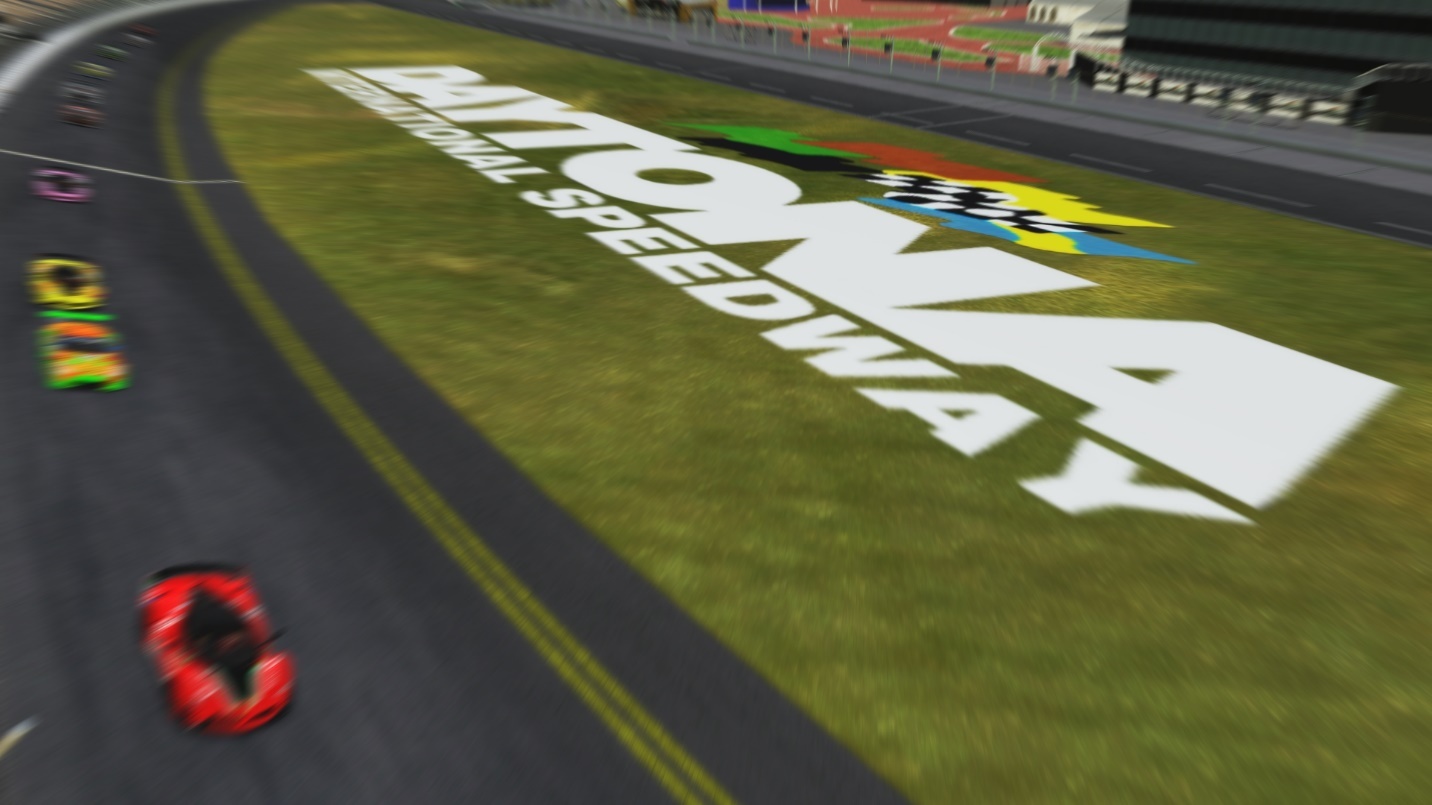