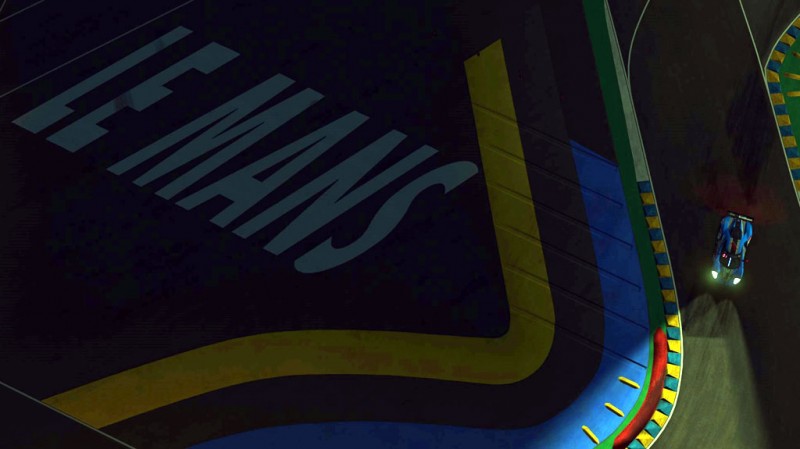 In LMP2 class Jason Whited after the late pit stop by Marco Antonio Rodriguez was handed the win finally getting his Championship back on track and jumping to the top of the standings. Strong performances the past few races seem to show that the crew of the #85 squad has sorted its gremlins and is back in top form as we are used to it. That cannot be said for the #29 crew of Don Baumbach, who has been having a tormented last couple of races, and retirement at Le Mans after an accident at night. Undoubtedly if SimHQ Motorsports need to have any hope for the Championship, they need to sort out the problems that keep plaguing their side of the garage since they would need strong finishes from both cars if they are to beat ByKolles Racing.

Speaking of ByKolles, “disaster” is the word appropriate for the pairing of Cosimo and Colin. Not only they failed miserably to capitalize on a good opportunity of point-scoring at Le Mans and to firmly establish their lead in the Championship, but also failed to abide by the #1 Rule in Racing: “Don’t hit your teammate”. During the nighttime, while Cosimo and Colin where battling Cosimo touched the back of Colin’s car into Mulsanne corner sending him into a spin and heavy damage, dropping them out of contention for the lead. Cosimo had a career-low finish, hitting also Bob Roberson at Mulsanne corner during the night and quickly dropping down further the order and by the morning after a big hit that took his rear wing, a full lap behind. Colin, also unable to make up places ended up fighting his teammate for a lowly 6th at the line. Another great performance was from Carlos Pons collecting his 3rd podium of the season gaining big in points by driving cleanly and consistently. With that finish now Carlos moves up ahead Don Baumbach in the Championship and is the highest independent Championship entry.

Jason now is the leader of the Championship with Cosimo behind, 4 points afar. While SimHQ Motorsports outscored Bykolles, ByKolles Racing still leads the Championship 23 points ahead of SimHQ. Expect this battle to go to the wire.

In LMPC Bob Roberson managed to still hold the lead of the Championship from Tom Mountjoy’s assault. Roberson was running a good pace following Mountjoy while newcomer Tom Aiken held the lead. During the night Tom made a mistake and Roberson was running up to 2nd. But then he himself succumbed to a hit from Cosimo and some spins of his own doing.

Newcomer Tom Aiken won the class in a solid drive and Tom Mountjoy making that mistake cost him the opportunity to catch him… Roberson was outscored by Mountjoy only by 4 points sending a clear message that he is not going to let that lead in the Championship go easily. 4 races left, but LMPC is closing in…

The inability of Tom to score many more points higher than Bob means that Roberson in his MOMO Performance Racing Oreca is still leading the Championship of his class 22 points adrift of Tom.

GTE-Pro was a straightforward win for Yassin Marzoug and Corvette due to the mishaps of all the other GTEs. First was Vasilis Katerinaiks‘ Porsche that had an accident in the first 10 mins. Cameron Sansano was next with a big lockup in Mulsanne corner saving the car but destroying his tyres and the team’s strategy. Marouane el Idrissi and Yassin battle it out briefly, but with the Corvette driver winning the battle early on and never again challenged. 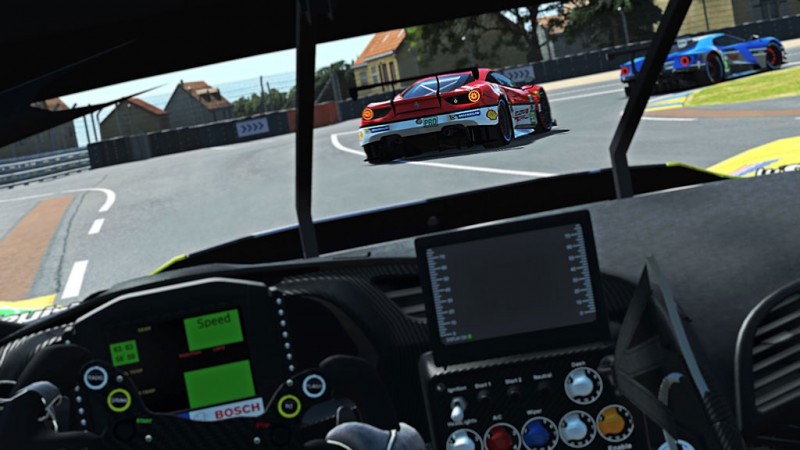 Marouane would be next making a mistake suffering huge damage and a lot of time. That left early on the GTE-Pro field spread apart with only a relevant battle being that of George Angelidis in the Ferrari and Jerry Chen in the MOMO Porsche that we have been used to see. They would lap identical times neither gaining nor losing any with George leading the duo and Jerry following closely behind.

At that point, it was controlling the pace for Yassin followed by Cameron with a charging Jon Uyan in the Ford closing in, after a bad qualifying, on Jerry and George relatively quickly. 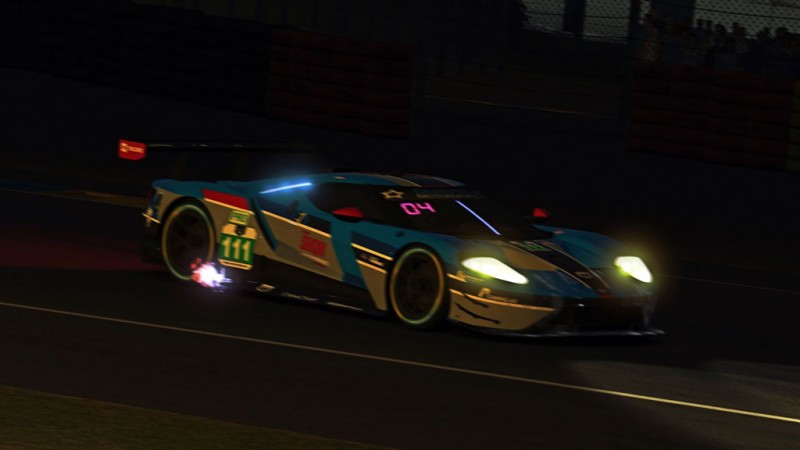 Jon Uyan on the hunt

Then it was Pit Stops time. Smooth Jerry missed his Pit Stall, losing significant time, and a rapidly recovering Jon catching up and passing both George and Jerry closing in on Cameron. The race wasn’t over for the Ferrari/Porsche duo with Jerry closing in on George. However, Jerry’s Porsche team pushed the envelope on their fuel mixture that proved too much, their car failing to reach its own Pit Box in the 2nd Stop devastatingly ending their Le Mans assault early and stripping us of the only good fight remaining in GTE-Pro.

After the last round of the Pit Stops Yassin held almost a half a lap lead, with the two Fords of Cameron and Jon in 2nd and 3rd. The Ferraris would run a lonely 4th and 5th. After poor outings of the SimHQ Motorsports – CMS Fords, it was redemption time as Scuderia Cavalli failed to outclass the Fords in a big point-scoring opportunity.

This performance was a big stab for the Scuderia, the Championship lead now extending to 34 points…

Cameron Sansano still leads the Championship with 112 points, 25 from Marouane, with Yassin’s strong Le Mans finish propelling him to 3rd with 75 points. 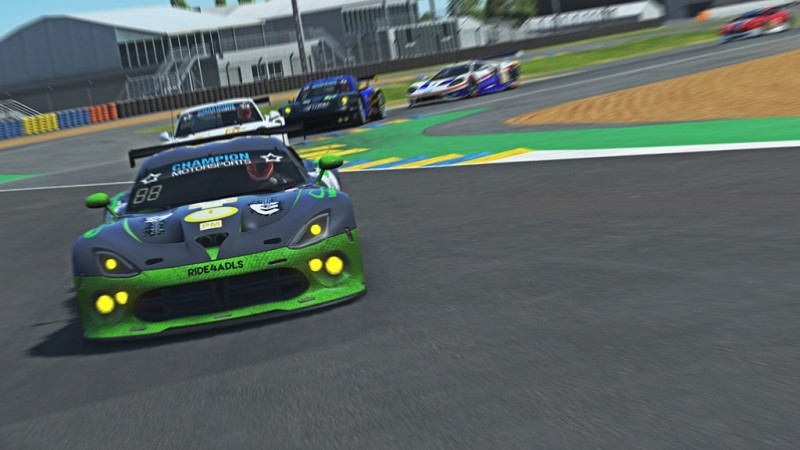 Battle in GTE-AM was thrilling

Probably the most interesting class to watch. Major shake-ups happened in the GTE-Am class during this race. Points leader Snake Eyes Racing Vipers were going to start the race from pole with Ross Smith, hoping for a strong finish to extend their lead and solidify their Championship.

The race started with a spectacular chase between Ross Smith, Peter Meier in the Porsche, and Tom Nasella in the Rothman’s Ford for the lead and the pair of Tony Boynton and Matt Buice in the Aston for 5th. This quickly set the pace for the GTE-Am class that would be an intense show all the way to the end.

Peter would attempt a failed overtake maneuver at Ross smith in the first Mulsanne chicane damaging his car and dropping him down the order. Mike Buice would be unfortunately collected by Thomas Johansen spinning LMPC Oreca. That left “Ruthless” Ross in the lead with Matt capitalizing on the errors of the others and a recovering Peter. Tom Nasella had a torrid race plagued by multiple spins, thankfully resulting in not significant damage but dropping him down the order. “Flying” Frank had his wings cut this time, recovering from high fever during the week, but becoming a trooper to help his team score big points, not without his share of drama having repeated offs and big hits, but finally managing to see the coveted checkered flag.

A late S&H penalty for Speeding in the Pit Lane for Ross would fire up Matt Buice that made his Aston fly and setting Best Lap after Best Lap in the Am class trying to catch Ross and get his first podium, win and Le Mans victory all in one. However, that wasn’t meant to be as a 75-second gap was too much to overcome. But Matt scores A CAREER HIGH of 2nd place, 1st podium, and highest finish for the Trash Panda Aston Martin in the Championship! That 2nd place at Le Mans means that he is propelled to 4th in the Driver’s Championship surpassing both the Rothman’s Ford drivers of Tony Boynton and Scott Beck. 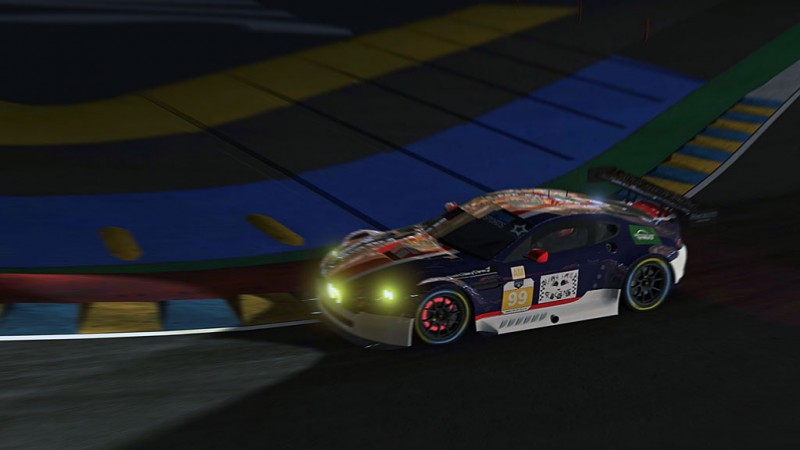 Trash Panda Aston Martin now becomes a force to reckon with coming 2 points from 3rd place SimHQ Motorsports – CMS. With such performances, 3rd place is almost guaranteed for them. Peter Meier had a fantastic recovery to finish 3rd just 20 sec shy of 2nd place, A CAREER HIGH, and 1st podium as well.

The outcome of this race means now that Snake Eyes Racing is 30 points ahead of Rothmans leading the Championship!

In the Driver’s Championship “Ruthless” Ross now gains the lead of the Championship over 2 points from Tom Nasella (!!!) with 114 points. Frank Radosti completes the Top 3 with 87 points. 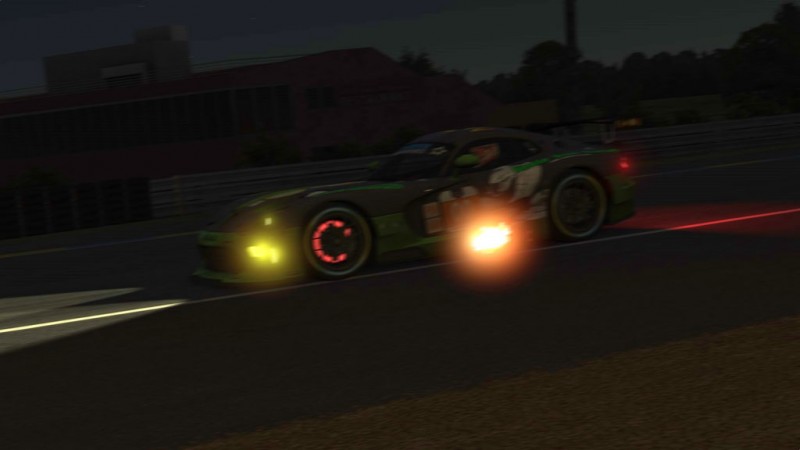 “Ruthless” Ross Smith now gains the lead of the Championship

From “Big” Le Mans to “Small” Le Mans the Championship moves over to Road Atlanta for Petit Le Mans, the 100 minutes with darkness, and always the chance of rain in Georgia in October, things will get exciting! 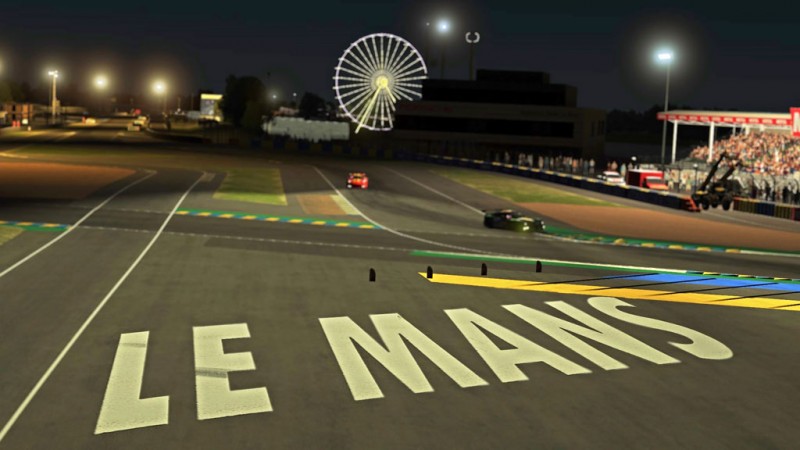