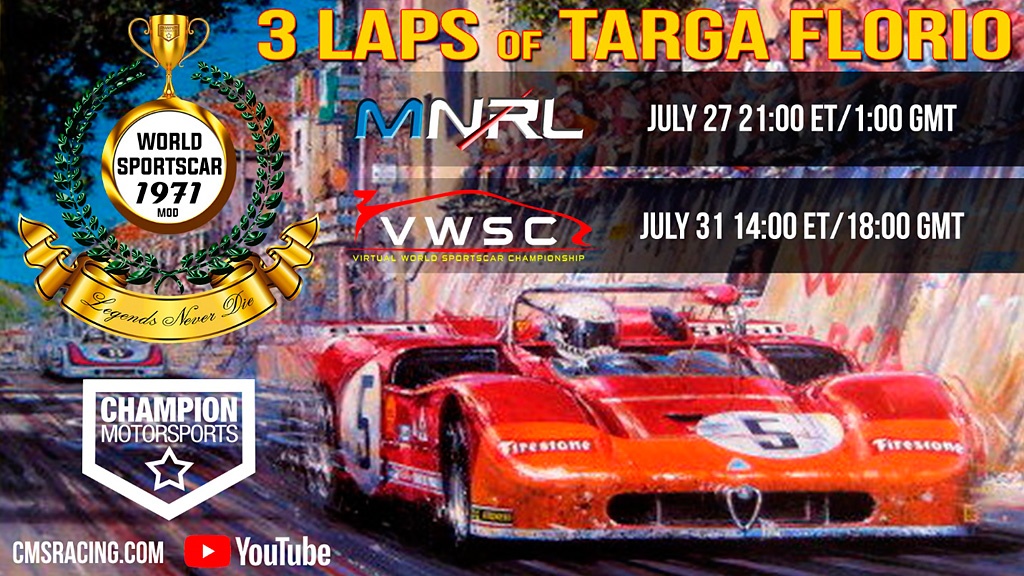 July 31, 2021 – The 1971 VWSC Targa Florio was “one for the ages”, such it was such a special occasion that 22 cars took the flag to start on the Sicilian countryside road. Targa Florio without Ferraris can’t happen and there were 5 in this race: 1 factory entry of Scuderia Cavalli with George Angelidis in Purist and 1 for Gasoline Aftershave Bros. with Marouane el Idrissi in Pro, the rest 3 of Peter Meier (Purist), Bruce Hopkins (Am) and Santiago Dancourt (Pro) all privateers. A strong presence was that of Alfa Romeo too with Jon Uyan (Pro) arranged to drive for Alfa Romeo CMS Pro team, having an initial sortie with Porsche in the first half of the Championship joining Gilles Lalonde in the sister Alfa.

The Porsche factory was represented by just one entry for Rookie Monsters with Ben Boorman at the wheel along with 6 other privateer ones including that of Le Mans winner Wouter de Bruijn, Mark Jones, and newcomer Ludwig Askins. Boorman and Askins both of whom have good experience of racing in Sicily were the clear favorites.

Targa Florio had a large entry, of which, no more than a handful were serious contenders for outright victory, the rest racing amongst themselves for class honors, and a few of them being hopeful “outsiders” for finishing in the first ten and in the big glory of finishing. The fact that there is always a lot of “traffic” on the circuit in the way is part of the atmosphere of the Targa Florio, which has always been a law unto itself, for it is not an event to be regarded like a 10-lap dice round Brands Hatch; it is more a state of mind.

When Vicenzo Florio started the series in 1906 there were ten starters, of whom six finished, and he described it as “a race for gentlemen with their motor cars on normal roads and encountering all the hazards one normally meets while touring by motor car”. The Targa Florio has always maintained this characteristic, and to change it would be to change the whole conception of the event, which is why the 72-kilometer circuit is little changed, and anyone who is still running at the end is justifiably considered a hero racing driver by the Sicilian public. A total number of 31 people set a Qualifying lap the month prior, but with non-arrivals, withdrawals, and cars that did not pass scrutineering, 21 were lined up for the start of Saturday morning at 10 a.m., under a blazing hot sun and cloudless skies.

Qualifying, which had been held on the month leading to the event had set the island full of disappointment, for the Alfa Romeo team were stumbling over themselves and the Porsche team set the three fastest qualifying laps. Most important of all was that Ben Boorman had made the fastest qualifying time, in 32 min. 14.2 sec., only to be broken by the race record which Ludwig Askins set at 31 min 58 sec, both impressive, nevertheless.

When the race started the Alfa Romeo team just went from bad to worse, with Gilles Lalonde getting collected in an incident with Santiago Dancourt’s Ferrari early on and wasting more than three-quarters of a minute before he could get going and then as he was recovering crashing it at the back of Joe Miller’s Storm Rider Racing Lola, damaging the chassis and retiring Miller. Bruce Hopkins bounced the Ferrari 512M off a rock and broke the front suspension and Marouane el Idrissi’s Ferrari went off a cliff and took a minute to rejoin the track. So, the Italian branded cars had only Jon Uyan in the Alfa and George Angelidis in the Ferrari in 5th and 8th respectively looking pretty gloom for a win.

Porsche, on the other hand, was feeling very confident, and it was a straight fight with three Porsches of Ben Boorman, Mark Jones, and Wouter de Bruijn. Further back there were a number of Lola T70 Mk.3B models that could well figure in high places if they kept on the road and out of trouble, notably the two n00n Racing cars, driven by Yassin Marzoug and Ross Smith, while Jason Whited and Oscar Dancourt had two T70 Lolas that could well be in the running. The rest of the entry faded pretty fast at the back with various challenges and offs.

An early battle to the pleasure of the Sicilians fired up early on when the train of Oscar Dancourt, Yassin Marzoug, Jason Whited, Marouane el Idrissi and George Angelidis was fighting for 5th. 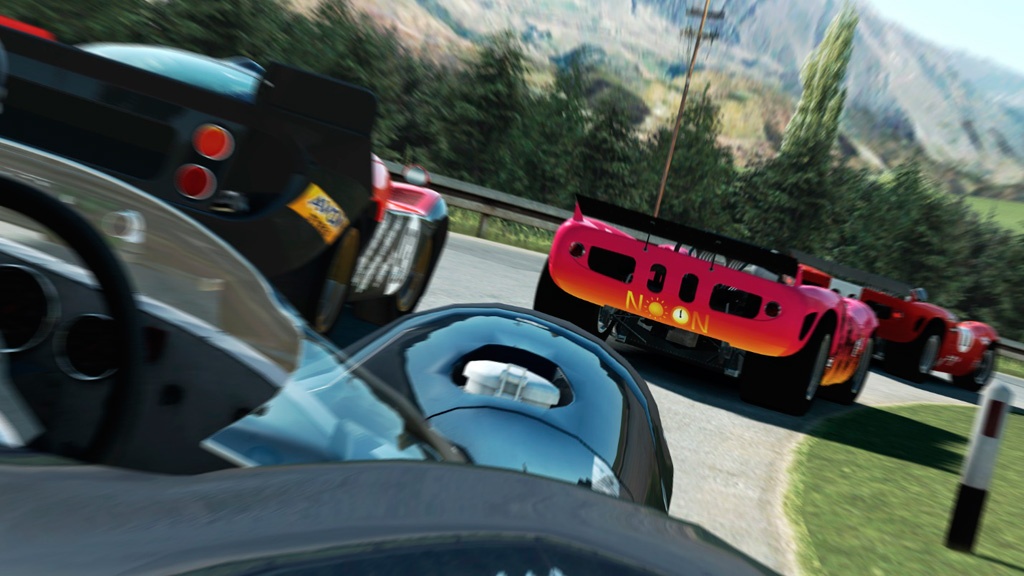 Mark Jones was really flying and had nearly caught the other Porsche of Boorman early on. Jones had been fast, but Boorman was faster, so the Rookie Monsters Porsche was leading on lap one, followed by Jones, Jon Uyan, Jason Whited, and Gilles Lalonde. 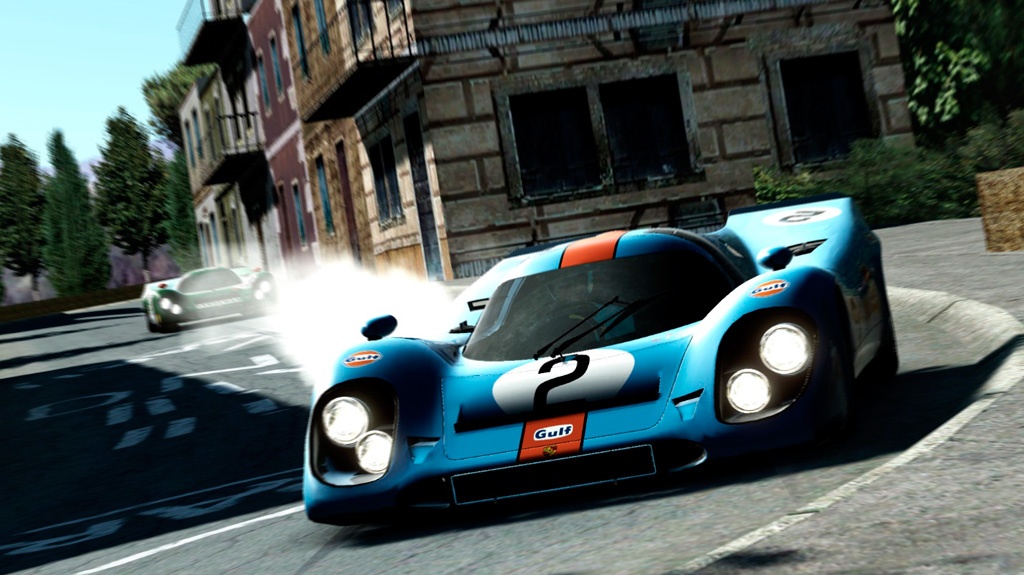 Mark Jones flying and catching up the other Porsche of Boorman early on.

George Angelidis had been delayed by an off where he got stuck behind a fence in his Ferrari, and by the time he had asked a local to open him a gate so he can get back to the track, he had dropped to 11th position. After one lap Mark Jones stopped for fuel, which let Jon Uyan get into second, with Yassin Marzoug in third. Ross Smith went off the road in the Lola and stopped to remove some pieces from the radiator that prevented him from coming back on track, which wasted a lot of time. These troubles among the frontrunners allowed some of the backmarker cars to move up into the top ten, notably the Porsche 917K of James Andrew from England and the Brette Brooks Lola T70.

In the middle of lap 2, a vociferous fight between the Lolas of Yassin Marzoug and Jason Whited broke out but then it was heard that Whited had stopped out on the circuit with his car upside down. The Mark Jones Porsche was firmly in fourth place and the other independent Porsche entry of James Andrew was in eighth place. The Alfa Romeo T33/TT/12 of Gilles Lalonde had crashed on the Bonfornello straight for some inexplicable reason, the driver sustaining minor injuries; and the n00n Racing T70 Lola of Ross Smith had crashed a bit further on and struck a spectator’s Fiat 500 as it careered off the road, there being no injury to report.

The dust had been well and truly blown off the road by now and conditions were very good, and the situation remained unchanged on lap two albeit Wouter de Bruijn got over a wall in his Porsche and got stuck. At the end of lap 2, there was pandemonium in the pits as Brette Brookes, Gilles Lalonde and George Angelidis came in together. Wheels, jacks, pneumatic hammers, and mechanics flew everywhere and there was a real panic for a short time, but all cars got away all right with Brookes heading Angelidis, but both nearly three minutes in arrears.

The loud crowd was not at all happy and wasted no time saying so when Jon Uyan limped to the pits where a pair of new front tires were fitted and he rejoined the race and went storming on full song, even though the Porsche of Mark Jones had already taken over. That was the last they saw of the Gulf livery car, for, Uyan having hit a kerb at Collesano, suffered a broken front suspension and was crawling it to the finish. The Porsches of Ben Boorman and Mark Jones were now in full command and at the end of three laps they were refueled, and the two Commonwealth drivers took over to tour Round and finish first and second in order. 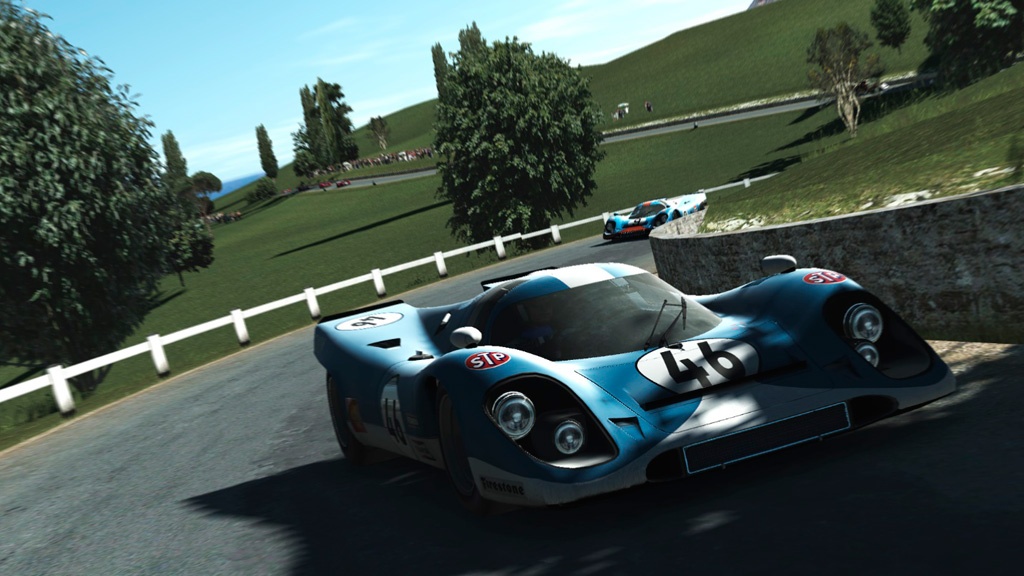 Ben Boorman and Mark Jones had a commanding first and second.

It had been a resounding victory for Porsche, won by fighting hard and giving the Alfa Romeos a bad time from the beginning of qualifying. Boorman was the hero of the day. Porsche had once again inscribed their name in the Golden Book of the Targa Florio and it had been a black day in Alfa Romeo history, slightly alleviated by the second-place finish of Jon Uyan in Pro class. Oscar Dancourt in the Lola would come 3rd in Pro class while George Angelidis and Ross Smith would close 2nd and 3rd in Purist class respectively. Lola was the only brand other than Porsche to take a class win with Brette Brookes taking 1st in Am followed by the Porsches of Tom Mountjoy and Tom Aiken.

From the summery weather of Sicily, the Championship now moves to the gloomy part of Nurburg for the 100 Mins of Nürburgring where the weather and the resilience of teams and drivers prove detrimental for success… 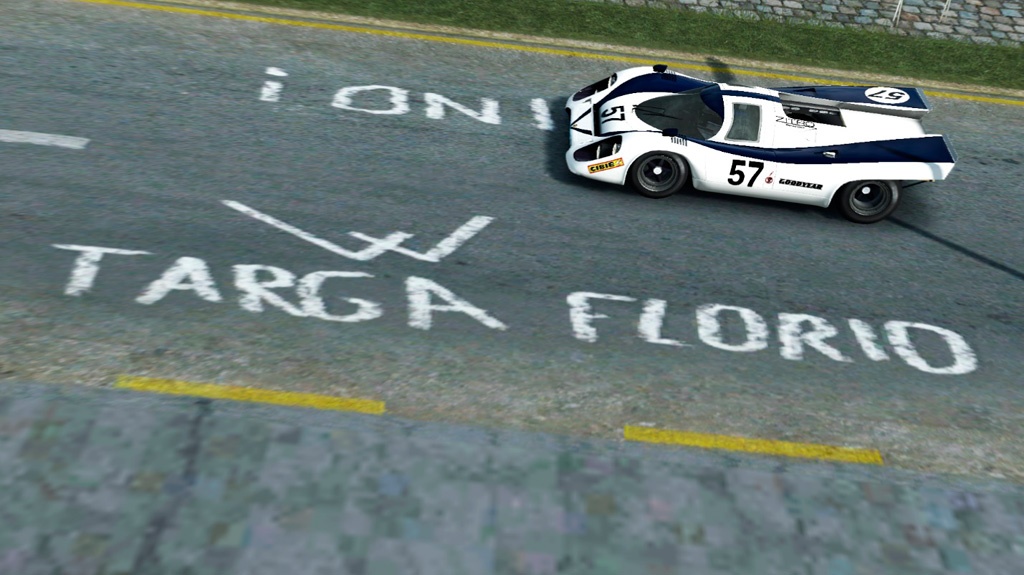