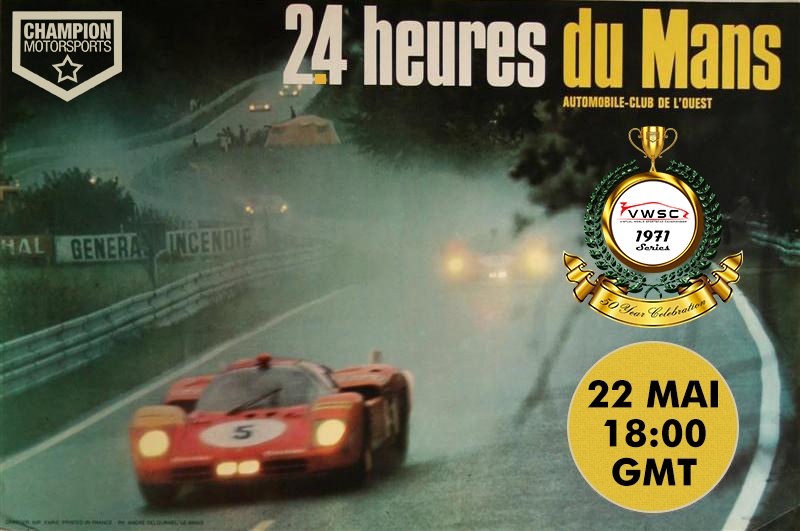 May 22, 2021 – Today the drivers and crews all have recouped themselves after the 2-month summer break and be ready to give it all at it again with high spirits at the 3 Laps at the narrow streets of Targa Florio. An intense race for high nerves will surely be spectacular… But before that, let’s go back 2 months ago and remember what happened at the previous round, the 2.4 Hours of Le Mans.

They say Le Mans picks its winners. Even the most dominant of displays, such as that of the #00 n00n Racing Lola T70 Mk3.B of Ross Smith that weekend, isn’t enough sometimes.

How fitting that this, a 1971 Virtual World Sportscar Championship season that was deemed to be oh-so-predictable with Yassin Marzoug dominating with 3 wins at the beginning of a Championship will see him with 3 DNFs and 0 points on the next 3. A Championship that keeps on giving late stings in the tail.

And where else but at Le Mans, the cruelest of all motor races?

Among others Spa race winner Marouane el Idrissi and Sebring winner Ahmed Abdalla would also retire early on, taking mostly all major contenders before halfway distance. A soaked Le Mans circuit that while the rain stopped early on the track surface was too wet to dry out.

The n00n Racing #00 Lola T70 Mk.3B had produced one of the most complete Le Mans performances seen. It started in 4th, but by the midway point it was already 2nd catching on Pro leader Wouter de Bruijn of the independent Porsche entry – a good 2 of the 2.4 hours, leading the Purist class by a lap or all but 2 laps – until drama struck, turning the race on its head completely.

It was set to be a result that would please everybody. Ross Smith would get a long-awaited first victory at Le Mans after dominating the race. The sister #86 of Yassin Marzoug, had retired before even completing a lap in a “first-lap shunt”, putting all n00n Racing crews hopes on the #00, and oh-boy they were flawless. 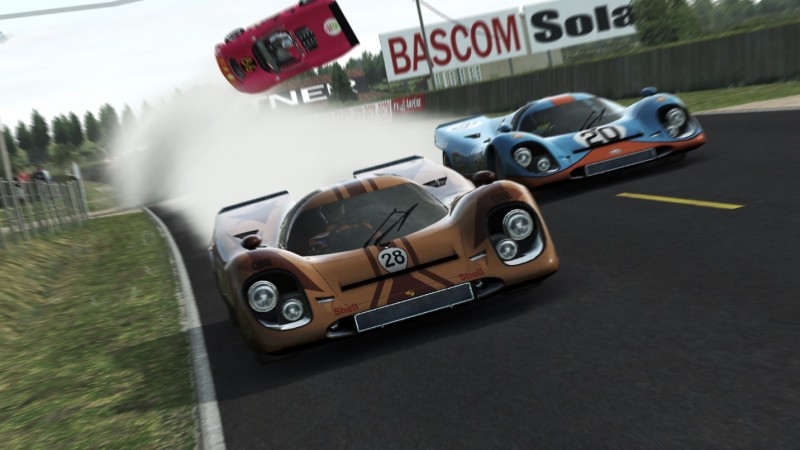 The #86 Lola of Yassin Marzoug rolls before even completing a lap in a “first-lap shunt”, putting all n00n Racing crews hopes on the #00.

Built on the foundations of Smith’s staggering pace that saw him open up a 40-second lead in a couple of minutes, the #00 Lola had built a two-minute advantage to Ben Boorman’s Rookie Monsters Porsche and further 2 laps down to George Angelidis’ Scuderia Cavalli Ferrari. 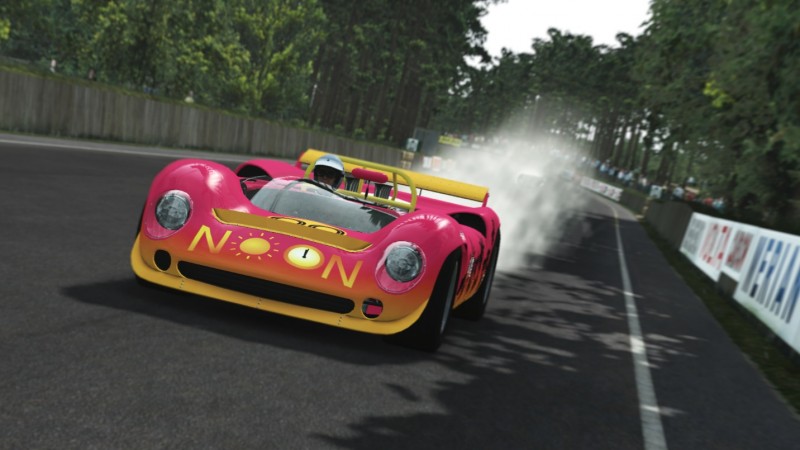 The #00 Lola of Ross Smith’s saw him open up a 40-second lead in a couple of minutes.

But this is Le Mans, a race that is said to pick its winners. That day, it did not pick the #00 Lola.

The action was intense from the 1st running lap. A multicar accident at the kink in Mulsanne would see Aaron Puettman’s Ferrari retire and Ben Boorman’s Porsche being almost completely destroyed albeit the Brit did marvelously to persevere and bring that wreck of a car back into the Pits.

Then it was the crash at Maison Blanche – James Bunn lost it hitting the fence and collecting Gilles Lalonde Alfa Romeo and Jerry Chen’s Porsche in the wreckage.

Throughout the race, the kerb at Tetre Rouge saw immense action. After a multicar accident was reported early in the 2nd lap of the race, many cars were out. Jason Whited was the only one to retire on the spot, but Marouane el Idrissi, his brother Imad, George Angelidis, and Joe Miller all got damage that affected their race. Marouane’s Ferrari would be retired from the Pits a lap later. That left Angelidis and Imad el Idrissi out braving it out trying to fix their damage on their first stop.

By lap 4, 9 cars were out. That kept Ahmed Abdalla’s Scuderia Cavalli Ferrari upfront with Wouter de Bruijn’s Porsche behind and a spectacular ran from Mark Jones to be running in 3rd. 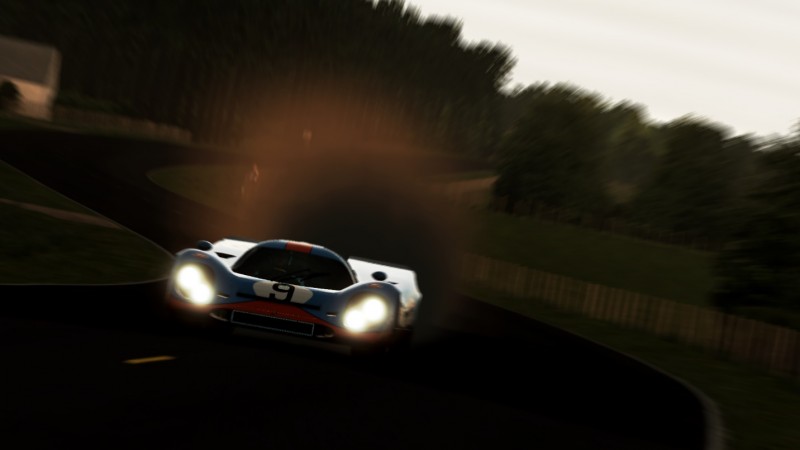 A spectacular ran from Mark Jones to be running in 3rd, early on chasing Wouter de Bruijn.

But Le Mans was not over. 1 hour and a half later Abdalla retires from the lead. With Jon Uyan’s CMS Pro Porsche and Joe Miller’s Storm Rider Racing Lola laps behind it were looking like a clear fight for the win with de Bruijn and Jones in Pro. In Purist it was all but decided – we thought. Smith up a lap from Ben Boorman and 3 from George Angelidis with Hugues Salmon even further behind. In Am, it was only Wayne Hutchison left after Dan Minges crashed his Porsche at Maison Blanche.

The race pretty much continued like this all the way towards the final hours. Jon Uyan and George Angelidis would make an attempt to go on drys during the night, but the track would not dry, and they kept having spins ultimately acknowledging defeat and coming back for wets. It was now all but clear, that Ross Smith would go for his first-ever win in 1971 at Le Mans along with the ever-dominant Wouter de Bruijn in Pro and Wayne Hutchison in Am. Among them only Wouter would accomplish the feat. 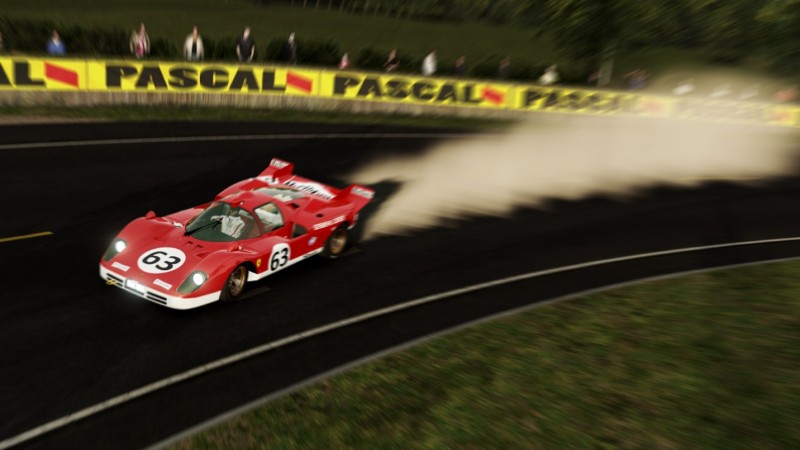 George Angelidis attempt to use dry tires in a wet track ultimately acknowledging defeat and coming back for wets.

Hutchison would retire with 10 laps from the end after losing it in Mulsanne corner coming after a Pit Stop. And for Smith… it was the kerb at Tetre Rouge that did it. The kerb that was cracking for the entire race, it cracked from the pavement on his penultimate pass flipping his car.

“I couldn’t believe it,” Smith said after the race. “I heard screams, and I wasn’t sure if I was alive. And then I saw the fans flipping my car. I was okay, but I knew I had lost. I was just gutted.”

“Then I had to crawl to the Pits and was very slow, so I lost 2 laps,” added Smith. “13 km is a long lap. My hopes of winning dissolved there.”

By the time Smith had hobbled back into the pits, he was already in second place. Ben Boorman had wiped away the one-lap deficit that existed just two laps earlier, diving past at the S/F line and into the lead of the race for the first time in over 2.2 hours.

It was all too late for the #00 to fight back. The 2-lap deficit meant that now George Angelidis passed him as well with Smith finishing 3rd in class. Naturally, there were questions for n00n Racing to ask in its post-race analysis. Why didn’t it play it safe and avoid all kerbs? Why, for all of the inventive ways it had pushed the Lola T70 to its limits through the race, and not driving to a comfortable pace to finish the race?

Wouter de Bruijn finished ahead of Mark Jones in Pro to take the victory. It was Ben Boorman, in Purist, that Le Mans picked. Boorman once again proved himself to be the endurance king in those ’71 Sportscars securing his 2nd win in the season in what most people believe should have been his 4th. And Angelidis? Coming back from his night spins to produce such a persevering display in the race, reclaiming a 2nd place finish after being many laps down.

“It’s a tough race,” Smith said. “Things were looking good for a long, long time, and just, unfortunately, got unlucky with the kerb and the cycle of events after and didn’t get the win. That’s this race as we know. It doesn’t make it any easier.”

“Today what happened is really hard,” Boorman said. “I can tell you, it hurts, and I’m really sorry for him.”

“Somehow, the race chose us today,” said Ben Boorman and Wouter de Bruijn, the latter coming in this race didn’t believe he would be challenging for the win having qualified 6th.

Both Ben Boorman and George Angelidis used the word “sad” when summing up their post-race emotions, offering a great contrast to the jubilant scenes from the previous race. None of them were under the illusion that they had been better than the #00 crew in the race.

This is what Le Mans does to drivers. It offers a mix of emotions few other events in global motorsport can match. It’s not like a regular Formula 1 or GT race, where you’re lumbered with the disappointment for a week or two before the next time you’re out on track, giving you the chance to right a wrong. And you’ve not just put in an hour of effort to get to this point. You’ve literally pushed for days of setup work leading to a bid for Le Mans glory. It may be part of the VWSC season, but really, this is the one race everyone wants to win.

That opportunity to do so comes down to slender, slender margins. And if it passes you by, it may never come around again. But that is the shred of comfort Ross Smith of the #00 n00n Racing Lola can take out of this race. He knows he did everything right. He’ll be back next year, stronger for this setback.

Le Mans can be a cruel cruel race like that. 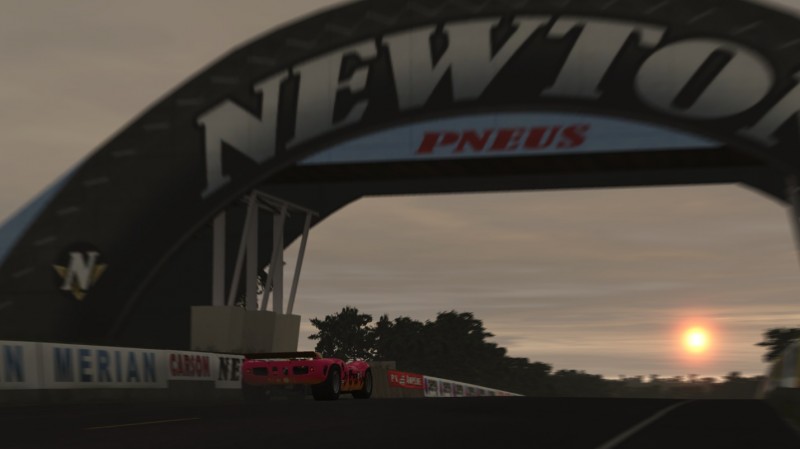 Ross Smith going into the Sunset.