May 8, 2021 – The annual 100 min historic race for sports cars, took place on the magnificent Spa-Francorchamps circuit without any bitching and binding from any outside organizations, or complaints from the participants and used the full-scale circuit, ignoring the “safety chicane” put in at Malmedy for the puny little Grand Prix cars and their timid drivers.

The Francorchamps circuit was at its glorious best during practice, which was held under a clear beautiful sky, much to the pleasure of few English drivers that have been tormented by rain the past few weeks on the island.

The entry for the Spa race was not large, but it had all the necessary ingredients with the Rookie Monsters and CMS Pro 5-Liter Porsches, for Ben Boorman, Jon Uyan, and Jerry Chen, the sole existing flat-12 Alfa Romeo T33/TT/12, rebuilt after its Brands Hatch accident, for Gilles Lalonde, the two Scuderia Cavalli Ferrari 512Ms for Ahmed Abdalla and George Angelidis and one single entry for Gasoline Aftershave Bros. with Marouane el Idrissi at the wheel, and numerous private Lola T70 Mk.3B teams, among the better ones being the n00n Racing team, and the Storm Rider Racing team from the United States with their colorful striped small-block Chevys driven by Joe Miller & Jason Whited.

The Ferraris came with a more planted setup from the “looser” one at Brands Hatch while the Alfa Romeo was equipped with better brakes (although not really needed for this layout) while the Lolas banked on the sheer raw torque of their big engine to lower the lap times.

The start was due at 2 p.m. and at lunchtime, the air became a bit oppressive and heavy as if there were thunderstorms in the offing. Everyone was busy preparing for the race of one hundred minutes with its refueling stops, possible tire changes, and tools and pit equipment in case of emergencies.

Had it been a Grand Prix about to take place there would have been a lot of trouser-wetting and shop stewards and union officials running round in circles to get the start delayed, to shorten the race distance, or cancel the whole thing.

Ben Boorman assured the grid that the rain “won’t hit the circuit” as a British weatherman expert and all 20 cars were lining up on the grid for a warm-up lap, comprised of the 5-Liter sports cars, all on dry tires.

Before the cars cleared Malmedy there was a major accident that took out and damaged several of the competitors.

Shockingly, unbeaten and championship leader, Yassin Marzoug got wide hitting the hay bales and catching the fence on the left side of the track, spectacularly launching his car in the air, luckily landing unharmed.

Boorman took evasive action, but then Jon Uyan also got loose and hit the remaining hay bales hard. His car came to a stop perpendicular to the track with its entire left rear corner missing.

With bits of parts all over the track, Joe Miller hit a hay bale as well going off-road to the stream on the side of the road while Ross Smith managed to escape with some front left suspension damage.

Wouter de Bruijn, Jason Whited, and George Angelidis all passed the wreckage seemingly unscathed. Uyan retired while Marzoug made a desperate attempt to return to the pits. 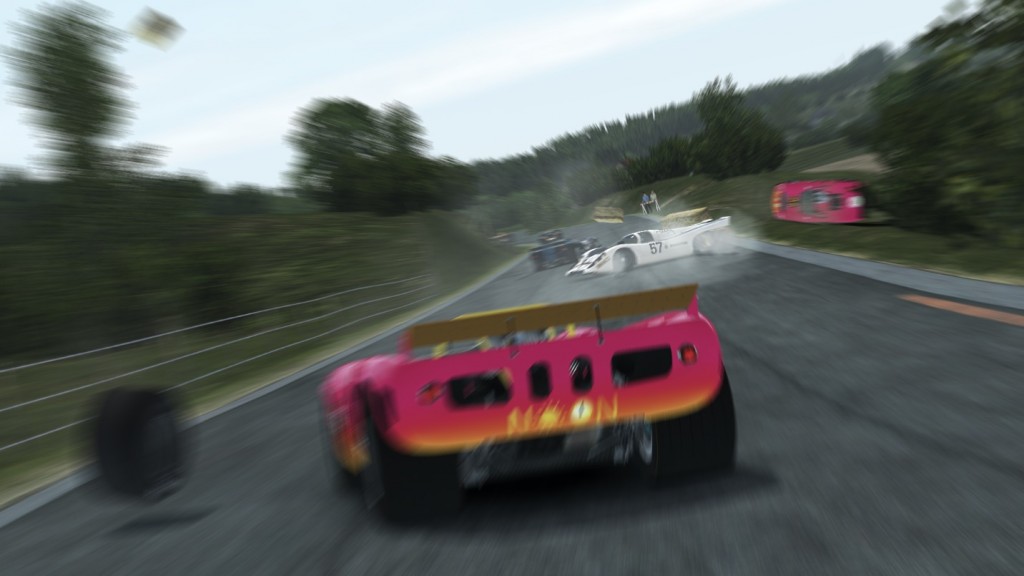 The big crash at Malmedy from the perspective of Ross Smith (Lola).

The pattern of the race was self-evident even before it started, for no one was going to touch the Gasoline Aftershave Ferrari for speed, but the Porsche and the Alfa Romeo were going to need fewer refueling stops so that the team’s pit work could be all-important.

Any opposition that the Storm Rider Lolas might have provided fizzled out before the race was properly underway, for Miller stopped at the end of the first lap upside down, unhappy with the high-speed handling of his Lola and Whited completely losing it at the Masta kink few laps later after earlier incidents at La Source.

Of the early retirees was also Jerry Chen in the other CMS Por Porsche hitting the barrier at Eau Rouge taking all the CMS Pro Porsches out of contention before the end of lap 2!

All the knowledge of Spa and skill that Boorman possessed was not enough to keep the flat-12 Porsche even in sight of the two red Ferraris, but he held a firm third place, ahead of Ross Smith in the only competitive Lola T70 left, Angelidis in the second Scuderia Cavalli Ferrari 512M, de Bruijn in the Porsche 917K, Lalonde in the only Alfa Romeo, Puettman (512M) and Salmon (Porsche 917K), the rest of the entry being way behind. 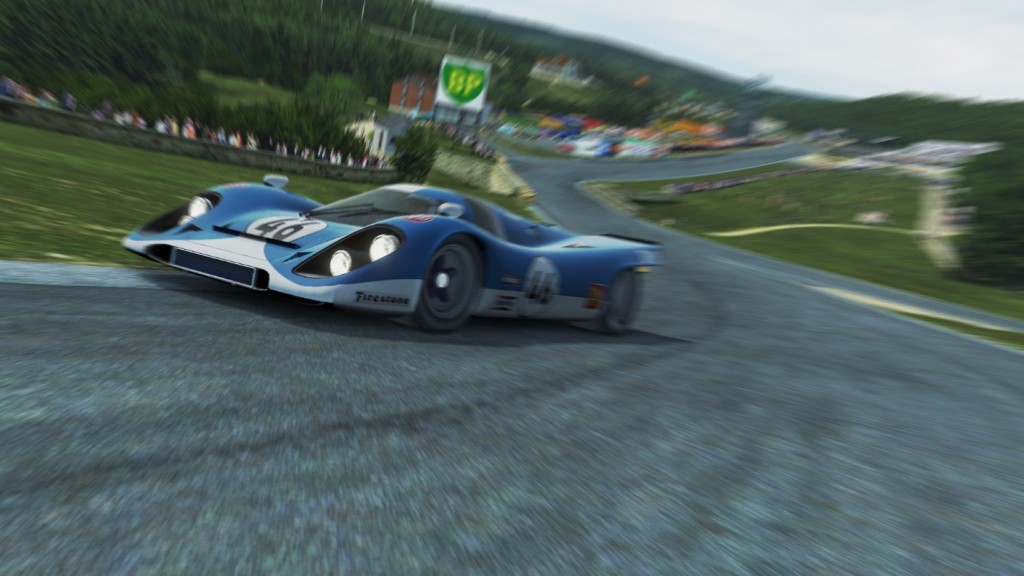 Ben Boorman trying to keep up with the Ferraris of el Idrissi and Abdalla early on.

Marzoug had rejoined the race behind most of the Am cars but in few laps passed them all and was behind the Porsche of Salmon, but his rapid progress did not last and he was out after seven laps feeling dizzy after a spin that he ended up injuring a local farmer’s horse way off course.

For nine laps el Idrissi stayed a few seconds ahead of Abdalla, the two cars running in close company at up to 320 km/h on the downhill run to the Masta ess-bend, pulling 8,800 rpm in top gear, and lapping at new record speeds all the time.

On the eleventh lap el Idrissi recorded 3 min. 2.3 sec. (top 343.5 km/h) and two laps later the Dutch driver came into the pits for fuel, the Gasoline Aftershave mechanics putting in 120 liters and cleaning the flies off the screen in 23 seconds.

The situation was made clear when the Porsche of Boorman stopped for fuel after 14 laps, taking the same time as el Idrissi, the extra fuel mileage of the Porsche being insufficient to compensate for lapping an extra lap against the Ferraris.

None of the faster cars were changing tires at these first refueling stops, and el Idrissi and Abdalla were very evenly matched as was their respective pit-work but el Idrissi had the lead early on edging ever slightly on Abdalla every lap.

Racing for fourth place, the Lola of Ross Smith and the Ferrari of George Angelidis were trading personal bests separated by few meters giving fans the closest on-track battle early on that was going on for laps.

The Alfa Romeo got loose again, luckily not with major damage, so Gilles Lalonde stopped and in the pit took the opportunity to fill the fuel tanks at the same time.

With no direct opposition and no indirect opposition, from the Ferrari of Abdalla and Boorman, el IDrissi could have cruised around, but the driver believed that easing up is liable to cause loss of concentration, which is when mistakes occur.

Back to the Smith-Angelidis fight before they both made their second stop at lap 11 Smith succumbed to the pressure by Angelidis losing concentration and hitting the barriers at Eau Rouge crippling his car, all of which took long repairs and put the car 5 laps behind the leaders.

Around the same time at Lap 14 changes would happen in the Am lead. Dan Minges in the Porsche who was leading by some gap from the Lola of Wayne Hutchison made a mistake at Blancimont crashing badly his car. He would bring the car back to the Pits but the car was deemed beyond repair and the Porsche mechanics retired the car.

With Tom Mountjoy and John van den Bergh out of the race, early Hutchison was the only Am car running.

Angelidis after passing Smith had long since given up going for gaining more positions with the Scuderia Cavalli Ferrari after the top 3 were in a staggering pace and was content with 4th overall, 3rd in Purist class. The second Scuderia car, driven by Ahmed, was ordered to slow down by the pit wall since it was leading Purist class and with the n00n Racing Lolas out of contention, it was a good opportunity for the Scuderia to catch up in the Championship.

Abdalla though did not comply drifting the car around trying to catch up el Idrissi in the lead and when the race was more than halfway through, he went over the protective barrier at Les Combes in a terrifying crash, luckily with Abdalla alive but shaken.

That meant that Boorman in the Porsche inherited the lead in Purist class but far away to contest for the lead of the race.

The Aaron Puettman Ferrari was in fourth place now closing on Angelidis, but their pit equipment was not as sophisticated as the works teams, and a loose hose meant the refueling pump was out of commission retiring the car.

De Bruijn was back in the hunt at 24 laps, in an attempt to catch the red Ferrari and a podium place, but one lap later it was his position at stake!

Hutchison was still driving the Am Lola and going into the long run safely and steadily when the Burnerville bend caught out the Dutch crippling his car. 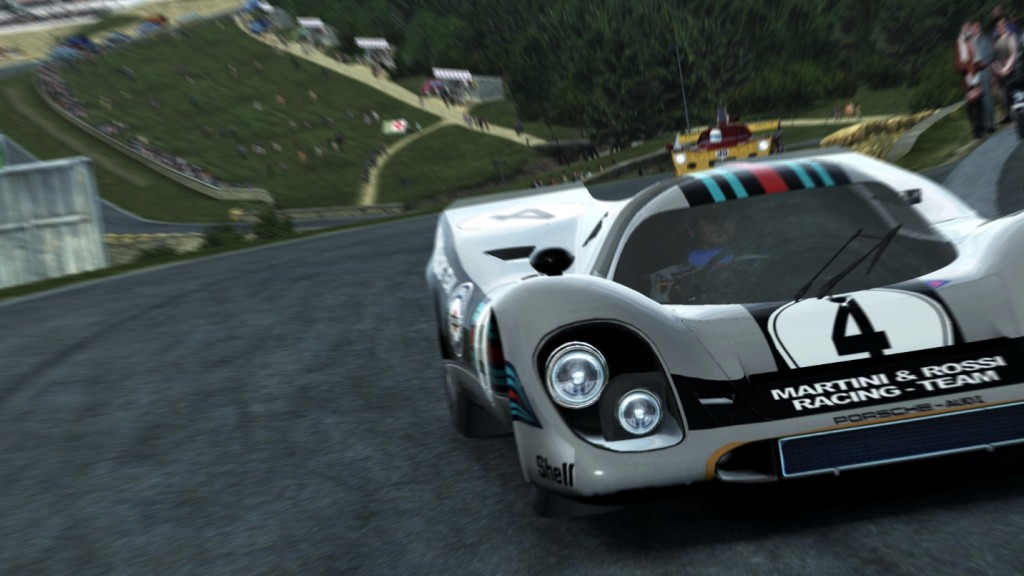 de Bruijn (Porsche) chasing Angelidis (not in picture) for 3rd place before his accident.

The Alfa Romeo of Gilles Lalonde smelled an opportunity to pass de Bruijn for 2nd in Pro class, but he fell short one lap.

With 3 laps to go Boorman would come into a backmarker that the latter would knock a hay bale upsetting the Rookie Monster Porsche with Boorman losing control crawling to the pits.

That would fire up George Angelidis as he was seeing a potential win in class in the last 3 laps that provoked a certain amount of speculation.

However, Rookie Monsters had other ideas, and when Boorman stopped, took on 25 Liters of petrol repaired the car enough to finish all in 5 mins and went off again. 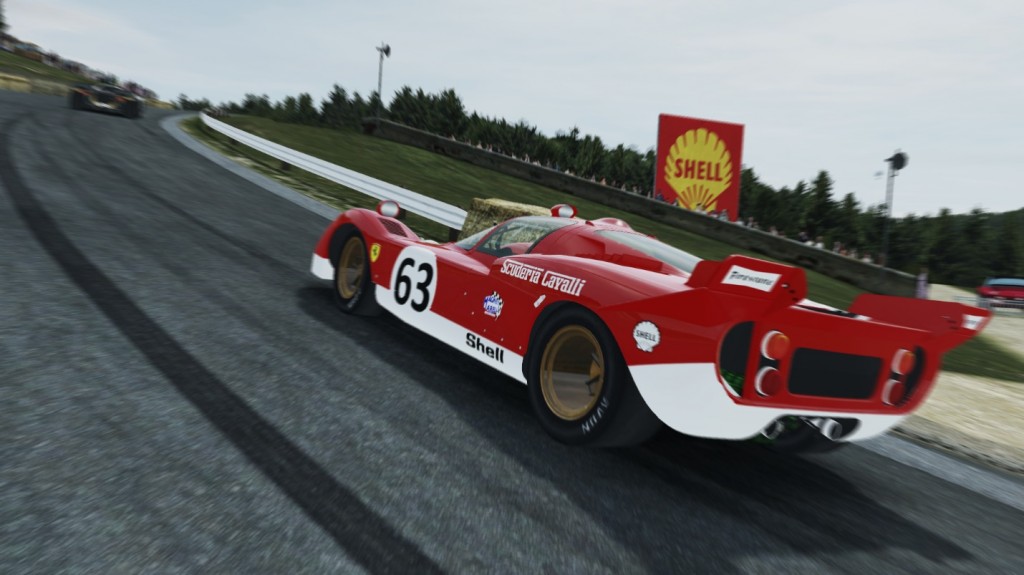 Angelidis chasing to catch up Boorman after the latter faced late problems.

In the end, it was el Idrissi in the Gasoline Aftershave Ferrari (Pro) that took the win, with a “foul mood” Boorman taking 2nd overall and first in Purist class.

George Angelidis (Purist) completes the overall podium and 2nd in class while Wayne Hutchison survived with his steady pace to take the honors in Am and 4th overall!

Ross Smith would come to finish 3rd in class recovering a whole 5 laps after the Abdalla accident saving some good points for the n00n Racing team.

The Gasoline Aftershave Bros. (Pro) Ferrari team had given a truly outstanding demonstration of long-distance racing, with a perfectly prepared car that did not suffer from a single fault, team control and race running that was an example to all, and pit-work by the mechanics that was perfection at every stop.

At the end of the race-winning driver el Idrissi was spotted at the paddock spraying Gasoline Aftershave much to the amusement of fans.

Good weekend for the Rookie Monsters Porsche in Purist class and with Abdalla having 3 DNFs and 1 win, his stay at Scuderia (Purist) is not proven to be the pleasant experience he had in mind.

The Tifosi would welcome a combatant Angelidis though taking 2nd place and now ahead of Abdalla in the Championship to the surprise of many.

A weekend to forget for Storm Rider Racing (Pro) and n00n Racing (Purist) Lolas albeit Ross Smith’s heroics to recover an amazing 3rd becoming the “revelation of the year” across the paddock in skill and spirit.

6 cars crossed the finish line in a race of high attrition and many accidents. 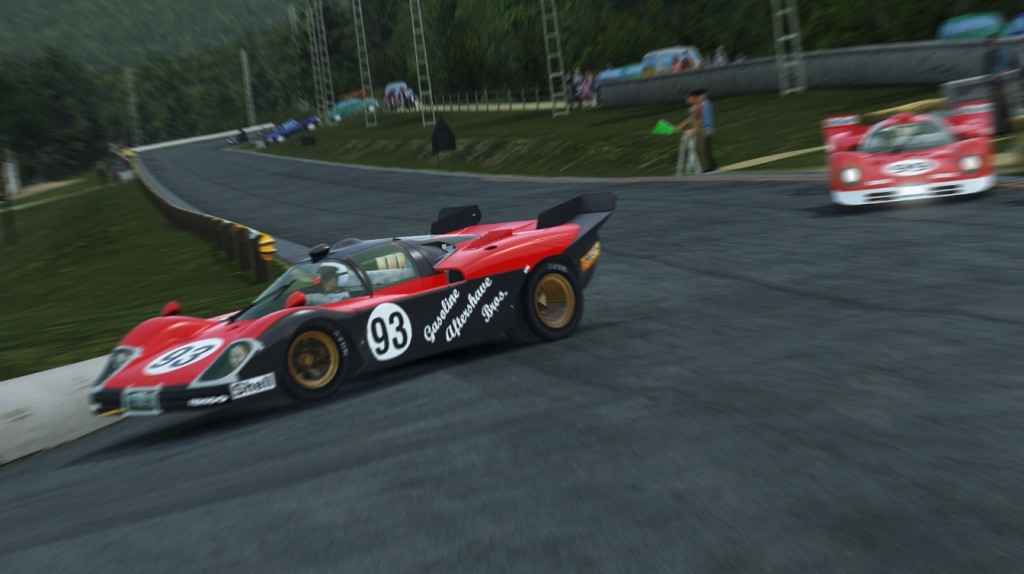 With two weeks before the blue-ribband event, the racing circus is excited for the 2.4 Hours of Le Mans, a race that every sportscar driver wants to win…