One race this week – the Greyhound Rescue 150 at the Daytona NASCAR road course to close out the series.  The first stock car series in rF2 for CMS, the mix of road and oval courses made for entertaining racing.  Big shout out to Matt Sentell for the updated stock car plugin for rF2, which brought some real-world flagging to our oval races as well as some sage advice from the drivers and administrators over at StockCarSimRacing.com on setting up for stock car racing!

It was no surprise when the overall series leader, Eduardo Beninca claimed pole position with a 1:49.056, almost a full second over his closest rival, Zander Tallman.  Brendan McVeigh was the polesitter for the AM class, 7th overall with a 1:51.914.

The combination of full-on road course in the infield and then the high speed banking of the NASCAR oval is the ultimate challenge for the SC2018X cars.  This meant some exciting moments as the drivers through their unwieldy mounts around track, with well over half finishing on the lead lap and only one retirement.  It was not all smooth running however; T1 and the chicanes proved to be tricky for many drivers, with spotter calls about cars in trouble the long of the race to keep everyone on their toes.

JT Tami took a consistant and fast race to claim the PRO and overall win from a P5 start with Jason Whited pushing hard to catch him throughout the race.  Ross Smith had similar success, taking his P11 start to a P8 finish and the AM win along with the AM Hard Charger points.  Overall, 4 drivers led the race at one point or another, with JT Tami , Jason Whited, Eduardo Beninca and Zander Tallman each gaining a point for their championship standings.

Drive of the night came from PRO Pedro Crulas Gomes, who came from the back of the field to claim P3 by race end, having jumped up 10 places in the first 2 laps.  In addition to his third place points, he also took home the PRO Hard Charger points.

With the series now finished, the podium standing are as follows:

Honorable Mention goes to Ross Smith who finished just 3 points of the AM podium, and a Special Mention to CMS Owner David Anderson, who operated the pace car for the first two races of the series! 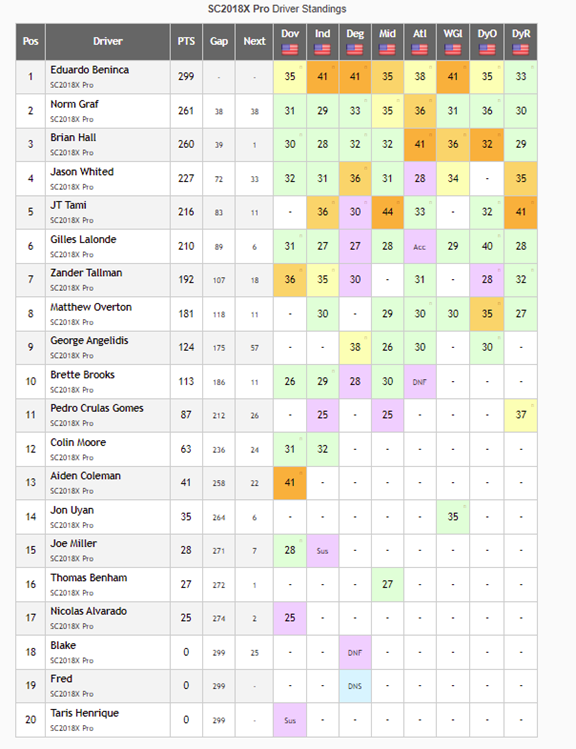 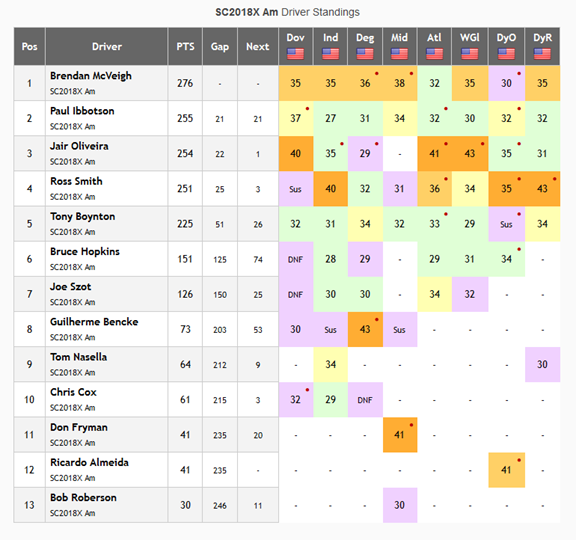 Big THANK YOU to the 33 drivers that came out to be part of the series!

Next week features a return to the WSC 1991 series for the MNRL at Suzuka while NARS visits Sebring for the third race of their WSC 2022 series.