April 22, 2020 – As with last week’s race at the Historic Barcelona layout, this week the TCR/MX-5 Series would take a trip back in time to the 2008 layout of Silverstone’s Grand Prix circuit for a 30-minute duel in the sun.

With 7 TCR entries and 10 Mazdas, things were shaping up where qualifying would be very important as always, and Turn 1 a high-speed bend that would cause some to lose, and others to gain. In the MX-5 class, Justin Hess would grab the pole with a very impressive 2:11.479, and in the TCR class, it was Brian Szabelski on top again with a 2:00.281 lap, more than a second over the second-place qualifier.

The start was clean, but positions were definitely gained and lost between Turns 1 and 6, and upfront Szabelski would lead lap 1 with Dave Slee moving up to second and David Shutt up to third from his 5th starting spot. By the end of Lap 2, Szabelski was back in 5th while Liam Park would take the lead with Shutt not far behind. Lap 6 would see Shutt take the lead from Park and pull away for the remainder of the 15-lap race, taking the win by just over 8 seconds. JT Tami also worked up through the field and passed Park to grab the second spot and Park finishing in third only a second behind.

In the MX-5 class, Hess would find himself hounded by Kurt Polter early until Lap 11 when Hess would stretch out his lead enough to take the win, his 3rd of the season. Polter would take a convincing second place finish, and in third Samuel Scott again taking another podium spot this season.

After 6 races, the Driver’s Championships are close in both classes, with one dropped result calculated in.

The MX-5 class is led by Kurt Polter, with Samuel Scott in second place seven points back, with Drew Lidkea, Peter Hebron and Kenny Rodriguez in a very tight battle for third.

In the TCR class, Brian Szabelski sits atop the standings with Liam Park eight points behind in second place, JT Tami in third only one point back, and Miguel Antonio Alcrudo in fourth, another single point behind Tami, with David Slee rounding out the Top 5.

The next race in this series will be May 6th at the beautiful Brands Hatch Circuit – Full Course. With only four races to go, it’s anybody’s Championship! 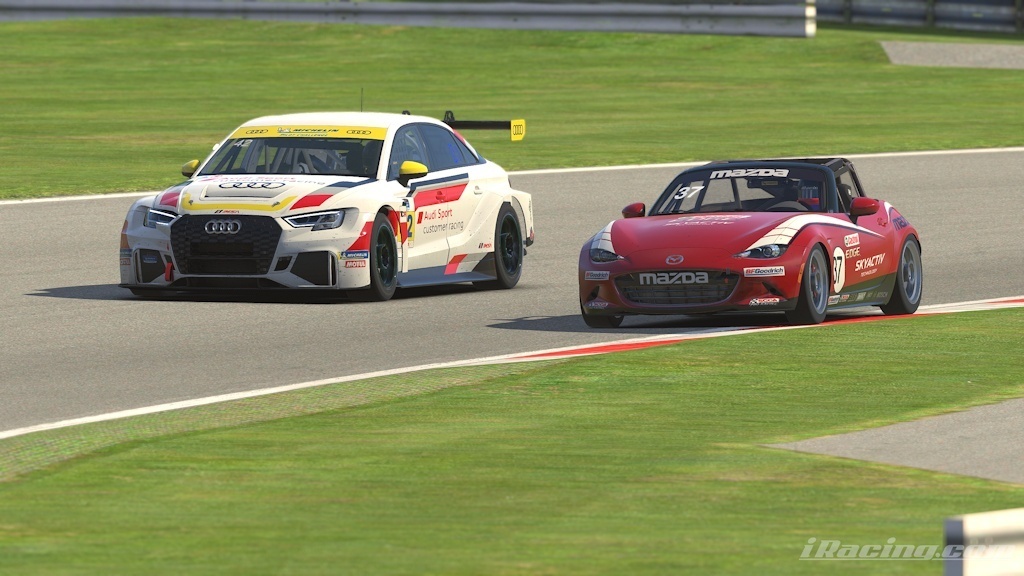