October 22, 2020 – The Weathertech Laguna Seca is always an exciting track with drivers constantly busy in their own races and then with the challenges presented by multi-class racing on a tight track. The warm and dry weather did not add to the difficulties of the day, but this did not mean that this race did not have its dramas, all of which contributed to some interesting developments in the series standings.

In total, 21 drivers (8 LMP and 13 GTE) took the green, though only 15 finished the race to see the chequered flag. Some aggressive racing, occasional driver error, and some unexpected difficulties in the pit lane all contributed to dashing the hopes of several championship contenders.

None of these difficulties affected JT Tami however, as he powered his way to yet another LMP2 and overall race win, outlasting polesitter Cameron Sansano who was required to withdraw due to damage. Colin Moore secured second place with a strong run 39s back and in third, his first podium of the series was Matthew Overton, who also took the LMPC honors over Bob Robertson. Suffering significant damage, Jason Whited was another notable LMP2 retirement early in the race.

The GTE PRO class remained the most closely contested class of the race, with damage to George Angelidis late in the race resulting in a fall to 3rd place. Don Fryman took advantage of another win as a result, despite a drive-through penalty, leading Jerry Chen over the line by a mere 4s. Thomas DiLibero took top honors in GTE AM on the strength of a convincing 24s gap over Vincius Goncalves with Paul Ibbotson securing the final podium position a further 50s behind. Both series AM leader Ross Smith and PRO 2nd place contender Jon Uyan suffered issues late in the race, dropping each out of podium positions.

For GTE Pro, Fryman remains the front runner, however, Chen moves into 2nd with a slim 3 point lead over Uyan. Close behind, Angelidis is challenging for the final championship podium position just 6 points out. With his race win, DiLibero has closed down to 13 points his gap to GTE AM series leader Ross. The battle for 3rd has also tightened, with Ibbotson now only 5 points shy of Tom Nasella, who did not run at Laguna Seca.

The next stop, the penultimate race for the season, will be at Sebring on 5 November, with 1.2 hours of racing both day and night! 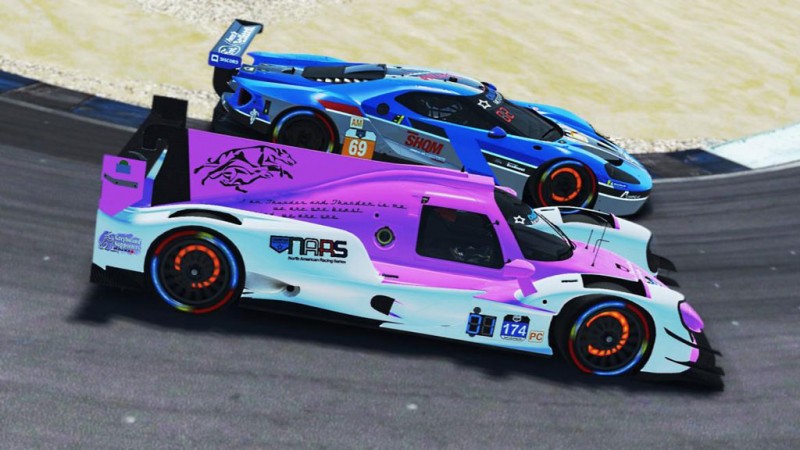