NARS – VTDMC Round 3 at Lausitzring 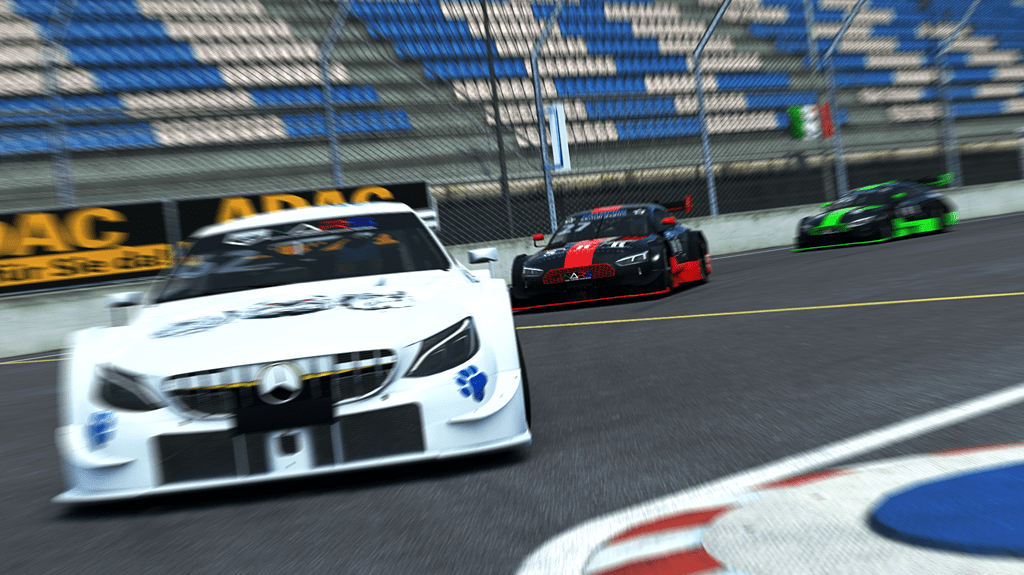 February 11, 2021 – This week, the drivers of the NARS VDTMC made the pilgrimage to the European center of automotive testing, the DEKRA facility at Lausitz, to show their manufacturers how well they could extract performance from their cars on a track the manufacturers themselves know so very well.

The weather, while generally overcast, in the end, provided excellent conditions for the race, which saw plenty of action from the 8 PRO and 11 AM drivers that lined up on the starting grid.

While a number of drivers opted to skip this stop, the field welcomed warmly four new drivers to grid – familiar face Tony Boynton and NARS newcomers John Maher, Chris Cox, and Cedric Collins, all in the AM category.

Qualifying was intense, with some great times being set during the session however it was PRO driver Ahmed Abdallah that again proved to be THE driver to be beaten with a blistering 1:37.122 to take pole well over a full second ahead of his closest challenger, Norm Graf who only narrowly edged out Jon Uyan.

In AM, Matthew Overton delivered a 1:38.748, good enough for 4th on the grid with John Maher .5s behind and 8th overall.

With the stern warnings of the stewards about jump starts from the Norisring race still ringing in their ears, the drivers ensured that this time there would be no questions as they rolled smoothly across the start line from the formation lap.

The orderly start quickly descended into a bit of chaos, however, as both Abdallah and Graf struggled with the turn-in for T1 and headed off-track as a result.

With quick reactions from the following drivers, what could have been a series of race-ending collisions were avoided cleanly, despite one of the leading cars ending up broadside on the track. Both drivers were able to get themselves back into the race relatively quickly, with Abdallah suffering the worst of it, dropping almost completely to the back of the field.

T1 proved to be the bane for Abdallah again later in the race, when having driven hard and recovered to 7th place, another spin and then a trip to the pits for his mandatory stop put him back at 10th.

Upfront, Jon Uyan, and JT Tami were in a thrilling battle for the lead of the race through to the pit cycle and into second stints, with Brian Hall and Norm Graf close behind.

An unexpected blown engine for Uyan had the effect of putting an end to the drama for the overall and PRO class win, however, a hard-charging Abdallah managed to move through the field and close to within 10s of race winner Tami, despite his problems throughout the race.

Graf and Hall maintained a spirited battle within seconds of each other to the chequered flag, with Graf taking 3rd place a mere .5s ahead of his rival.

On the AM side, a sweep of the pole, race win, and fastest lap in class made for a very satisfying victory for Overton, who had to overcome 2 drive-through penalties and damage incurred early in the race.

The strong performance of newcomer Maher however, finishing 2nd in class and only 11s back may be an indication that both Overton and series leader Rodger Gabryszak, who sat out the Lausitzring event, will have to watch him closely.

This, in addition to Ross Smith, who with his third consecutive 3rd place finish, is consistently threatening to move up the AM podium.

While there was significant movement up and down the order throughout the race, it was race winner JT Tami who claimed the “top mover” honors at Lausitzring, gaining 5 positions to finish P1 from his P6 on the starting grid, one better than the 4 places gained by Ross Smith.

The last word on the race went to Maures CEO and avid VDTMC fan, Frederich Doppelganger, who when asked about the fact that it was two Maures cars that finished top of a grid dominated by rival manufacturer Aura, remarked that “superior engineering rises to the top through quality, not quantity, as is natural”.

With three rounds complete, the standings at the top of the VDTMC (drop round applied) are:

The next VDTMC round will be February 25th at Zolder.