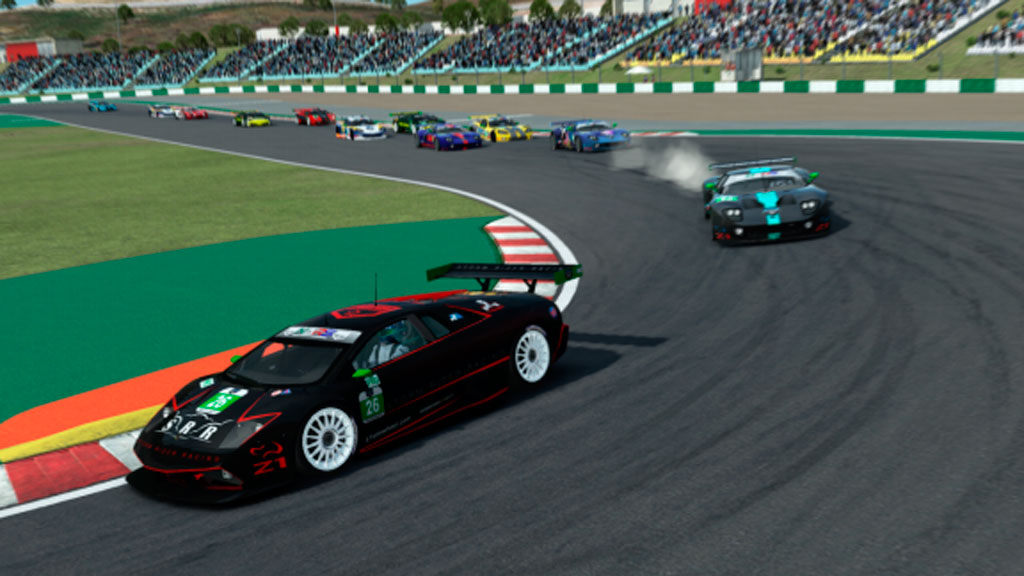 August 5, 2021 – It was a fast and furious return for the drivers and teams of the CMS VGT1 Championship after more than a month’s break in the action. Portugal and the undulating Algarve circuit provided the ideal venue for a return to action with championship battles rejoined with enthusiasm. 22 drivers made the trip to Portimao for the weekend, with AM driver Danny Corriveau of Dark Thunder Racing a noticeable absence and a severe blow for both his championship chances and DTR’s hopes to get out of the team championship basement. Drivers and fans were very pleased to have almost ideal conditions for the race weekend with sunny skies and light breezes, meaning that drivers were able to extract the maximum from themselves and their cars as the track rubber matured.

While Ford was looking for another dominating performance to follow up their showing at Sachsenring and got it except for the gauntlet thrown down by PRO Jason Whited in his Storm Rider Racing Lamborghini Murcielago and his 1:35.694 to grab the pole over a pack of North American cars. While the Ford GTs of Michael Parker, Daniel Kirby, and Eduardo Beninca was hot in his heels, they could not match the pace and had to look to the race to better Whited. In AM, it was Paul Ibbotson setting the pace with a 1:36.835 in the V.I.C.E Lamborghini, with the Corvette C6.R of Lanny Hall a half-second behind and Thomas DiLibero’s Maserati MC12 for Maserati Corse just behind. 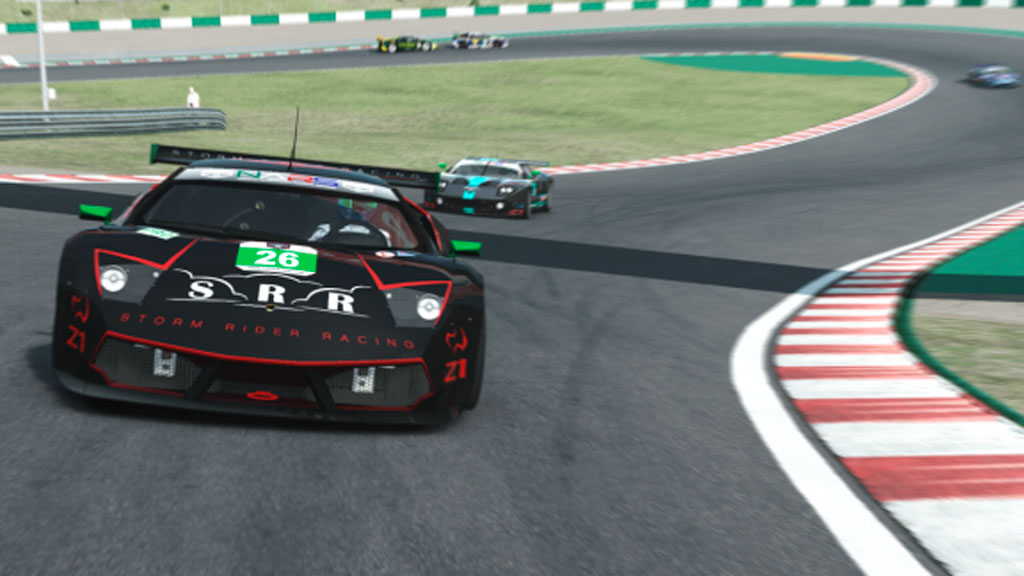 While qualifying had shown the drivers were ready for race pace, the opening lap provided plenty of proof that there was some rust that needed to be worked off when it came to close-quarter racing. The rolling start found several drivers caught off guard or in the wrong gear at the wave of the green flag and the high-speed T1 saw lots of contacts, with lost positions in both PRO and AM, the most dramatic being the spin of AM driver John Maher.

Things became calmer as the pack began to string out however there was still a significant amount of contact as drivers battled for position on the tight track that offers few really quality opportunities for passing. The slower, climbing corners were often the scenes of locked brakes and sudden veering as drivers struggled for line and speed between cars of significantly different capability. There was also a wide variety of tire strategies in play, making it even more difficult for drivers to judge the capabilities of the competitors throughout the race.

In the front, Whited had all he could handle in keeping Parker behind him until L3, when Parker, having overtaken Whited when he went wide on T1, lost the rear end heavily as he crested T4 and fell back to P18 in the race. From there, Beninca kept the race leader doggedly in sight until Whited pitted at mid-race in an undercut that gained him several seconds once Beninca exited the pit 2 laps later. It was Dan Kirby however, that was the virtual race leader at that point by almost 2 seconds, becoming the outright leader on L30 and holding on until worn tires forced him to cede the lead back to Whited, with Beninca passing him for P2 on L36. A fine recovery drive after a spin very early in the race meant that PRO JT Tami in his Corvette C6.R claimed P3 on the last lap against a fading Kirby who had to make a late ‘splash and dash’, a very unsatisfying result for what had been a scintillating drive.

In AM, Ibbotson was the driver of the race, contesting positions with the mid-pack of PRO and leaving his AM competitors further and further behind. Jimmy Regan earned the P2 in class, outlasting John Maher who had a late pit on L35, enabling both Regan and then David Anderson to pass, leaving the unlucky Maher in P4. 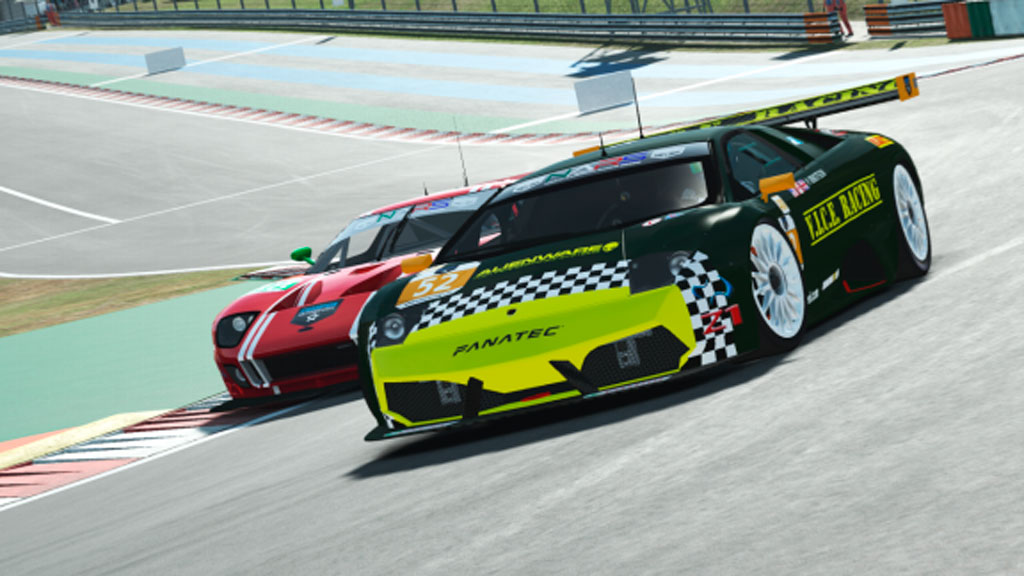 If there had been any doubts about the strengthening form of Storm Rider Racing and their challenge for a podium position in the team championship and the capability of AM driver Paul Ibbotson to make a serious run at winning the AM driver championship, the Algarve weekend banished them with authority. While B & M Racing has pretty much locked up the team championship with their 98 point lead and only 3 races left, both V.I.C.E and Hall Brothers Racing must now be looking at themselves seriously as to what they must do if they wish to keep SRR behind them. The same must be true for John Maher, whose recent run of bad luck is holding open a door that Ibbotson is charging towards at full speed.

Amongst the constructors, the Ford representatives are still the most relaxed of the manufacturers and enjoying the VGT1C results the most, but Lamborghini has much to be pleased with from the last couple of races and given the style of tracks to come, may have the most to look forward to in the coming weeks!

Speaking of the schedule, the next race will be held on August 19th and will feature the unique venue of Enna Pergusa. Qualifying at 9 PM Eastern and Race at 9:30 PM, see you there! 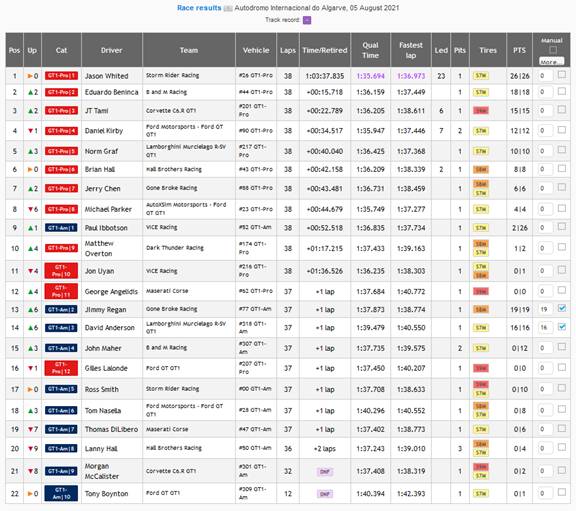 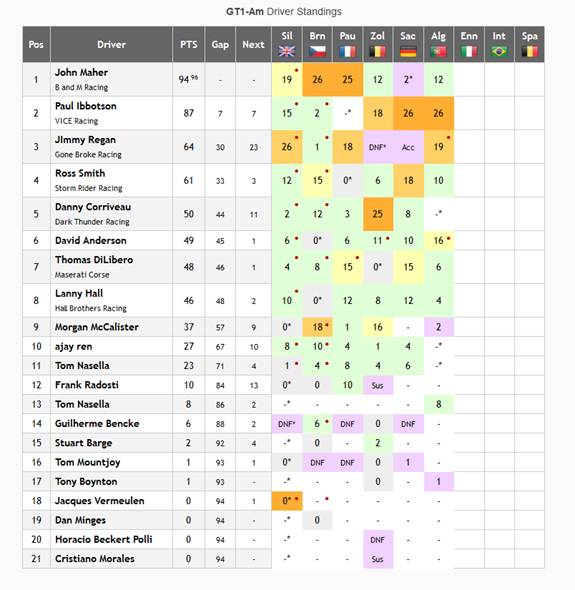 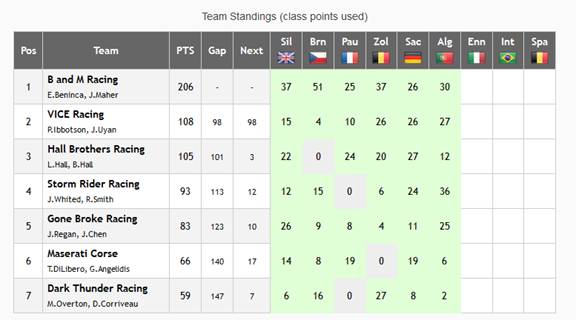