NARS Virtual GT1 Championship Round 5 – 60 Minutes of the Sachsenring 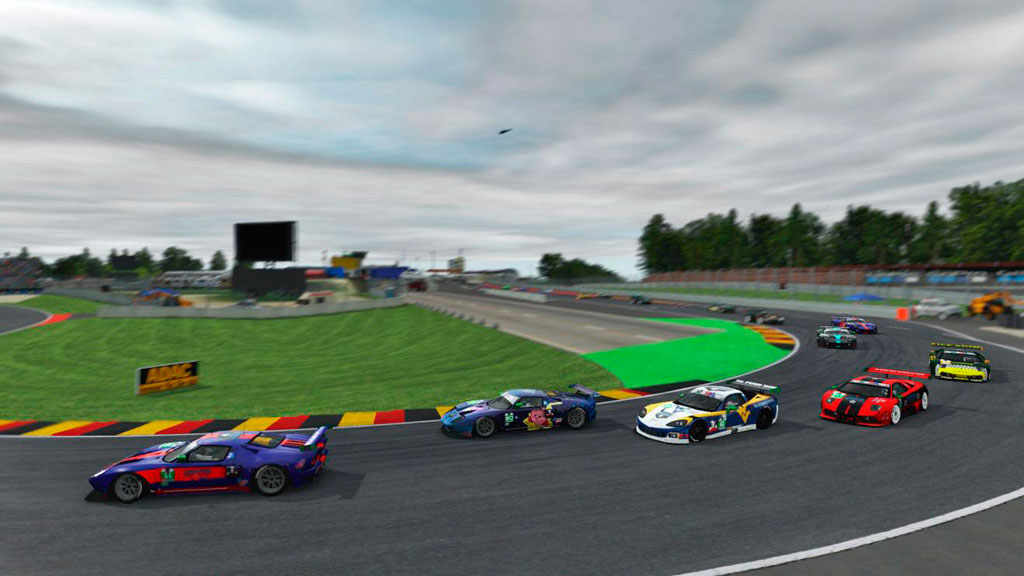 June 24, 2021 – It was with a sense of expectation and curiosity that the NARS VGT1 Championship teams and drivers arrived at the picturesque Saxony countryside for the Sachsenring racing weekend. With almost none of the drivers have had any experience on this tight, weaving ‘rollercoaster’ of a track more often used for motorcycle racing, chances were good for some upsets in the standings. With 24 drivers on the shortest track of the season, there was no concern in the paddock that drivers would be ‘losing focus’!

The weather throughout the week was overcast with frequent bouts of rain that had every team scrambling to get the most out of the practice sessions to settle both car and driver on the optimum setups and lines for both dry and wet conditions. While the final practice before qualifying started under wet conditions, but the time qualifying had started, the track had been well dried out and stayed that way for the race although rain threatened in the closing laps.

It was North American-equipped teams that dominated the 15 minutes of qualifying, with the B&M Racing Ford GT of Eduardo Beninca taking another pole position in the series, followed by Dan Kirby in a privateer Ford and then Brian Hall piloting his Hall Brothers Corvette C6.R to third on the grid.

Euro fans had something to cheer about however as Paul Ibbotson took his V.I.C.E. Racing – Lamborghini Murcielago R-SV to the top of the AM field. His 1:15.405 less than a second behind Beninca’s 1:14.416 and hard on the heels of another Murcielago driven by Norm Graf, 4th on the grid. Rounding out the AM top three were Beninca’s teammate, John Maher in his Ford GT, and then the Storm Rider Racing Lamborghini driven by Ross Smith. 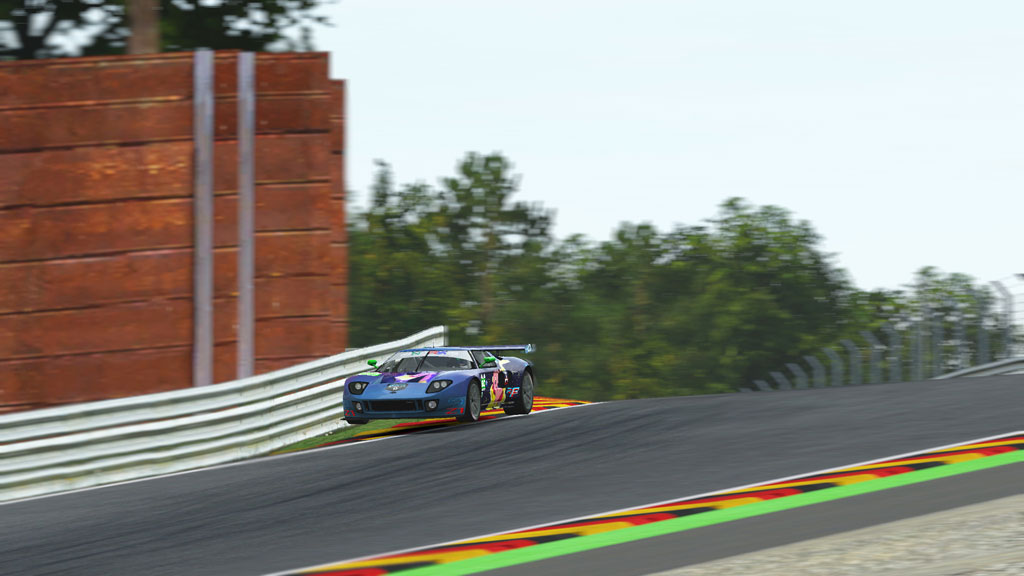 Beninca kept the field closely packed for the formation lap, racing away at the green lights to clear the hard hairpin at T1 in good order. Despite the tight nature of the circuit, the following field got stuck into the racing in good order, and to everyone’s surprise, no incidents through the Orange Zone lap.

From start to finish, the race saw multiple packs of cars contesting positions with little regard for PRO or AM status.  With such tight racing, even small mistakes resulted in significant positions lost, with PRO Michael Parker and then AM John Maher moving down the order significantly on successive laps.  PRO JT Tami was to suffer a similar fate when after a spin he struggled to regain traction from overheated tires and also fell well down the order.

No such worries for the front runners, however, as PROs Beninca, Kirby, and Hall along with AM Ibbotson put a gap between themselves and the rest of the field through the first stint.  Behind them was a pack of about 6-7 cars including PROs Vermeulen, Graf, Whited, George Angelidis, Jerry Chen and Matthew Overton with AMs Ross Smith and Lanny Hall in the mix.  Over the course of the race, this group was whittled as Vermeulen drew away and Graf, Overton and Hall dropped off the pace.  It was particularly difficult for Graf as he had moved clear into 5th overall, only to run out of fuel on the uphill climb to the finish on the last lap. 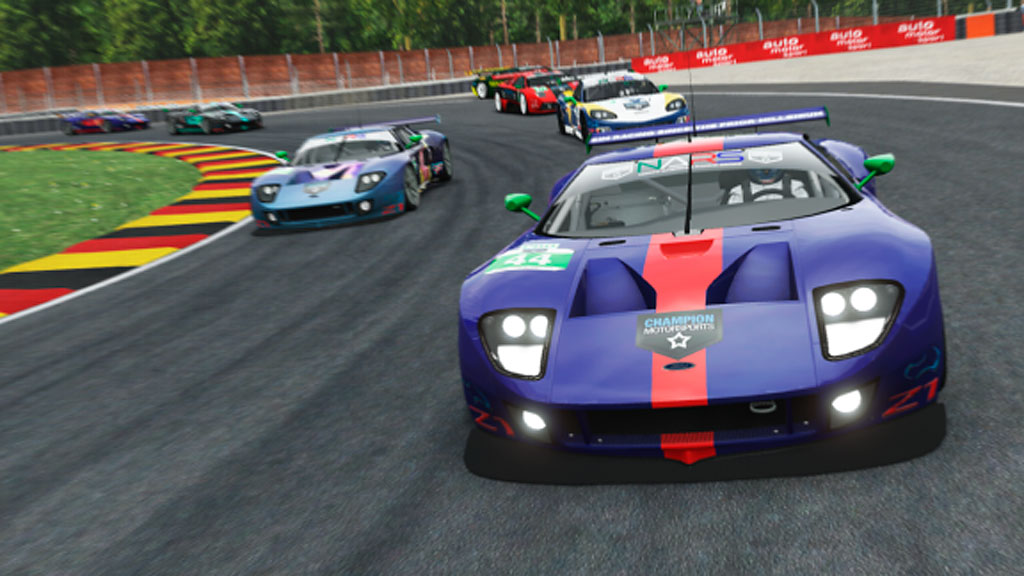 At the checkered flag, the top three PROs had maintained their starting order – Beninca with a well-deserved win followed by Kirby and Brian Hall.  In AM, the finishing order saw a considerable shakeup, for while Ibbotson was able to lead the class to the chequered flag, Ross Smith and Thomas DiLibero were able to capitalize on errors by their competitors to take the 2nd and 3rd place podium places respectively.

Also taking advantage of the tight track, which seems to suit him very well, was PRO Jerry Chen who took his start from 16th on the grid to a P6 finish, a climb of 10 positions, and enough to earn him the “Hard Charger” championship point.

There was no doubt among the fans that Sachsenring had produced a full hour’s worth of action and fully deserved to be kept as an exciting possibility for future racing in NARS. For the drivers, however, the sweat-filled hour produced a range of reactions – from “My gawd I’ve got a new hated track” to “Now one of my favorite tracks! SUPER technical!”. In terms of results, it was Storm Rider Racing that had the most reason to be pleased with the track – their P8 and P9 finish being their best of the season and perhaps the foreshadowing of more to come.

There was a real buzz of excitement from the departing crowds over what impact the coming into form of PRO privateer Jacques Vermeulen and VICE Racing’s AM driver Paul Ibbotson could have on the championships. For the several leading drivers struggling to maintain their positions, the pressure just got a little bit higher for them to “get back on track”, so to speak, for the second half of the season.

The Ford and Chevrolet regional representatives also left the circuit abuzz, as their cars dominated the top 7 places in the race, finding only the VICE Racing Lamborghini of Ibbotson at 4th to break up the North American love affair with Sachsenring. It is certain that the other manufacturers will be working closely with their sponsored teams to have a more “Euro-friendly” result in the next round! 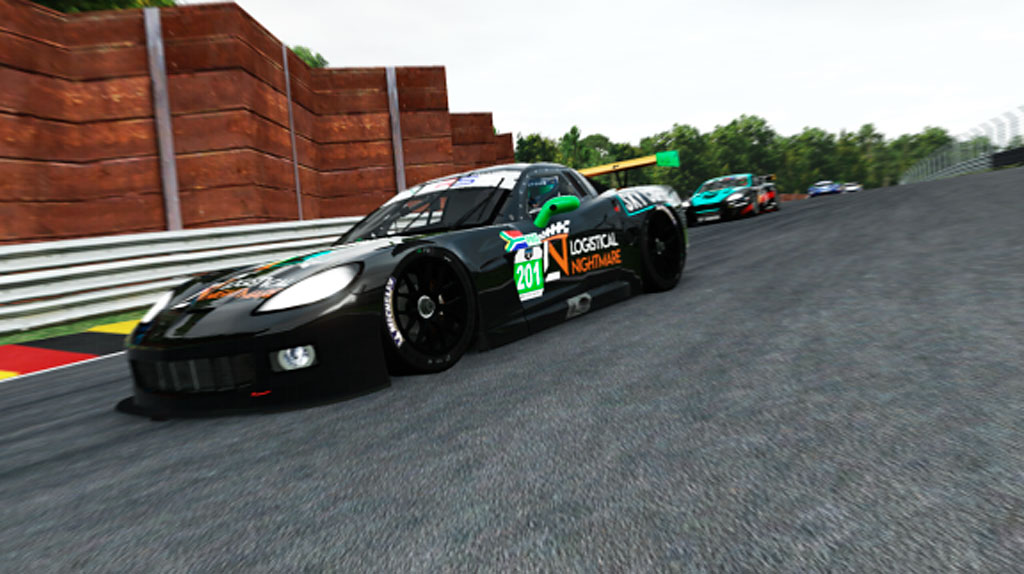 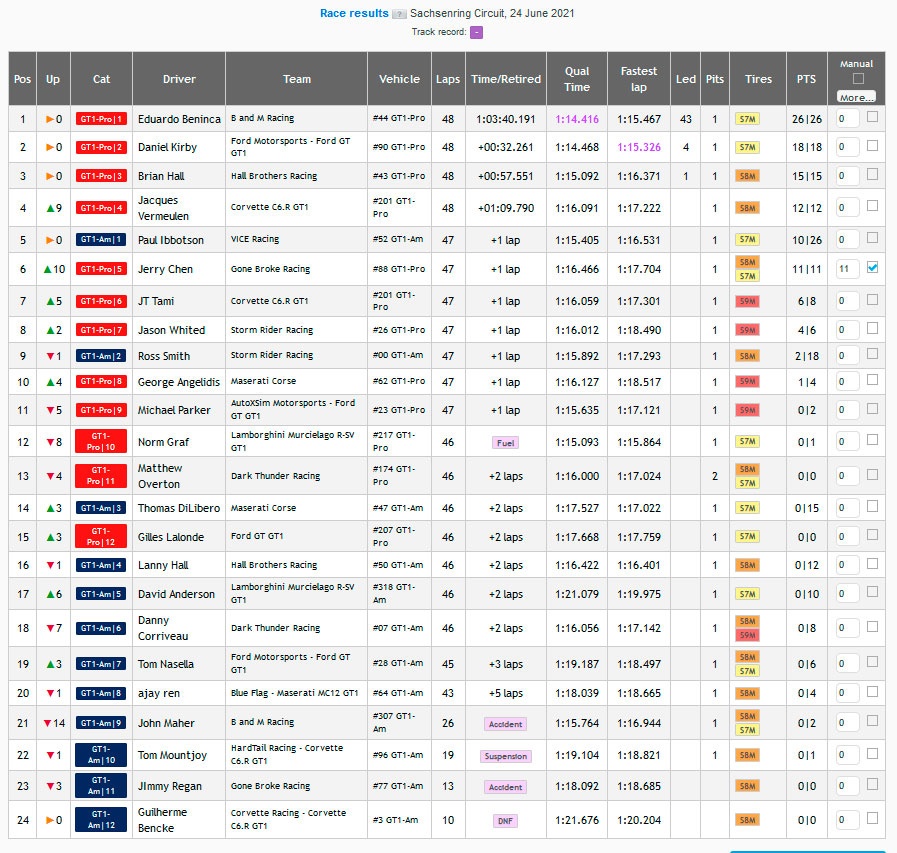 PRO: A second win in a row meant some breathing room for Eduardo Beninca over Dan Kirby as he stretched his PRO championship lead to 11 points. Michael Parker’s continuing struggles opened the door to Brian Hall for 3rd in the standings with JT Tami now only 3 points behind the 4th place Parker. 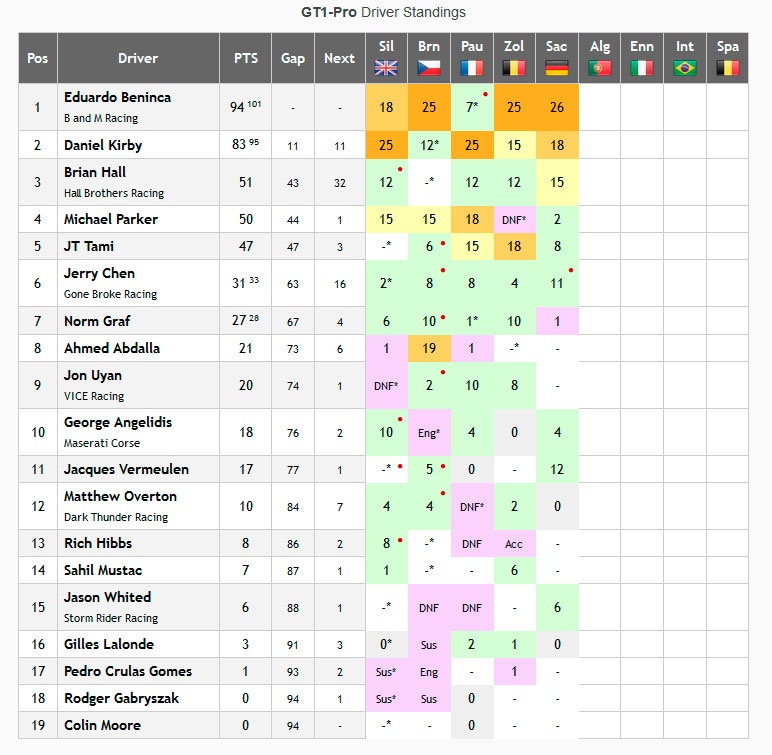 AM: John Maher continues to hold a strong lead in the AM drivers championship, however, his off-the-podium finish meant that he missed his chance to maximize his advantage over Jimmy Regan, who recorded a DNF. Danny Corriveau now lies third over Morgan McCalister thanks to his win at Zolder and is now only 5 points behind Regan.

While John Maher continues to hold a substantial lead in the AM standings, his poorest result of the season has tightened the race.  Race winner Paul Ibbotson catapulted to 2nd overall with his emphatic victory, bypassing Jimmy Regan, Danny Corriveau, and Morgan McCalister in the process.  Ross Smith also jumped up 3 places to now stand 3rd overall by 3 points over Corriveau. 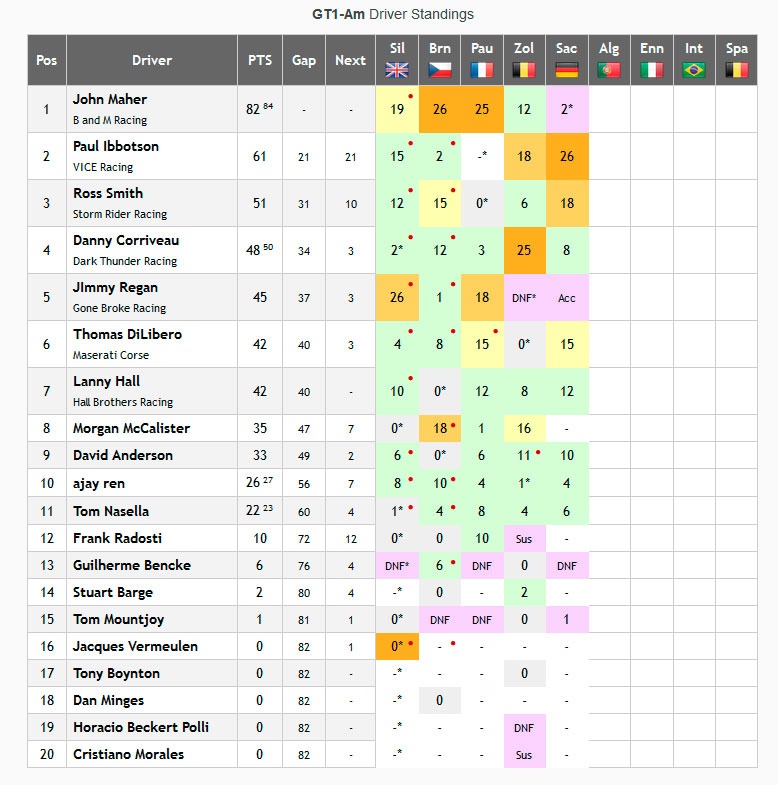 TEAM: Even with an uneven result, B&M Racing was able to stretch further their commanding lead, to sit 83 points over 2nd place Hall Brothers Racing. While Gone Broke Racing was able to muster a better showing this week than in Zolder, it was not enough to prevent V.I.C.E Racing and Maserati Corse from moving ahead of them in the team championship to stand 3rd and 4th respectively.  Storm Rider Racing enjoyed a result that was more in keeping with their expectations, but their slow start to the season means that they have a great deal of ground to cover before thinking of competing for a podium position. 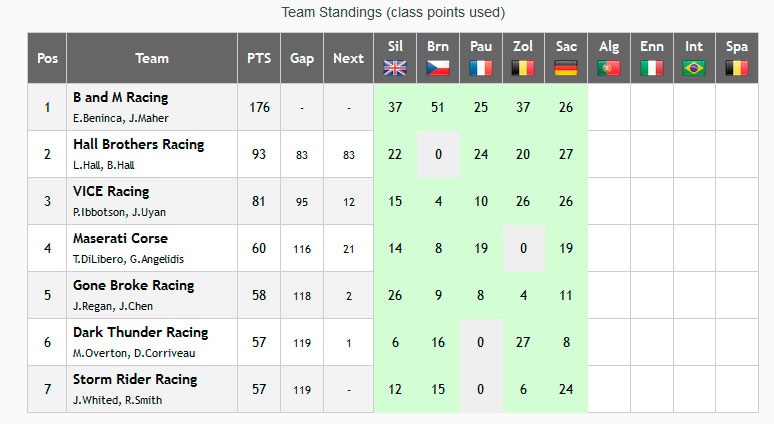 At the Mid-Season Break

July means a summer break for the VGT1C and while there is to be no racing, it is unlikely that the teams will be heading to the beach as they have work to do!

In both Drivers Championships, there are some fierce rivalries brewing in the midfield with podium positions still far from decided.  This is starting to have an impact on the team championship, where B&M is finding it harder to get the impressive point counts that they achieved in the early races of the season as their competitors start delivering stronger race results, particularly the privateers in PRO.  While the top podium position may be a bridge too far for their closest competitors, Hall Brothers Racing, the continually improving V.I.C.E Racing, Maserati Corse, and even Storm Rider Racing will have the brothers watching their rearview mirrors closely as they work to safeguard their 2nd place standing.

The next race will be 5 August at Algarve, to be followed by the last three races at Enna Pegusa, Interlagos, and the finale, a 2.4 hr race at Spa on 9 Sep.