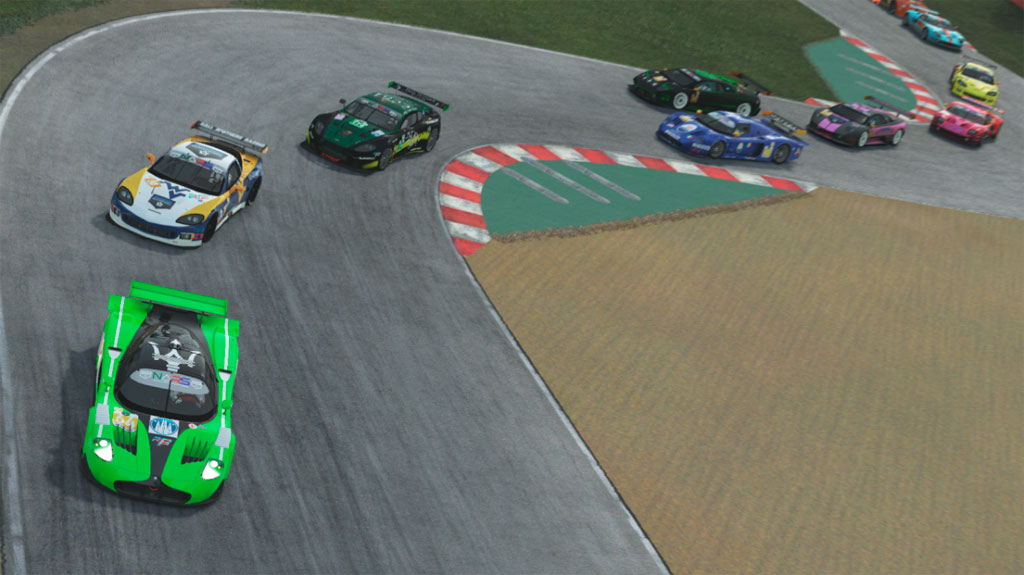 June 10, 2021 – From the warming breezes of southern France, the GT1 teams and drivers packed up and made their way back north to Belgium and the guaranteed excitement that comes from a race at Zolder. With another BoP laid upon the Ford GTs as the championship technical advisors grappled with how to deliver level racing potential across the field, the teams focused on their preparations.

The Belgian countryside and conditions proved as welcoming as the south of France, with dry and warm conditions from practice to race, giving the fans some great opportunities to see the drivers at their very best and very fastest on this demanding track. 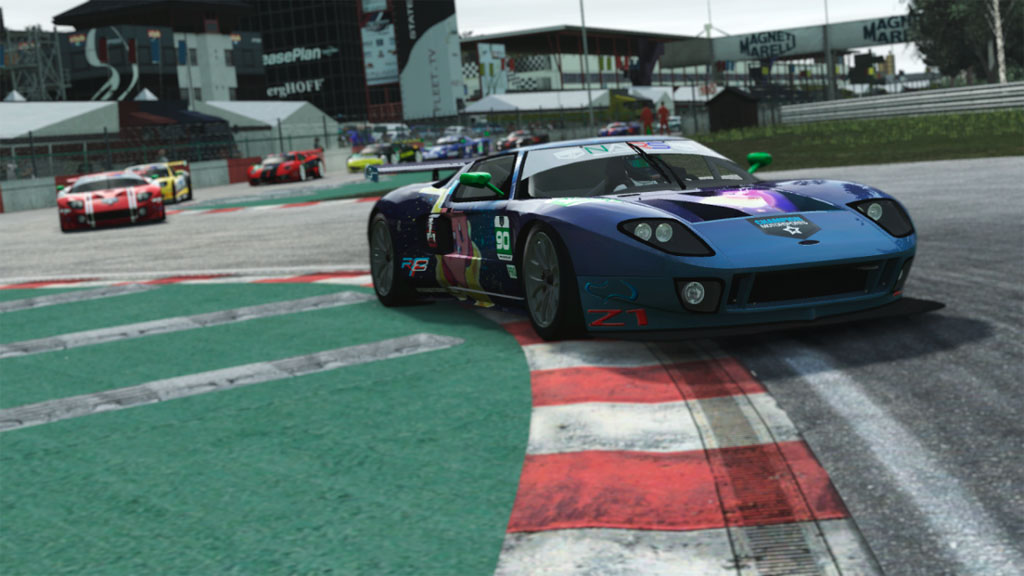 It was Maserati again at the top of the qualifying results, this time privateer Pedro Gomes with a time of 1:22.962, a full second ahead of Eduardo Beninca in his B&M Racing Ford GT. Brian Hall, third in qualifying in his Hall Brothers Racing Corvette C6.R was the only other non-Ford PRO driver of the top six. Morgan McCalister proved the Corvettes were going to be a force to be reckoned with, qualifying just behind Hall to take the AM pole only .2s ahead of the Aston Martin DBR9 driven by Danny Corriveau from Dark Thunder Racing. 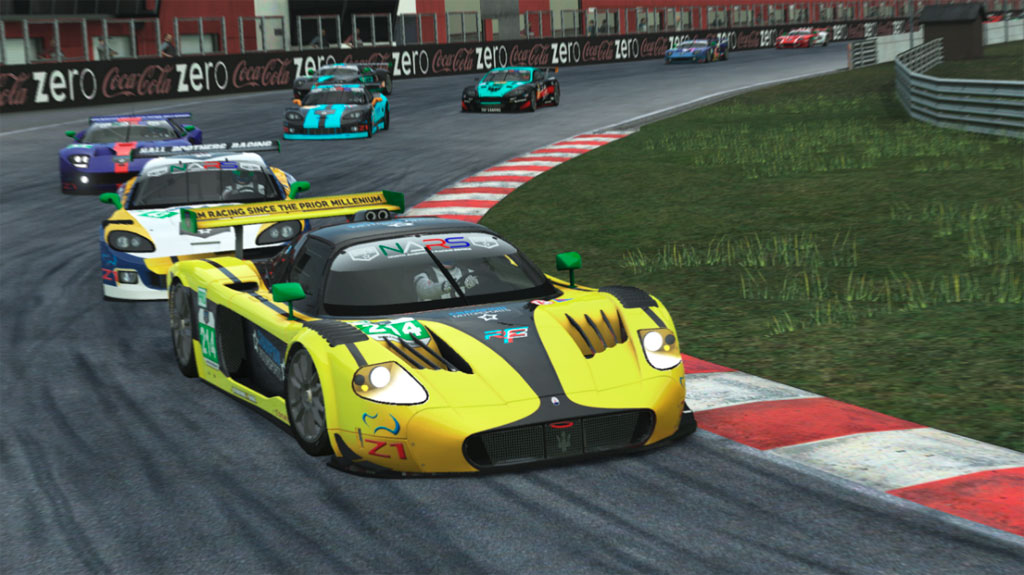 The tight and close racing that is characteristic of Zolder was quick to start taking its toll not long after the green flag waved. PRO Rich Hibbs, who had moved up to P11 in the first lap, lost control coming out of Lucienbianchibocht, ending up broadside and collecting fellow PROs George Angelidis and Gilles Lalonde who could not avoid him. As the field behind sorted itself out, Gomes showed a blistering early pace over Hall and Beninca as they battled over the course of several laps. Beninca who had lost second place early to Hall was finally able to get the measure the Corvette through the Kleine chicane. He then took over the lead from Gomes on L13 when the leader lost the rear end of the Maserati as he came up n a lapped car in Kanaalbocht, leading to his retirement due to heavy damage.

During the action at the front, the fans present were treated to a train of cars jockeying for position in the midfield as Micheal Parker, Daniel Kirby, Danny Corriveau, Brian Hall, and JT Tami raced to stay in podium contention. As the race wore on and pit strategies came into play, it was Tami and then Hall that led the race for periods until Beninca regained the lead on L32. While Parker faded after pitting, consistent driving put Corriveau into contention for 2nd place overall, but an off late in the race as he dealt with lapped traffic, put paid to those hopes although he managed to stay close to the podium through to the end of the race.

Throughout the field, there were a number of strong charges made during the course of the race, with Tom Nasella, Ross Smith, and Matthew Overton gaining 10 or more positions from their start and Paul Ibbotson gaining 12 to finish 7th overall and 2nd in AM. It was AM David Anderson however, that made the most impressive advance over the race, finishing 14 positions ahead of his grid location to claim 13th overall and P5 in class along with the “Hard Charger” award and the extra championship point that comes with it.

At the chequered flag, it was Beninca’s Ford claiming victory, with Kirby and Tami battling down to the wire, the Corvette beating the Ford to the line to give Tami P2 in class. In AM it was Corriveau’s Aston Martin – his first victory in NARS, followed by Ibbotson’s Lamborghini edging out McCalister’s Corvette by only a second. 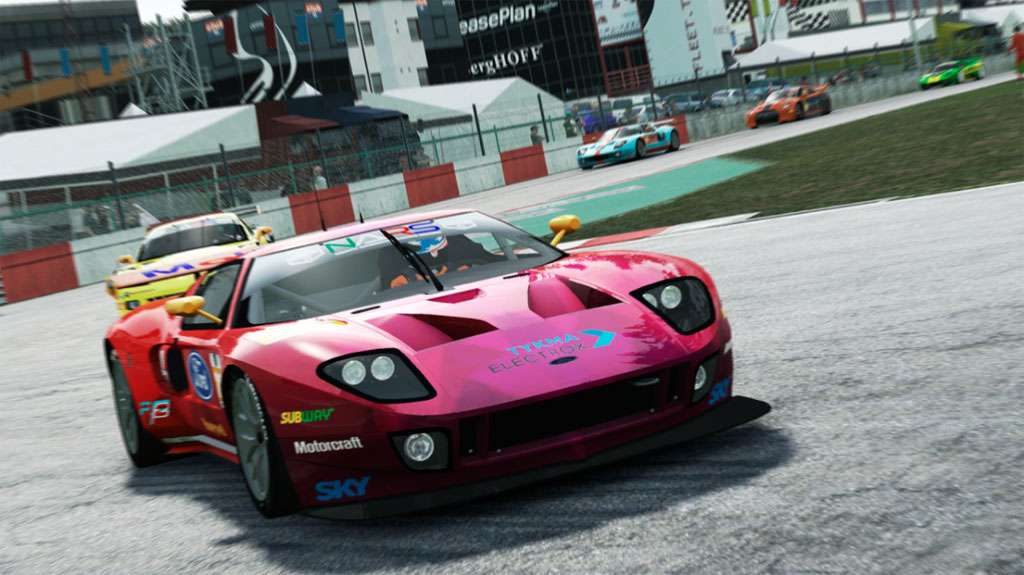 Zolder proved to be more than a handful for many drivers as they continue to work on not only mastering their cars around the varied circuits but also pit and tire strategy. With just one race left before the July break, there is certain to be some intense work by the drivers and crews to continue refining their cars in order to end the first half of the season on a high note.

The race organizers have indicated that there will be no additional BoP changes for the next race, although there may be consideration of it over the break. This has predictably left the paddock alive with discussions on the effect of the changes to date and whether or not they should stand or require additional adjustments. Time will tell.

All eyes will be on B&M Racing as the last couple of races provided significant hope to the rest of the field that their rocketing start to the season may last much longer. The AM driver competition is also generating a significant amount of interest, with Corriveau, Ibbotson, and McCalister all showing the skill and patience necessary to give current front runners Maher and Regan concern about their title hopes.

With the Sachsenring on the calendar for the next round on 17 June, a venue rarely visited by NARS, it may just be the time at which big changes occur! 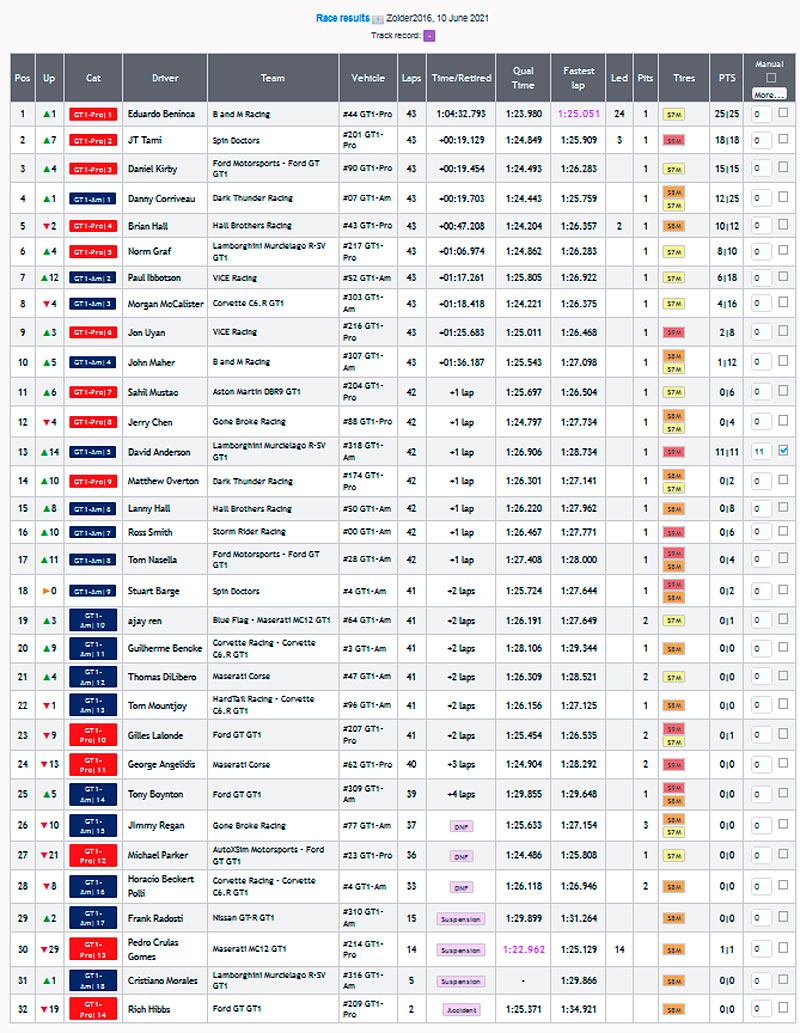 With his win at Zolder, Eduardo Beninca moves into the top position in the PRO championship ahead of Daniel Kirby by 3 points. Michael Parker’s DNF did him no favors as both JT Tami and Brian Hall made up ground in the fight for 3rd. 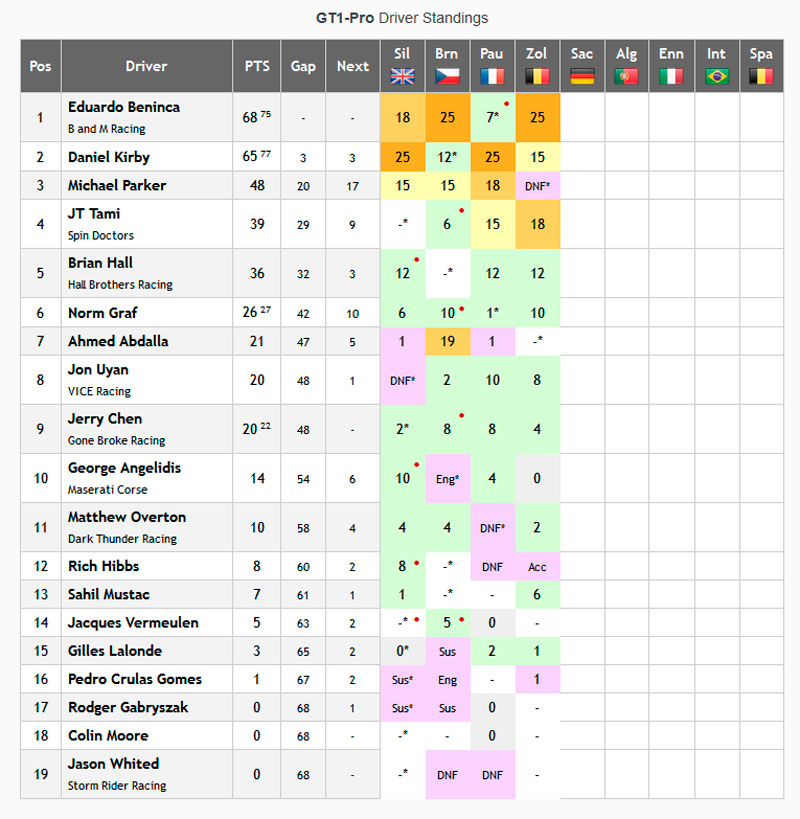 John Maher continues to hold a strong lead in the AM drivers championship, however, his off-the-podium finish meant that he missed his chance to maximize his advantage over Jimmy Regan, who recorded a DNF. Danny Corriveau now lies third over Morgan McCalister thanks to his win at Zolder and is now only 5 points behind Regan. 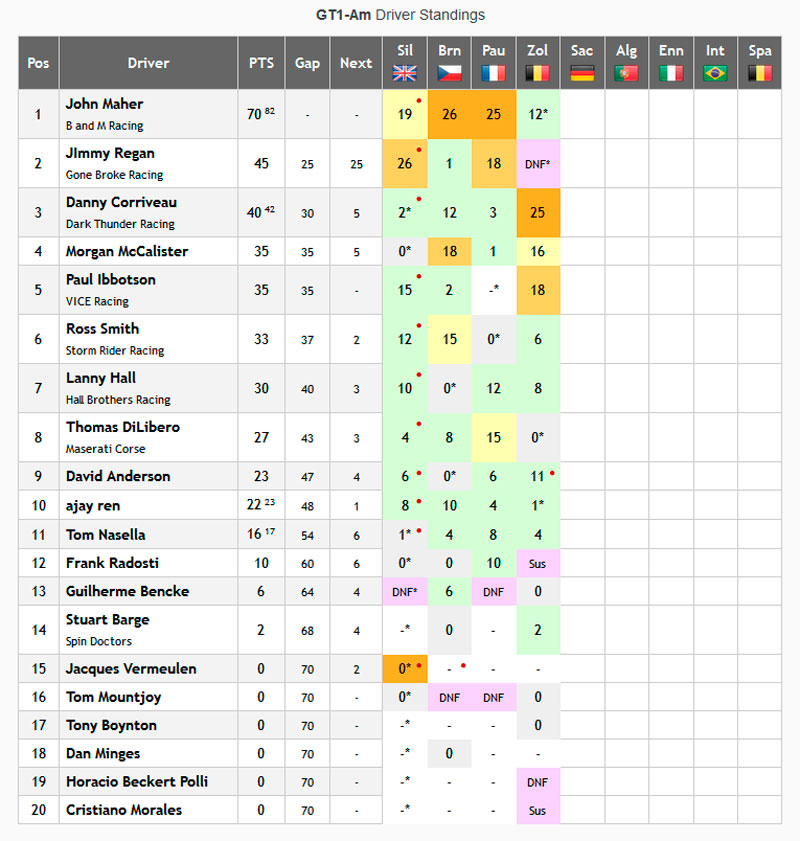 For the teams, B&M Racing continues to build upon their lead, unsurprising given their two drivers lead the individual championship tables. The fight for the rest of the podium, however, is starting to heat up, with Hall Brothers Racing pushing into second place, 2 points ahead of Gone Broke Racing and V.I.C.E Racing only 11 points further back. 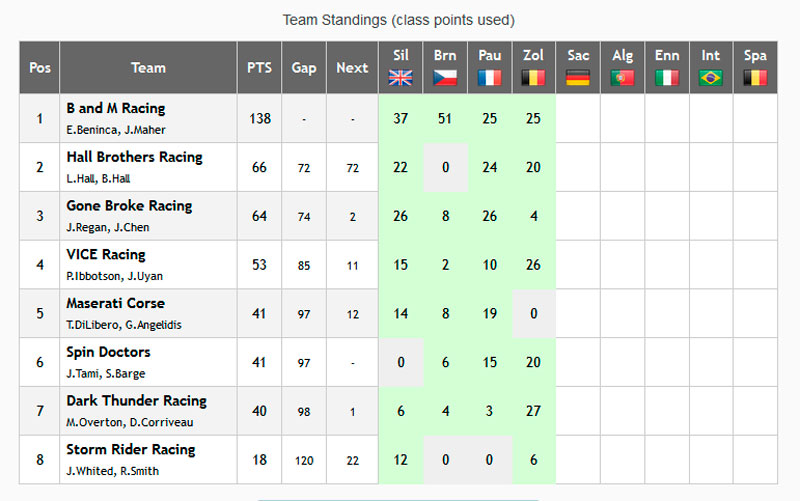