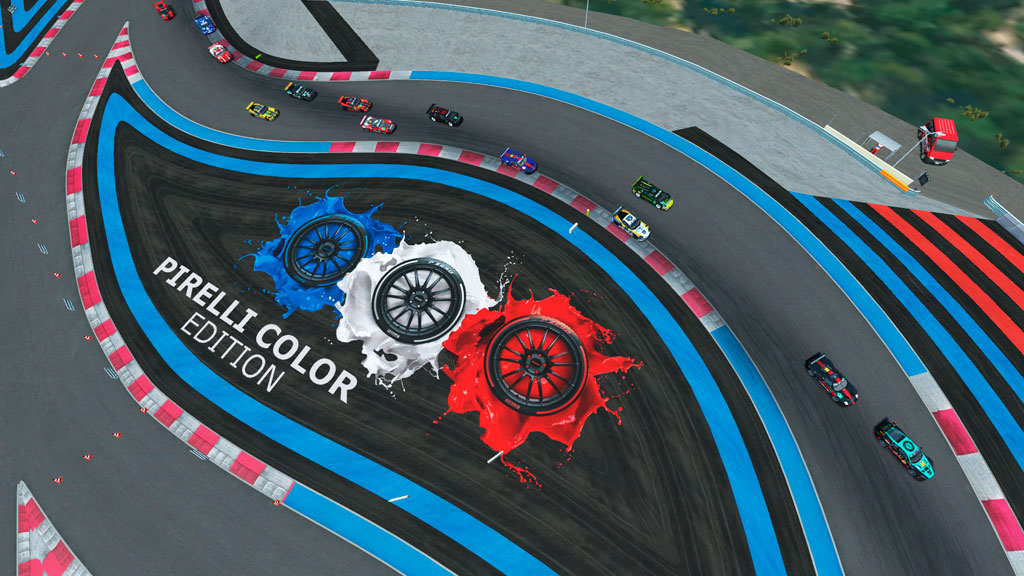 June 3, 2021 – Sunny southern France was the locale for Round 3, with the demanding Paul Ricard welcoming 30 drivers, including 8 teams of paired drivers for what turned out to be a thrilling race weekend. The flat and technically demanding track marked a dramatic change of pace from the Brno circuit with plenty of opportunities to pick different lines through the high and low-speed corners.

Anticipation was high that the competition would become that much closer with the announcement of a BoP adjustment aimed principally at the Ford GT. In addition, there was speculation that the Nissan GT-R would be making a reappearance in the series after a period of intense negotiations between the manufacturer and race organizers that resulted in some demanded BoP adjustments to the Nissan. 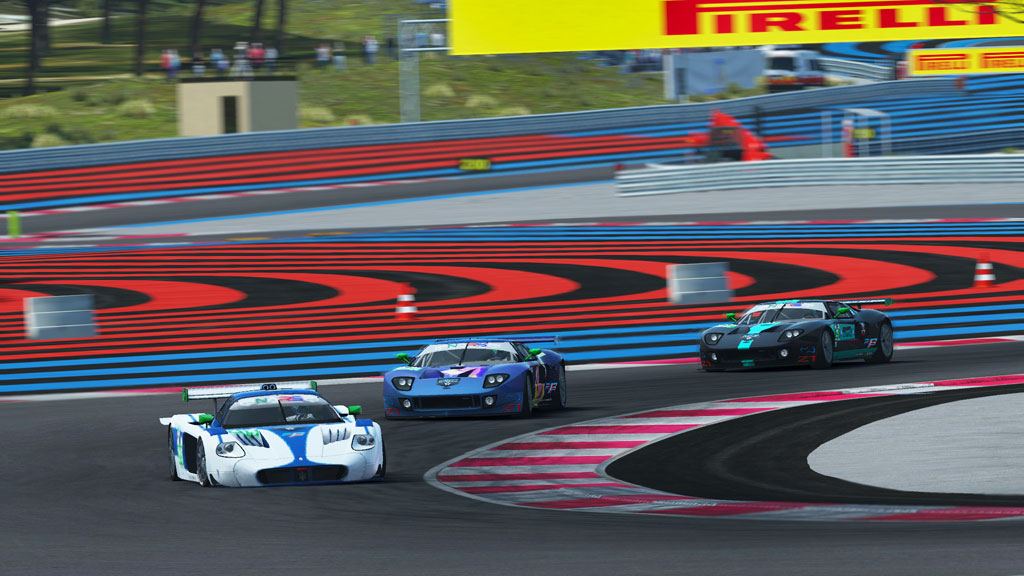 Maserati claimed a second pole of the season, as PRO driver Ahmed Abdallah piloted the MC12 around the track for a scorching 1:53.405. It was Daniel Kirby and then Michael Parker, both in Ford GTs that rounded out the top three in PRO, within a second of the polesitter. In AM, Danny Corriveau of Dark Thunder Racing claimed the top qualifying position with a 1:54.788, almost a second ahead of the Ford GT of B&M Racing’s John Maher with SRR’s Ross Smith placing his Lamborghini Murcielago R-SV into third spot another 1.5s behind. 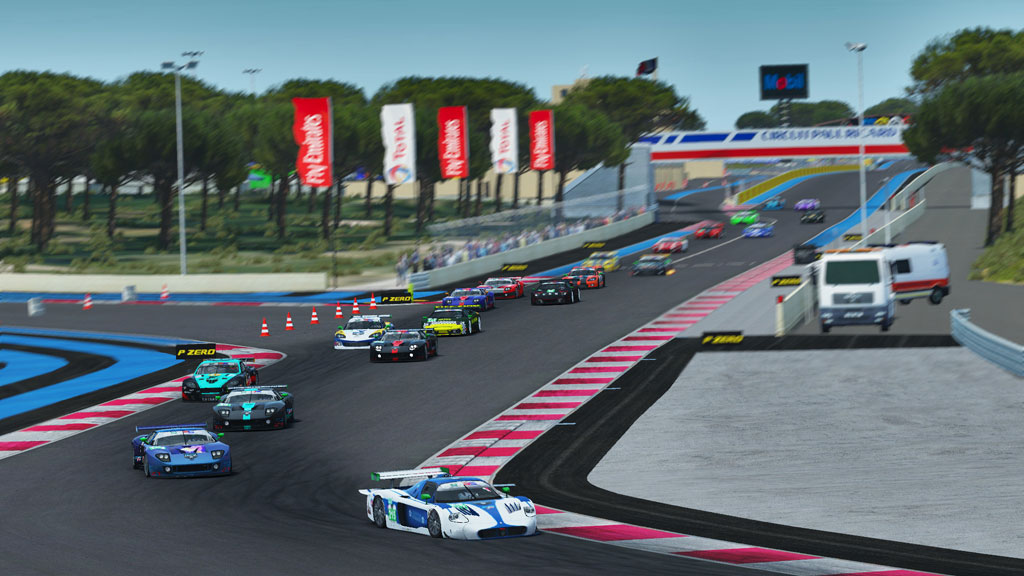 At lights out, the front half of the order had a relatively smooth first few laps however this was not the case further back as a series of incidents on L1 shook up the standings quickly, with Ajay Ren and Guilherme Bencke reeling down the order. Not long after, SRR teammates Jason Whited and Ross Smith lost places from incidents as did Danny Corriveau and Colin Moore. Tom Mountjoy, originally benefitting from the problems of others, also found himself going backward on the grid. Through the chaos, PROs Eduardo Beninca and Matthew Overton, made steady gains into the mid-pack until a slight miscalculation sent Beninca back several places before renewing his climb back up the order.

Up at the front, a series of difficulties forced the sudden retirement of Abdallah, placing Kirby in the lead and chased by Parker and Rich Hibbs. Disaster struck again with a serious incident forcing Hibbs out of the race as well as a separate issue for the steadily advancing Ford GT of Gilles Lalonde, sending him back down the order although a strong recovery saw him complete a top 10 finish.

The pit cycle saw the leading pair of Kirby and Parker replaced by PROs Brian Hall, JT Tami, and Jon Uyan, putting two Corvettes and a Lamborghini to the front of the race. Danny Corriveau had driven a great recovery to regain the AM lead over Maher while his Dark Thunder Racing teammate Overton had made steady progress into the top 10 to give the team some great hope for a strong finish. It was not to be however as successive pit crew errors left Overton stranded on track with no fuel and miscommunication on tires resulted in several spins for Corriveau and a serious loss of positions.

Back in front and pits completed, Kirby and Parker regained their top positions, with Tami passing Hall for third ahead of the ever-dangerous Jon Uyan of V.I.C.E Racing lurking in the near distance in his Lamborghini and it stayed in this order through to the chequered flag. With these PRO cars taking the top 5 positions, it was the B&M Racing Ford GT of John Maher that topped the AM podium in P6 overall, Jimmy Regan driving the Gone Broke Racing Ford GT in second and the Maserati Corse MC12 driven by Thomas DiLibero ahead of Lanny Hall’s Corvette. 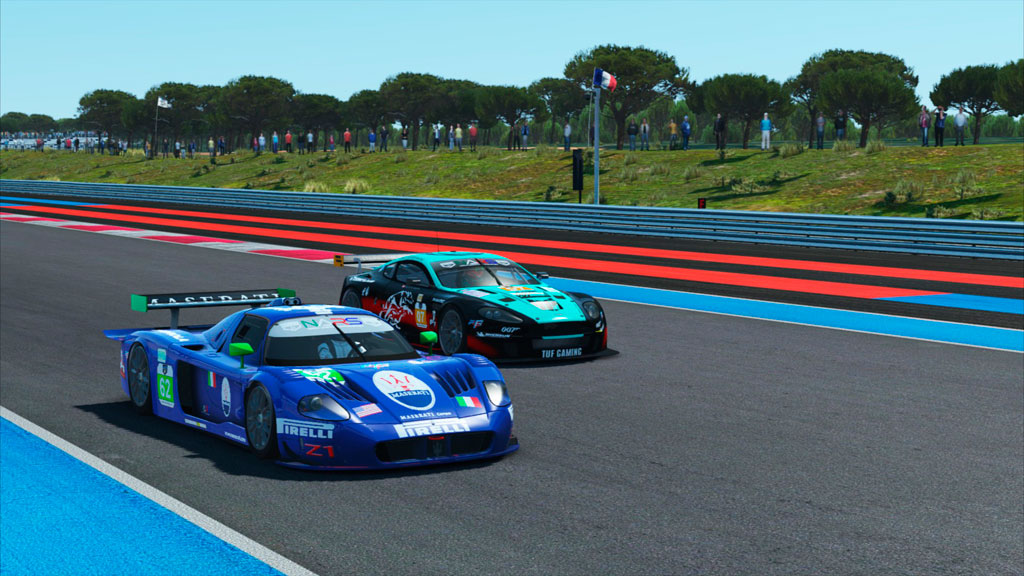 The celebrations of the winners were accompanied by collective sighs of relief as the stewards confirmed that all the teams had met the racing regulations fully and no actions were necessary. And while short of a double podium for the team, some of the loudest cheers heard yet came from the B&M Racing garage as they celebrated the astounding achievement of Eduardo Beninca in winning the ‘Hard Charger’ award of the race through his 22 positions gained from his starting grid placement.

Noticeably grim, however, was the mood at the Dark Thunder Racing, were not only the team principal but also the two crew chiefs were unceremoniously ejected from the paddock for the devastating and avoidable failures that resulted in their stunning reversal of fortune on the circuit.

The VGT1 Championship continues the tour of the Continent with the next stop in Belgium and the famous Zolder circuit on June 10th. 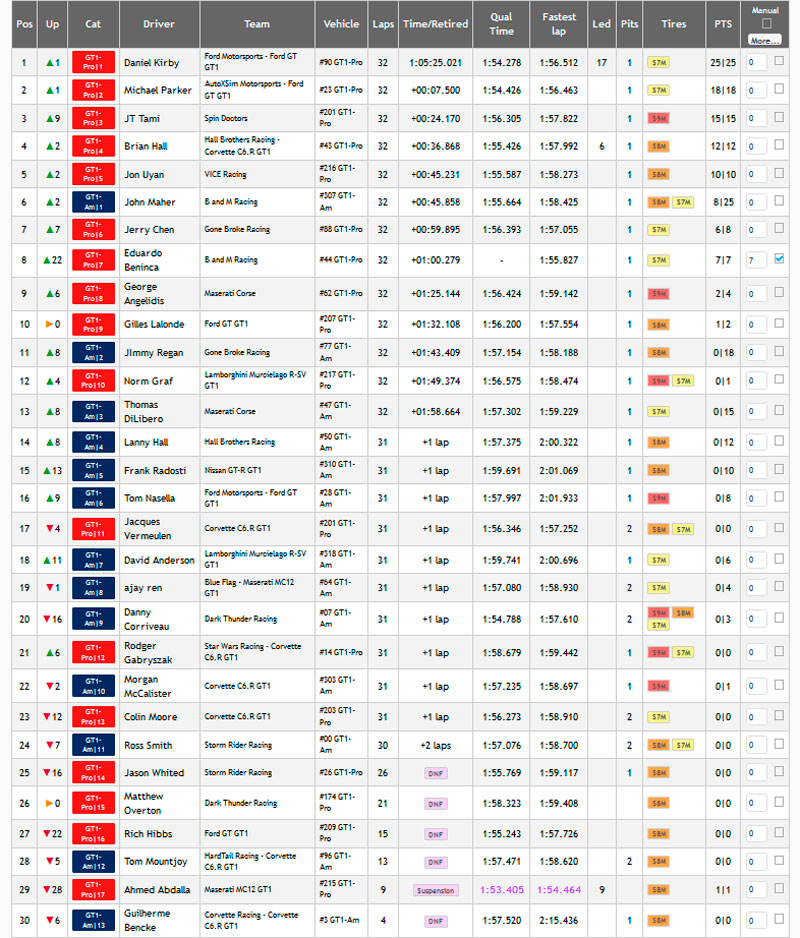 With three races complete and the ‘drop round’ taking effect, Kirby and Maher, leaders in PRO and AM are not having it all their way, with several competitors keeping them in sight and over half of the season yet to come. On the team side, B&M has established a strong gap to their nearest competitors however even one race with some poor luck could see a radical shift in the standings. 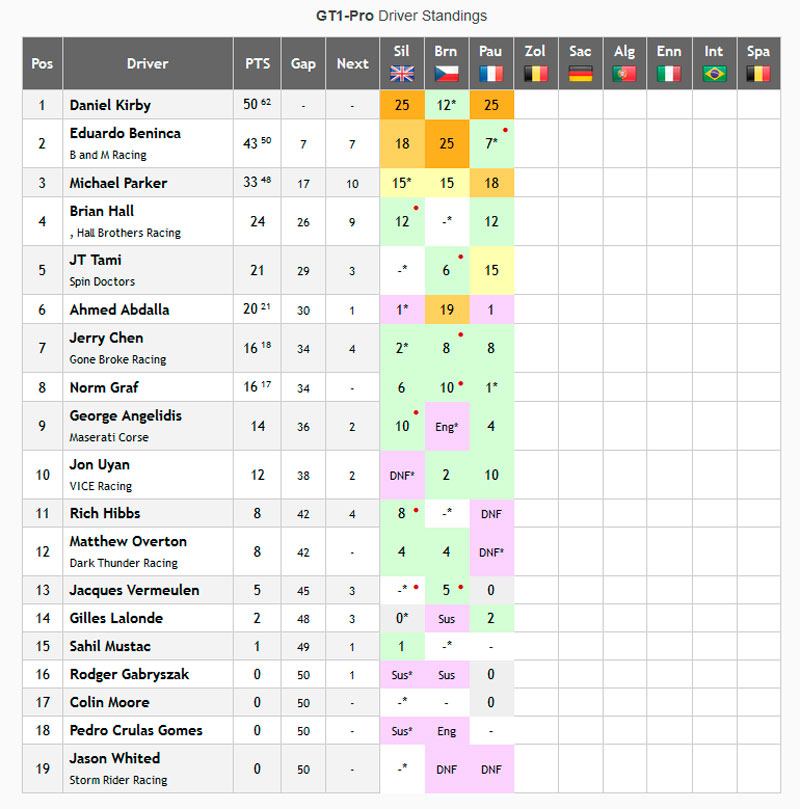 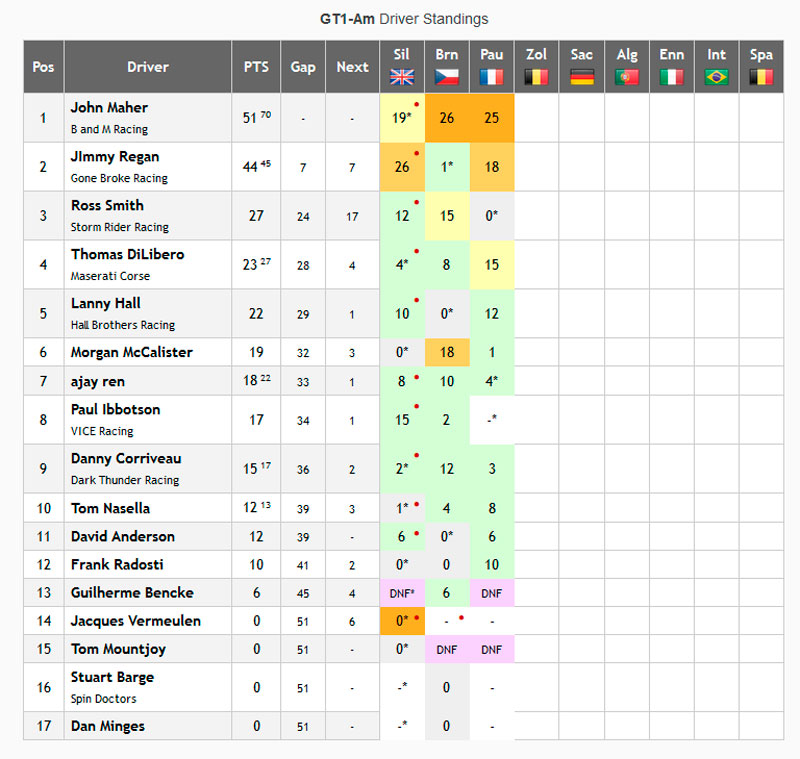 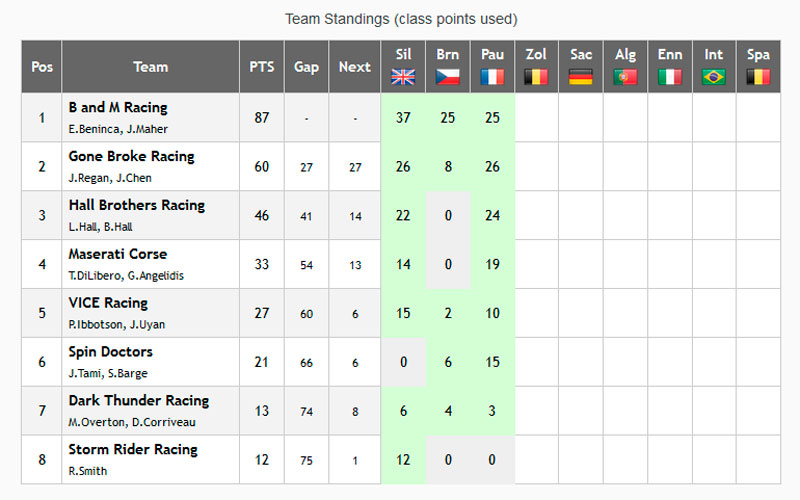