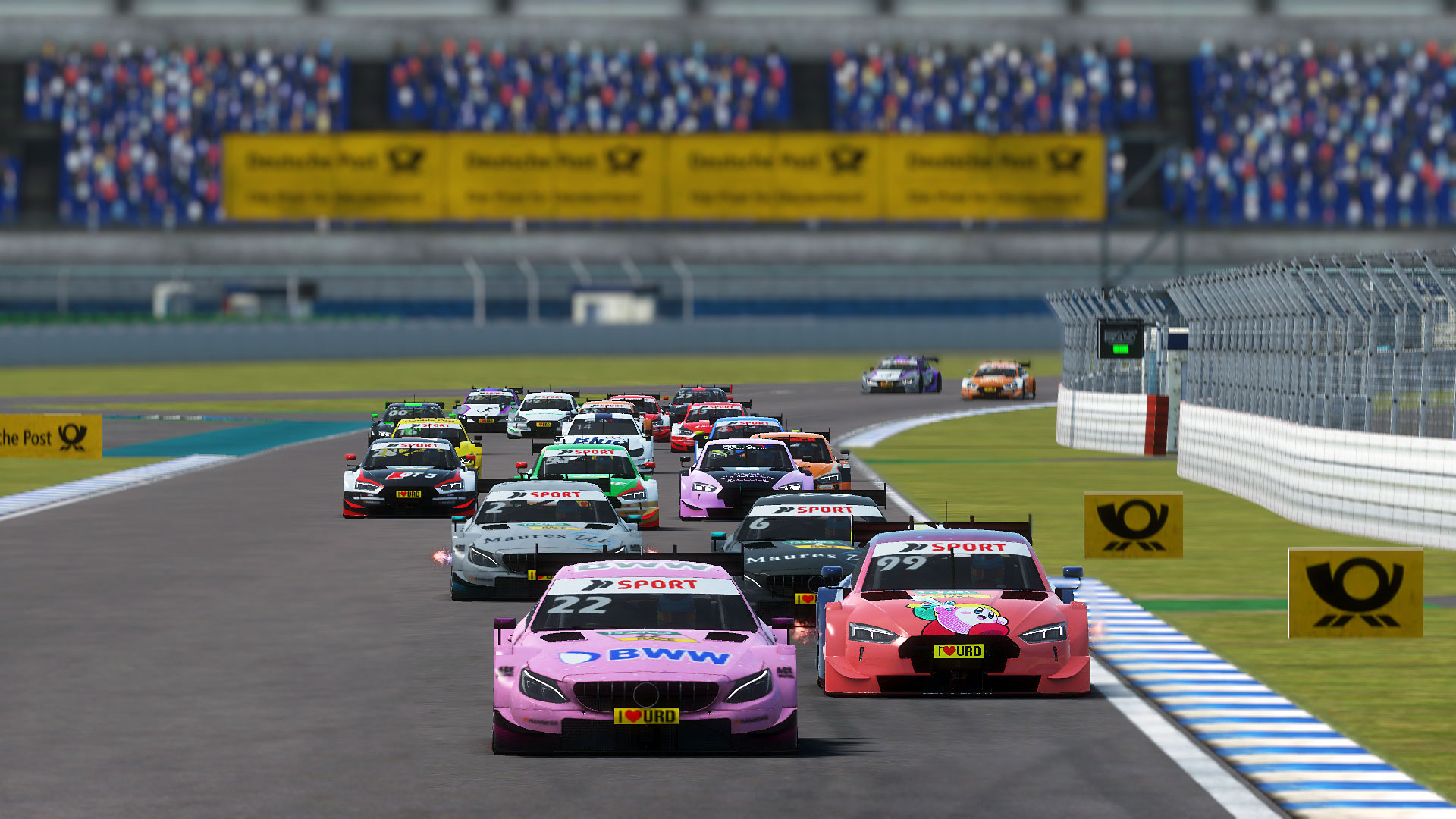 Another beautiful week and another weekend of off-and-on-again weather that is so typical of Europe in the spring. 21 drivers (11 PRO and 10 AM), including a late PRO series entry, Juan Salas Morales, assembled in the paddock for the race weekend, guaranteeing great action for the penultimate race of the season.

Spring delivered the required dose of rain during the final practice, but the generally warm weather and steady breezes meant that by the start of qualifying, the conditions were almost ideal, giving over to a number of PBs as the drivers jostled for their starting positions. Once again, PRO Ahmed Abdalla seized pole position with both hands, laying down a 1:31.849, over a half-second ahead of Daniel Kirby. In AM, Matthew Overton’s 1:33.499 placed him .02s ahead of Danny Corriveau , with John Maher only a half-second behind the leading two. 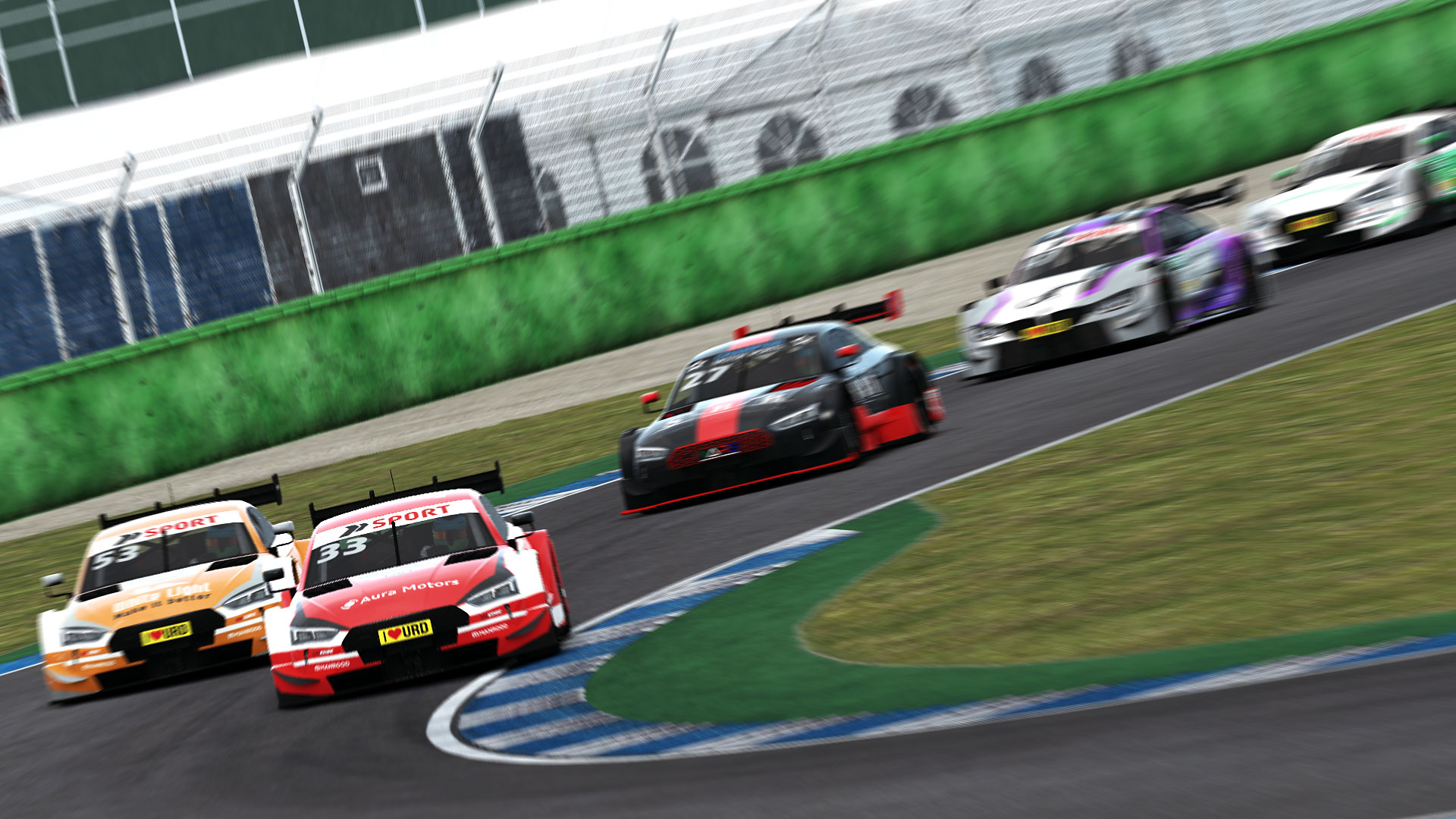 A sprinkling of rain during the warm-up did not in the slightest deter the drivers from attacking the moment the green flag dropped. The first laps saw positions being changes throughout the field as the PRO and AM drivers battled each other on differing strategies as the starting tire choices played a major role in when and where advantage could be gained. At about 1/3 the way through the race, the rain reappeared, leading to earlier than normal pit cycles for the drivers that had chosen to start on slicks.

With the cycle complete, it was quickly apparent that AM drivers John Maher and Rodger Gabryszak had judged pace and tires extremely well and found themselves racing in the top five, with Maher holding down P3 at the midpoint of the race!

Corriveau had also been in the mix until his pit crew was unable to get space cleared for him due to lengthy and ill-disciplined repairs being completed on Overton, who had suffered a major collision with Edgar Cruz on L8. Corriveau had to be waved through and suffered damage from a spin shortly thereafter, leading to very heated exchanges between the two paddock chiefs.

Another unlucky casualty of the race was PRO Norm Graf, who suffered a second-blown engine of the series.

Back on track, there was some thrilling racing in the final laps of the race, as series leader Abdallah made a late charge for the podium after he too had to be waved through the pits when his crew could not get in position due to another driver across his pit box, PRO Uyan battled with both Maher and Gabryszak for a top 5 finish, while AM drivers Tom Nasella and Paul Ibbotson chased each other over the final laps with Ibbotson claiming 4th in AM with a pass in the final lap. 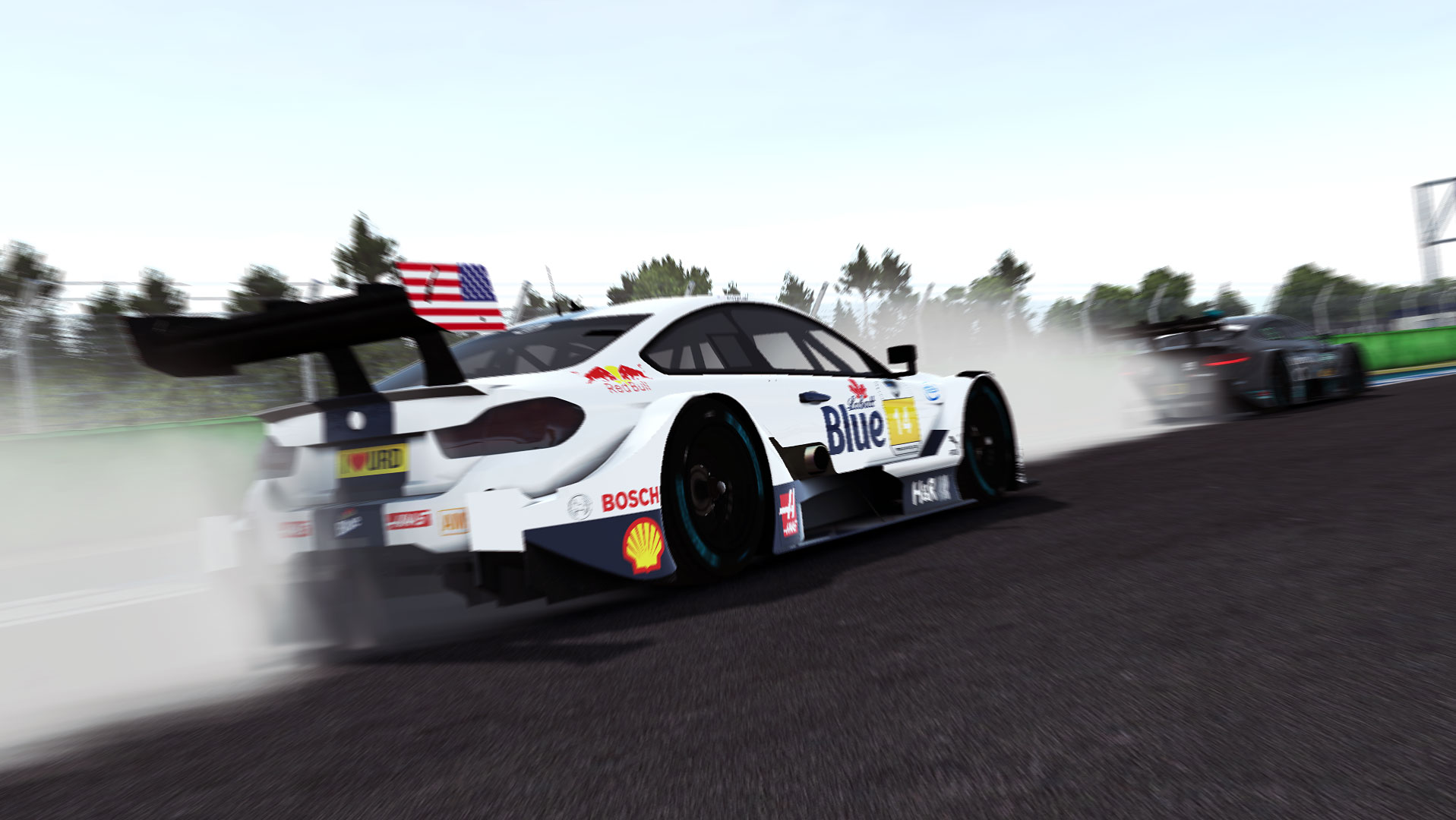 In AM, it was the maiden win of the series for John Maher (Aura), 12s ahead of Rodger Gabryszak (Bayro), and a full minute ahead of Jimmy Regan (Bayro), marking his second podium finish in a row and the strongest finish yet for the manufacturer.

The top mover of the race was PRO Jason Whited (Aura), finishing 7th overall and 5th in PRO from P18 start on the grid! 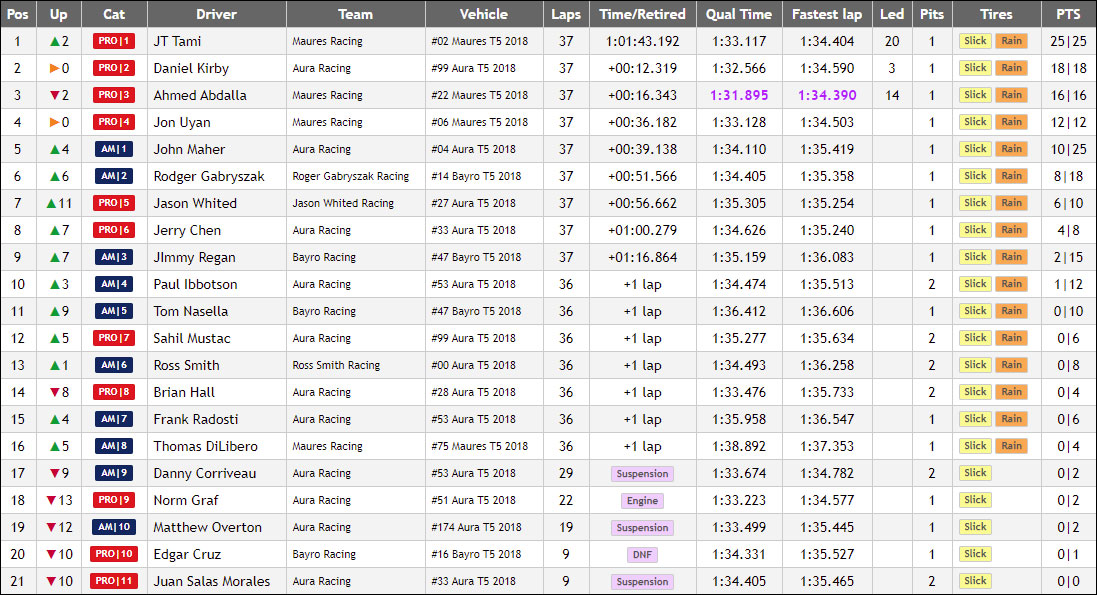 With 8 races now complete, the PRO top three are settled with Ahmed Abdallah the series champion, and JT Tami all but certainly taking second place over Dan Kirby. In AM, while Overton has locked up the series win, Rodger Gabryszak, John Maher, Ross Smith, and Paul Ibbotson are all in the hunt for the two remaining podium spaces. There are also a number of close battles further down the order in both series, making for some intense preparations as the teams ready themselves to race for honor and the chance of glory on the podium one final time. 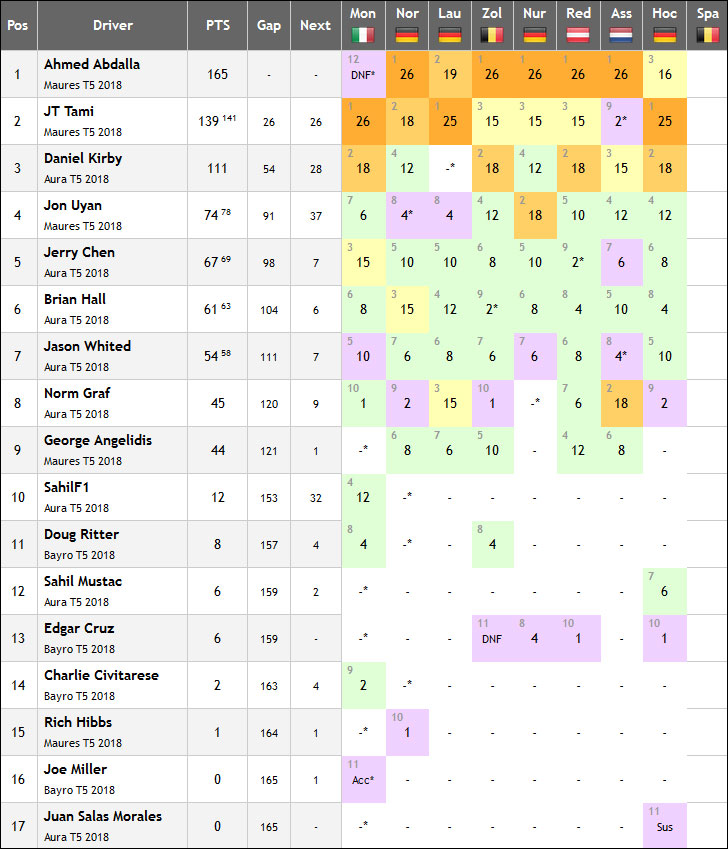 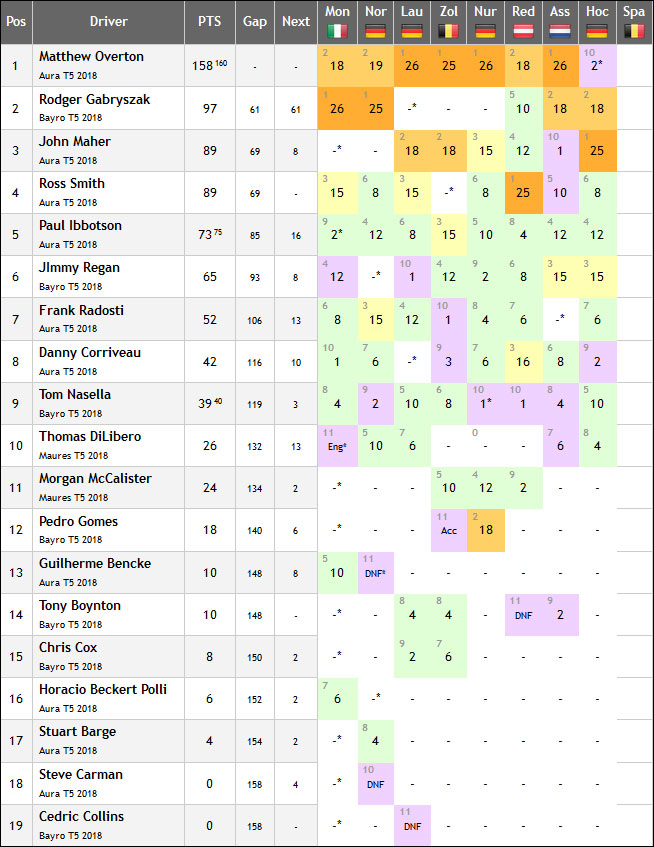 The next round is scheduled for April 8th and will be at the Spa-Francorchamps with qualifying at 9:00 PM EST.