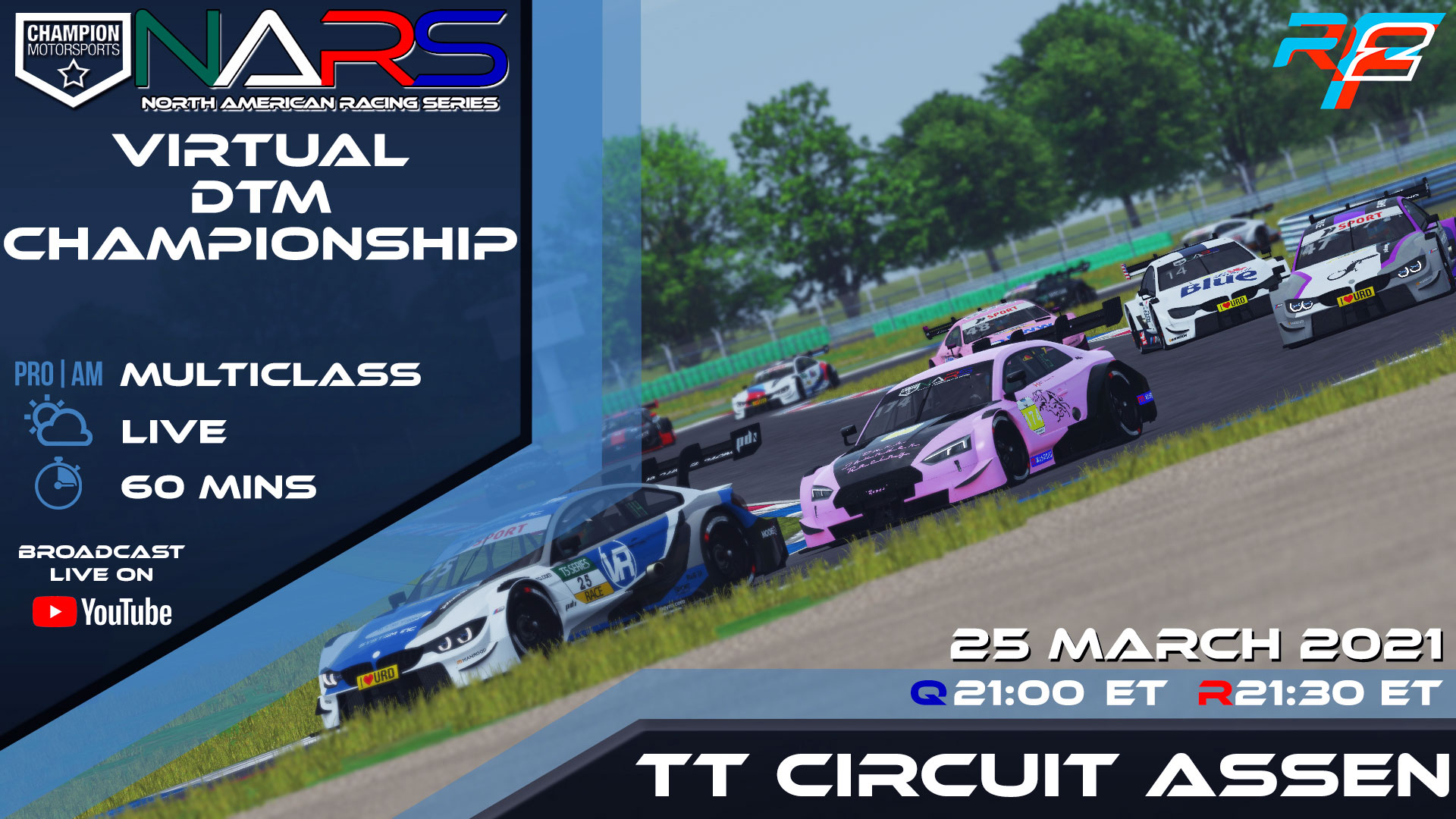 March 25, 2021 – It was a thankfully short trip for the drivers and teams as they left Austria for the Nederlands and the city of Assen to prepare for the next round of the CMS NARS VDTM Championship. With only 3 races left and the series wins for both PRO and AM virtually locked, there was still much to race for in the battles for the remaining podium positions.

And so it was 19 drivers (9 PRO and 10 AM) enjoying the Dutch hospitality and working to further refine the tuning of their cars in preparation for their race at a venue more renowned for the MotoGP than motorcar racing. While during the week, the practice conditions were bright and dry, by the weekend itself, spring had reasserted herself with a good lashing of rain during the final practice. This proved to be a major factor in the race, as events were to prove.

Qualifying while under dark skies, provided stable conditions for the drivers, though the marked difference in drying on the track between the racing line and the remainder of the track was a topic of considerable discussion and speculation over starting tire choices. Despite the challenging conditions, it was perennial pole-sitter, Maures PRO driver Ahmed M. Abdalla setting the pace at 1:38.092s with AM driver Matthew Overton putting his Aura into second place overall with a 1:39.640, just nipping ahead of JT Tami in another Maures. All three drivers were well off the expected pace with the rest of the field strung out behind. 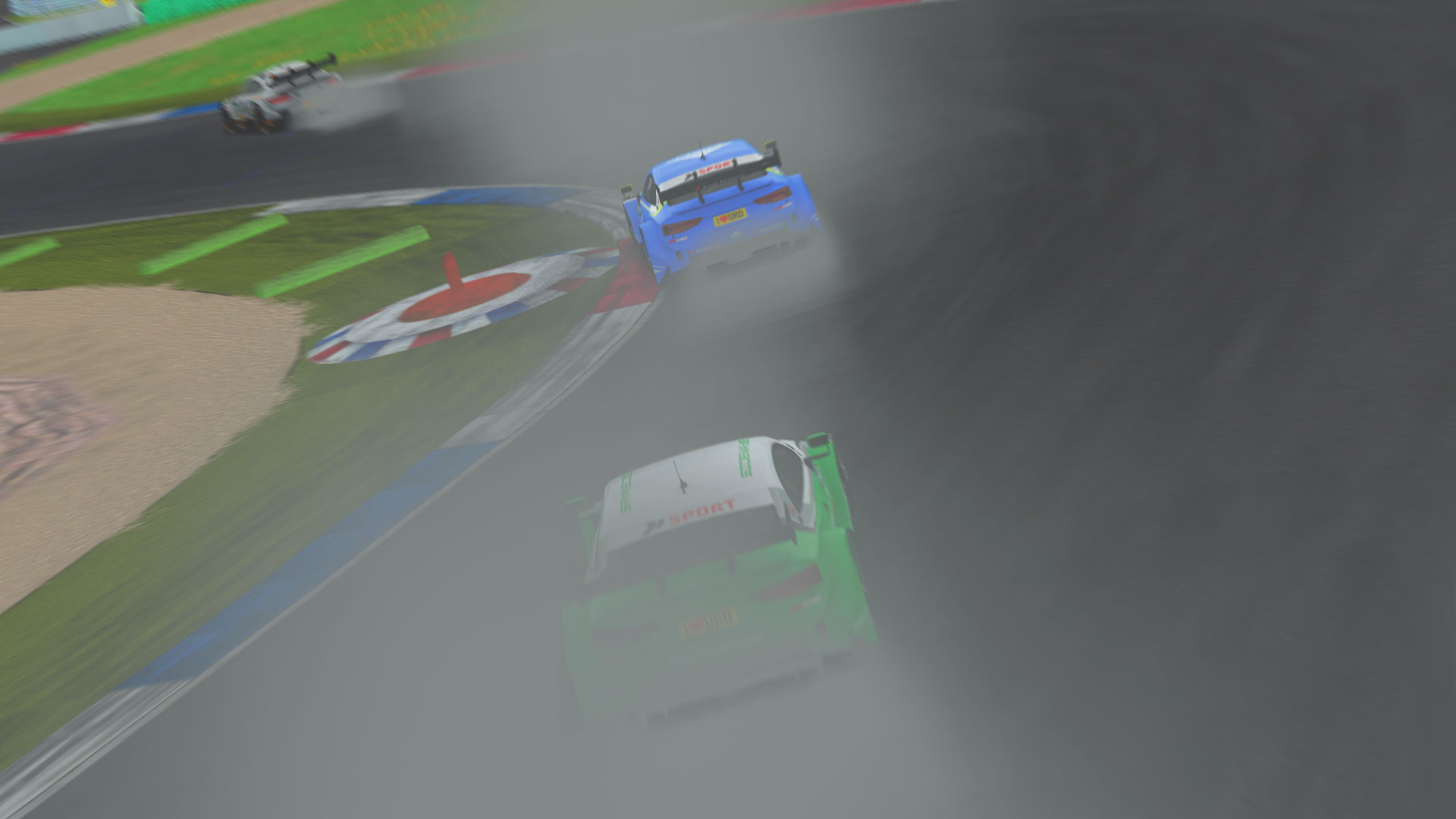 With only 2 drivers opting for slicks to start the race, it was clear that there was little appetite to risk any errors on track in the early stages. Even with this cautious approach, the dramatic difference in grip across the racing surface led to difficulties early on. JT Tami was an early casualty of the difficult conditions, retiring after only 5 laps due to accident damage, followed two laps later by John Maher. Jason Whited and Tony Boynton were also early retirements when their suspensions gave out after off-track excursions.

The front of the field also suffered their difficulties, with Abdallah spinning several times and giving up the lead twice to Overton, and retaking it, despite having built at one point a 20s gap over the AM series leader. Behind the front pair, the action was constant as drivers traded positions through the pit cycle and beyond.

It was at this point that the race unraveled for Overton, who was the sole driver to elect for wets, even after delaying the stop well beyond the normal. Conditions turned dramatically in the final 20 minutes, leaving the AM series leader exposed to the faster cars chasing. A second stop to bolt-on slicks stopped the bleeding, but all hope of an overall podium was gone by that time. Norm Graf and Dan Kirby were the initial beneficiaries of the mistake by Overton, with Jon Uyan, Brian Hall, and George Angelidis completing the ‘pro class’ lesson on pit strategy to the driver likely to join their ranks next series.

The drying track also provided the opportunity for the PRO drivers overall to gain some distance from the AM field, something that had eluded them in the early stages of the race as they all struggled to solve the riddle of the racing surface. Jimmy Regan gave the Bayro fans some early reason to cheer, having climbed to 5th spot before having difficulties and falling to the PRO onslaught while Rodger Gabryszak drove a consistent race from start to finish, firmly planted in the top 10, commenting afterward “That was probably the hardest race I have ever done with rain”.

At the chequered flag, it was only 11 drivers that crossed the finish line, attesting to the challenging conditions that claimed both PRO and AM drivers. Ahmed Abdallah recorded the overall and PRO win in his Maures, followed by Norm Graf and Dan Kirby in their Auras. Overton, despite his difficulties in the late stages of the race, was able to take the AM class win over the steady Gabryszak and Jimmy Regan, who in 8th and 9th places overall, provided some welcome success to the beleaguered Bayro fans.

Regan had some additional good news in the announcement that he was the “top mover’ of the race, gaining 7 places from his starting grid spot!

It is back to Germany one final time for the penultimate stop of the series at Hockenheim, with the teams wondering what sort of spring weather will greet them when they arrive! 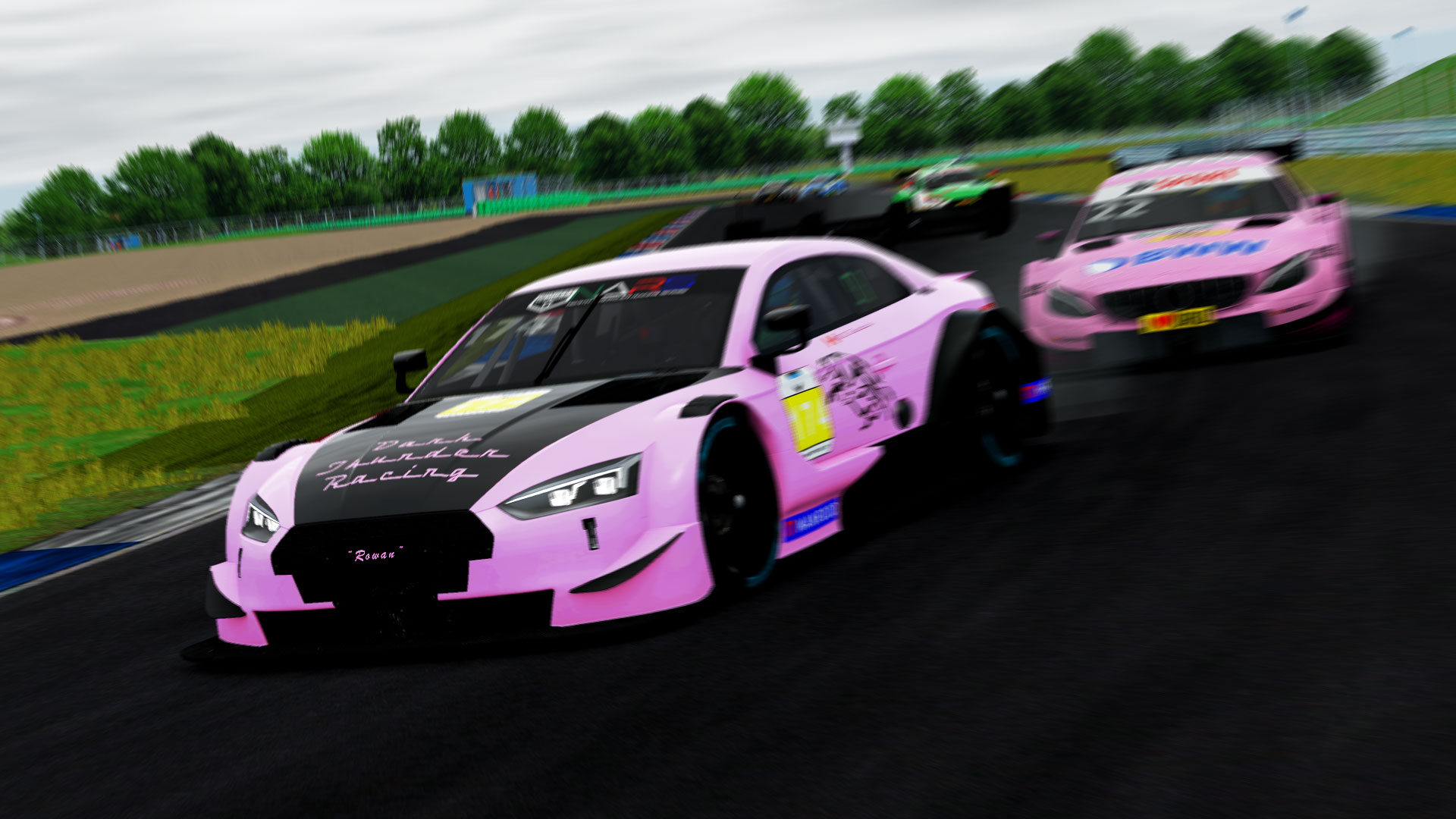 With 7 races now complete, the full standings for the VDTMC are as follows (drop round applied): 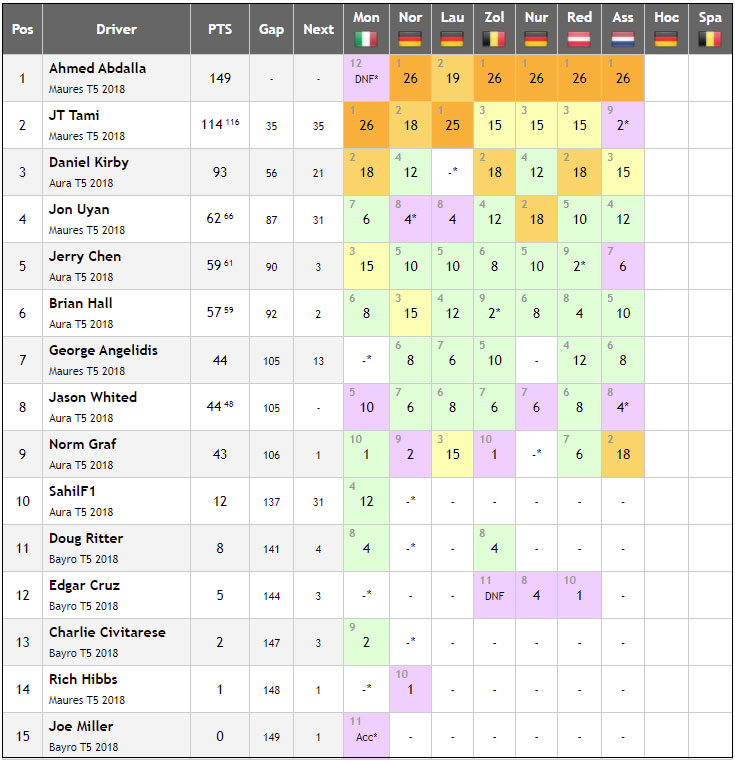 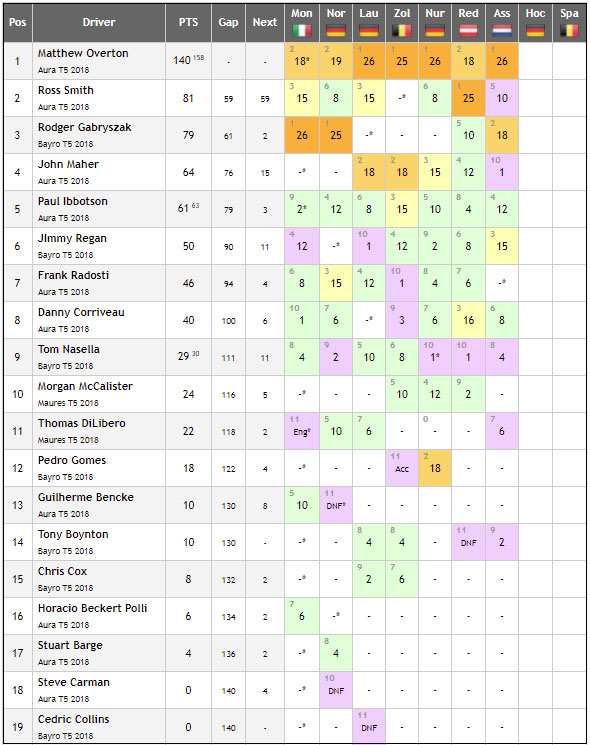 The next round is scheduled for April 1st and will be at the Hockenheimring with qualifying at 9 PM EST.