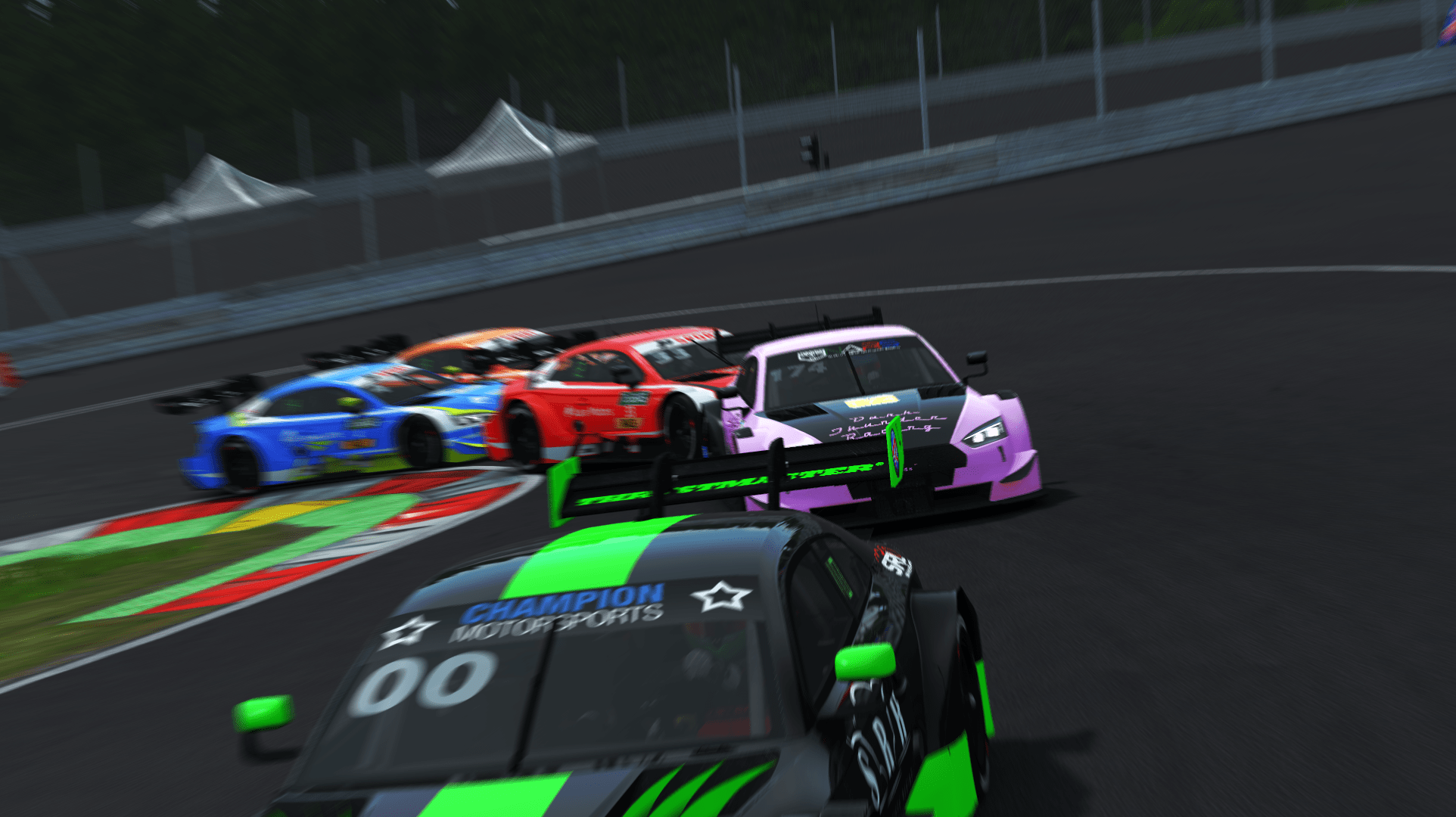 March 18, 2021 – Austria, in particular the lovely area of Styria, was the 6th of 9 stops for the drivers and crews of the NARS VDTMC. The Red Bull Ring was the venue and there was great anticipation for a high-speed contest along the long straights of this storied course.

21 drivers (10 PRO and 11 AM) completed the weekend of racing, much to the delight of the few fans permitted at the venue as well as the record crowd watching remotely. With periods of rain punctuating the practices, the odds were high that the drivers would be very lucky indeed to avoid a wet track for two weekends in a row.

A notable absence from the initial practices was PRO driver Ahmed Abdallah, raising speculation that there could be a real shakeup in the results. At the start of qualifying, however, his Maures wheeled out of the paddock to set an eye-watering time of 1:21.968, much to the disappointment of Dan Kirby, Jon Uyan, George Anglidis, and Norm Graf, who were all tightly packed behind him.

Aures driver Danny Corriveau grabbed the AM pole with a 1:22.965, again in a Maures, ahead of class leader Matthew Overton and Ross Smith.

The field took the rolling green as the drivers exited T2 Rebus under darkening skies. While the top of the order remained relatively unchanged through the opening laps, not so for the remainder of the field where tight racing meant small errors resulted in significant position changes.

PRO driver Edgar Cruz in his Bayro gained significantly in the first laps, moving smartly from 13th to 8th, however, his race ended abruptly due to a complete systems failure which left him fuming at the side of the track. With three DNF in a row, relations between the team and manufacturer must surely be at a very low ebb.

The expected rain made its presence felt about 10 minutes into the race with a steady procession of drivers heading into the pits over the course of several laps to change slicks for wets. This, plus a succession of different cars either spinning or otherwise having difficulties with the track as the drivers gambled on when to make that stop, made for some very tense racing up and down the order.

Two drivers, George Angelidis and Frank Radosti were looking to be the last to make the stop, however before they could, the rain stopped and they elected to carry on, thrilling the fans with their decision.

With the field now mostly on wet tires and the course slowly drying, anticipation started to build once again as the drivers and their teams furiously calculated the pros and cons of a switch back to slicks against the risk of a mistake that carried them offline, where the track remained quite wet.

Both the PRO leader Abdallah and his AM counterpart Smith elected to take their chances with the wets they bolted on very early, daring the drivers chasing them to gamble on their skills on the slicks in an attempt to seize victory before the win. 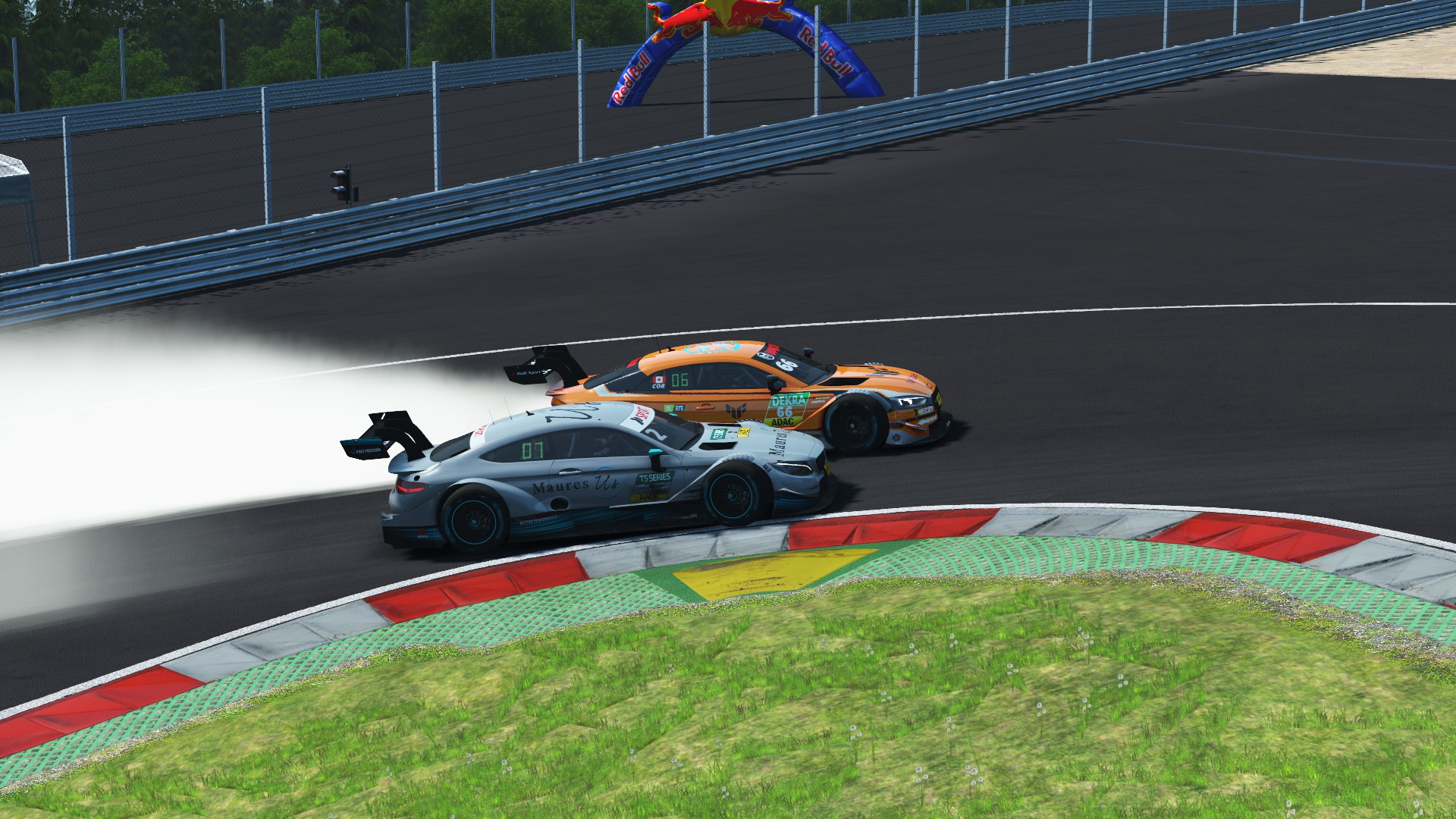 For both, the gamble paid off, but in each case, it was a near-run thing. Abdallah was able to take the chequered flag for the PRO and overall race win, but with only 2 seconds to spare over second place Kirby, who had been relentlessly closing what had been a 48s gap at mid-race. JT Tami claimed 3rd, having overhauled Uyan, also nursing his wet tires, with 5 laps to go.

AM winner Smith saw his lead being reduced dramatically in the closing laps of the race by both Overton and Corriveau, who both sabotaged their own efforts by pushing just a bit too much and suffering spins as a result, as they worked to get by Abdallah, who was doing nothing to defend against the two lapped cars.

In the end, it was a 3s gap too much for Overton, who was himself holding off Corriveau by only a 1/2s by race end. Smith was ecstatic with his maiden win in the series, unaware that he had been leading, even late in the race.

It was PRO Driver Brian Hall that claimed the “top mover’ of the race honors by moving up 8 places from his starting grid spot, though that was of little comfort with his last grid start due to a penalty from a previous race.

Despite some of the difficulties experienced by several of the racers, all the teams could point to positive elements in the race and it was a decidedly upbeat caravan that left the circuit late in the day. 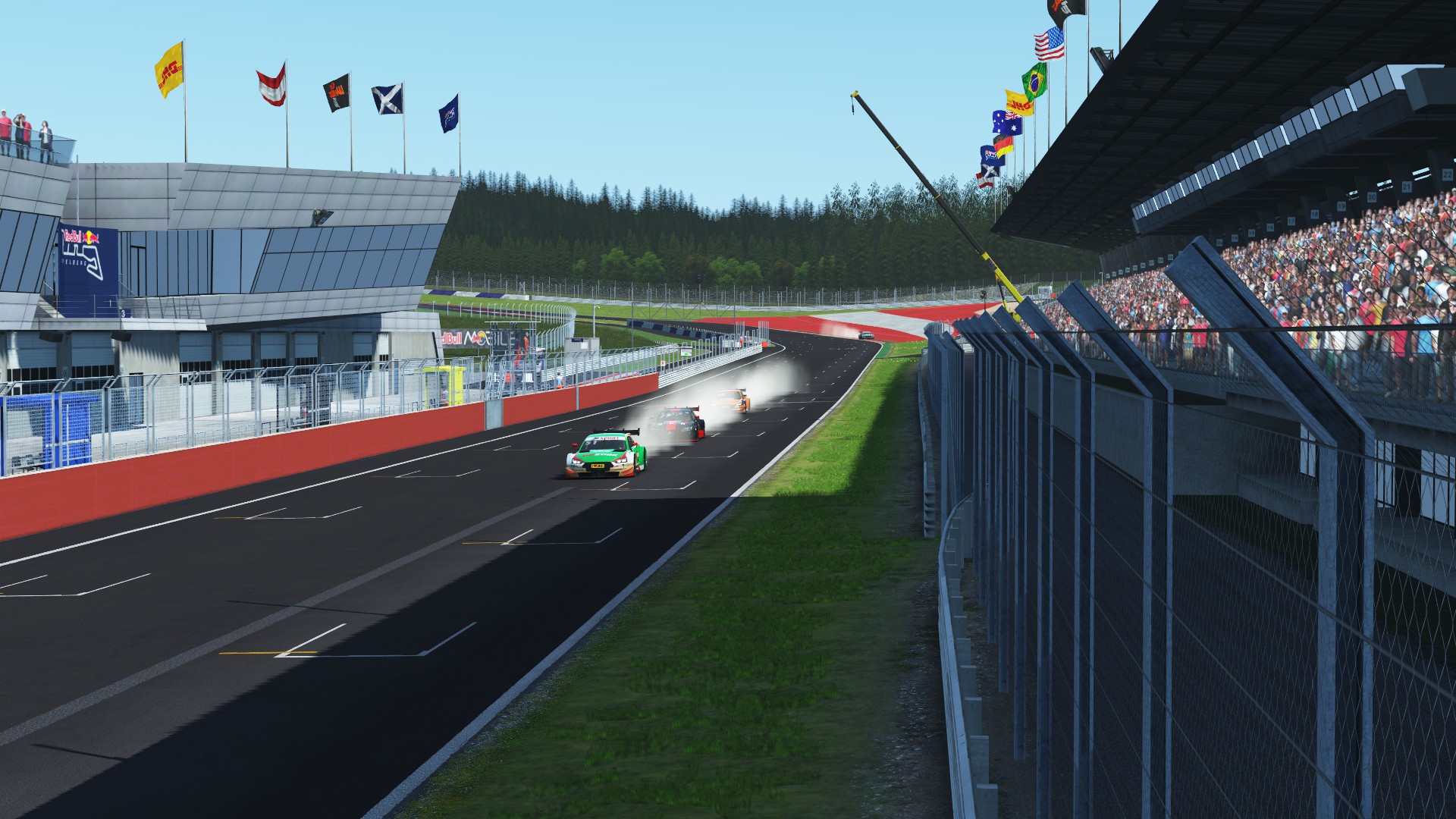 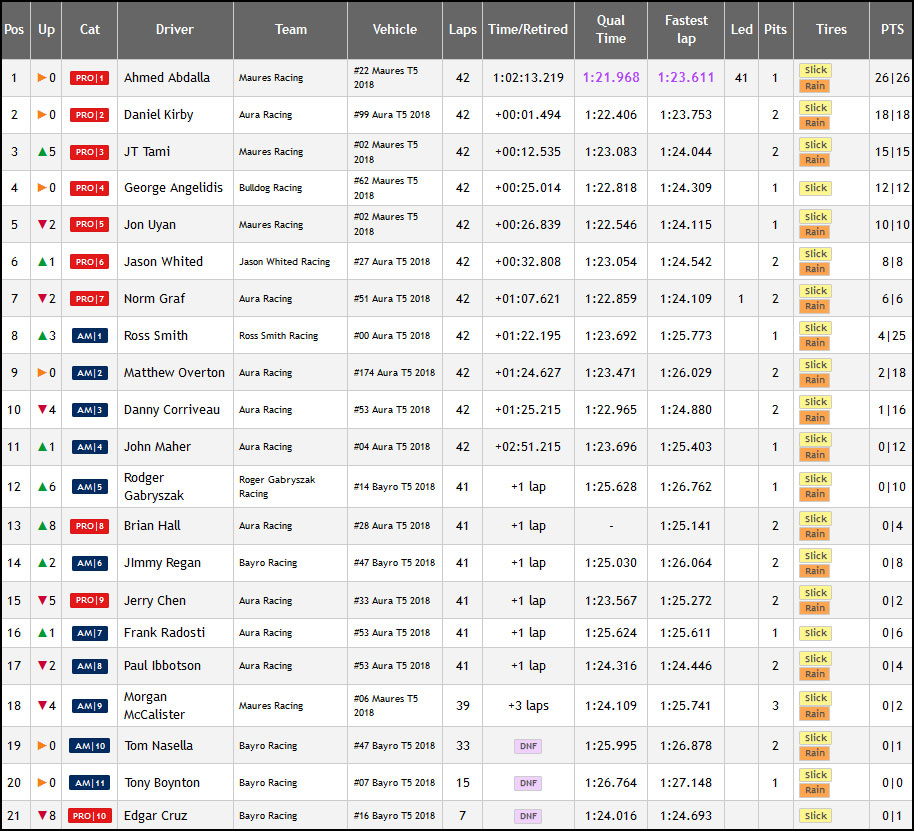 With 6 races now complete, the full standings for the VDTMC are as follows (drop round applied): 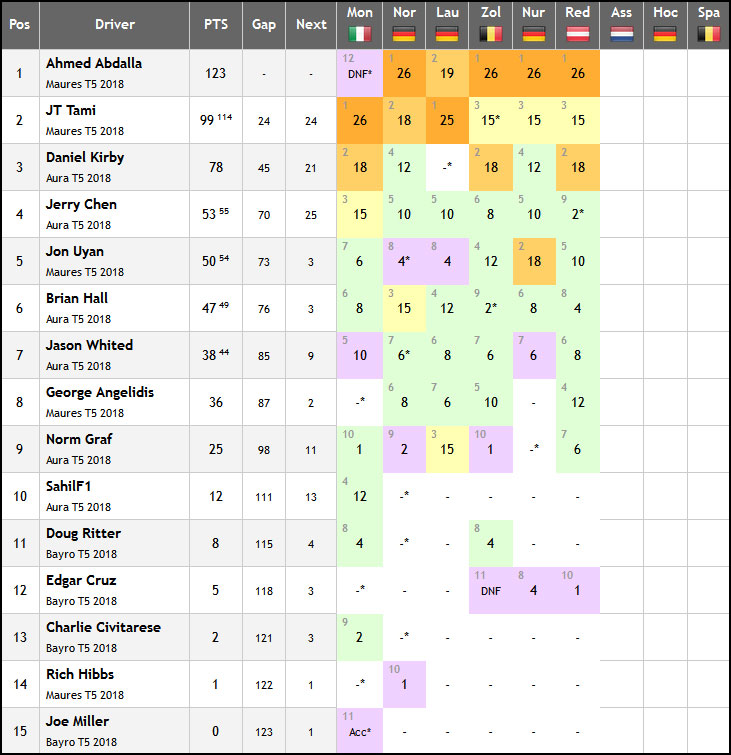 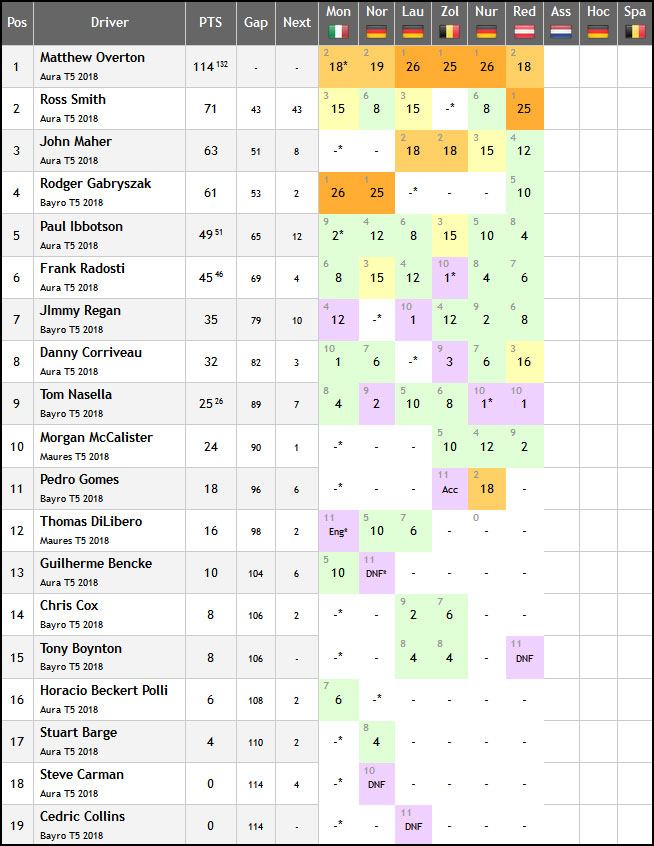 With no time to waste, the teams were busy packing up their trailers for the trip to Assen for the next round on March 25th.