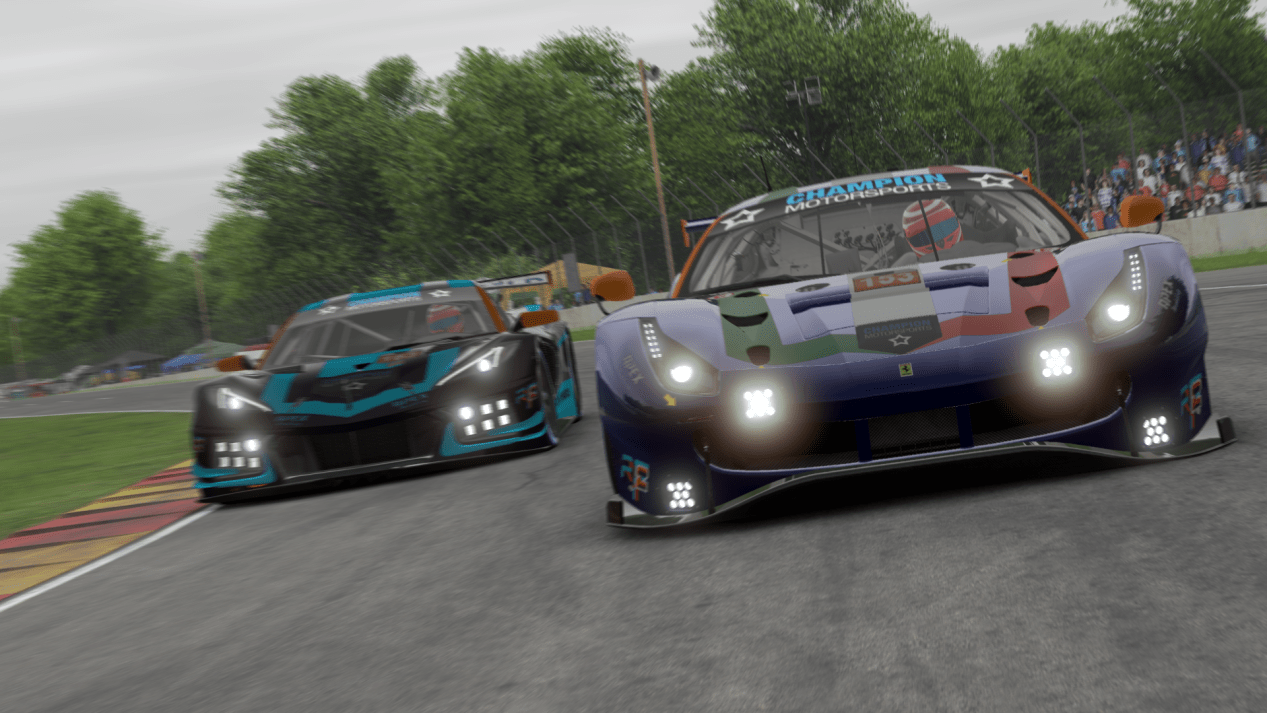 September 2, 2021 – 21 teams (10 LMH and 11 GTE) jetted back across the Atlantic to land in the beautiful state of Wisconsin and the always entertaining Road American circuit at Elkhart Lake. With only four events left in the season, every opportunity to score points, or the inability to take advantage of missteps, started to loom over the heads of each of the competitors. 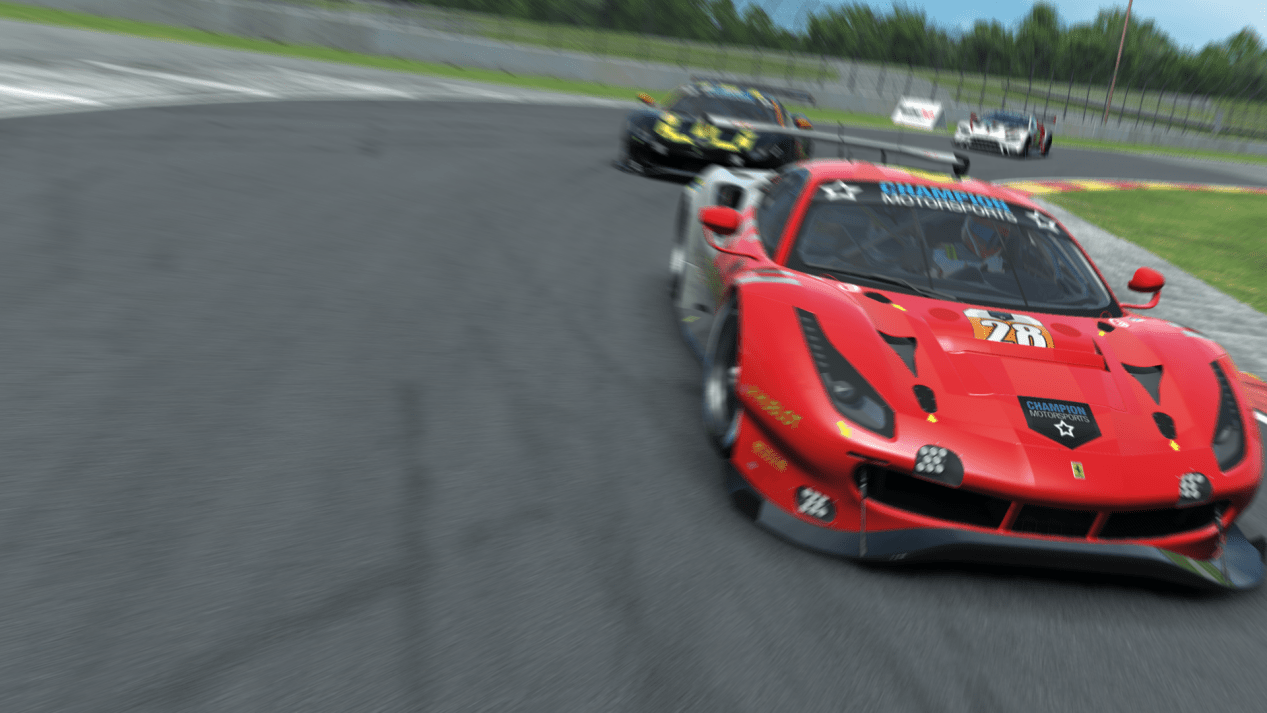 Nissan fans were pleased to see Jason Whited take his G-TR to the head of the LMH PRO field for a second time in a row, posting a 1:47.778 and Ferrari Tifosi was equally enthusiastic when Matthew Overton took his FXX-K to the top of the AM field with a 1:49.372. PROs Norm Graf and JT Tami took second and third with their Ferrari and McLaren respectively, while the Nissan of Ross Smith then the McLaren of John Maher took second and third in AM.

Jon Uyan and his Ferrari 488 took top honors in the GTE field, with the Porsche 911 RSRs of Jerry Chen and Sahil Mustac chasing him in PRO. On the AM side, it was Stuart Barge with a 2:03.538 in another Ferrari that paced the GTE qualifying field, with Morgan McCalister qualifying ahead of the Porsche of Gilles Lalonde. 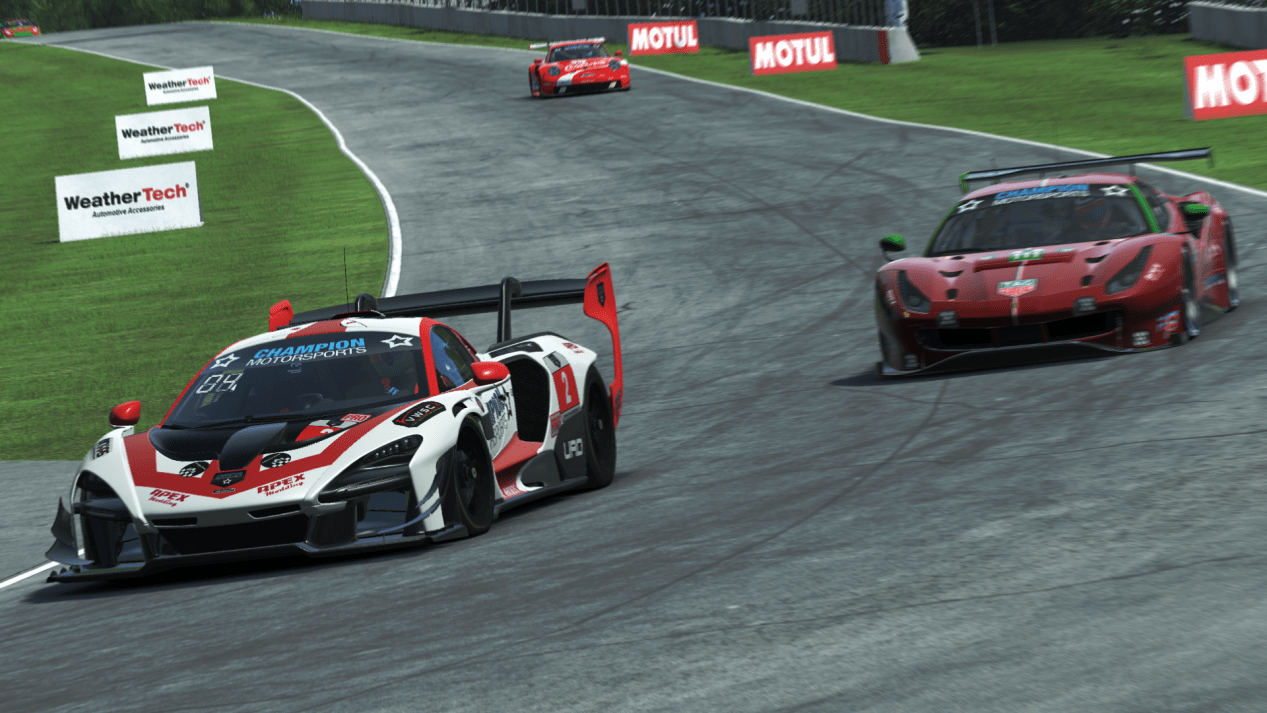 With a clean start out of T3, Whited led the LMH field down the back straight with everyone negotiating the tricky T5 lefthander with little incident. The drivers quickly settled into their rhythm with almost the full LMH field remaining with 15s total through the first 10 laps. Graf was able to grab the lead from Whited on L8. By L13, three distinct groups had emerged with Graf and Whited locked together, then Brian Hall leading Tami and Overton with Smith leading Lanny Hall, PRO newcomer Brian Hasett and John Maher, the groups separated by about 10s.

Brian Hall, clearly on a 2-stop strategy, started the pit cycle at L14 which then saw a steady procession of LMHs moving through the pits until the end of L17.  The early pit almost turned into the race lead, with Tami coming out of the pit just ahead of the charging Hall, early race leader Whited haven fallen off the pace and to sit 54s behind the leader. In AM, the calculated risk in not taking tires put Lanny Hall into the class lead, 5s ahead of Overton. Ross Smith, always a threat, held the lead briefly mid-race, before a penalty, and then a serious off at T2 with significant damage ended his race prematurely.

Having raced to some very strong positions, by the final third of the race, it all began to unravel for the Hall brothers. First, Overton was able to reclaim the AM lead on L23 when Lanny Hall slid wide at T5 after a late pass on a GTE at T5, and then Brian Hall was obliged by his 2-stop strategy to give up on his hunt for the race lead, pitting at L26 and then having to suffer a penalty for track cuts, pushing him well off the pace.

As the race wound down to the checkered flag, additional drama unfolded as first Graf and then Lanny Hall ran out of fuel and then Whited, who had driven some superb recovery laps to return to third overall, was awarded a drive-through for track cuts on the final corner of the final lap. In the crowd, confusion reigned supreme, as while the outright win of Tami was not in question, the finishing order of the next few positions took the stewards some time to sort out.  The official announcement put Overton as overall P2 and AM class winner, with Whited P3 and second in PRO, with Maher P4/P2 in AM. The Hall brothers claimed P3 in their respective classes, with B Hall just edging out Hasett at the line.

If there was any doubt about the determination of Jon Uyan to take advantage of every race, his performance at Road America put paid to them. While pressured hard by Jerry Chen deep into the race, he kept his head, and the lead, from start to finish, ending well over 20s ahead of his closest rival. Behind him, the fight was intense, with Chen leading a closed-up pack that comprised Barge, McCalister, Lalonde, and the very fast Sahil Mustac. Further behind, Erik Jacobs led David Anderson, Tom Nasella, and Tony Boynton were in another good battle through the opening laps.

Lalonde found himself falling out of contention early when a lock-up at T5 sent him into the wall heavily and then the first round of pit stops saw the remainder of the field starting to spread out. By the time the pit stops had been completed, after Uyan and Chen, it was Maher who had made up several positions, as had Mustac and Anderson. Both Chen and McCalister found their races undone, however, as they were obliged to pit a second time, clearing the way for Mustac and Barge to move ahead. Despite the best efforts of the hard chasing Chen, McCalister, and Nasella they were not able to overcome the gap, despite the increasingly worn tires of Barge.

At the checkered flag, it was a highly competitive race for the spectators with the final results as Uyan, Mustac, and Chen on the podium for PRO and Barge, McCalister and Nasella taking the top three places in AM. 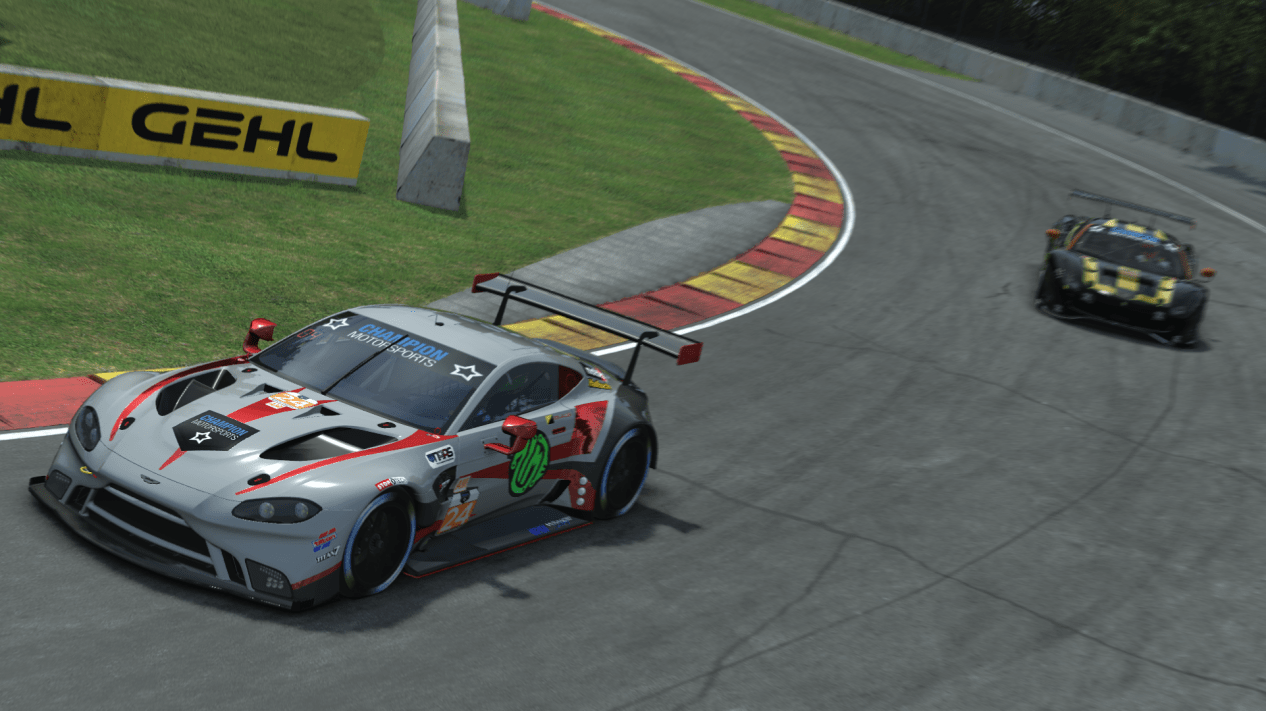 In a highly entertaining race, it was the magic performed by GTE PRO driver Sahil Mustac to run a highly competitive pace on only one pit for his Porsche 911 RSR that captivated the attention of the knowledgeable and appreciative crowd.

In the paddock, both the Ferrari and McLaren factory representatives were practically glowing with delight, with Ferrari the more so for having three class wins to celebrate of the four contested. It was a stark contrast to the Nissan contingent, who were clearly put out that their recent successes seemed to have already run out of steam.

In the overall results, the overall leaders remain the same but there was some slight jostling of positions to note. In LMH, PRO Jason Whited moves into third overall although it is JT Tami moving like a freight train as he approaches the podium spots, and AM John Maher also moved into third. In the GTE tables, PRO Jerry Chen has profited by the absence of James Walker to almost completely eliminate the gap, making a fight of it for third while AM Stu Barge has moved into second with Morgan McCalister jumping into fourth over Paul Ibbotson, absent for his second race in a row.

On a final note, this week, the “Top Mover” honors were shared by John Maher and Sahil Mustac with them both moving up 4 spots from their grid start. 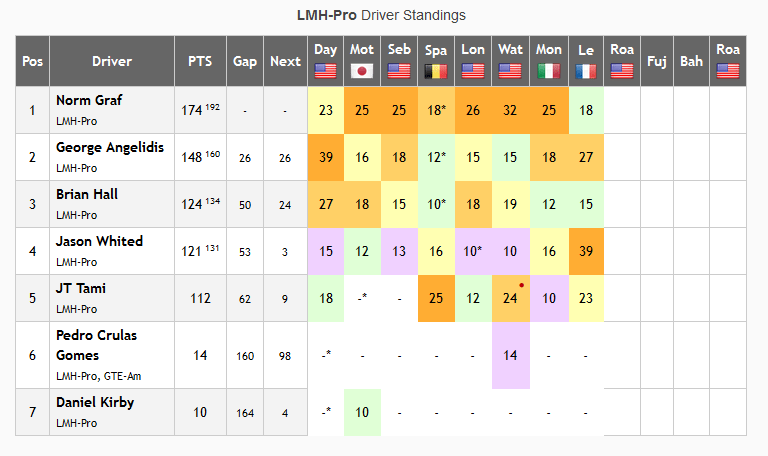 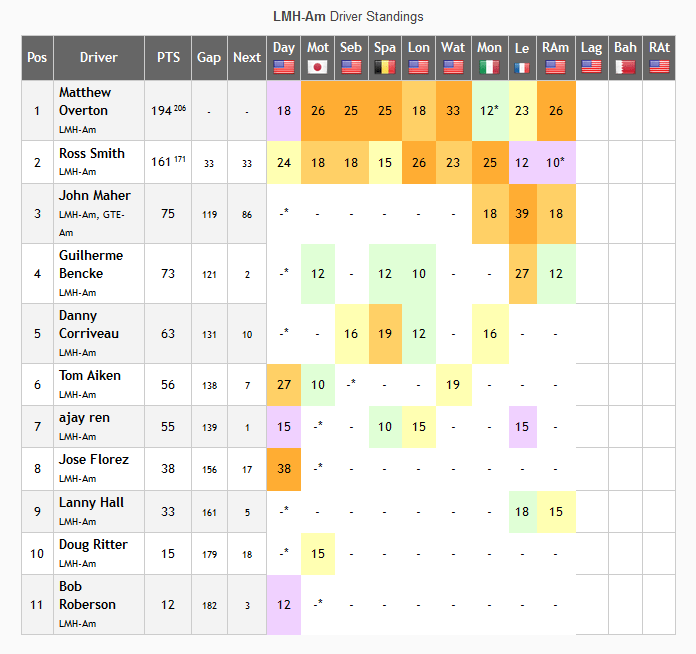 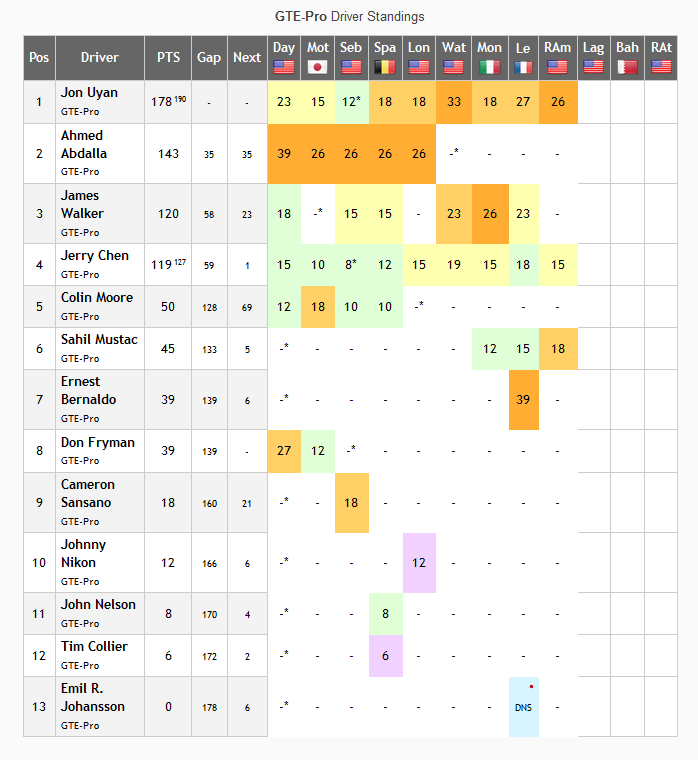 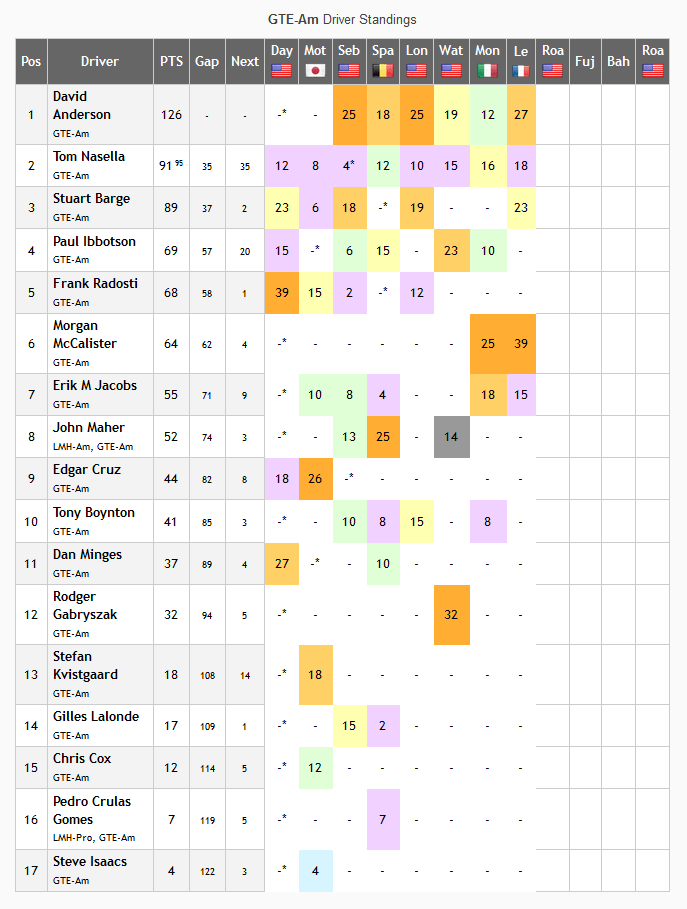 The next race in the VMSC will be a leap to the West Coast and the 60 Minutes of Laguna Seca on 16 September.