NARS Modern Sportscar Championship – Round 6 at The Glen 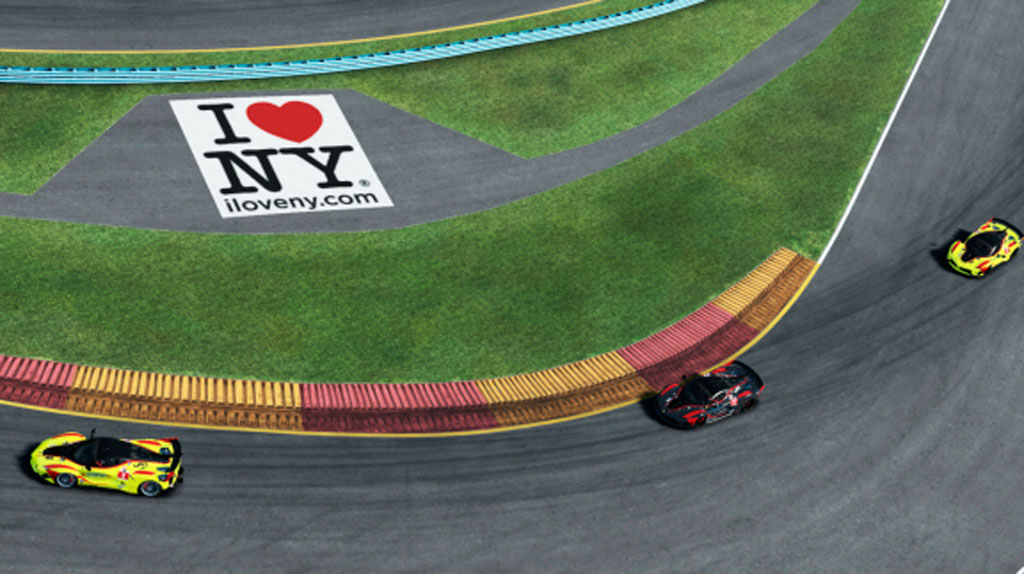 June 17, 2021 – Watkins Glen and the beautiful countryside and wine-tasting heaven of the Finger Lakes region of upper New York State were the venues for the 6th round of the VMSC, continuing the US stay for the series. Hot and clear weather gave the 19 drivers and teams plenty of excellent conditions for the practice, and it stayed that way through the practice rounds and for the race itself. With several championship contenders in both GTE PRO and AM choosing to sit out this round, there was a heightened sense of anticipation both in the paddock as well as in the stands that this race could be a significant turning point in the overall standings.

It was a newcomer to the series, Pedro Gomes in his Ferrari FXX-K that set the track ablaze with a 1:31.040, grabbing the overall pole and setting down a strong challenge for the series leader, Norm Graf, who qualified 3rd behind Brian Hall, both of them almost a full second adrift of Gomes. The LMH AM pole was claimed by another Ferrari driven by Matthew Overton edging out the Nissan G-TR of Ross Smith as they renewed their season-long rivalry. 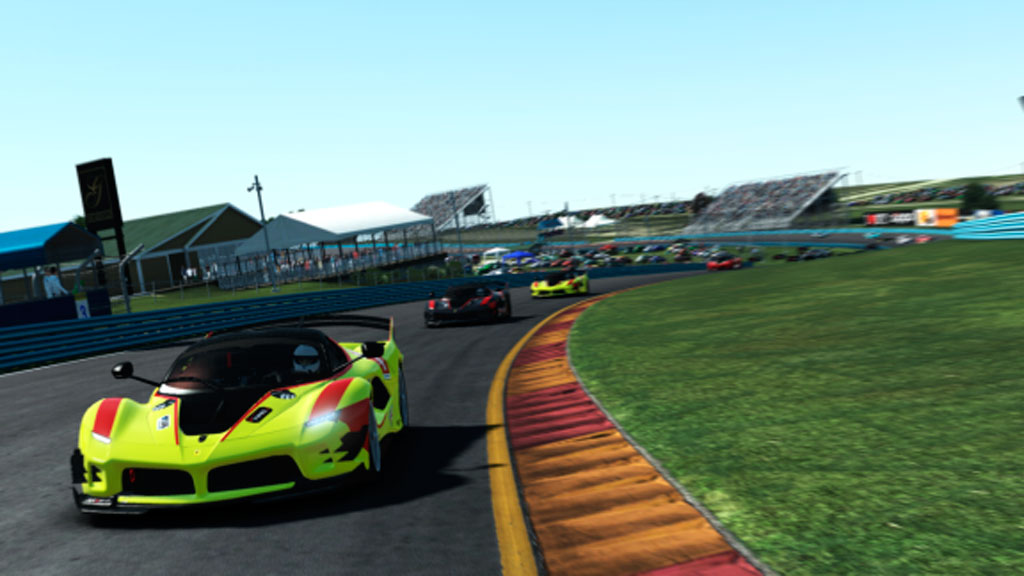 At lights out, it was a clean and fast start, with Gomes showing that his qualifying pace was no flash in the pan. He steadily drew away from the field, establishing a 3-second gap by L4. Behind him, however, the PROs led by Hall, Graf, Angelidis, Whited stayed bunched in a close pack with Overton and Ross separated by a pair of seconds. All changed at L4 when Gomes served a drive-through penalty for a false start and fell back considerably as the chasing group LMHs passed him by quickly.

It was not long, however, before he regained second place and was closing on Graf, followed closely by Tami. For the fans, this meant lap after lap of hard-charging LMHs weaving their way through the GTE field, often separated by only a second or two and unwilling to give any advantage to each other as they did so.

The AM rivalry was equally intense, with Overton leading Ross by only the thinnest of margins into and through the first pit cycle, where the two drivers exited the pit almost on top of each other.

The second stints proved to be difficult for the class pole sitters as first Overton lost his lead from an “off” in T10 due to cold tires, then Gomes retired on L30 due to an electronic failure. L31 proved to be the undoing of George Angelidis as he ran afoul of a GTE in the Esses that forced a prolonge pit and ended what had been very bright chances at a podium finish.

Despite the series of issues within the LMH field, the fans were still treated to some tremendously close racing, particularly that between Ross and the chasing Overton, the two cars locked again into a small gap lap after lap.

The latter stages of the race saw Graf build a strong lead over his challengers, but a late “splash and dash’ pit by Brian Hall meant an opening for Tami, who gambled on his fuel and was rewarded with 2nd place finish for his McLaren Senna over the chagrined Hall. After holding off a succession of serious challenges by Ross coming of the second pit stop that had the fans on the edge of their seats for several laps, Overton was able to keep a cushion over his rival to take the AM win.

In 3rd place was a disappointed Tom Aiken, who took his points from the pits, having been forced to retire from damage on L43. 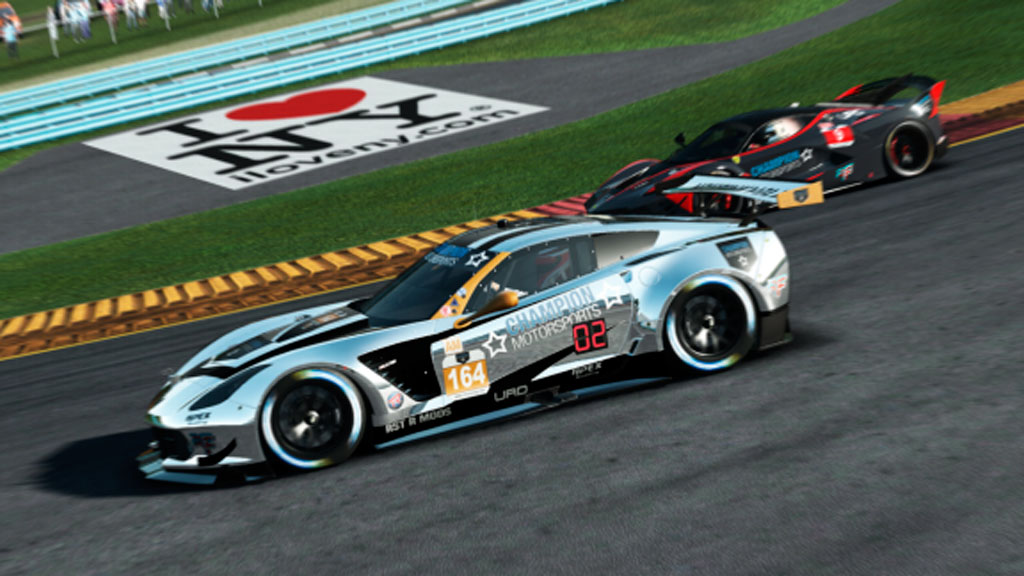 It was not just the LMHs that provided the fans first-class entertainment – the GTE field was alive with close and highly competitive racing from start to finish.  While Jon Uyan kept his Ferrari 488 at the front of the combined field, Walker and Chen kept themselves competitive as they worked to spring clear of the AM field – and John Maher was not being cooperative in the least!  It was not after the first pit cycle and issues with a pit penalty that Chen was able to clear the determined AM driver and concentrate on chasing the PRO leaders.

Those issues led to the untimely retirement of Maher to give Rodger Gabryszak, also a newcomer to the series, the AM lead as he doggedly chased Chen.

With an early pit by PRO class leader Uyan, Walker was able to claim the lead and set up a high-drama chase to see if he could hold the lead while managing fuel and tires to race end.  Despite his valiant efforts, Walker was obliged to pit with only two laps to go, opening the door for Uyan to retake the lead and bringing his Ferrari home for the win.  Walker retained 2nd place in class over the Porsche of Chen, who had been on pace with the leaders through the final laps.

AM driver Rodger Gabryszak brought his Porsche home for his first series finish AND the first series win with the Corvette C7.R of Paul Ibbotson in 2nd.  Class championship leader David Anderson claimed the final GTE AM podium spot after a difficult race that saw him drop off the pace due to spins and heavy damage early on. 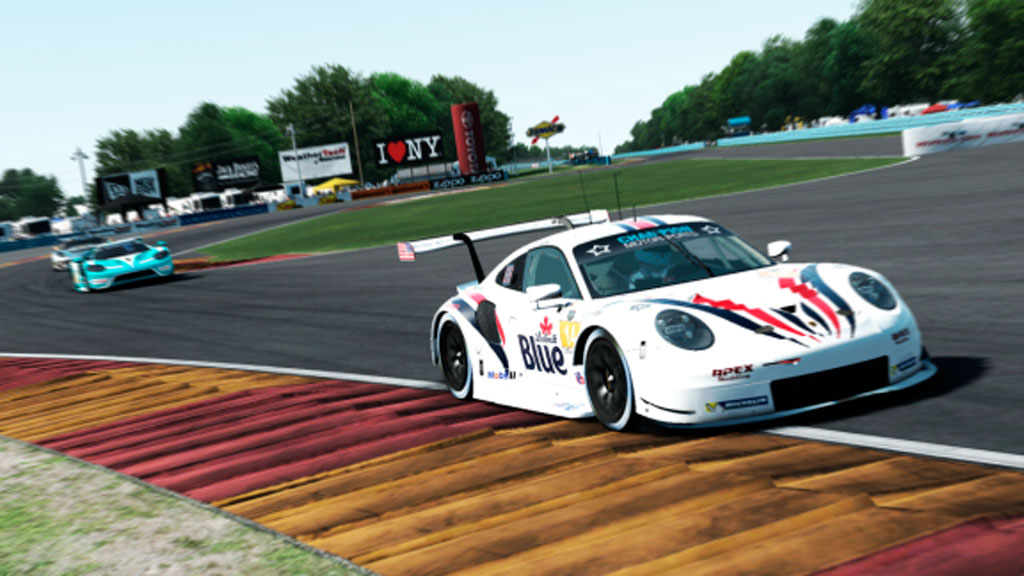 It was a well-satisfied reduced-capacity crowd that departed Watkins Glen that night, having seen some of the closest racing from the series to date. The drivers showed that they were clearly alive to the opportunities presented by the absence of several highly-ranked drivers and several able to profit handsomely from their efforts.

With newcomers Gomes and Gabryszak poised to unsettle the races in the LMH PRO and GTE AM championships, everything is still out there to play for as the VMSC gets ready to enter the second half of the season.

Finally, in a race dominated by some very close racing, it was LMH PRO driver JT Tami that claimed the “Top Mover” honors, taking his start from the back of the LMH field up 7 places to finish 2nd overall. 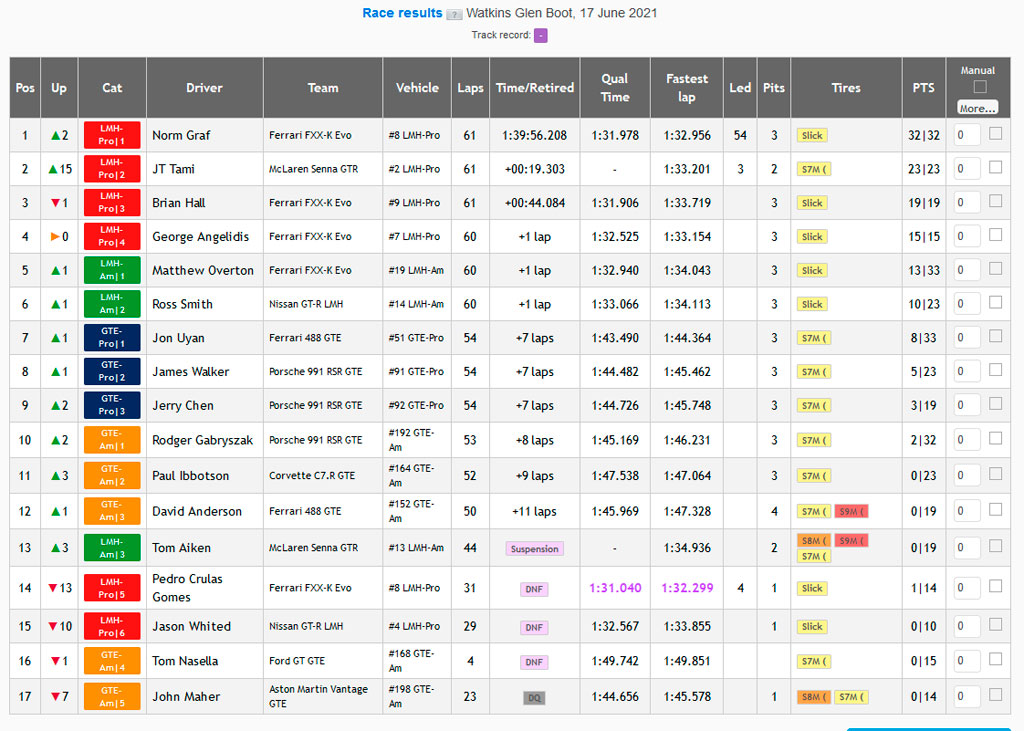 The VMSC now departs the US to return to Europe, with the next stop scheduled at the historic and super-fast circuit at Monza. Join us for all the action on 8 July for the 60 Minutes of Monza!

With 6 races complete, the championship battles are starting to shape up! 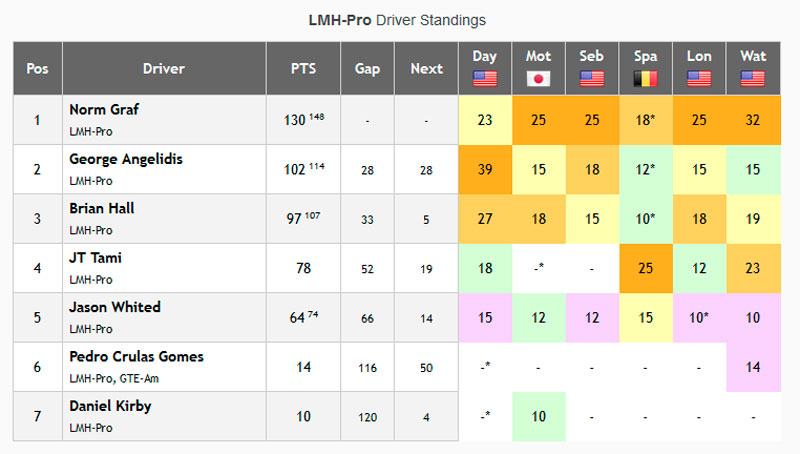 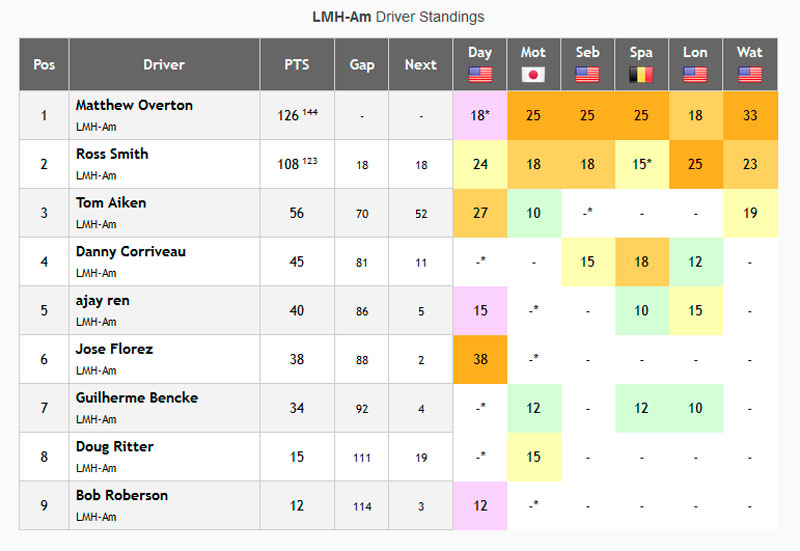 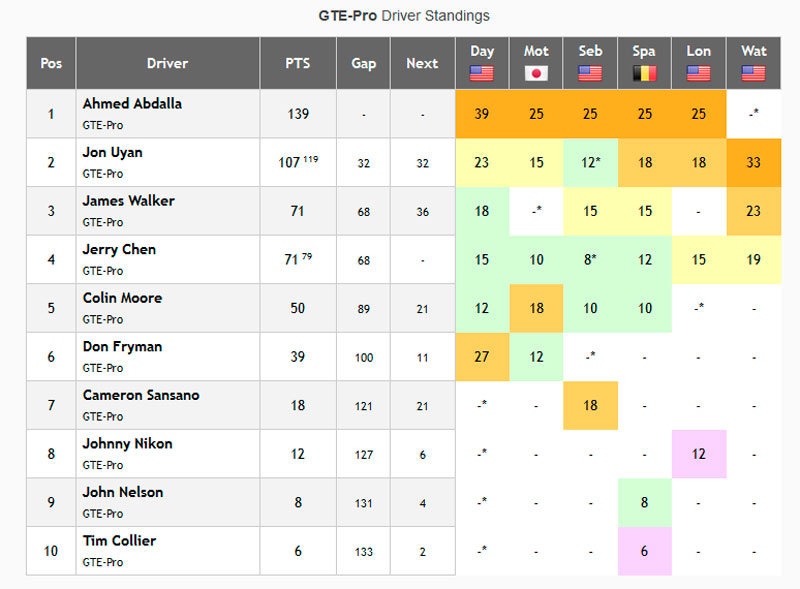 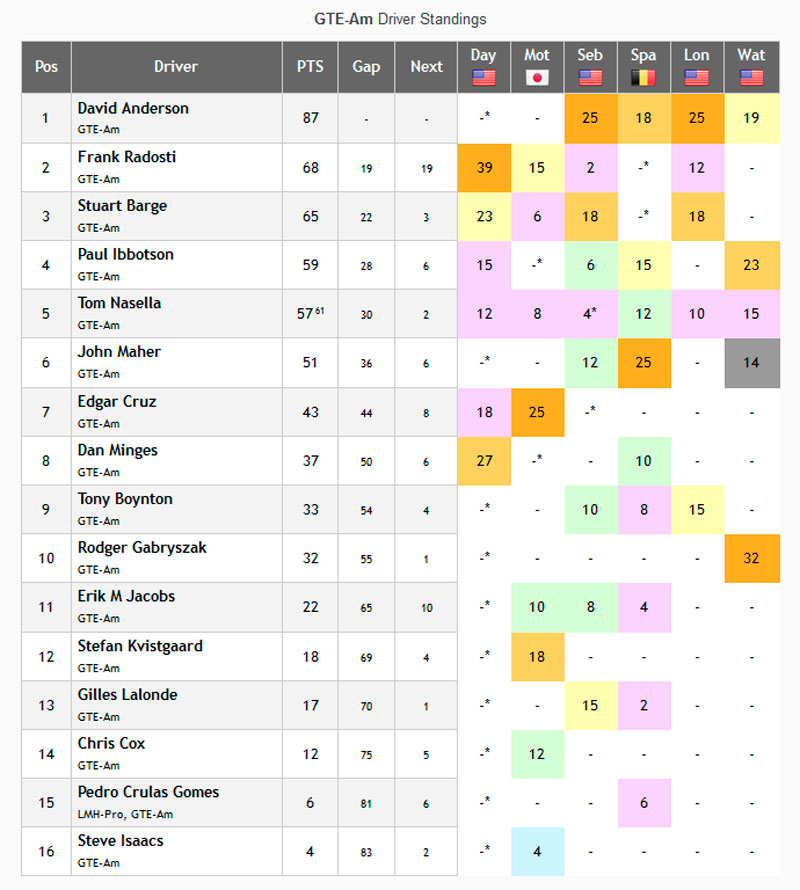