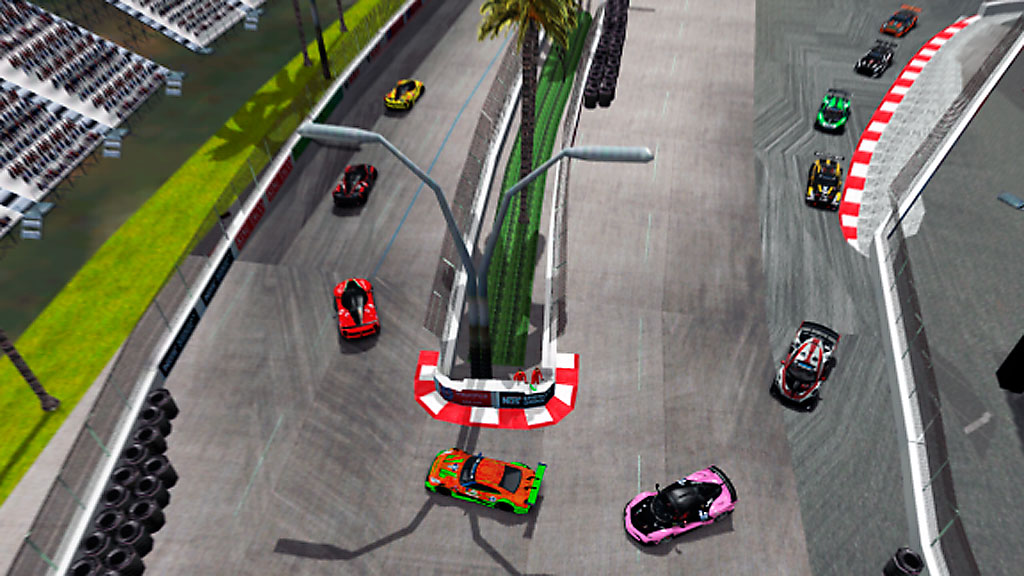 May 13, 2021 – It was back to the USA for the VMSC and the always demanding street circuit at Long Beach California. Beautiful skies greeted the 19 teams (10 LMH/9 GTE) on their arrival and the weekend carried on in the same manner, providing for some excellent racing conditions.

Qualifying was as ever, hotly contested, with Norm Graf setting the crowd abuzz, seizing his first pole position of the series with a 1:12.241 in his Ferrari FXX-K. Brian Hall and George Angelidis, also in Ferraris, completed a lock-out of the top spots in LMH PRO for that manufacturer, an indication of things to come in the race.

In LMH AM, Ross Smith and his Nissan G-TR were only slightly behind the top PROs, with a 1:12.603, which was only just ahead of the Ferrari driven by Matthew Overton. Danny Corriveau and his Nissan rounded out the top qualifiers in class, another strong qualifying for the manufacturer after was an indifferent start to the championship.

It was perennial polesitter Ahmed Abdallah that claimed top GTE PRO honors in his Ford GT with a 1:17.861, well clear of the Ferrari 488 of Jon Uyan and then the Porsche 991 RSR of Jerry Chen. In the GTE AM, it was the Ferraris of Stu Barge (Ferrari) and David Anderson followed by the Corvette C7.R of Frank Radosti with less than a second covering the three. 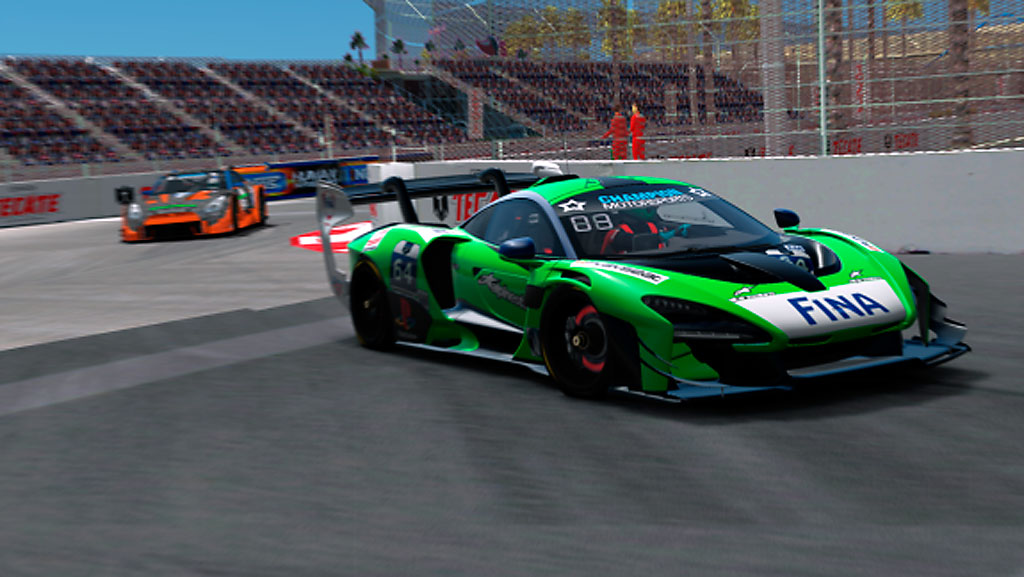 The LMH field got a clean and fast start at the green flag with the pace accelerating lap after lap. PROs Graf, Hall, and Angelidis slowly drew away from the rest of the PRO field, but not from each other.

For the five AMs, they hung together doggedly until Corriveau came in to serve his penalty with Ren and Bencke then losing touch with the front runners. While Overton was able to slip by Smith due to a rare error, the place and more was regained by Smith on L19 when Overton missed a braking point, was forced to pit for damage, and then serve a penalty for speeding in the pits.

After the pit cycle, little had changed for the order in either LMH class although the distances between cars were lengthening. As the race wore on, both Corriveau and Bencke were required to pit for damage, leaving Overton chasing Ren’s McLaren Senna with 5 laps to go while PRO JT Tami was taking a serious run with his Senna at Angelidis.

Overton, benefitting from a miscalculation on fuel by Ren, was able to pass to claim second place however despite some thrilling racing in the final laps, Tami was unable to overcome the final gap and had to settle for 4th place. 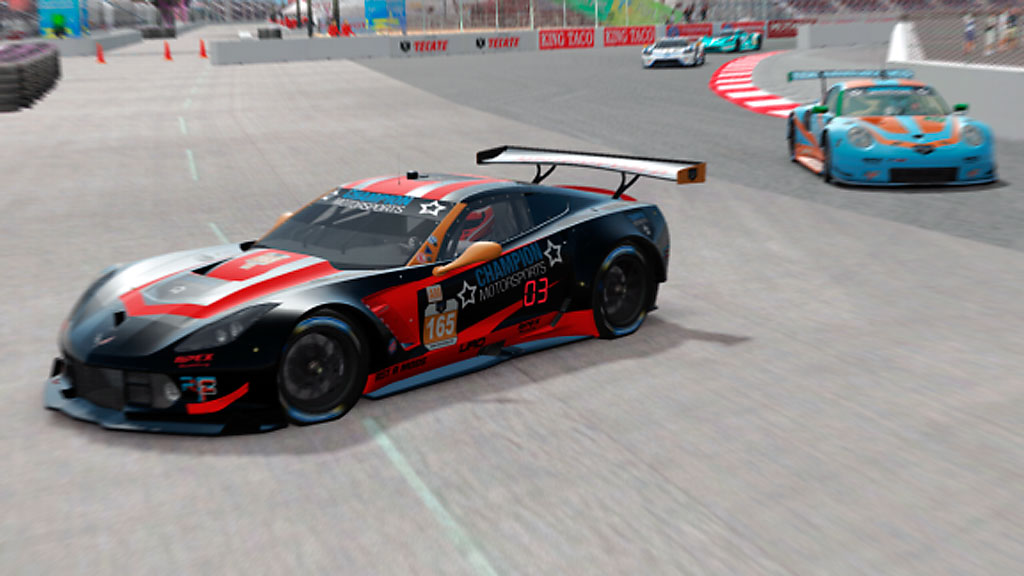 The GTE field also launched the race cleanly despite the tight conditions at Long Beach, with Abdallah opening up a small lead on Uyan that he maintained through to the pit cycle, both cars steadily growing the gap to the rest of the PRO field, led by Jerry Chen’s Porsche.

Barge found himself in a tighter race, with both Anderson and Radosti keeping the gap close and the leader in sight. The lead GTE AM group was down to 2 by lap 17 when Radosti spun and lost a wheel, ending his race.

Through the pit cycle both the PRO and AM fields maintained their order and like the LMHs, found the gaps growing except for Barge slowly reducing the gap to Anderson, but he ran out of time and laps before he could mount a serious challenge to regain the lead. 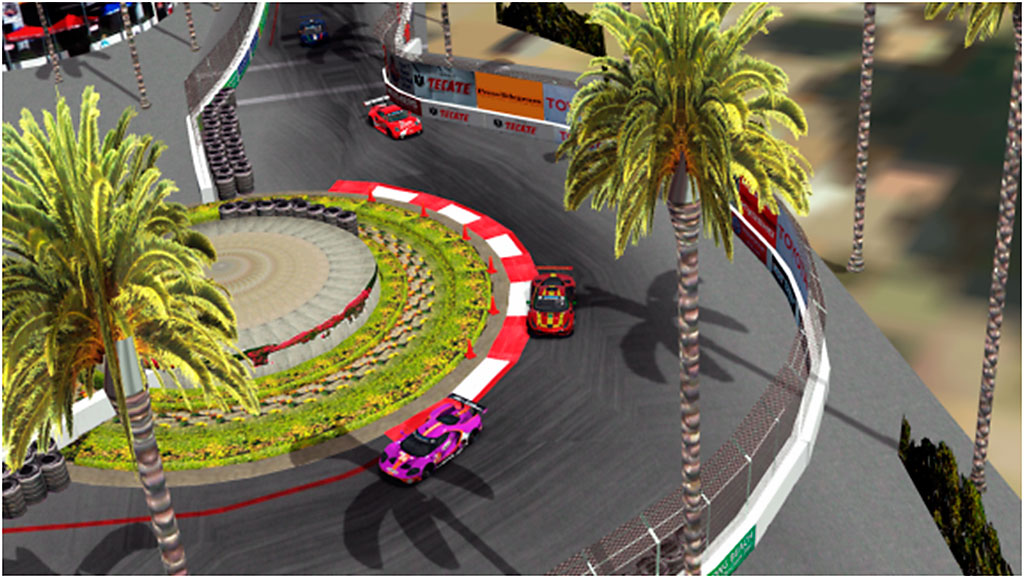 Long Beach proved to be a very welcoming venue for Ferrari, with 4 of the podium positions in LMH and 3 in GTE. Nissan, with their win in LMH AM, continued to see strengthening results, as did McLaren with a podium in LMH and GTE while Porsche was able to add 2 GTE podiums to their trophy cabinet as well.

In a race characterized by consistency and opportunity for advancement coming only from errors, it is unsurprising to note that 7 drivers shared the ‘Top Mover’ award, each moving up but 2 places from their starting grid placement. 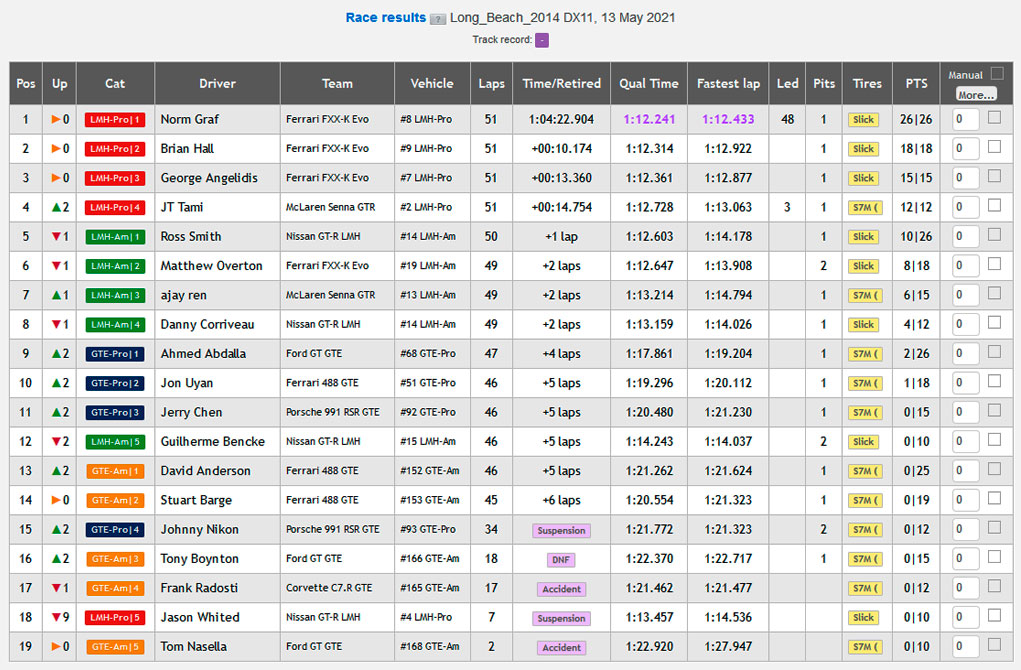 Next Up, Watkins Glen

The teams now leave the west coast of the United States for Watkins Glen with the next race scheduled for June 17th. See you all there!

Now 5 races into the championship, it is time to update on the full race standings: 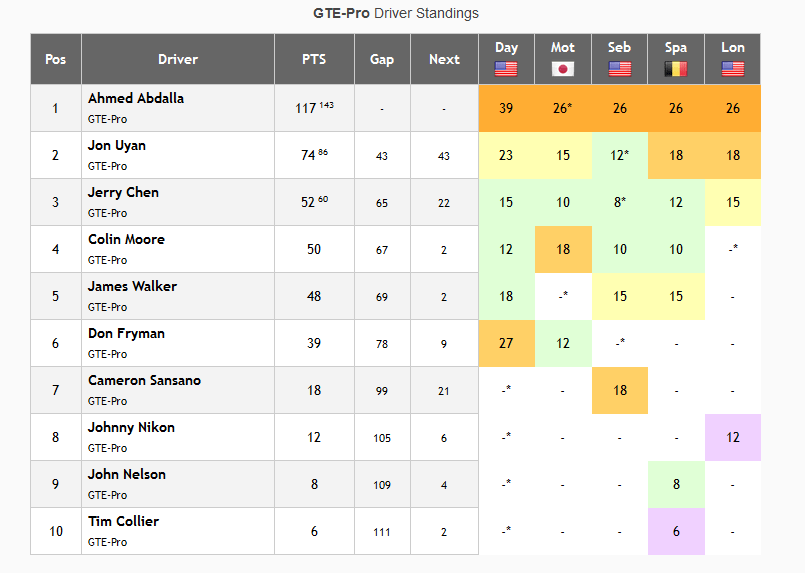 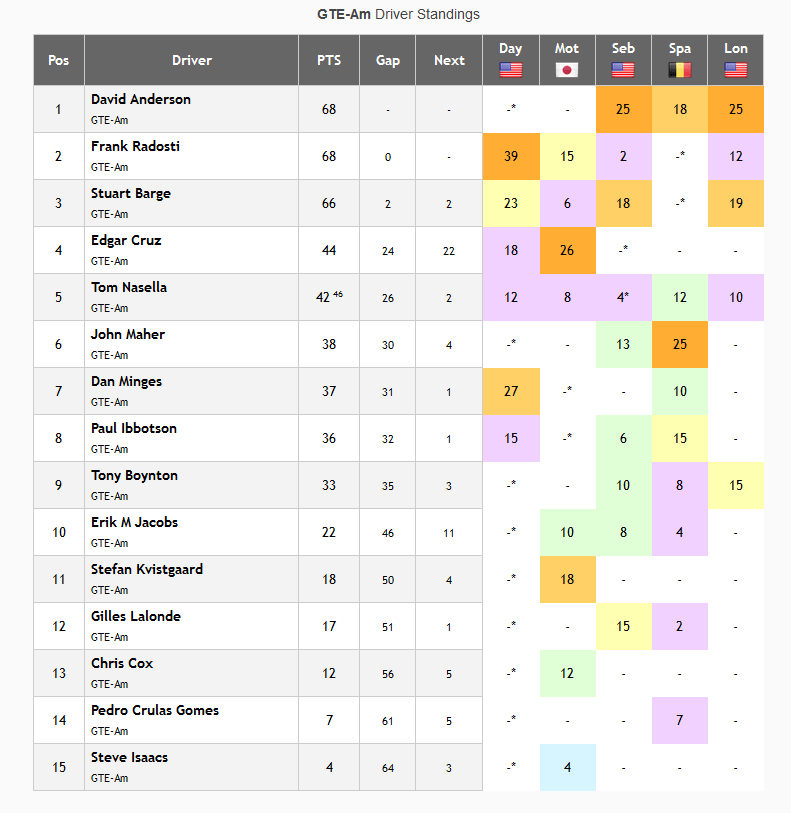 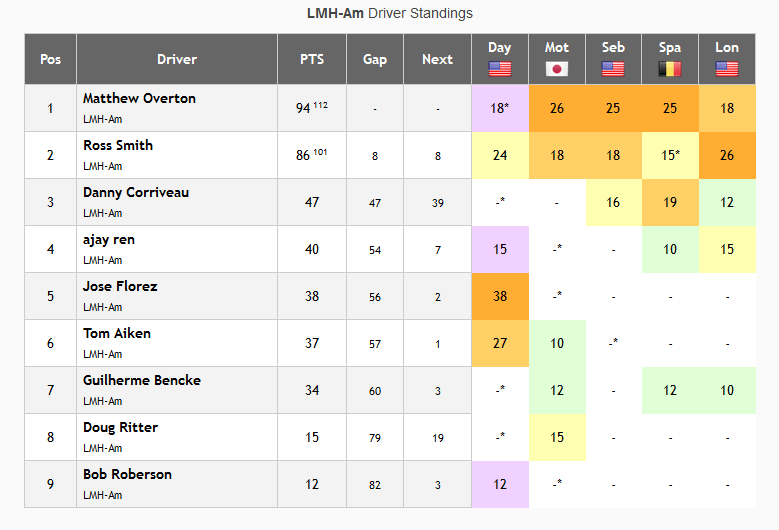