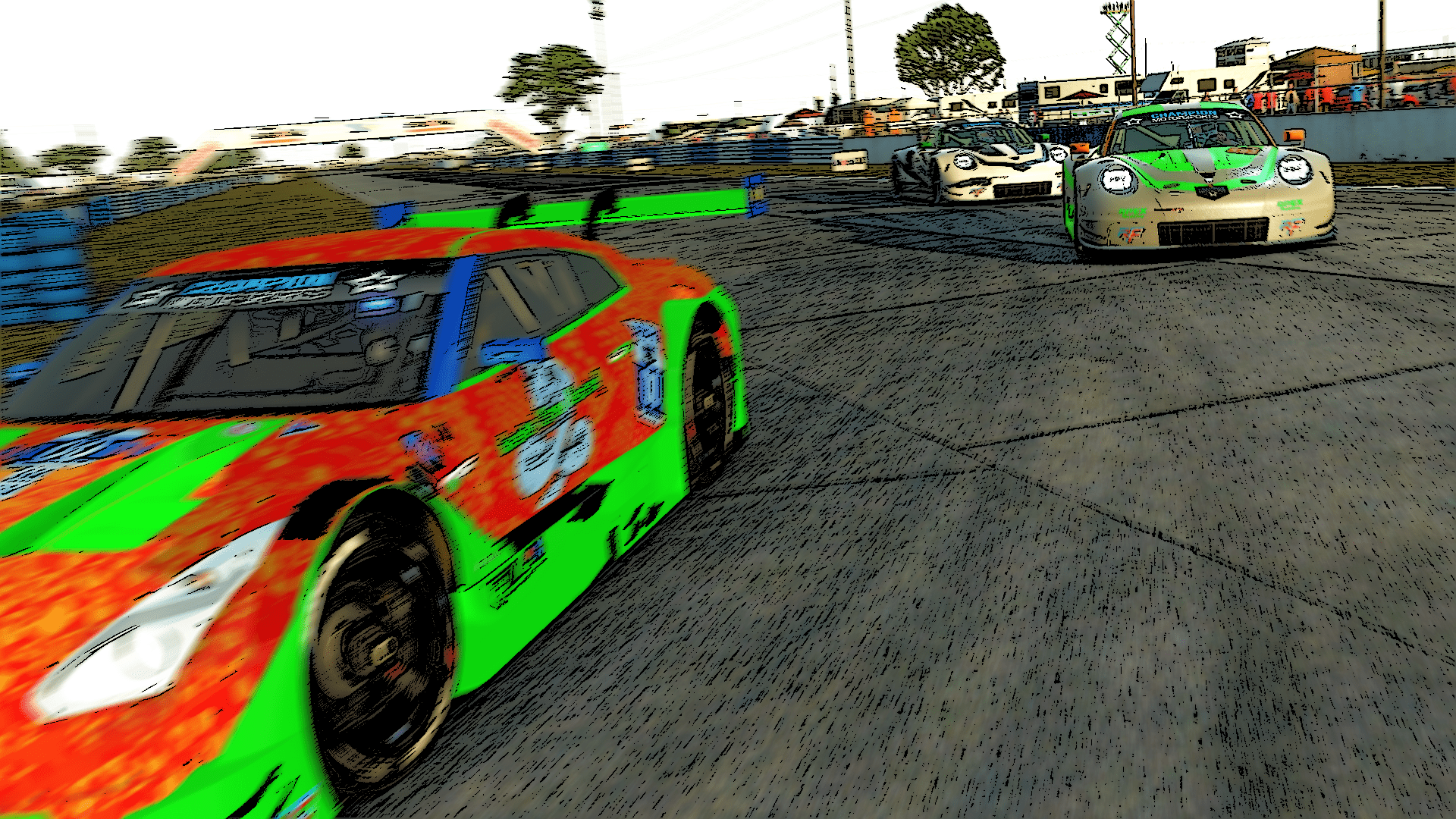 March 11, 2021 – No rest for the drivers and teams of the VMSC as it was back to Sebring for the third round of the series. Like Daytona, the race would feature both day and night driving as the drivers fought the bone-shaking and suspension-breaking surface of this historic track. Despite some concerns over the weather in the lead-up to the race, the furrowed brows disappeared as quickly as the clouds with the drivers enjoying the cooler temperatures that stood in contrast to the very hot racing that they delivered.

22 drivers raced over the weekend (7 LMH and 15 GTE) with the biggest news being the entry of CMS CEO David Anderson in the GTE AM class, driving a Ferrari 488 that had been provided and prepped at short notice by Ferrari USA just in time for qualifying. Anderson downplayed any suggestion that this would put him at a disadvantage, telling reporters before getting out on the circuit that “I know this track pretty well”. Also appearing for their first VMSC race were fellow GTE AM drivers Gilles Lalonde, John Maher, and Tony Boynton, LMH AM driver Danny Corriveau and GTE PRO driver Cameron Sansano.

In striking contrast to Motegi, it was Nissan that held the advantage in both LMH classes, as Jason Whited took the overall pole with a 1:46.164 and Danny Corriveau followed up with a 1:46.993 to take the LMH AM honors in his maiden event.  With only Nissans and Ferraris at the race since McLaren had opted to focus on an extended testing and development phase with their supported drivers, the table was set for an epic contest.

GTE Pro series leader Ahmed Abdallah continued his string of qualifying success in the face of a strong challenge by newcomer Cameron Sansano, delivering a 1:58.127 in his Ford GT, just .2s ahead of the Ferrari 488.  GTE AM saw John Maher pick up his first pole for that class – in his first appearance – with a 2:01.168 in his Aston Martin Vantage, handily ahead of Tom Nasella’s Ford GT. 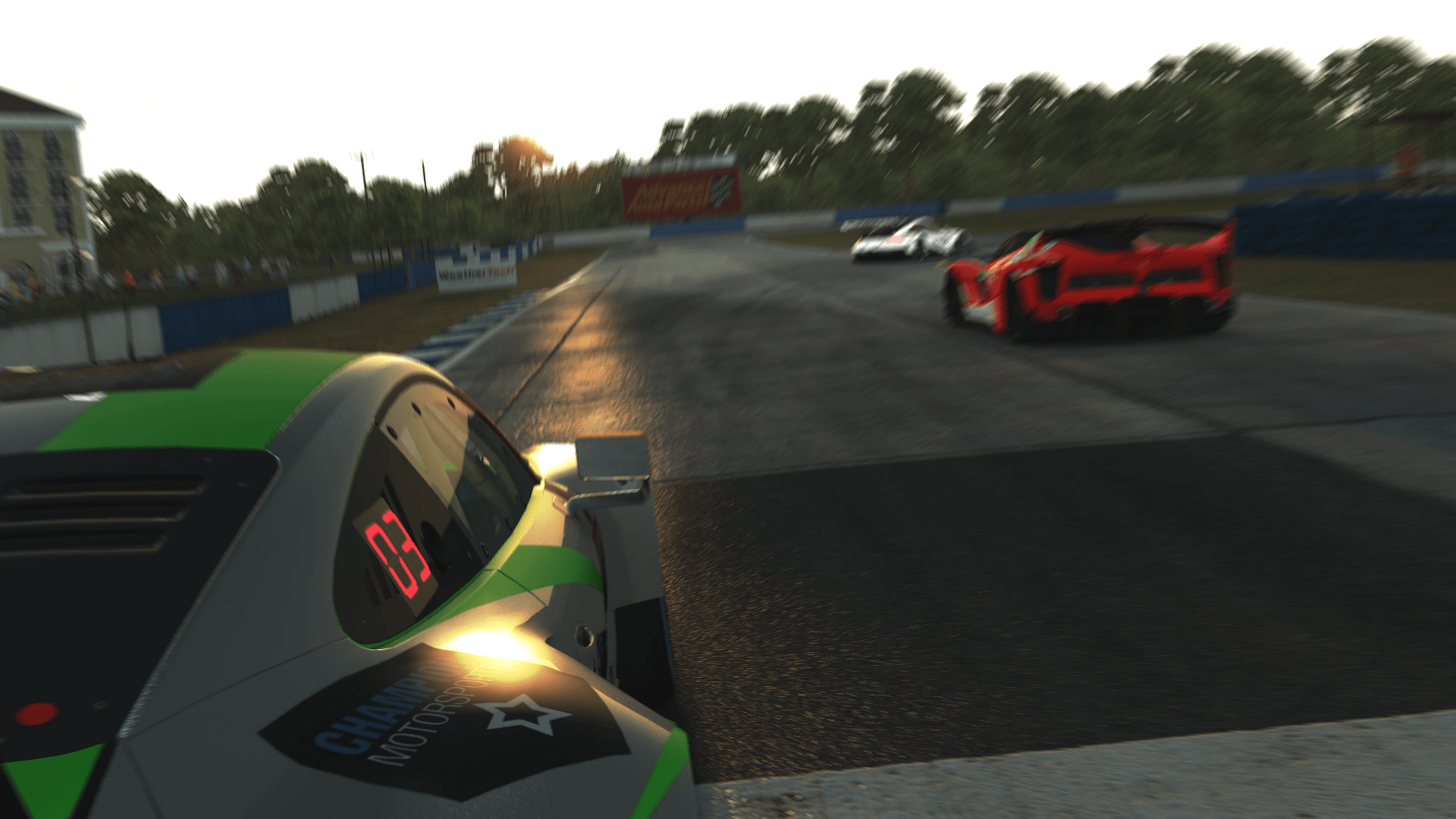 It did not take long for the standings in LMH to be upended.  The Hairpin proved to be the undoing of Danny Corriveau on the first lap as he misjudged the braking and clattered off track, collecting Norm Graf at the same time. Ross Smith was able to take advantage of the situation to leap into the LMH AM lead, pursued closely by Matthew Overton as they both worked to remain in contact with the LMH PRO leaders.  By lap 3, Graf had already charged through the two LMH AM drivers and by lap 9 had seized the race lead, having smoothly reeled in the leading cars with what appeared to be little effort, even in heavy traffic. At the same time, Overton took advantage of a Smith mistake in Gendebien to take the LMH AM lead.

The drama in the LMH field continued, with a strong recovery run by Corriveau cut short when continuing problems led to his retirement on lap 15.  Car issues for Jason Whited that led to his retirement by lap 12 and then a disastrous pit cycle for Brian Hall combined to leave Ferrari driver George Angelidis in a strong P2 that he never relinquished.  It was Graf over Angelidis for the two top places on the podium, with Graf having extended his lead to standing 39s clear by race end.  Overton took advantage of more trouble for Hall to move into an overall P3 as the laps remaining wound down, holding on despite a self-induced ‘off’ at Tower that could have easily ended his race, to take the LMH AM win over Smith and contribute to an overall Ferrari 1-2-3-4.  It was a disappointed Hall that took 3rd place in LMH PRO (4th overall), having led the race for two laps, with an equally disappointed Corriveau picking up 3rd place in AM while sitting with his dejected team in the pits. 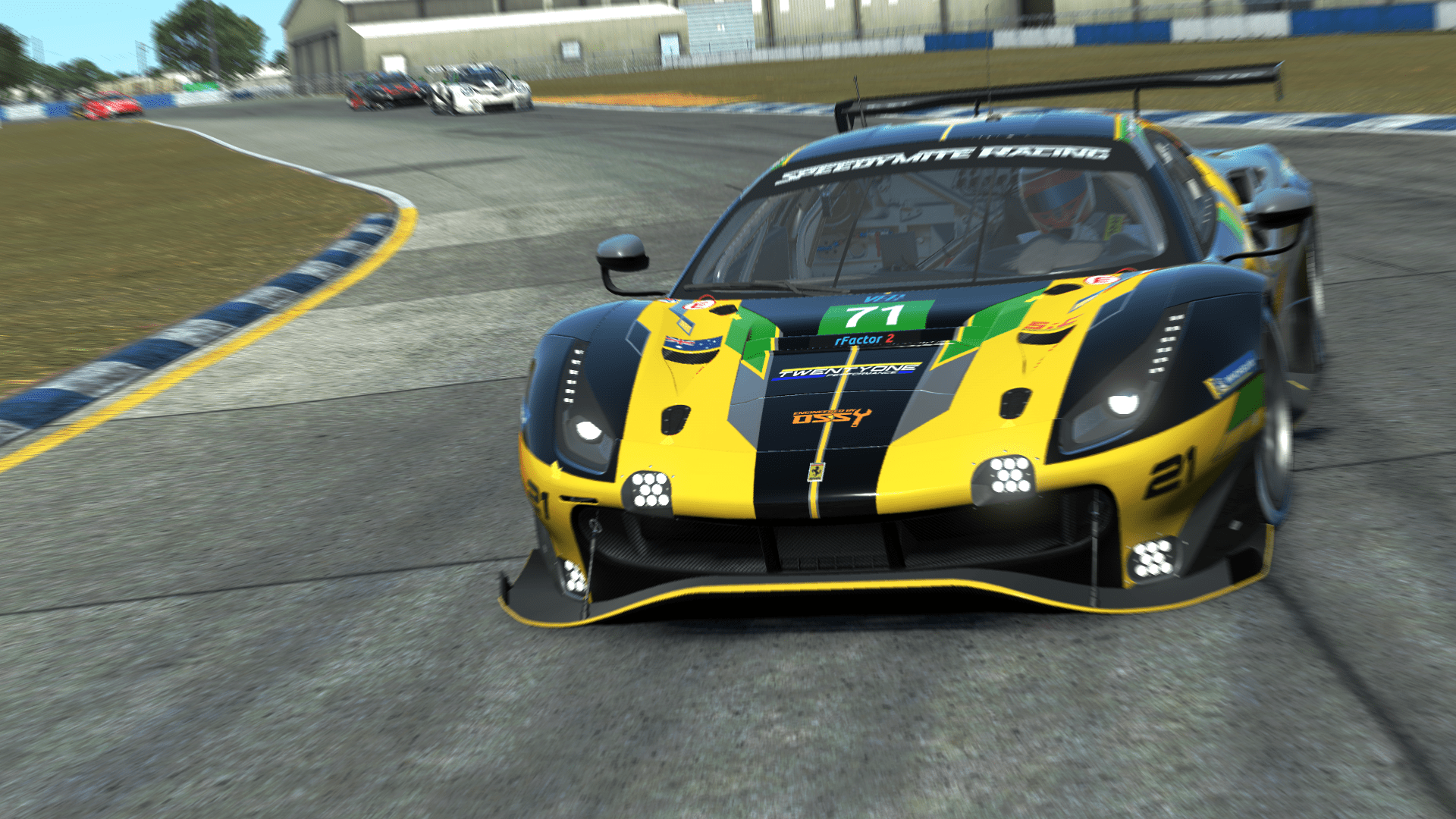 While Abdallah and his Ford GT again proved to be too much to handle, it was not a lack of trying on the part of Cameron Sansano in his Ferrari 488. Fans worldwide were treated to a thrilling battle between the two PRO drivers for the entire race, matched by a race-long struggle between Jon Uyan and James Walker for the final podium in the PRO category. While Abdallah was able to ease himself a small cushion over the course of the race, it was not until very late that the tension over the final position disappeared when Uyan was awarded a penalty for speeding the pit, leaving Walker to take the final podium spot.

There was plenty of drama in the AM class as well. While John Maher launched himself into a commanding GTE AM lead early in the race, Stuart Barge and David Anderson provided plenty of action for the fans. As Barge fell off the pace as night fell, it was a surprise miscalculation – and pitlane penalty – for Maher that upended the race result. As a result, Anderson took the class win, followed by Barge and Gilles Lalonde, with Maher relegated to 4th.

When asked the next day, Maher admitted “I have been tossing in bed all night trying to figure out how I messed up the last lap of my race so badly so I got up and watched the replay. I was running first in class and sure that I had one more lap to go and hadn’t put quite enough fuel in so into the pits I go (and gave myself a stop and go penalty for speeding in the pits) while not realizing that Norm Graf had just passed me on the back straight and my race would be over when I crossed the finish line. I am going to put that one on the top of my list for **** *** moves!”

While Nissan looked to have finally put the powerful GTR into the harness, the promise of the qualifying positions could not be turned into race success. Instead, it was another dominating performance by Ferrari with four podiums in LMH and then three in GTE. With a podium in each of the two GTE classes, Porsche left Sebring almost jubilant however for the rest of the teams, including Ford (where only Adballah looks confident), it was dark faces and grim huddles as they work searchingly in pursuit of a winning formula. 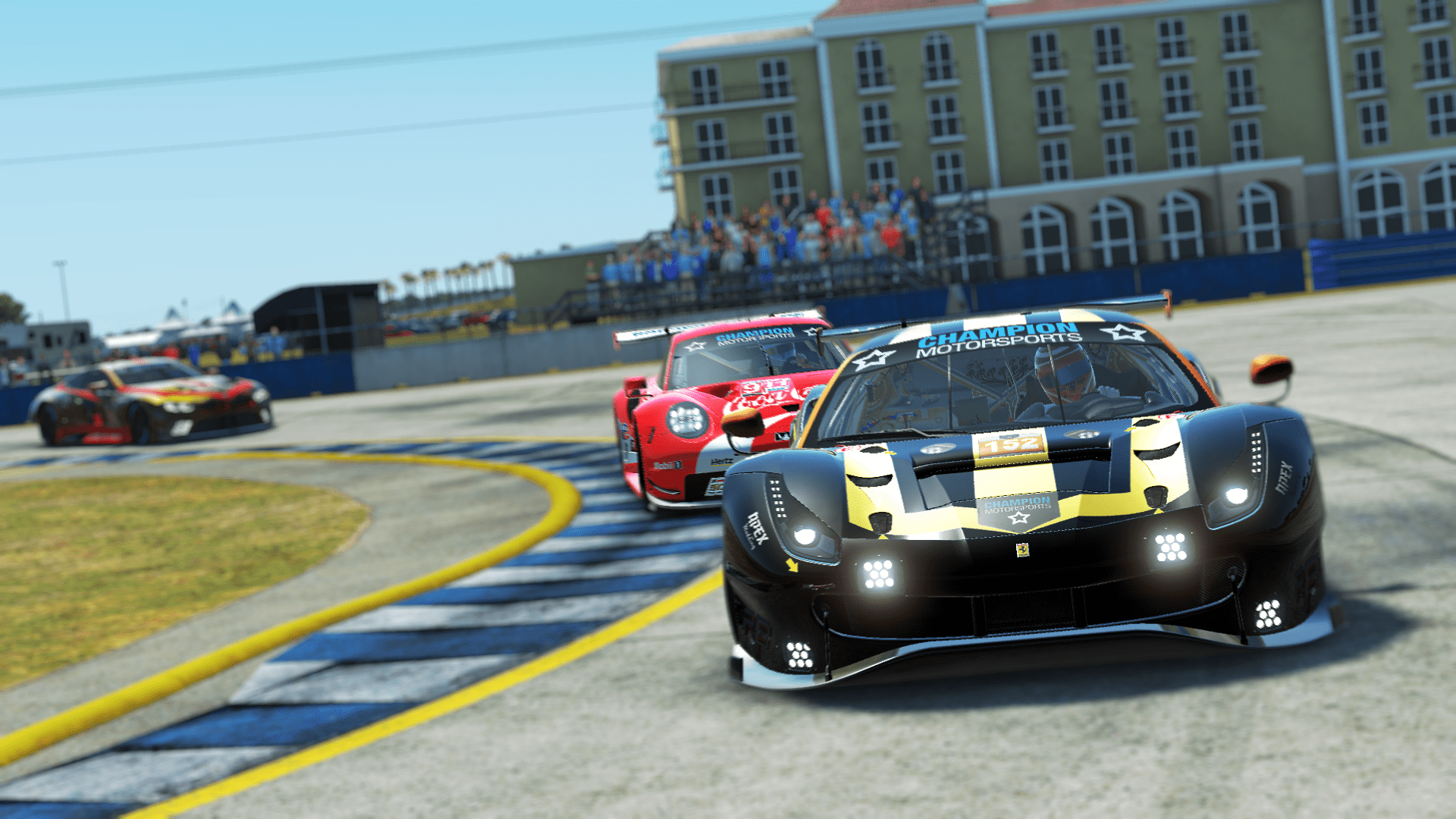 On the drivers front, the addition of Corriveau, Sansano, Maher, and Anderson to the line up has provided some additional action to the championships with the fans hoping they decide to become regular competitors!

The next stop in the VMSC calendar is Spa on April 22nd.

Championship
With now three races complete, the championship standings are as follows: