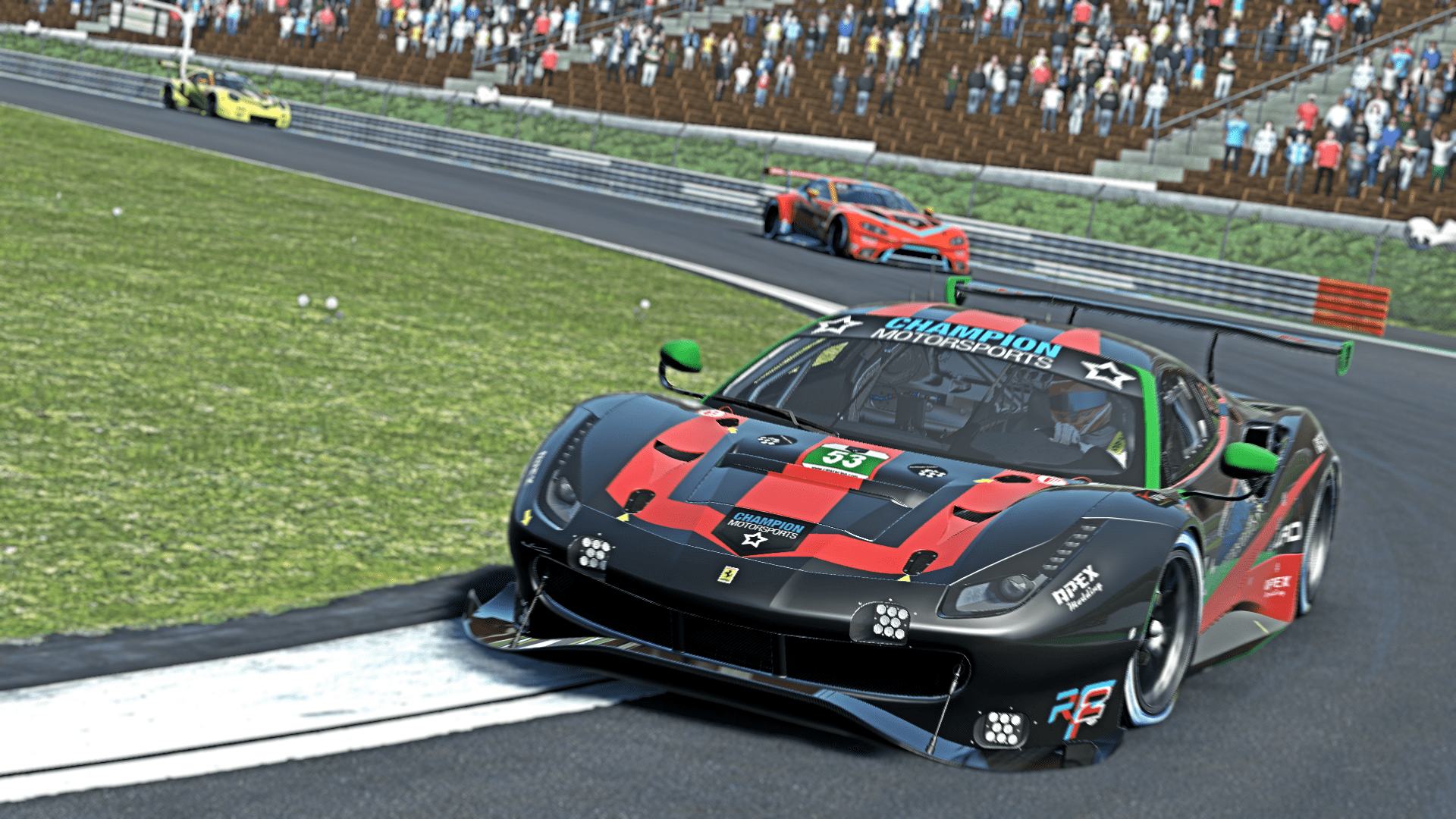 February 18, 2021 – For the second round of the Virtual Modern Sportscar Series, the drivers and their support teams made the round-world trip from Florida to meet the rising sun in Japan to test themselves against the Motegi circuit in the Tochigi Prefecture.

Conditions were almost ideal throughout the weekend, with all the visitors remarking on the excellent facilities and the support they received from the local organizing committee. Enjoying the weekend most fully was the Ferrari factory delegation, hosted to the event by their Nissan colleagues who were to be disappointed by the results of the race at their ‘home’ track.

While not every driver was able to make the long trip – with Daytona LMH AM winner Jose Florez and GTE AM 2nd place finisher Dan Minges among them – it was still a field of 23 drivers that took to the track. Including newcomers to the series Dan Kirby, Doug Ritter, and Guilherme Bencke in LMH, as well as Stefan Kvistgaard, Chris Cox, Erik Jacobs and Steve Isaacs in GTE, it was a total of 10 LMH and 13 GTE vying for their starting positions. Technical difficulties meant that newcomer Steve Isaacs was not able to grid for the race, a huge disappointment for the entire team given the efforts made to join the championship.

With the stellar performance at Daytona to inspire him, LMH PRO driver George Angelidis showed that he was equally at home on the traditional road tracks, setting a 1:36.404 for the overall pole in his Ferrari FXX-K. With rivals Jason Whited, Norm Graf, and Brian Hall stacked up within .2s behind him, the tantalizing potential for a close and hard-fought race was apparent. In LMH AM, Matthew Overton’s 1:37.303 secured pole for that class in another Ferrari with a comfortable 1.5s margin over Ross Smith in his Nissan GTR. Ahmed Abdallah’s Ford GT was also comfortably in the GTE pole position, his 146.997 almost 2s clear of his closest challenger, Colin Moore in the Corvette C8.R. It was a bit tighter in GTE AM, with top qualifier Edgar Cruz placing his Porsche 911 RSR only .5s clear of Stuart Barge in his Ferrari 488.

At the green flag, as expected a tight battle developed quickly amongst the top four LMH, only to end suddenly when Whited and Graf tangled slightly in T1 on lap 3, leaving Angelidis and Hall still battling closely. By lap 9, Angelidis had been forced to cede the lead to Hall’s FXX-K, but they continued to pace each other closely throughout the race. In the meantime, Graf, recovering from his earlier difficulties, patiently chased down the two leaders through the intervening traffic, passing both for the lead on lap 20 when they had difficulties at the pit entrance. In his pursuit, Graf also set the fastest lap in the race, a 1:36.676, just .2s shy of the top qualification time and putting down another Ferrari marker for the race! By the chequered flag, Graf had grown his lead to 20s to take the overall and LMH PRO to win, with Hall taking second place by less than 2s over Angelidis. It was a podium sweep for Ferrari in the signature class of the series and continued to point to some serious work needed by both Nissan and McLaren in the remainder of the championship.

It was Matthew Overton claiming a 50s victory over his closest rival, Ross Smith, and taking away the fastest lap of the race honors in his class as well, setting a race lap within .3s of his qualification time. While the Nissan of Jason Whited finished ahead in the race to take 5th overall, it was the 2nd place in LMH AM was the brightest light to shine for Nissan in an otherwise dismal race for the manufacturer. Completing the LMH AM podium was Doug Ritter in his McLaren Senna GTR driving his first VMSC race, a strong finish that that bodes well for the future.

Ahmed Abdallah was once again the story of the GTE PRO race, picking up from where he finished at Daytona. Racing his Ford GT across the finish line a full lap ahead of Colin Moore and his Corvette C8.R, he completed his hat trick for the race with a Class-dominating 1:47.647 race lap. All eyes were on both Moore and 3rd place GTE PRO finisher Jon Uyan in his Ferrari 488, who was closing the gap throughout the race but could not get to a passing opportunity before the race end. Don Fryman in his Corvette C8.R claimed ‘top climber’ honors for the race with his three-race positions gained at the finish compared to his gridding.

GTE AM provided some of the most anticipated racing of the event. While Edgar Cruz in his Porsche 911 RSR remained tantalizingly out of reach in front, the trio of Stefan Kvistgaard (Aston Martin Vantage), Frank Radosti (Corvette C8.R), and Chris Cox (Aston Martin Vantage) all remained within a minute of the class leader – and each other! With the challenges of managing both the lapping LMH as well as lapped GTEs, the potential for the unexpected hung over them all through to the final lap. All four, however, kept cool heads, with Cruz taking both the win and fastest race lap in class, Kvistgaard claiming a strong 2nd place, and Radosti keeping Cox safely behind him to take 3rd.

It was a memorable stop in Japan, particularly for Ferrari, who in the final accounting, took four of the six podium positions in LMH as well as one in the GTE. For Nissan, it was, as the representative of the CEO was heard to say quietly as they waved farewell as their guests departed “inspiration to return the favor in Monza”.

The next stop in the VMSC calendar is the 1.2 hours of Sebring, on March 11th.

Championship
With now two races complete, the championship standings are as follows: