January 21, 2021 – The thunder was heard loud and clear last night at Daytona as the Hypercars and GTEs of the VMSC took to the track for the first of twelve rounds of action.

Weather conditions were almost perfect and provided a stunning backdrop for the landmark victory of Ferrari FXX driver George Angelidis, who scored his maiden win at CMS with a commanding performance in the LMH PRO class.

Lacking only the fastest lap and leadership of 5 race laps that fell to others while he was being serviced in the pits to complete a sweep of the race, it was nevertheless a long-held dream come true for the veteran CMS driver. 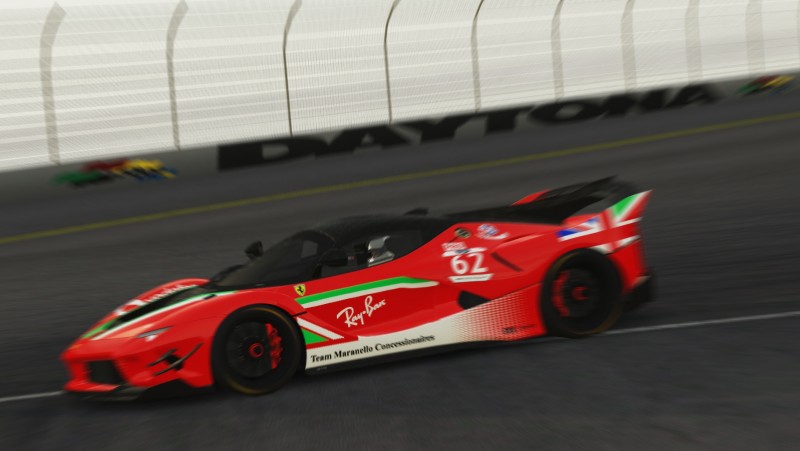 Against a strong field in the class that included Brian Hall (2nd), Norm Graf (3rd), JT Tami, and, in a quick post-race interview, Angelidis admitted it was a very satisfying and emotional win.

Newcomer Josè Florez in the LMH AM class made short work of the field in claiming the win with his McLaren Senna GTR, finishing a very strong 3rd overall in the race and only 1 minute behind Angelidis.

The demands of the Daytona road course proved too much for many of that class, with only Tom Aiken finishing the race behind him, of the 6 that started.

Ross “Tnadz” Smith picked up 3rd from the pits, having had to retire from a suspected brake failure after 61 laps.

Ahmed M. Abdalla claimed both poles for the GTE PRO class and the class win showing the field a very clean pair of heels. For the remainder, it was a see-saw battle until the completion of the final pit stops when Don Fryman was able to confirm that he would not be letting go of his 2nd place position and Jon Uyan was able to work an offset pit strategy to leapfrog ahead of Jerry Chen to claim the final podium in class.

As with LMH AM, many GTE AM drivers struggled with the demands of the road/oval course layout however not the class winner, the obviously well-prepared Frank Radosti. Well behind, Dan Minges picked up 2nd place while Stuart Barge finished 3rd, the last runner of 6 in the starting field.

Well done to all the podium finishers and all the racers for a great start to the season!

The next race in the championship will be Twin Ring Motegi, on February 18th.