With the introduction of Assetto Corsa Competizione into the sim racing world and months of testing completed, we’re proud to announce our next Monday Night Series!

With a challenging multi-class season behind us and another Esports season under our belts, the ACC chapter is being reworked from the inside out to help best foster new drivers to realize a successful career in sim racing with Champion Motorsports and beyond. Thank you to everyone who’s taken part this past season, and to those new to the chapter, welcome!

Our 6th season here is ready, designed to give the administration as many headaches as possible as we refactor our series. New formats, reworked ratings and opportunities to enter the world of Esports, and plenty more to offer down the line means plenty of testing for our new systems!

You can register for the Monday Night series here: https://forms.gle/A4ubFcWUtGFa3gVi7

Discord is required for those wishing to race with us; before every event, we hold a pre-race discussion with key details specific to the event. You can join us here at https://discord.gg/4ckmjPX

If you have any questions you can feel free to ask a question in the ACC League channel on our discord. Drivers of any skill level are welcome; whether you’re new to sim racing or a seasoned veteran, there’s great racing to be had here!

All cars will be allowed in their respective class.

The car that the driver(s) in question used during the first race is the car they will be forced to use for the remainder of the season.

Drivers will be allowed one car swap within the season in case they’re unhappy with their current choice; however this will come at a cost of all championship points earned up to the point of the swap, so please keep that in mind!

Drivers are free to register for either the GT3 or GT4 split; doing so will result in the following:

a. New members to the ACC chapter will find themselves in Split 2, where drivers are to be evaluated.

b. Standing members who raced in our previous season will be evaluated on their performance, and be given the choice of which split to run on if they qualify for both.

GT3 drivers who perform well in Split 2 will be given the option to move to Split 1, and drivers at the tail end of the Split 1 grid are considered to be “at risk” of a drop to Split 2 if their performance doesn’t hold.

To best accommodate these conditions, the server configurations will be as follows:

When drivers from Split 2 are invited into Split 1, they will be allowed to race in split 1 for a season. If they outperform those in the Wildcard positions, the formal invitation will be made to continue in Split 1. Wildcard drivers who lose their slots will be guaranteed a space in split 2 if desired. If a Split 2 driver rejects the invitation, the next Split 2 driver with the qualifications needed to move to Split 1 will be considered.

Additional splits will not be made mid-season, and all registration is first-come, first-serve! If the need for additional servers is met, we’ll adjust accordingly in future seasons. Drivers who register late will be added to a reserve list, to be called upon if slots are available.

Gone are the days of using pace ratings to split drivers; while reliable, it’s ill-suited for those who bring consistency and safety to the table before pace. The rating system is being revamped to account for those that now showcase multiple facets of what makes a great driver, including safety, consistency as well as pace (to an extent!).

Drivers now have three data points used in evaluation over the course of their time in the ACC Chapter:

All of this ties together to give us a driver’s Overall Rating, which will be used to help stewards and admins evaluate drivers on whether they qualify for split moves or Esports competitions, with more focus going towards the behavior of a driver instead of raw speed. While crashes are certainly spectacular, it hardly makes for good racing!

Safety Rating – Points, Penalties, and What to Expect

The Safety Rating comes with an additional factor as well: penalty points! Penalty points are logged alongside any penalties that a driver receives over the course of their time at CMS. The point values per each penalty are as follows:

Pace has long been the defining factor for growth in the ACC chapter, however, a long-needed shift to a focus on safety is finally underway. We hope everyone is looking forward to their evaluations!

The ACC Chapter of CMS is very thankful to SRO America for the relationship we’ve maintained for two seasons now, and look to give everyone the opportunity to showcase their talent in the world of Esports!

As such, our chapter is being developed in such a way that we can ensure the quality of drivers that take part in our events and give new drivers the opportunity to truly race their way in. Because of this, we’re working hard to evaluate everyone’s performance to ensure the opportunity goes to not just the quickest drivers, but the cleanest and most consistent as well.

Drivers who excel in the GT4 Esports series will be considered for a move to the peak of our series: GT3. As we continue through this year, we’ll work to refine and present our selection process to all drivers to avoid any feelings of confusion or discrimination, and aim to give all drivers every opportunity to present themselves in the best possible light on the global stage.

Thank you again to SRO America for this opportunity, and we hope everyone is excited for the growth of CMS in ACC Esports! 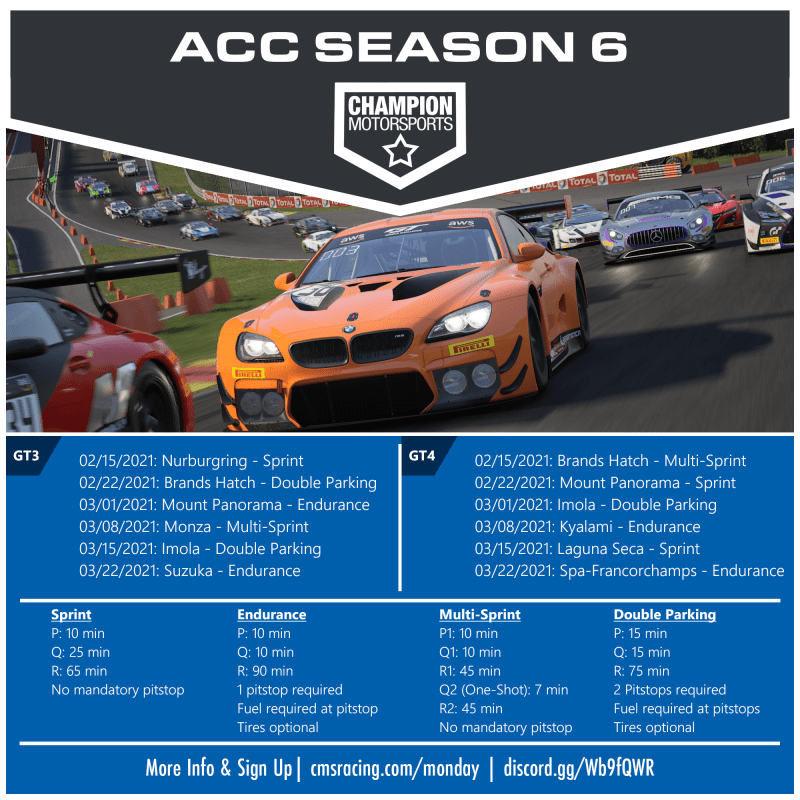 The race starts will include a full formation lap; during this lap, the following regulations are expected:

Drivers are expected to switch to double file at the start of the third sector. Note that double-file should be a true double file, not a staggered grid!

Driver classes are determined by the performance of a driver based on the seasons and official races they’ve taken part in. Three classes are available:

Drivers who recently joined and do not have a prior record must run on the qualifying server in order to receive a baseline rating. Drivers who were present in the previous season will have their previous performances determine their Class.

Please change your in-game name to your real name to make results easier to track!
To determine your Driver Rating and classification, you can find the following servers:

At the end of each race, points will be awarded to drivers that have excelled in a particular category. Available bonus points are:

Each driver is required to take one drop round during the season, where their worst result is dropped from the championship; however, any round in which you serve a penalty (not receive) cannot be nominated as your drop round.

We will be using ACC’s results files from the server to keep track of all race results and timing.

If you are involved in an incident of any sort during any session, please report it here. Please include which session and at what time in the session the incident took place, as well as a brief description of what occurred.

Penalties can be applied one of 2 ways:

Please add them to the Monday ACC Discord discussion thread.