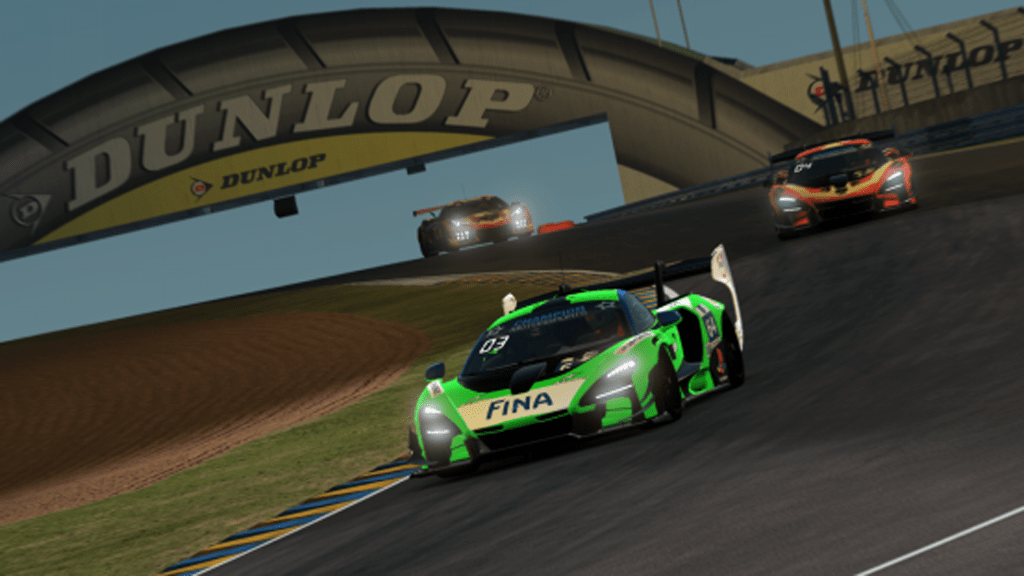 August 14, 2021 – Le Mans holds a special place in our hearts. More than any other race, it’s a crucible in which new technology is forged and trickles down to the cars that populate our roads around the world. It was with this impressive heritage in mind that the drivers and teams of not only the CMS VWSC, but the Race Craft Legends ILMS series made their way to La Sarthe for the 4.8 hours of Le Mans in a crossover event that featured driver teams in addition to the usual single-driver entries and a full 24-hour cycle. Conditions were hot but dry, forcing the driving teams to make some difficult choices on setup, tire, and fuel strategy in what was sure to be a crowd-pleasing event featuring some of the top talents from the two leagues.

With only 10 minutes for each racing class, the qualifying was sure to be supercharged as the drivers strove to get the most from the 2, possibly 3 laps available.

It was the LMH-Pro team Storm Rider Racing Nissan GT-R LMH of Jason Whited and Ben Boorman that took the overall pole with a 3:22.699, a mere 0.5s ahead of the singleton Nic da Silva in his McLaren Senna, with the Tripoloski Gorillaah Nissan of Marouane el Idrissi and Yassin Marzouq taking third in class another 0.5s behind. In the LMH-Am category, it was a McLaren parade, with the singleton Blue Flag drivers Ajay Ren (3:27.6) and Tom Aiken bookending Emil Johannson for the top starting positions in class. A noticeable absence at the top of the qualifying order was the Team Maranello Concessionaires Ferrari of George Angelidis and James Foster, who were unable to get out of the paddock due to a series of electronics issues that were only resolved just in time to get out for the starting grid.

In GTE-Pro, it was the Ferrari 488 equipped CMS PRO team of Jon Uyan, Ernest Bernaldo, and Matthew Marlow that earned the right to lead the field for the green flag with a 3:51.015, with the SMR Corkscrew Ford GT of Cameron Sansano and Vasilis Katerinakis and then Jamie McKie and Cameron Barker in their Sector 4 Aston Martin Vantage rounding out the top three. It was Matt and Mike Buice in the Trash Panda Racing Aston Martin topping the qualifying for the GTE-Am at 3:56.765, with the Champion Motorsports Ferrari 488 of David Anderson and Tom Nasella in second followed by the Go For Broke Aston Martin of John Maher and Ed Jones. 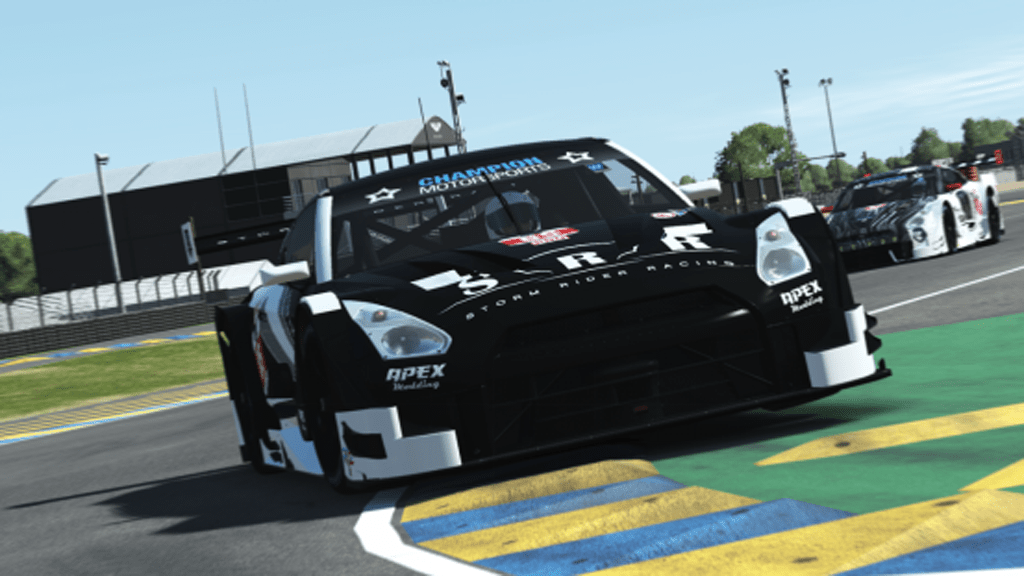 Without a doubt the top battle for the class win, in a race that saw many outstanding contests, belonged to LMH PRO drivers Jason Whited and Yassin Marzoug, who put on a fine show battling with their Nissan GT-Rs for over an hour at the last stages being separated for LESS than 1 second many occasions. Their driving partners were stalwart in their stints as well, leading to a Nissan one-two on the podium, with the Storm Rider Racing machine edging out Tripoloski Gorillaah by 3 seconds only. The Nissans did not have it all their way, however, as Nic da Silva kept his McLaren in the hunt for much of the contest, leading for 16 laps until his race came to a crashing halt and he was forced to retire on L39 after a massive accident at Carting. The Kowalski Motorsports McLaren looked poised to make a run at the front runners as well, but a missed shift resulting in a blown engine ended their race on L67. At the finish, it was the Rookie Monsters McLaren Senna of Wouter de Bruijn and Justin van der Smissen that took the final podium in class, a lap down to the leaders, an excellent return for their work in the last stint nursing their car around the track with serious suspension damage.

The LMH-Am battles were equally tense, with singletons Ajay Ren, Emil Johansson and Tom Aiken kept up a running fight, exchanging the lead until L34 when Johansson and Aiken collided crashing out and handing the lead to Ajay Ren. The eventual class leader, Ren, continued to steadily increase his lead over the rest of the field, leaving them to fight for the remaining podium positions. It was Aiken, driving a fine recovery, who topped the Snake Eyes Nissan pairing of Ross Smith and Wayne Hutchison after Smith crashed into the wall on the Porsche Curves as he was closing the gap to Ren, to claim a well-deserved second in class. 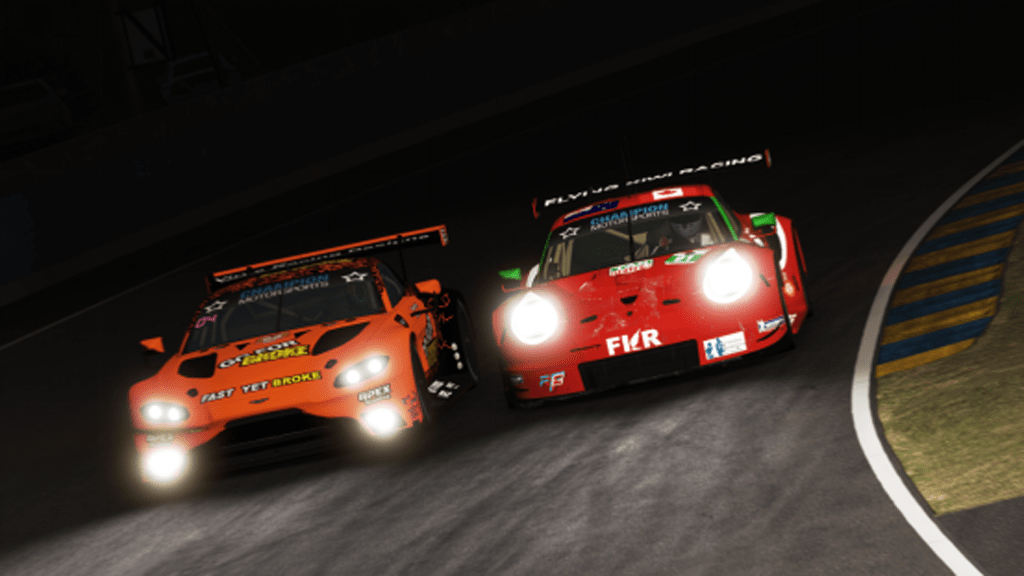 The Pro field came out of the gate charging hard, led by the Corkscrew Ford and CMS PRO Ferrari. Only seconds behind an equally intense battle was going on between Sector 4 Vantage and the Corvette C8.R of Cosimo Streppone. After the first pitstops, the field started to spread out when the CMS PRO team had a terrible time getting out of the pits and then accident damage on L18 forcing the early retirement of Streppone. The chase was then on as Jamie McKie relentlessly pursued Vasilis Katerinakis, passing him on L30 when the Corkscrew Ford suffered a complete electronics shutdown, ending what was a promising run at a top finish. From then on, McKie and Barker continued to expand their already sizeable lead to claim the GTE-Pro win, with the CMS PRO team executing an excellent recovery drive to take second ahead of the problem-plagued Porsche 911 RSR of Flying Kiwi Racing (Overton and Chen)

The GTE-Am field shot out of the gate equally feisty, with the top three qualifiers joined by the Big Bang Racing Porsche 911 RSR driven by Gilles Lalonde, keeping each other in sight through and beyond the first pit cycle. While Trash Panda Racing held the lead going into the pits, it was Jones in the Go For Broke Vantage that led coming out. The lead reversed two more times at each of the pit cycles with the Go For Broke pairing holding a 35s lead over the Buice brothers when disaster struck in the form of yet another electronics failure, dropping them well off the pace and unable to recover. While this gifted the class lead to Trash Panda Racing it was a determined Anderson that was chasing them down relentlessly, passing them for the lead on L45. Their advantage was cemented when the Trash Panda machine fell victim on L52 to the same electronics gremlin that had victimized Go For Broke, ending their drive for the podium. While Ed Jones in the Big Bang Racing Porsche and John Maher both drove hard in the closing laps, Tom Nasella was able to bring the Champion Motorsports Ferrari home for the class win, with Big Bang second and Go For Broke third in class. 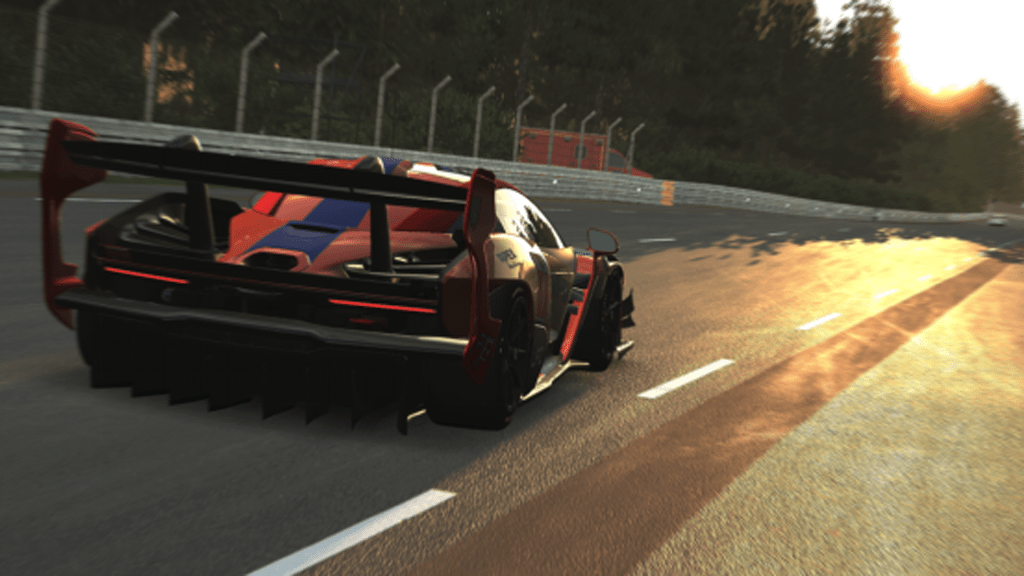 Regardless of the finishing position, it was a festive air for the teams and drivers throughout the paddock as they celebrated their participation in one of the longer CMS rF2 races to be held in some time. A testing affair, for teams and individual driver entries, it also provided an opportunity for both CMS and RCL members to measure themselves against some outside competition in a friendly but highly competitive environment. Judged by all to be a spectacular success, hopes are high that with some good planning and a little luck, events such as this will become a regular part of the CMS rF2 calendar for 2022 and beyond.

The next stop for the VMSC 2021 Modern Championship is Road America on 4 September, with a return to the regular race format.

Points including drop round