So the CMS Isle of Man Hot Lap Challenge is now complete and time to reckon with the clock. All told, 16 drivers were successful in setting AT LEAST one timed lap, which was, as almost everyone pointed out, no mean feat! 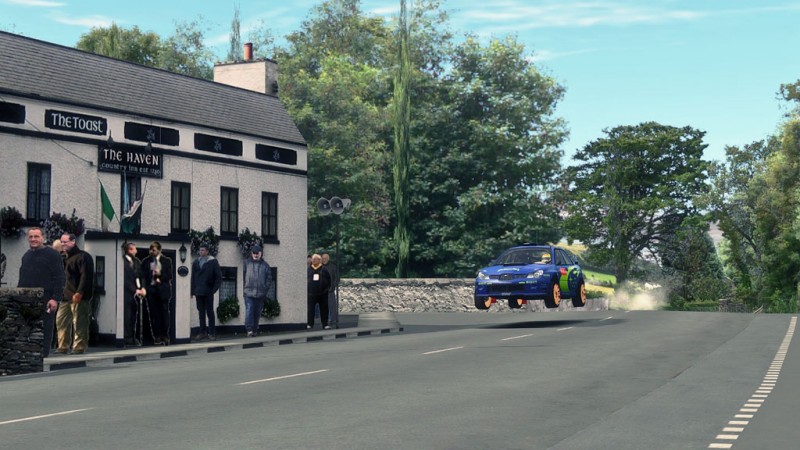 Before we get to all the winners, some notable facts and achievements from the month of time trialing.

Take the above numbers with a grain of salt, but in any event, the final tally of laps does point out that Ahmed put in over 3 times as many laps as his nearest challenger, Paul Anstey, a significant commitment of time and effort for this competition – outstanding Ahmed!

And… drumroll please… our class winners…

Each of our class winners is awarded a $10 Steam gift certificate courtesy of David Anderson and Champion Motor Sports!

Our 4 winners (chosen by random draw) of a $5 Steam gift certificate, also courtesy of David Anderson and Champion Motor Sports, are:

Congratulations to all our prize winners and thank you all for competing!

For those of you that haven’t seen it yet, take 18 minutes and watch our hot lap champion in action!

The following was the original event presentation. 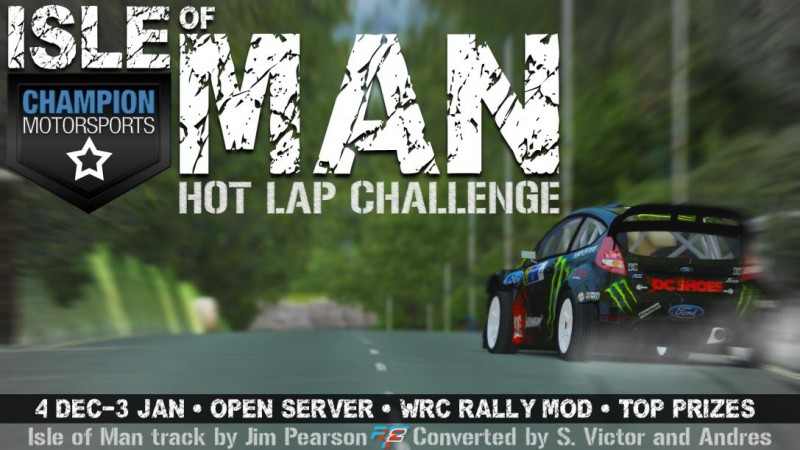 With the completion of the regular racing series for 2020 and a pause while the preparations are completed to kick off the 2021 NARS season, what would be better than having a special event?

NARS is very proud to present on behalf of Champion Motorsports a special, December-long special event that is sure to provide an outstanding challenge for sim racers of all abilities with the chance to pit themselves against a truly unique track, some super fun cars, the relentless honesty of the timeclock and of course, themselves!

We’re going to go ‘way, ‘way, ‘WAY outside of our normal race offering and heading to the Isle of Man and the (in)famous Manx Mountain course.

AND, rather than a traditional race or heat format, we’re going time trialing for the entire month!

AND to make it just that little bit more exciting again, there is some EXTRA incentive to getting your best lap on record: David Anderson, head of CMS has confirmed that there will be prizes to the drivers with the fastest laps in each class as well as to some lucky event participants through a random draw.

So, cinch down your harness, sharpen your reflexes, and let’s go!

The Isle of Man hosted its first race in 1907 which was 10 laps of a 15-mile circuit. In 1911, the race transferred to a mammoth 60 km circuit with several individual class races held consecutively, with gaps of several years due to the two World Wars. From 1946 onwards, the racing continued to expand with additional classes and assignment of World Championship status for a period of time, though significant safety concerns drove a boycott of the race by teams and manufacturers in 1976. Safety issues addressed, the circuit remains a feature in the British Championship series and continues to thrill and excite racers and spectators alike through to today. Infamously recognized as one of the most dangerous racing venues in the world, the circuit has claimed the lives of over 250 racers since 1907. 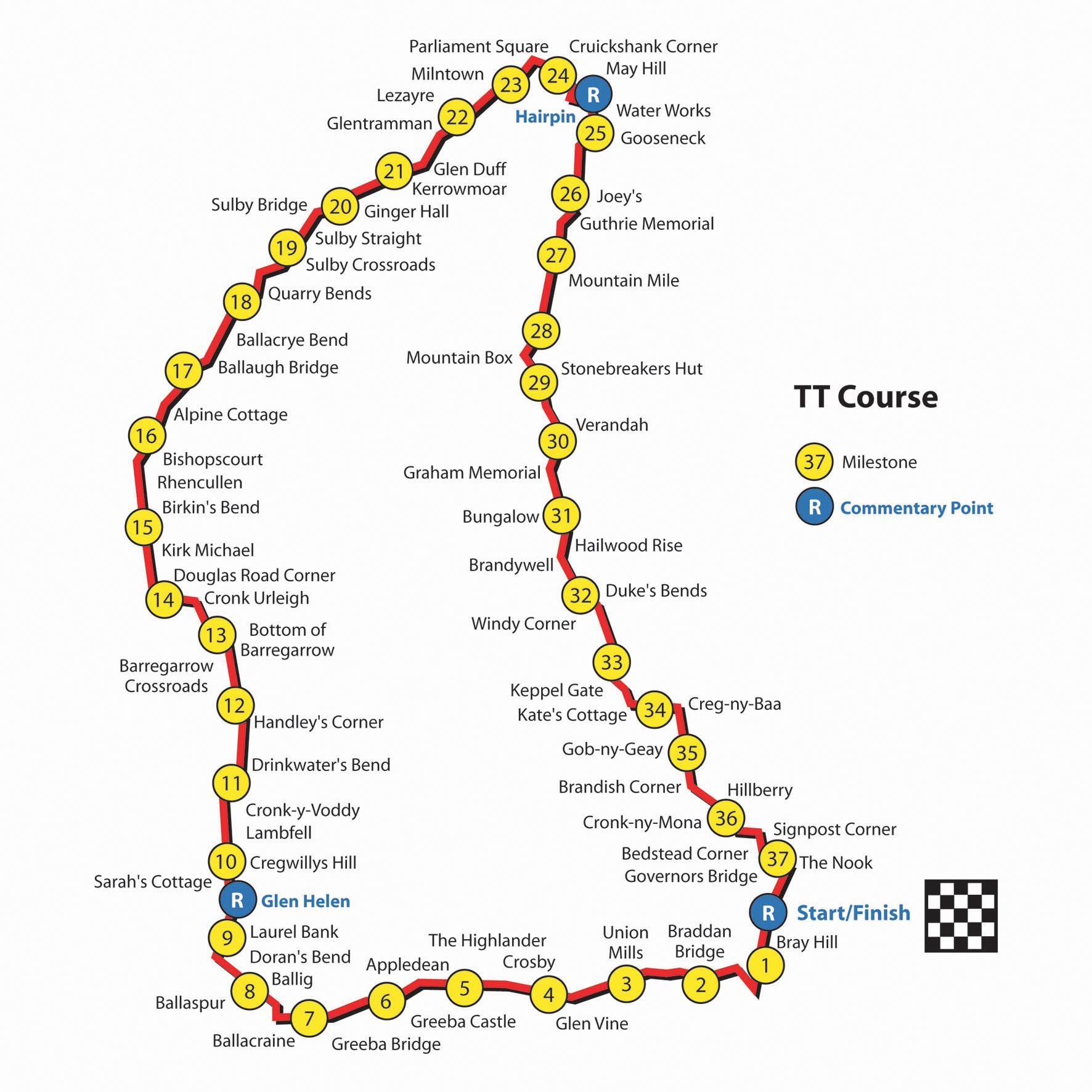 The Isle of Man TT draws a huge number of motorcycle racers, pro, and amateur, from around the world to test themselves against the undulating course of typical British public roads that are for the most part bordered by thick stone walls. The outright lap record of 16:42.778 was set in 2018 by Peter Hickman riding a BMW S1000RR with an average lap speed of an amazing 218 kph! Even the ‘slowest’ class record is nothing to sneeze at – Chris Palmer rocketed his Honda RS125 around the course in 20:27.87/178kph. Something to keep in mind as you work at your own personal bests!

For this special event, we will be using the impressive track mod created by Jim Pearson in 2019 for GPL and then converted in 2020 to rFactor2 by S. Victor (Xiang) with assistance from Corti (Andres). The GPL mod was a 14-year effort by Patterson, with several personal trips over those years to walk a substantial portion of the circuit as well as taking pictures and videos to guide his work. In his notes on Steam, he gives great credit to the team of Xiang and Corti for their work in skillfully managing the conversion to rF2 that faithfully replicates both the visual and driving experience that he achieved in the original. Download the track here on Steam. 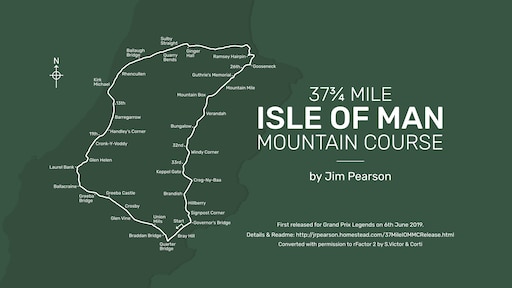 Jim Pearson took the time to write about the track and completing a circuit – the notes have some great information and provide newbie rally circuit drivers some hints on how to approach learning and mastering the course.

Well worth a read for anyone; it can be found at http://jrpearson.homestead.com/37MileIOMMCRelease.html. Click the “READ ME and Driving Guide PDF and Options Manager PDF” to download the zip file.

Since the traditional RL use of the track is motorcycles (although the first races were exclusively motorcars), the choice of modern cars for our event has fallen to the World Rally Car class.

The WRC mod we will be using is the WRC14 originally built for rFactor and then converted for rFactor 2 and shared by Corti that features the Citroen DS3, Ford Fiesta, Mini WRC, Subaru Impreza N12 and WRC variants, as well as the Peugeot 307.

Thanks to CMS member George Angelidis, we have a special event version of the mod, with each vehicle available in a WRC and WRC 2 variant, each tuned to class standards.

For this competition, all the WRC variants are AWD however across the WRC2 class, there are both FWD and RWD cars from which to choose. They all feature 1.6L direct-injection turbocharged engines that generate about 380 bhp (280kw) of power and have substantial upgrades and weight reduction measures to improve their racing performance. 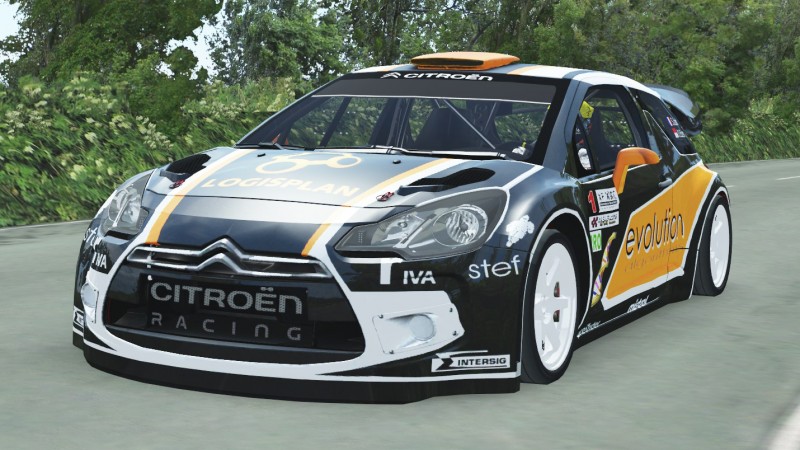 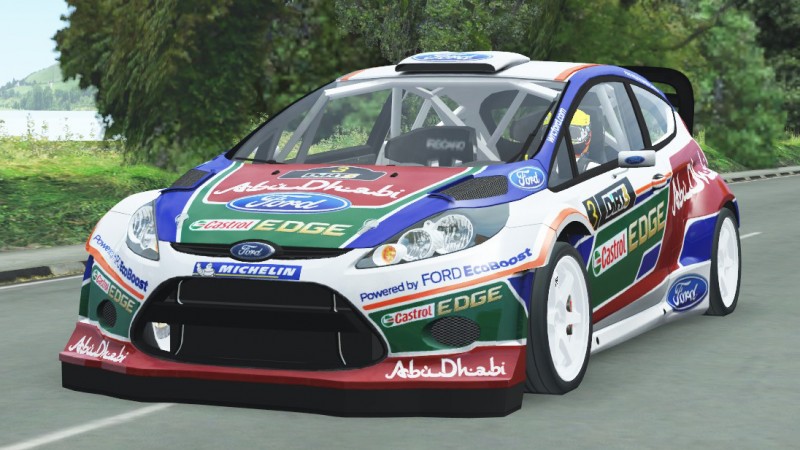 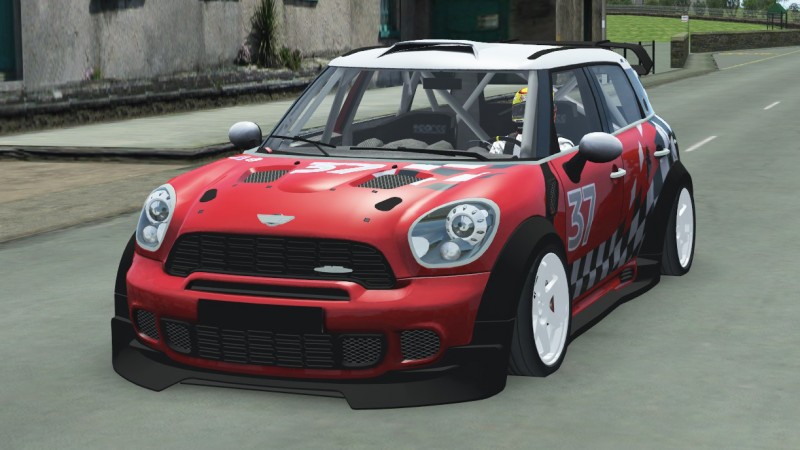 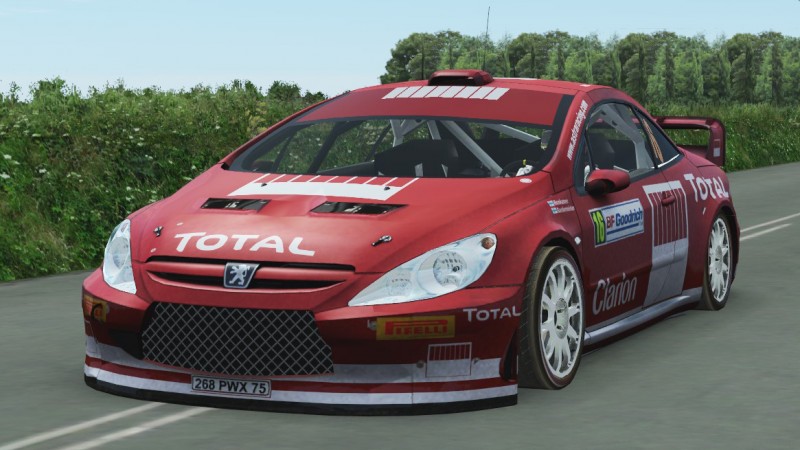 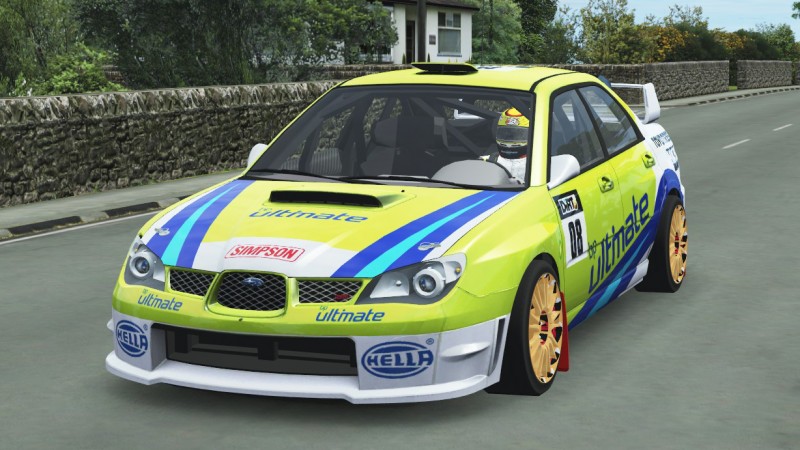 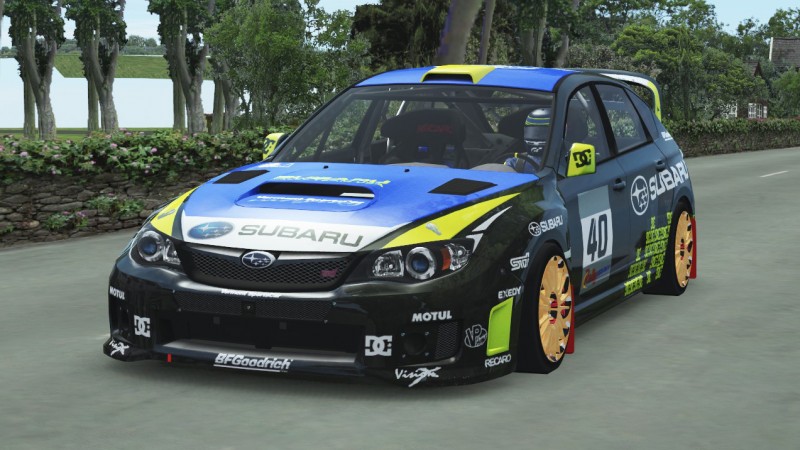 Details on where to find the mod is below.

We will be simulating the weather typically seen on the Isle of Man when the RL TT is held. Late May and early June could be expected to be warm and sunny, but not so much for Manx weather. With average sunshine of a mere 7 hours and temperatures 8-16C/46-61F, conditions can be a bit blustery with winds largely from the south at about 20kph/12mph, mostly overcast and with a constant eye towards rain.

The special event will use fixed weather to replicate these conditions.

This will be a time trial event, with no limit on the number of laps that may be driven, either in one stint or overall.

As such, occasions of more than one car on a section of the course at one time should be relatively rare, however, drivers are advised to ensure that they are paying close attention to gaps with other cars, particularly as they start from the pit area and again on approaching the pit area as they complete a lap.

Racing will be in three classes:

Seniors are participants aged 55 or older at the start of the event. There will be a separate sign up required for those participants who wish to compete in this class. See the details below.

The race server name will be “CMS Isle of Man TT”

In order to compete in this special event, you must first download the WRC mod rfcmp file available on a pinned post at the CMS Discord NARS #special-event channel as well as having the Isle of Man circuit from Steam. If you have the base WRC14 mod already installed, you must uninstall it before installing the CMS mod.

With the exception of the Seniors Class, there is no requirement to register. Just show up, drive, and have fun!

Those participants wishing to compete in the Seniors Class MUST indicate this PRIOR to registering a timed lap on the server. Registration is completed by posting a message on the CMS Discord NARS #special-events channel indicating your name, age, and that you wish to race in the Senior Class.

Timings will be recorded on the CMS LiveRacers site and will be the authoritative source for determining winning times in each class. Simresults.net will be used to verify driver aids used.

Monitoring of the CMS Discord rFactor 2 voice channel is highly recommended when on the race server. Voice and text chat should be minimized to that which may be required to manage traffic around the general area of the pits and start/finish or to advise of issues on track.

CMS General Competition Rules are in effect for this Special Event. All Drivers are reminded to check the GCR for the proper method of submitting an Incident Review Request should the situation require.

In the (hopefully) unlikely scenario that a driver is involved in an incident and is subsequently found to be at fault by an IRR committee decision, given the unusual nature of this event, the minimum penalty assigned shall be the removal of their fastest lap time at the time the decision is made.

Drivers are therefore cautioned to be extremely cautious should they find themselves racing in close proximity to other competitors especially approaching or exiting the pit area.

rFactor 2 system delegated penalties must be served as there will not be live admins for the event.

While the tuning options will be locked for the two vehicle classes, setups will be open and we encourage everyone to share!

Drivers are strongly advised to reboot their computer before joining the race server.

Don’t use a WiFi connection. Only Ethernet cable connections are permitted for CMS racing events.

With the generous support of CMS, Steam gift certificates will be awarded to our competitors as follows:

Winners will be announced on the CMS NARS #special-events channel on January 3, 2021, after the close of the competition.

Good luck everyone – and HAVE FUN! 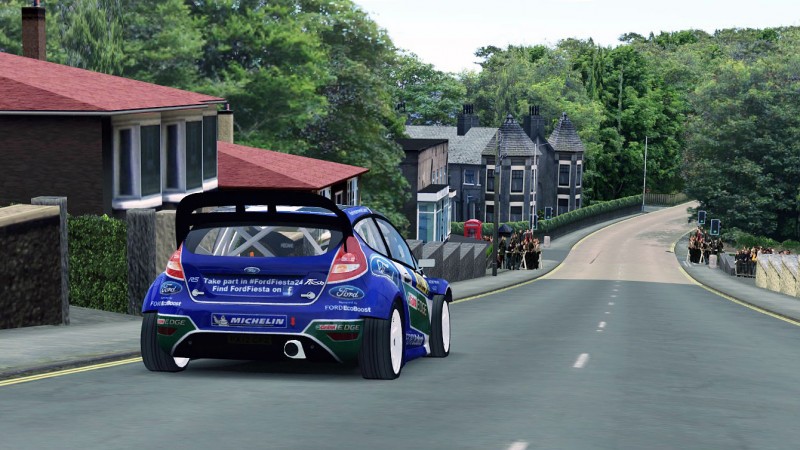