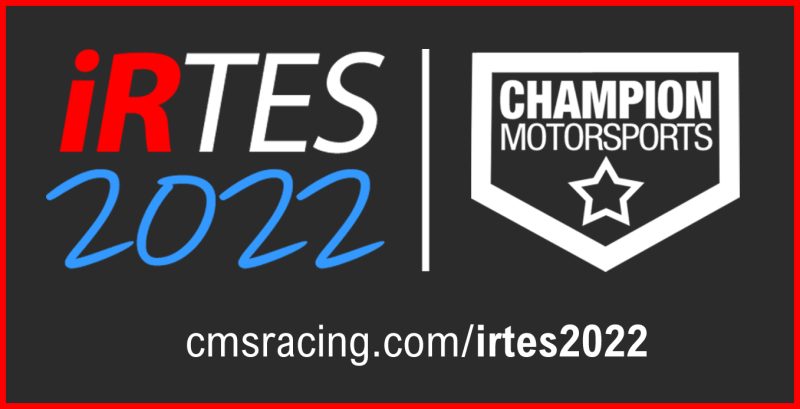 As with the 2021 iRTES, the format for this 2-3 driver team endurance series will be loosely based on the World Endurance Championship (WEC) structure. The series will offer podium trophies and multiple prize opportunities for competitors.

In addition to the iRTES, there will be a support series, the iRTES CMS Cup that runs just prior to each iRTES Endurance round. Details are still being determined, but the following information has been decided:

There are 2 ways to pay.

Your team will need to make the entry payment no later than December 30th, 2021.

The iRTES CMS Cup Series does not have an entry fee. All CMS members are welcome to join this support series to the iRTES Endurance Series.

The series will use the following iRacing cars:

Note: Some of the GT3 cars listed may be excluded. A final listing of GT3 cars to follow.

For the four 3-hour races:

All test races and event races follow the same schedule:

For the 4-hour and 6-hour races, exact times to be announced, but the goal will be to finish around the same time as the 3 hour events.

The start of any race and the first lap is the most likely time for incidents to occur. To control avoidable contacts, first corner pile-ups, or aggressive driving habits, there will be a designated “Orange Zone” (OZ), inside which drivers are expected to be more cautious, to avoid high-consequence incidents and the potential for ending someone’s race. The OZ will change from track to track and will be announced in the CMS Discord “Sundays – iRacing Team Series” category.

A safety car will be used at the race admins’ discretion when warranted.

1) Information will be dispersed primarily on the CMS Discord server in the CMS Team Endurance Series category.

2) While on the race server, voice comms will be exclusive to the iRacing radio function. No race comms during the event will be transmitted on Discord.

3) Immediately following the race, the podiums for LMP2 and GT should join the Discord channel #winner-interviews located on the CMS Discord server in the CMS Team Endurance Series category for their winner’s interviews by the broadcasting team.

4) Set your microphone to “push to talk”. If that just doesn’t work for you, PLEASE set the voice-activated audio level up considerably so your coughing, wheezing or sim controller grinding isn’t “shared” with everyone else.

5) Abusive and/or profane in-game chat may lead to that team receiving probation, suspension, or ban from the league.

6) Do not “call out” or argue with a competitor or race control. If you persist after being warned, the team microphones will be disabled in iRacing during the event.

7) Teams are encouraged to use their team radio within iRacing.

8) A penalty applied by iRacing AI in avoiding a crash is eligible for review by race control.

To have race control review for an errant penalty, the driver of the team car should call out to race control:

After review, the driver will see on their screen that the penalty has been removed.

1) Penalties will be applied by the in-race iRacing AI function.

2) A race controller will be present during each event, but will not intervene during an event except:

3) All penalties must be served and cleared by the iRacing AI. Remember race control does not see penalties from iRacing AI, so if a driver asks, “why did I get a penalty?” race control will not be able to advise, only that a penalty was issued.

4) Make sure you read iRacing’s FIRST Sporting Code section on how penalties are applied and how to clear penalties.

5) CMS Gentlemen’s Rule – Should you turn-around or damage another driver by your error, consider pulling off track in a safe location and waiting for the other driver to proceed in the race.” This is an elective decision, but penalties will be significantly reduced if adhered to.

Teams are expected to have their drivers available on race day, but if an emergency happens and only one driver can attend, they are welcome to run the event but they may be DQ’ed before the end of the event so their status is properly displayed on the broadcast results at the end of the race.

There will be two championships for teams. One each in LMP2 and GT classes. Points will be scored in each class separately. At the end of the 5-race series, CMS will crown both LMP2 and GTE podiums!

Each class will use the following for team championship points.