November 4th, 2020 – The midway point of the season has arrived and a trip down south to the Australian continent precedes as the GT4/GTE series head to the famous circuit of Phillip Island.

With both championship leaders pulling a steady lead in their respective championships, would the challenging circuit enable a new order? It certainly looks so.

Qualifying pole in the GTE class would be taken by Jason Lundy with a 1:24.647 by a margin of .128 of a second to second place. Alongside him would start Richard Hibbs. Championship leader Justin Hess starting 4th, would this be the break needed to tighten up the championship in either’s favor?
Qualifying pole in the GT4 class would be taken Drew Lidkea with a time of 1:37.459 which would be .096 of a second clear to second place. Brett Stephens would line up second, championship leader Kurt Polter in third.

The race start would be mostly clean for the GTE class with contact being made in turn 2 between Christopher and Douglas putting both drivers off into the gravel but able to continue. The battle for the lead within GTE would certainly start to heat up with Justin Hess moving from 4th to 2nd on the opening lap. It was an unfortunate start for Jason Lundy who would now find himself in 3rd from 1st. However, this was far from being decided as the leaders soon closed the gap as all three be within half a second of the other for several laps to come. Unfortunately, on lap 5 race leader Richard Hibbs would make a mistake and spin. 2nd place driver Justin Hess would also go off in avoidance of Richard giving the lead to Jason Lundy. The odds certainly look like they had turned in Jason’s favor.

The gap to the leader had grown but with tricky conditions on the track as the drivers attempted to balance their cars for the circuit no one was safe and only a single error separated success and failure. Many drivers would find themselves making errors under these tricky conditions. Jason Lundy was comfortably ahead of Mario Teixeira and Justin Hess and was expanding the gap when an error was made a quarter of the way through the race giving the lead to Justin Hess and allowing Mario Teixeira past. Jason would quickly find himself back in 2nd and would work the gap down to just under two seconds throughout the race. The order of 1 and 2 would not change again in this race.

Richard Hibbs would find himself managing a damaged car and would put up a valiant effort to maintain third against his pursuer Douglas Hintze with the position changing several times throughout the race. The gap between these two would finish was just under 2 seconds apart.

The GT4 race would begin with a clean start. Drew Lidkea would be able to maintain his lead into turn 1 and Kurt Polter was able to make up one place putting him into 2nd in the first corner. However, Drew appeared to have put on too much downforce which gave Kurt a clean run into turn 4 to make the overtake. The leaders of GT4 would be consistent within a second until the pit stop cycle near the end of the race. Drew lost a lot of time within the pitstop cycle ending what had been a very close race between P1 and P2 for the last half hour.

With this being the halfway point of the season, the championships appear to be comfortably heading towards their respective leaders. Given the challenging series of tracks coming up, one can only be too cautious however as one mistake from either leader will make or break their respective challenge for their driver’s championship.

The season will continue next at Oulton Park Circuit on November 18th. 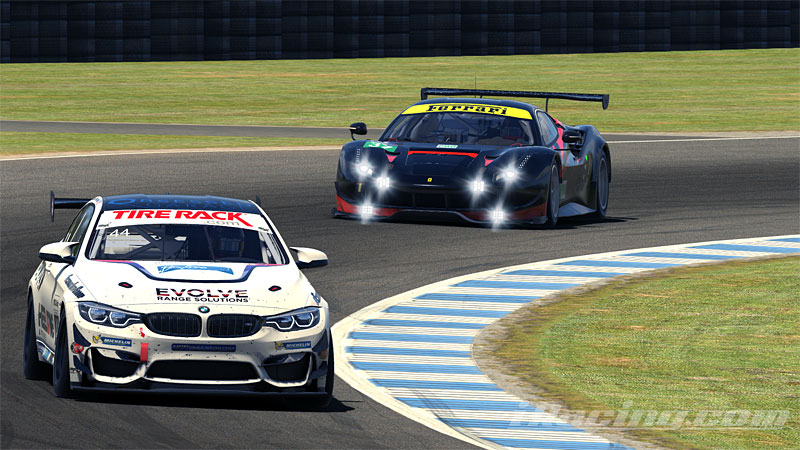