November 18th, 2020 – The third to last round of the GTE/GT4 season has arrived and the series sees a trip to the United Kingdom’s tight and challenging Oulton Park Circuit.

After last week’s race cementing current championship leaders’ advantages, time is running out for other championship contenders to upset the current order and overhaul themselves to a higher position. But, with Oulton Park’s tight and challenging layout in combination with the series running GTE and GT4 cars together, one mistake, misjudgment, or an unfortunate turn of luck can be race ending.

Qualifying pole in the GTE class would be taken by championship leader Justin Hess with an impressive time of 1:23.901 which was .669 of a second faster than second place’s Jason Lundy with a time of 1:24.570. These two cars were certainly in a class of their own in qualifying as the rest of the field found themselves much closer to one another.

Qualifying pole in the GT4 class would be taken by championship leader Kurt Polter with a superb lap of 1:36.746. Kurt Polter’s lap was 1.467 seconds clear of second place’s John-Taylor Tami. Kurt’s car was certainly in a class of its own with the rest of the GT4 field being quite close to one another.

The start of the race would be very clean and respectful between the drivers of all classes. The leaders, being surprised by an early green flag, would make poorer starts than normal. Jason Lundy was able to capitalize on this with a quicker reaction than polesitter Justin Hess and take the lead into turn one. The order would stay the same throughout most of the field on lap one. One GTE car, driven by David Slee, would go off within the opening lap and eventually retire a few laps later.

At the end of the opening lap, an unusual complaint was picked up on the radio by Justin Hess, who was closely following Jason Lundy at the time, saying that he “has beeps when he is supposed to shift that are too loud”… We are unsure if this was a car setup issue or who was responsible for this error, but it did not seem to affect him too much, as on lap 4 Justin Hess would overtake Jason Lundy for the lead and this would be the order they crossed the finish line in.

However, the battle for 3rd and back would not be settled so easily as a fierce battle was being fought for the final podium position and back. Leif Peterson was in hot pursuit of Richard Hibbs for most of the race until an error by Richard cost himself the position. On lap 28, the tight Oulton Park circuit would prove how unforgiving it was. A mistake from Mike Tyler would cause a series of events that would ultimately see the GT4 championship leader Kurt Polter and GTE championship runner up Richard Hibbs taken out of the race. 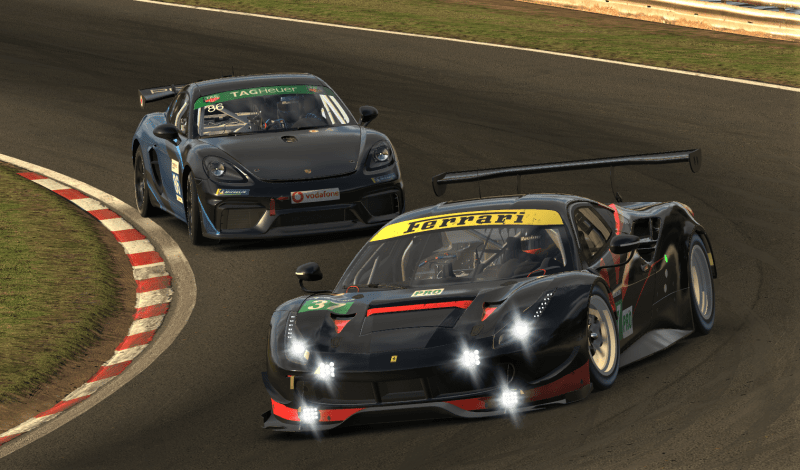 Kurt Polter, after making a clean opening lap, started to consistently open the gap to second place. One would think he had this race in the bag. Though Kurt had checked out, the battle from P2 onwards continued.

On lap 11 Brett Stephens would make his most important overtake of the race. Brett Stephens overtook John-Taylor Tami for second. Drew Lidkea, who had worked his way up to 4th, would unfortunately make yet another mistake and find himself last of the current runners on the lead lap again. Drew Lidkea would still manage to get 2nd place after climbing his way back up the order.

On lap 25 for the GT4 cars, Kurt Polter would find himself caught up in the most unfortunate crash within this series in regards to the championship order. As he and Richard Hibbs would have to retire from the race soon after. This crash would be terminal for Kurt Polter due to a black flag caught soon afterward within the pitlane as he was pitting for repairs and would give the lead, and eventually the win, to Brett Stephens which would be his first of the season.

It will be vital for Kurt Polter to make no mistakes going forward as the disqualification via black flag in the pitlane during this race has cost him a significant amount of points in comparison to his fellow competitors. As it stands, the advantage and ultimately the championship is still Kurt’s to lose.

With two races to go in the GTE/GT4 series and a potential championship decider in Suzuka, drivers must be careful to not make any mistakes as there will not be enough races remaining to make up for them going forward. With the exception of the championship leaders who are not yet out of the grasp of other drivers, the battles for the rest of the championship are very close and will absolutely be decided by the performances played out on track over the final two races.

The next race in this series will be December 2nd on the first Wednesday of the month. Suzuka will be our next venue and it looks like it will be setting up for a very close race within the GTE class as the balance of power shifts due to the track characteristics and will likely resemble the previous Phillip Island race which found the drivers exceptionally close on pace. The GT4 cars will be close in performance as always. We hope to see you there as we reach the final stretch of this season.