April 29, 2020 – As the GTE/GT4 Cup Series hits halfway on the season schedule, the field would regroup at Mid-Ohio Sports Car Course for this week’s battleground. The tight, twisty confines of this circuit would create few passing opportunities between drivers, and between classes. With the sun setting low on the front stretch, the fight would last until the end of the 1-hour race time.

Qualifying in the GTE class would see Humberto Roca taking the front spot by two-tenths, while in GT4 Kurt Polter took the pole position in class by less than half a second. The start was clean through the first few turns, but it didn’t take long before spots started changing hands.

In the GT4 class, Polter would take off with Justin Hess right behind, and the two would stay close for many laps running 1-2 the majority of the race. In third place, JT Tami would battle with Brett Stephens, with Stephens eventually pulling away. With a handful of laps to go, Stephens would pass Hess for second place but in front, it was Polter for the win. Hess would finish third, taking yet another podium this season, and Stephens finished second in his first race in the series.

As for the GTE class, the front runners would run into trouble on cold tires early on, and Dion Smith would take the lead on Lap 4 with Miguel Antonio Alcrudo in second and Drew Lidkea in third. By Lap 7 Alcrudo would take the front spot from Smith, and Roca would battle with Smith for second for several laps until Lap 15 when Roca held the spot. On lap 33, Roca would move into first place as Alcrudo pitted, then the following lap would himself pit and give it back with a 20-second deficit to the lead. As the laps wound down, Roca would put on a charge but it would not be enough. Alcrudo gets his first GTE win of the season, with Roca finishing in second and last week’s winner Lidkea rounding out the podium.

After 4 races, the Drivers Championships are close in both classes. In GTE, Drew Lidkea sits in first place with Dion Smith only 3 points back in second, and Humberto Roca in third, Matthew Overton in fourth and Peter Hebron in fifth.

In the GT4 class it’s Kurt Polter atop the standings with a 26-point lead over JT Tami in second place. In third is David Anderson, with Justin Hess in fourth and Jason Lundy in fifth.

There will be a dropped race result in the final standings, so there’s still a lot to work out by the end of the season!

The next race for this series will be on May 13th at Road Atlanta in our second Endurance length event of the season. With 75 minutes to battle, and tire strategy in play, it should be quite the race! 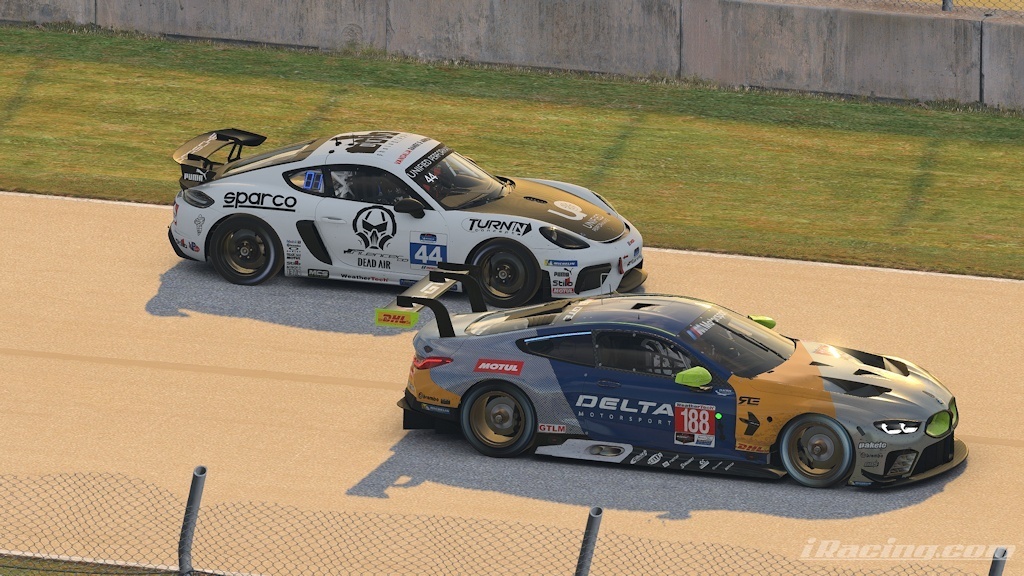