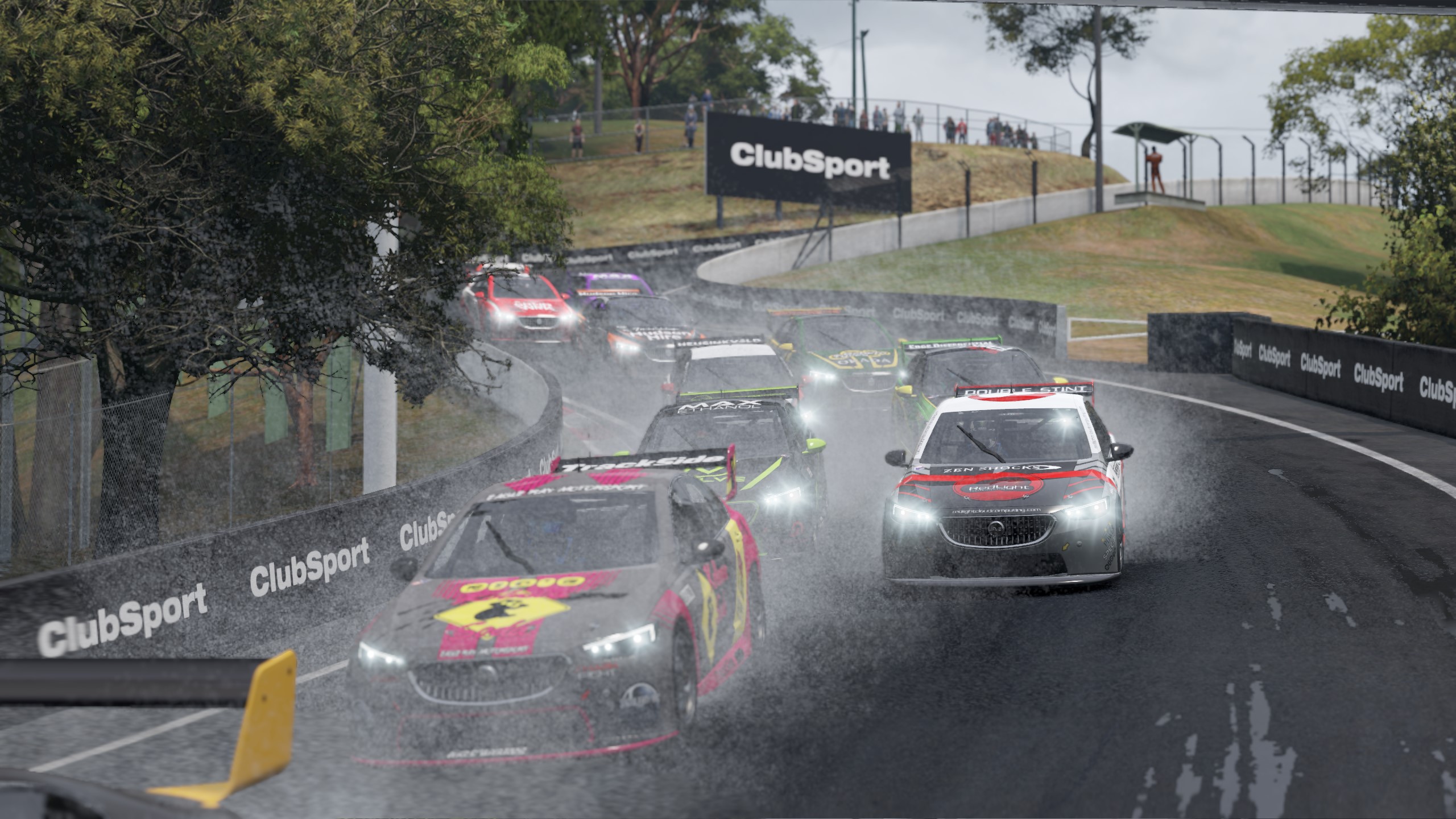 The V8 Supercars are absolute monsters with 640HP and a very (very!) responsive rear-wheel-drive powertrain that packs a lot of torque, so surgical throttle inputs are a must! Those adrenaline-packed machines will certainly provide some very good racing, with exciting and fun battles.

In the best V8 supercars spirit, we will be running on classic Aussie circuits (Bathurst and Adelaide), plus three more venues to be voted by the general public. Be creative, anything goes. Think about the most fun places to tame those beasts while battling for the podium.

To spice things up and create some variation on pitstop strategies we will be running with accelerated fuel usage (2x) and full damage simulation. No number of pitstops are required, so plan up at your own discretion.

What an intense race it was! Between the colossal amount of rain and the inherent difficulty of the V8 Supercars, plus the technical corners that Suzuka offers, this was a very tough race, where participants had to stay laser-focused the entire time to avoid the wall.

Congrats to @Jon Uyan, FrostyRacoon, and @Sahil Mustac for the 1st, 2nd and 3rd places. The test race went smoothly and we are ready to start the Automobilista 2 season.

We had an exciting round in the streets of Adelaide, with a couple of accidents and spins due to the combination of challenging corners and tall curbs. Congrats to @Sahil Mustac for the 1st place, @Jon Uyan for the 2nd, and @Guilherme Bencke for the 3rd.

The second round of the CMS V8 Supercars Fun Series was a thrilling ride, with plenty of battles at the very technical VIR circuit. Weather was good and dry, even if the overcast skies of Virginia suggested otherwise. Congratulations to @Jon Uyan for the 1st place, Brette Brooks for the 2nd, and Guilherme Bencke for the 3rd.

It poured down during the Kyalami race, which brought an interesting challenge to the racers that were brave enough to face the terrible weather conditions. Several accidents were caused by the very wet track surface, except for the phenomenal performance of Brette Brooks, which made a very consistent race regardless of the challenging conditions.

Congratulations to Brette Brooks for the 1st place, Guilherme Bencke for the 2nd, and Jon Uyan for 3rd.

In two weeks we will go to our final round in the series, the 60-minutes of Bathurst. For that race, we will be driving in clear weather conditions.

The V8 Supercars Fun Series had its closing night in great style on the hills of Bathurst. Competitors battled among themselves, the cars and the very technical track for 60 minutes of fast-paced action at the Mount Panorama circuit.

A very nice qualifying run from the series rookie @Milan Plachy, granting the pole in his first appearance in the AMS 2 V8 Supercars League. Jumping into the race, @Marketcrash16 (Tom ) had a flawless run, which resulted in a well-deserved 1st place, followed by @Colin Moore in 2nd and @Milan Plachy in 3rd.

As the series comes to an end, congratulations to @Guilherme Bencke for the championship with 60 points, followed closely by @Jon Uyan with 59 and @Brette Brooks with 44.

Congratulations to all drivers that took part in this series, and thanks to everyone that joined and is helping us learn and explore this brand new sim that has a lot of potential. We will continue running full-fledged AMS 2 series, as well as one-off events here at CMS, so stay tuned in this channel and in the #automobilista2 channel for news on our upcoming events.