August 24, 2021 – A staple of any iRacer’s repertoire for good reason, Lime Rock Park is the first experience many people have with the platform. Lime Rock Park was built in 1956, right behind Road America and Willow Springs, in 1955 and 1953, respectively, making it the third-oldest racing venue in continuous operation in the United States. It’s particularly well known as the home of the Skip Barber Racing School. In the smaller Formula Vees, much of the circuit is flat out, and the slipstream is particularly effective down the long straight, so expect some very close racing here. 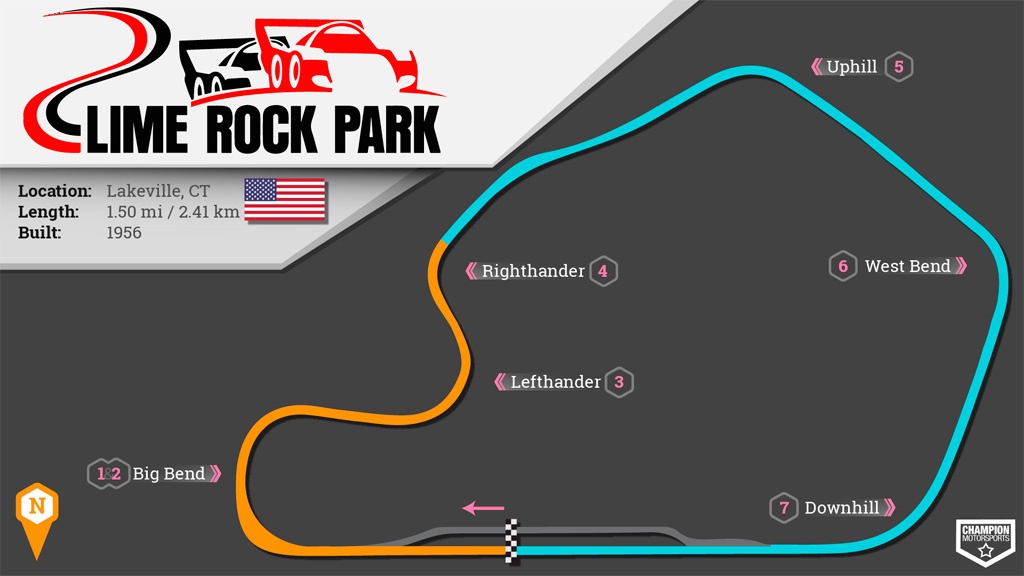 Despite only having two laps to work with, qualification results were spread by just 0.667 seconds! Evan Concepcion took pole with a time of 1:01.25, with Pierre Robitaille beside him on the front row with a 1:01.28. Here is the starting grid:

When the lights went green, Quintero got a slightly better start and was able to catch the slipstream of Concepcion to get alongside Robitaille up the inside into Big Bend. As the two went side by side through turn 1, Robitaille eased off to fight another day. Starting right at the back of the pack in P10, Kris Hudson was already making moves up the order, passing Thompson, Slee, and Collier into P7 by the end of the first lap.

At the front, it was Concepcion, Quintero, and Robitaille, all looking very eager to lead some laps. But in Big Bend, Concepcion went a little too deep while trying to defend around the outside, and spun! Robitaille had a pucker moment as he narrowly avoided the spinning car, while an opportunistic John-Taylor Tami snuck up the inside into P2. And we have twenty-eight more laps of this! 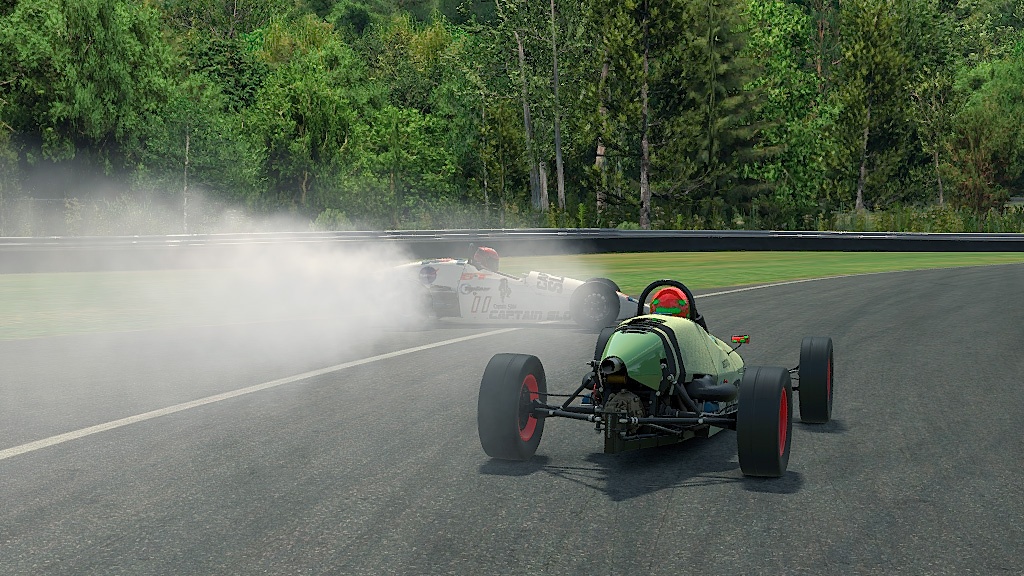 The draft proved very strong, making it easy to stay very close and pass down the Sam Posey Straight. Some drivers were already taking defensive lines, very early in the race, while others worked together, to try to improve their overall track position.

Into Big Bend again on lap 3, Zachary Wood, who started P7, has made his way to P4, and continues his charge, taking it three-wide with Quintero and Tami to squeeze by into the lead! Meanwhile, Collier, Hudson, and David James have been in a fight for P6 as they cross the line with not a tenth between them. Collier and Hudson are able to get through on the inside into Big Bend, but it’s far from over. Thompson even has a peek after the Uphill but thinks better of trying to chuck it up the inside of West Bend. The cars spread out, and Hudson drives away.

After another few laps of close racing and lead changes, the leaders again take it three-wide into Big Bend, but Wood and Quintero get a little too close, and collide in turn 1, catching Tami in the process. Quintero is able to get away, but Tami is forced to take the scenic route, while Wood helplessly waits for most of the field to pass, ninety degrees to the track. 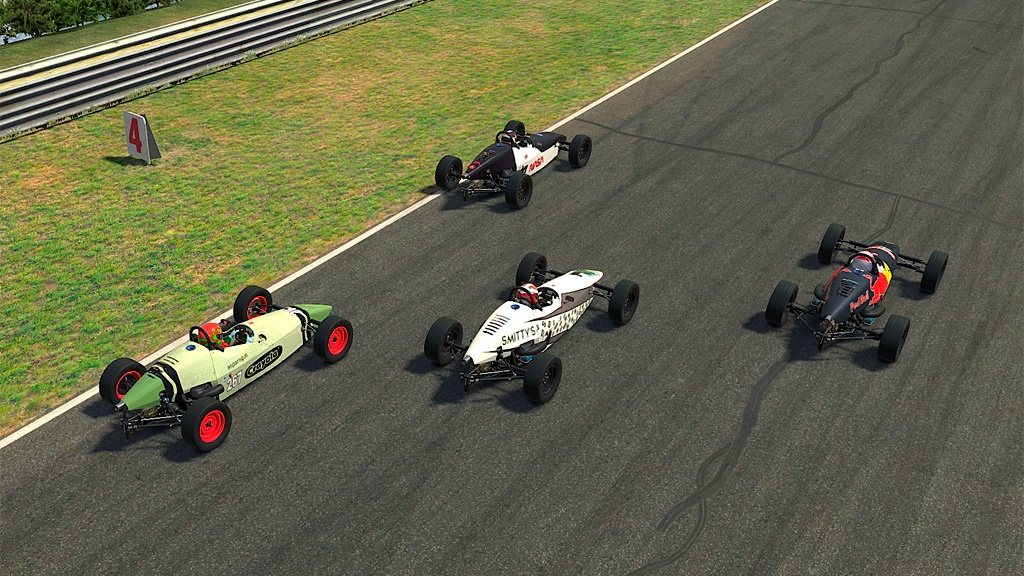 Just a couple of laps later on lap 7, Robitaille, who is now on his own in P2, just slightly overcooks it into turn 1 and dips a tire into the grass, causing a spin which costs him a painful eight positions. Quintero is now well out in front, out of slipstream range of Hudson and Collier, who had been working together to get up to P2 and P3. Meanwhile, Concepcion, Tami, and Wood are battling it out a few seconds behind.

These two groups would stay in tight formation, going three-wide and shuffling the order every so often after catching the draft down the straight, with Thompson, Slee, and Robitaille bringing up the very spacious rear.

By lap 15, Concepcion has already been defending hard for several laps, trying to prevent the easy overtake on the straight. Success is limited, though, as the draft is very powerful in the Vee. Wood tries to follow his defensive line, but in the jostling that ensues, they make wheel-to-wheel contact at 100 mph, but manage to keep the shiny side up just long enough to make contact again two turns later. This one, though, would see Wood getting acquainted with the tire barrier. Concepcion and Wood would both head for the pits to repair, leaving Tami free to set some fast laps.

With clear air, Robitaille has been slowly reeling in Thompson. By lap 18, he’s in slipstream range, and whatever gap remained instantly evaporates. The battle is on. Realizing Robitaille is a bit quicker, Thompson lets him by on the next lap, in the hopes of working together to catch up to Tami and maybe pick up more positions. This plan backfired, as Thompson made a couple of minor mistakes allowing Robitaille to escape slipstream range, so Thompson had to push if he was going to catch back up. 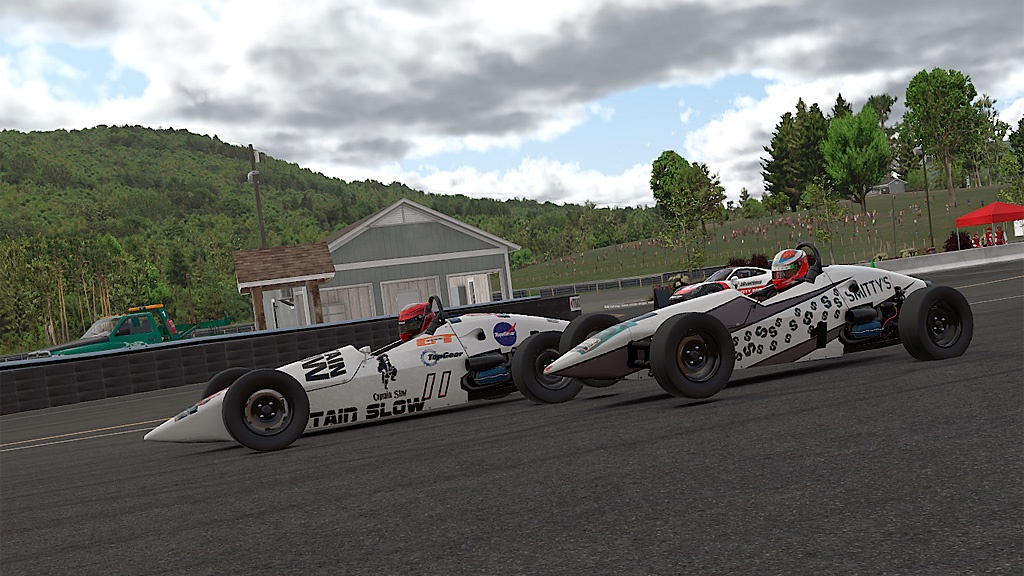 Meanwhile, Quintero seemed untouchable in P1 for much of the race, but that lead was finally starting to crumble! By lap 27, Hudson was well within draft range and wasn’t going to lift for anything.

Quintero went defensive coming into Big Bend, Hudson hung it around the outside, but couldn’t make it stick. Collier was right on top of them, no doubt hoping to slip by while P1 and P2 were fighting for position. James was only a few car lengths back. The fight for the lead was still wide open.

Lap 29, Hudson, Quintero, Collier, and James took it four wide across the line and into Big Bend. Normally I’d be contacting next of kin at this point, but these drivers know how to race close and keep it clean! Mostly by chance, they ended up back in their original order.

Last lap (lap 30), Collier weaves in and out between P1 and P2 and snags the lead, but only for a moment, as he’s overcooked it into the grass at Big Bend!

Back a few spots, Thompson’s pace has improved, and he turned a personal best 1:00.961 on lap 29, which would be enough to loom large in Robitaille’s mirrors, but Thompson would ultimately stay behind by just a quarter of a second at the line. 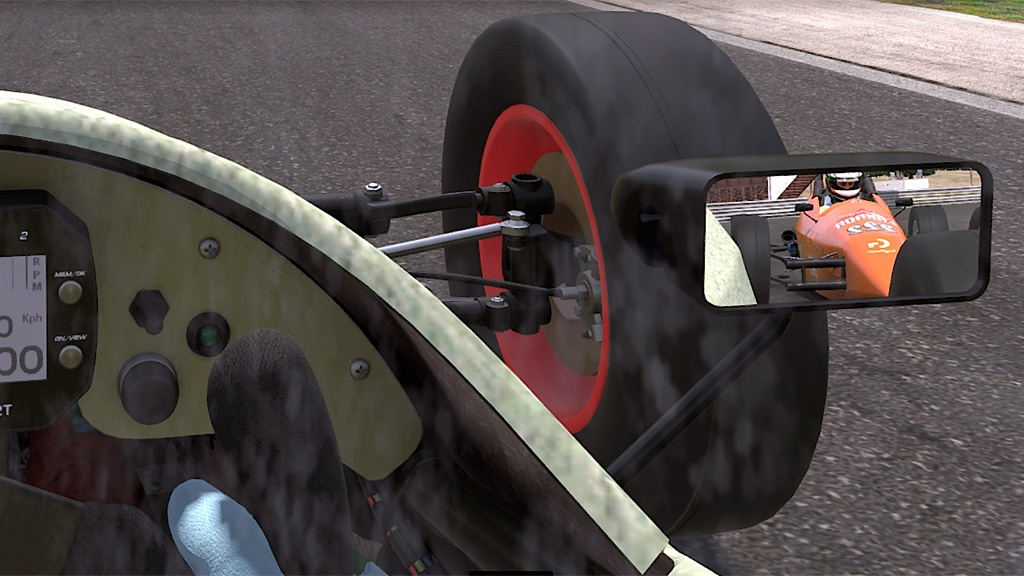 And the battle for the lead would be decided with an all-out drag race to the line, with Hudson crossing the line by a nose cone, a difference of only 0.031 seconds over Quintero. Talk about a photo finish!

Behind Hudson and Quintero, James would take the other side of the podium in P3. Congratulations!

What a race. Thanks for reading, and thanks for racing.

Our next Tuesday race will be at Tsukuba on September 7th. These races are fixed setup, and we have practices on the nights prior, so come on out and give it a try! The Vee is a blast to drive.