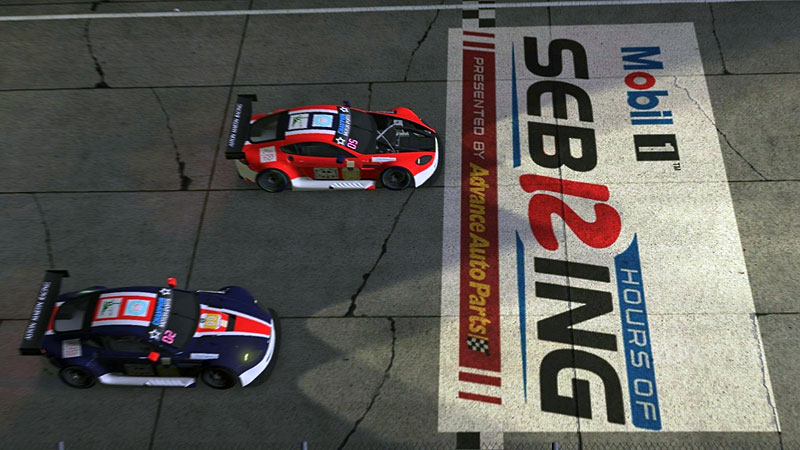 Crossing the line at Sebring.

Rain HAS ARRIVED! For the first time in the season, we got some rain for VWSC 1.2 Hrs of Sebring, producing some nail-biting racing and a share of randomness due to on the fly strategies…

The race was showing early on to be anything but usual with having a shower 5 minutes before qualifying. People that got on track first got the most out of it since, for most, the first lap was their best. Jason Whited and Cameron Sansano were the beneficiaries of this “early lap” as they grabbed the respective class poles.

For LMP2 it was mostly a battle between Ernest Dela Cruz, Jason Whited, and Colin Moore. While the race started under dry conditions there was a shower halfway through that made the pit walls thinking.

Whited opted for Interns while Moore and Dela Cruz stayed on slicks. From there, Dela Cruz caught a fuel-saving Whited, who ironically, run out of fuel coming off the last corner taking the chequered flag coasting 9 secs behind Dela Cruz. Colin Moore would finish a solid 3rd placing him in a very good position to win the Championship.

Further down, Wouter de Bruijn had a solid drive recovering from a Drive-Thru penalty to get 4th place while Cosimo Streppone had a spin at Sunset bend and getting hit by a GTE-Am car and Carlos Pons facing problems. However, Streppone’s drive was enough to secure Bykolles Racing’s LMP2 Teams Championship! 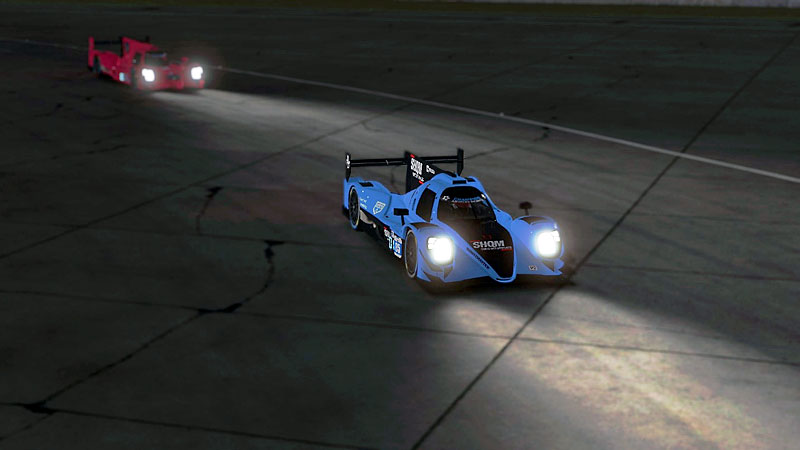 Jason Whited using up the last drops of fuel in Sunset Bend. About 500 feet short,

That brings us to LMPC, the class that nobody wants to win… Difficulties suffered by Ajay Ren and Bob Roberson throughout the race, left it all to chance about who is going to win the race with Ren ultimately prevailing to take his first-class win, though not without drama.

However, with an absent Tom Mountjoy and a 2nd place finish that meant that it was all needed for Bob Roberson to win mathematically the Championship in LMPC; doing so he becomes the oldest CMS class champion (and to my knowledge even by real-world standards) at the age of 82!  What dedication to this terrific achievement!

In GTE classes non-stop drama of bad strategies and gambling on the weather caused havoc among competitors that the actual results weren’t even confirmed until post-race inspection.

In the Pro category, it was a gamble on tires at the beginning with George Angelidis and James Foster being the only two drivers on wets. That was proved disastrous as the track dried very quickly and they both had to abandon their strategy and coming in for slicks on the 4th and 2nd lap respectively.

An overjealous Yassin Marzoug attempted an overtake on Jon Uyan early on but ended up hitting the wall from the aero wash at the sunset bend exit ruining his race. The pairs of Cameron Sansano/Marouane el Idrissi and Jon Uyan and Jerry Chen maintained a close and fiercely fought battle throughout the race with mostly all deciding to brave it out and remain on slicks for the entire race even after the halfway shower.

In the last stint, Sansano had contact with some of the GTE-Am cars and el Idrissi drove off but ending up short on fuel pitting for a splash and dash. A miscommunication in the Pits meant he had to go another round to finally getting serviced losing the win to Sansano.

A post-race inspection found Sansano’s car using an ABS module, which is forbidden in the Pro cars. Under this ruleset that meant that Sansano was given a 2-place grid penalty and now moves to 3rd behind el Idrissi and Uyan. That means that Marouane el Idrissi is scoring his first win of the season and manages to collect a good amount of points to have a last shot at the Championship in Bahrain. 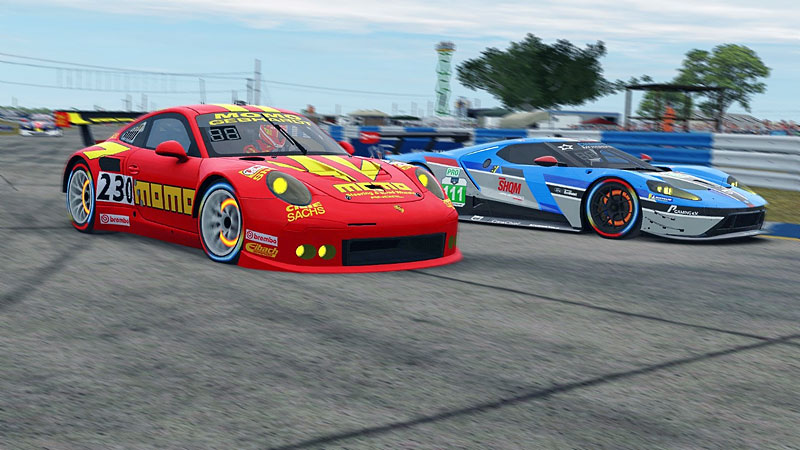 Another win for Imad el Idrissi was in the Am class with the lightning pace of “maestro” Matt Buice securing him 2nd. Vinicius Goncalves gets his first career podium with Champion leaders Ross Smith and Tom Nasella struggling in 4th and 6th respectively.

Frank Radosti had another race to forget finishing a lowly 8th.

Mike Buice would have the unfortunate luck to see a Cosimo Streppone appear all of a sudden in front of him at Sunset bend after the latter was recovering from a spin. However, a solid drive would place the Trash Panda Aston Martin driver in 5th place. 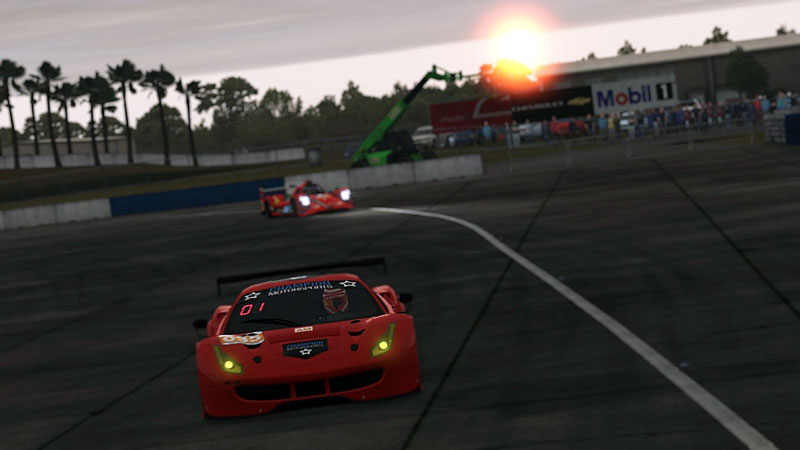 With only one race to go, a lot of Championships remain at stake echoing the competitiveness of all Championships across the field, but some have already been decided. Let’s take a closer look at where we stand:

In LMP2 Drivers, Championship leader and Bykolles driver Colin Moore need to finish 4th or better to clinch the championship. Having claimed a disappointing second today after controlling much of the race, SimHQ Motorsports’ Jason Whited will need Moore to finish 5th (or worse) and win the race himself to grab the top spot.

In LMP2 Teams, Bykolles Racing has secured the Championship irrespective of the Bahrain outcome.

In LMPC Drivers, today’s results mean the championship is settled regardless of the Bahrain outcome, with Bob Roberson clinching first place overall at 82 years old – an outstanding achievement.

In the GTE-Pro Drivers, the Championship leaders are separated by 14 points, with Cameron Sansano needing to finish 3rd or better to clinch the title over Marouane el Idrissi. El Idrissi would need to outscore Sansano by 14 points (win not necessary). For third place, given Jon Uyan and Yassin Marzoug are separated by only 6.5 points, it is anybody’s guess at this point.

In the GTE-Pro Teams, Scuderia Cavalli would need to score a tough 1-2 while SimHQ Motorsports-CMS Fords finish outside the Top 10 to win the Championship. Unless something extraordinary happens in Bahrain, expect this to go the Ford way..

In the GTE-Am Drivers, Tom Nasella kept his Championship hopes alive, but unfortunately for him, Ross Smith would need just a 9th place finish to secure the Championship. Nasella would need to win the round and expect Smith to hit trouble. A 3rd place is up for grabs with “flying” Frank Radosti, who has seen a solid 3rd disappear as the result of two disappointing races and a charging Matt Buice.

A late resurgent Trash Panda Racing Aston Martin might steal 2nd place from the Fords given any opportunity.

With a reschedule of the race to the 5th of December to account for the American Thanksgiving break, the drivers can put their time at good use trying to extract the most out of a month’s practice heading to a spectacular finale thinking of all those dreams and hopes for a World Championship…