CMS Season 5 Round 6 ACC at Barcelona-Catalunya

December 7, 2020 – After an eventful round 5 at Monza last week, Champion Motorsports Season 5 ACC heads to a warm Circuit de Barcelona-Catalunya for the mid-point race of the season! Racers this week faced a 65-minute endurance format where tire management played a crucial role in victory! 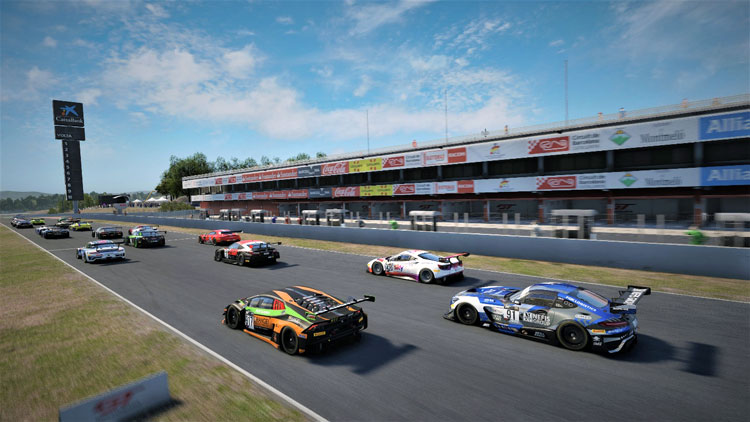 The championship standings for split #1 GT3 have Hamza Gulzar leading the field with 225 points followed by Andi Maier in second-place with 175 points. Josh Staffin is not far behind in third place with 167 points.

The split #1 GT4 championship order is led by Michael Kundakcioglu with 231 points despite missing the race in Barcelona. Nicole Umbarger sits at second place with 177 points and Troy Barman is only 3 points behind her with 174!

Scott Newell leads the split #2 GT3 championship standings with 195 points and is trailed by Chris Pace with 139 points.

Championship leader and Round 6 polesitter Hamza Gulzar #14 Bentley Continental wins his fourth race of the season! Gulzar also claims his fourth fastest lap of the race with a lap time of 1:45:003! Porsche secures second and third place at Barcelona with Dirk Groeneveld #136 finishing in P2 and Christofer Barnes #48 finishing at P3! 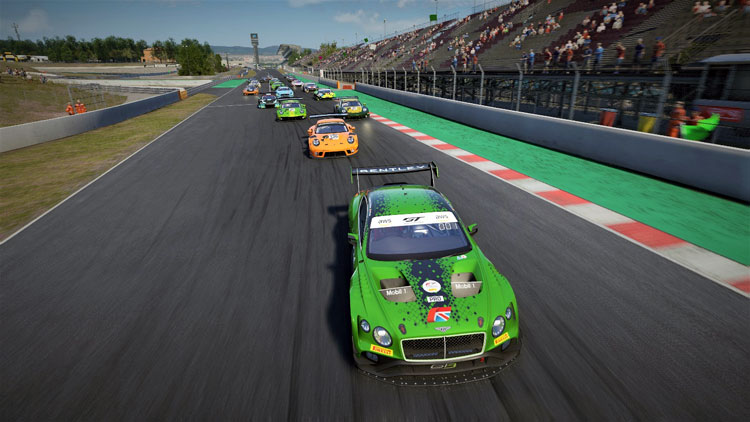 It was a very clean race start for the GT3 field coming down the long straight and into Turn 1. No racing incidents occurred as the racers flawlessly navigate their way through Sector 1. The incident on Turn 5, Lap 1 occurred when Montinola #29 Ferrari 488 GT3 taps Scaptura #83 BMW M6 causing both cars to go off track.

Both drivers were able to safely rejoin the race.

A masterclass performance from Hamza Gulzar as he dominates the field and expertly navigates the GT4 traffic winning uncontested! Dirk Groeneveld steadily pulls away from the GT3 pack building a 20 second lead by race finish from P3 and secures his second-place position.

It was a contested P3 early in the race as Christofer Barnes is chased by Andreas Maier #123 Audi R8 GT3, Branden Ouellet #33 Lamborghini Huracan Evo and Carl Matthes #86 Porsche 911.

Andreas Maier makes the move to take P3 from Barnes down the long straight of Lap 9 into Turn 1! Maier however ran off-track at Turn 7, Lap 12 to avoid hitting a GT4 giving P3 back to Barnes. 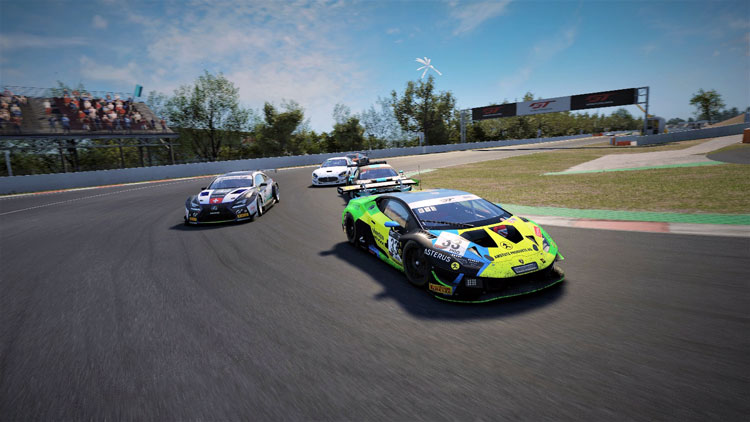 Close race battle for P4 late in the race as Branden Ouellet fiercely defends the fourth position from the advancing Andreas Maier and Cody Smith #646 Lexus RC F GT3! Maier was able to take fourth-place but lost it back to Ouellet as Maier’s Audi R8 losses traction on Turn 10, Lap 31.

Cody Smith takes advantage and narrows his gap to Maier and eventually catches up to him going side by side on Lap 37, Sector 1. Maier defends his position as Smith patiently bids his time to pass while they both skillfully navigate the slower GT4 traffic.

Branden Ouellet however claims best of the rest at race finish as Maier and Smith thunders down to catch him. 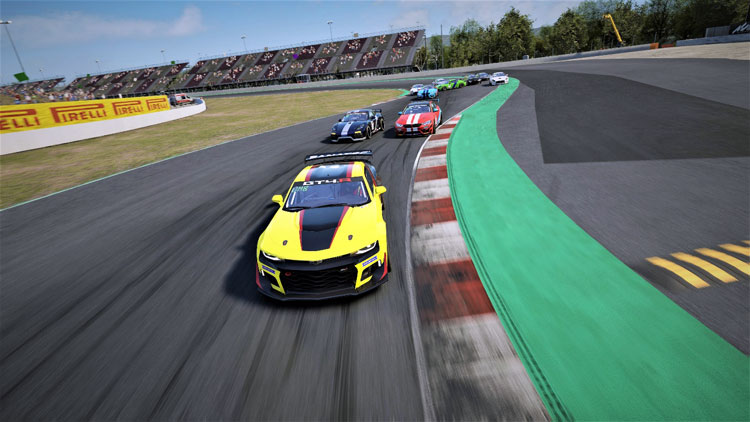 It was a great race start for the GT4 class as they come down the straight into Turn 1! Nicole Umbarger led the GT4 field followed by Simon Fisher #595 Porsche Cayman. Great start for Takis Weekes as he rockets down the long straight in the BMW M4 going side-by-side along with Doug Bourne’s #11 Porsche Cayman and expertly passing him into Turn 1!

Bourne gets a tap from the rear and spins out in Turn 1 forcing him to the back of the grid at the start of the race. 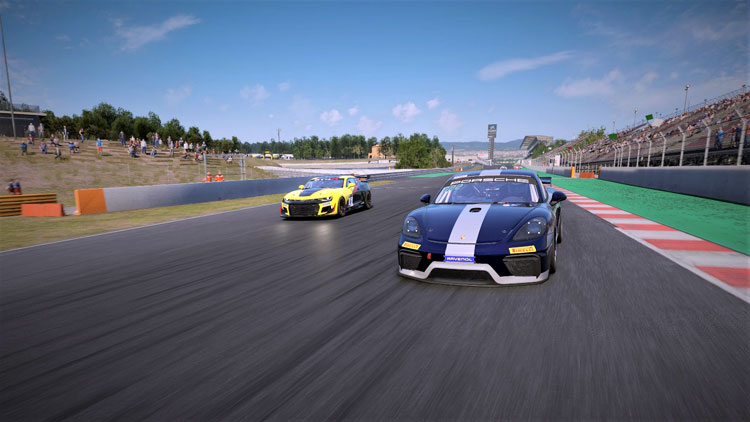 Umbarger controlled the first half of the GT4 race as Simon Fisher hunts down her Camaro and slowly chips away at her race lead. Fisher finally takes P1 as he makes a clean fast exit out of Turn 16, Lap 15 while Umbarger runs a little wide exiting the corner.

Both go side by side down the long straight as Fisher skillfully makes his move from the outside into Turn 1! Simon Fisher then controls the last half of the race securing his victory! 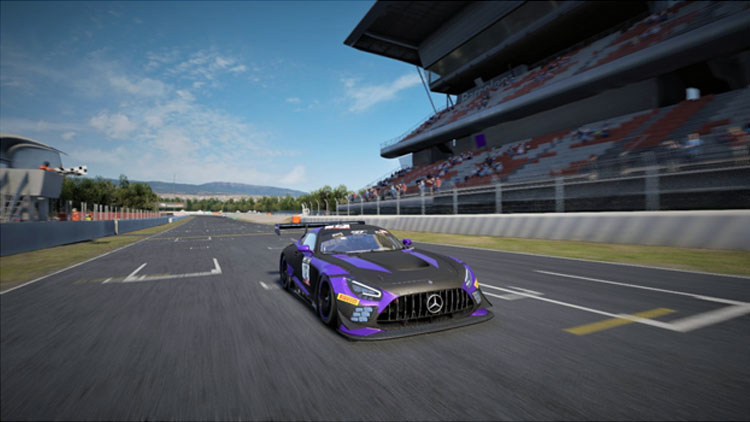 Thiago Alves rocketed to the front of the grid at race start as he catapulted past polesitter Walker McAnulty #113 AMR Vantage GT3 who dropped to P6 after trying to squeeze in between the two Ferraris of Renato Coelho and Mark Barton due to a slow start.

Turn 1 incident ensued as Josh Staffin was unable to avoid a slowed McAnulty causing a chain reaction of incidents into Turn 1.

It was a close race between the top five in the GT3 field as the battle ensued between the Italian GT3s and the Lexus RC F of Scott Newell! Mark Barton was able to pull away from the pack by Lap 11.

Renato Coelho drops out of contention when he is forced to pit on Lap 17 after he makes contact with Josh Staffin on Turn 13, Lap 16, and collides with an on-coming McLaren that was unable to avoid Coelho’s Ferrari. Staffin claims P2 unchallenged for the remainder of the race. 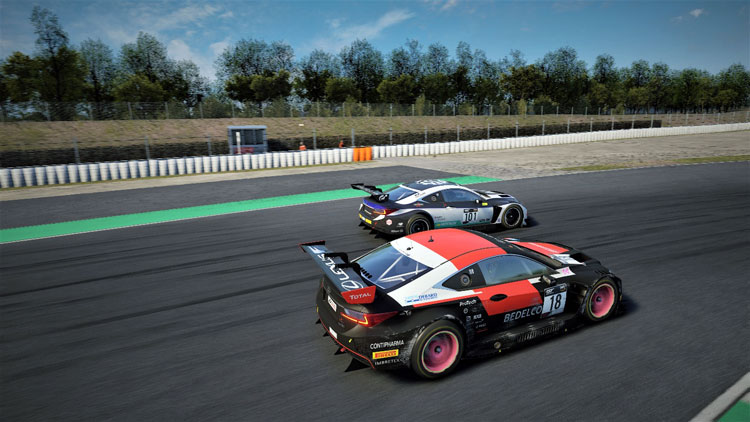 Alves was contested for P1 by the charging Ferrari of Mark Barton! Mark makes a clean inside pass for P1 on Turn 5, Lap 18 when Thiago Alves catches a GT4 into the hairpin. Misfortune, however, resulted in Mark losing the position as he is hit by an unsafe rejoin by Khaled #19 Lamborghini Huracan Evo.

Khaled causing an accident with Noah Leuer #222 Mercedes-AMG GT4 coming out of Turn 9, Lap 18 before the incident with Mark Barton.

It was a Lexus vs Lexus fight for P3 as Paul Seymour comes up the field to challenge Scott Newell. Battle commences on Lap 27 as Seymour blasts through the long straight into Turn 1 waiting for the opportunity to make a clean pass. The two Lexus GT3s go side-by-side into Turn 4, Lap 29 with Newell taking the inside line as Seymour tries to make an outside pass with no success.

The battle concludes on Turn 4, Lap 31 when Seymour makes a late brake attempt and takes the inside line but makes contact with a turning Newell causing both cars to collide spinning Seymour’s Lexus. Newell was able to regain control of his GT3 and pulls away claiming P3!

A superb performance in the GT4 class from Matt Largi #31 KTM X-Bow GT4 who secures his first win of the season and his fifth consecutive podium finish! Anthony Antoine #42 BMW M4 claims the second-place podium after a tough battle with Matt Largi.

Antoine also takes the fastest lap of the GT4s with a lap time of 1:55.980! Adam Stark claims his second consecutive podium finish coming in at third-place! 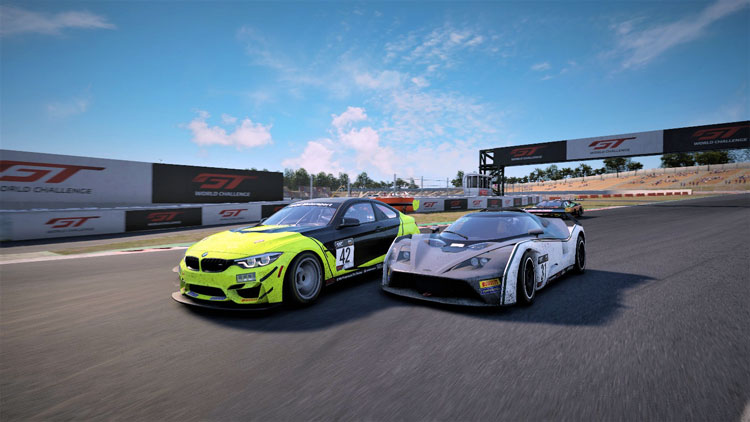 It was a clean race start for the GT4 field despite coming up behind the GT3 field on Turn 1! The GT4 class skillfully navigate the traffic up to Turn 7 when contact between Timur Aliev #7 Audi R8 GT4 and Michael Somnesia #531 Porsche Cayman occurred. Both racers eventually DNF.

Anthony Antoine builds a large gap between himself and the rest of the GT4 field in the first half of the race but a storming Matt Largi slashes a seven-second deficit to challenge Antoine’s BMW for P1 late into the race!

Both drivers skillfully navigate traffic throughout the race but they came to a head at Turn 14, Lap 32 as Matt Largi makes a move towards the inside but a turning Antoine was unable to avoid contact with Largi and spun his BMW. Largi’s KTM however was caught in the rear right by Antoine’s recovering GT4 and was also spun around.

Despite gaining a five-second deficit due to the incident, Matt Largi storms back at Antoine during the extra lap after they cross the line ahead of the GT3 P1 finisher. Battle again commences as Largi and Antoine go side by side from Turn 5 to Turn 8 exchanging positions as they go. The race decider came at Turn 10 of the final lap.

Both drivers go side by side into the hairpin and narrowly avoids contact with each other, Antoine’s grip eventually giving out and caused the BMW M4 to lose traction allowing Matt Largi to pull away for a hard-fought victory!

Mark Sutherland holds on to P3 until misfortune on Turn 7, Lap 15. Mark losses the position after getting rear-ended by Bryce Evans #563 Lamborghini Huracan Evo punting Mark off track. Adam Stark then catches up to take P3 while Mark comes back on track for a safe rejoin.

Excellent drive from Neil Sutherland #68 Porsche Cayman and Espen Cleveland #550 BMW M4. Neil finishes P5 after finding his pace and recovers from a hit by McAnulty #113 AMR Vantage on Turn 1, Lap 16. Cleveland recovers after falling to P7 to finish at P4!

Join Champion Motorsports at the Hungaroring next week for a Multi-Sprint race before the series goes into its holiday break!