November 24, 2020 – Round 4 of Champion Motorsports Season 5 ACC heads to the Nürburgring for 75 minutes of multi-sprint racing.

Josh Staffin #23 Lexus RC F leads the charge for victory in the GT3 class at the Nürburgring! Staffin also captures the fastest lap of the race with a lap time of 1:54.438. The second-place podium goes to Andreas Maier in the #123 Audi R8 rising up from P4 at the race start. Drake Burgoon displayed a strong drive clinching the third-place finish after starting the race in P10. 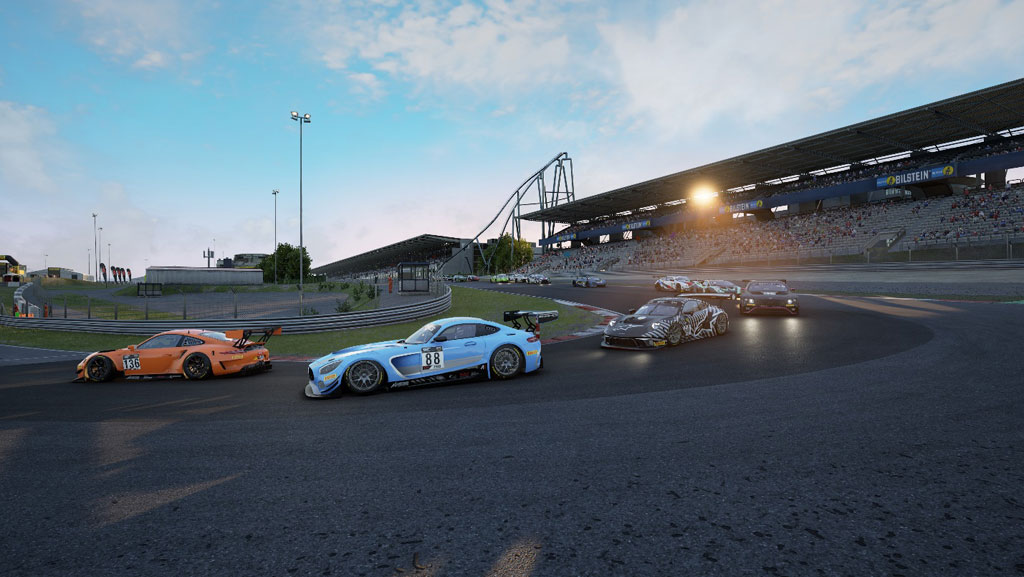 Josh Staffin and Hamza Gulzar go side by side at race start into Turn 1 and Turn 2. Staffin takes the lead as he navigates the inside line into Turn 3 and makes a good exit out of Turn 4. Hamza Gulzar eventually retires the #14 Bentley after losing control on Turn 12, Lap 6.

Scaptura #99 BMW M6 spins the car on Turn 1 after the left rear catches a bit of the curb. Matthes #86 Porsche 911 gets pushed off track after contact with Molla #116 Audi R8 as they head down to the Schumacher S in Lap 1.

An incident between Campbell #98 Porsche 911 and Kundakcioglu #56 AMR Vantage GT4 occurred on Turn 10, Lap 1 when Campbell lost traction on the curb exiting the turn and slams into Kundakcioglu’s Vantage forcing the GT4 off track and into the barricades. It was a strong race finish for both drivers despite the early incidents as Campbell drives his way to P13 overall from P25 while Kundakcioglu fights back to a podium finish in GT4! 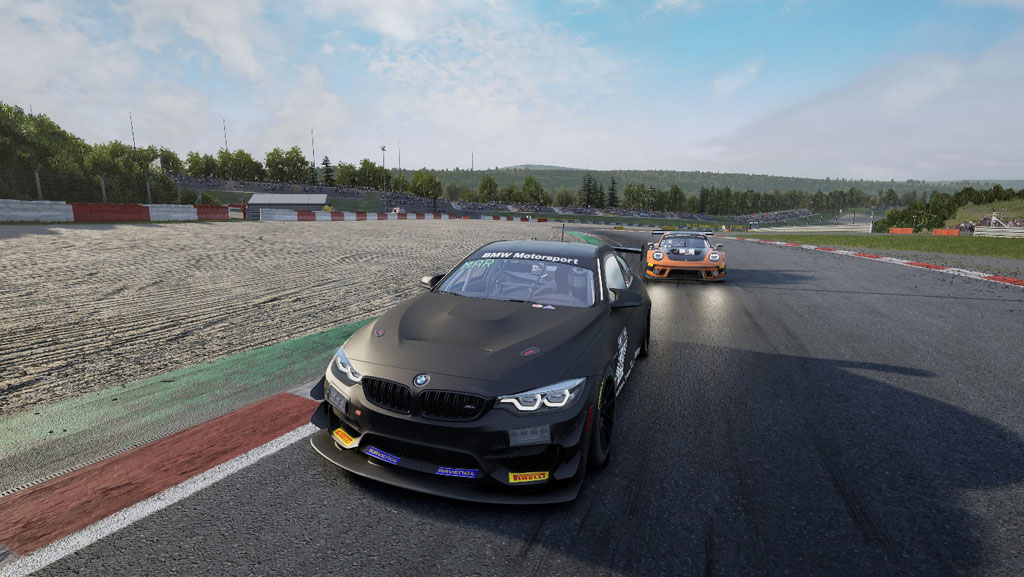 Troy Barman #55 Camaro takes his third win of the season in the GT4 class while Simon Fisher #595 takes his first podium finish coming in at second place. Michael Kundakcioglu fights back up the grid to claim P3 and takes the fastest lap of the GT4s with a time of 2:04.899!

A strong performance from Matthew Marlow #549 BMW M4 who battled back to claim P4 in the GT4 class despite the hit by Florez #25 McLaren 570S in Turn 1, Lap 1 causing Marlow to spin out dropping him to last place at the start. Good sportsmanship from Florez giving up a position after the incident. Marlow along with Kundakcioglu opted for an early pit strategy following their incidents in Lap 1 to repair damages which helped them in their drive up the GT4 class!

It was a Ferrari 1-2 finish in the GT3 category! Rogerio Santos claims overall victory in his race debut with the #177 Ferrari 488! Mark Barton #27 Ferrari 488 comes in at second-place securing his third second-place podium of the season. Floyd Ducharme #914 McLaren 720S GT3 finishes in the top three and claims his first podium finish! 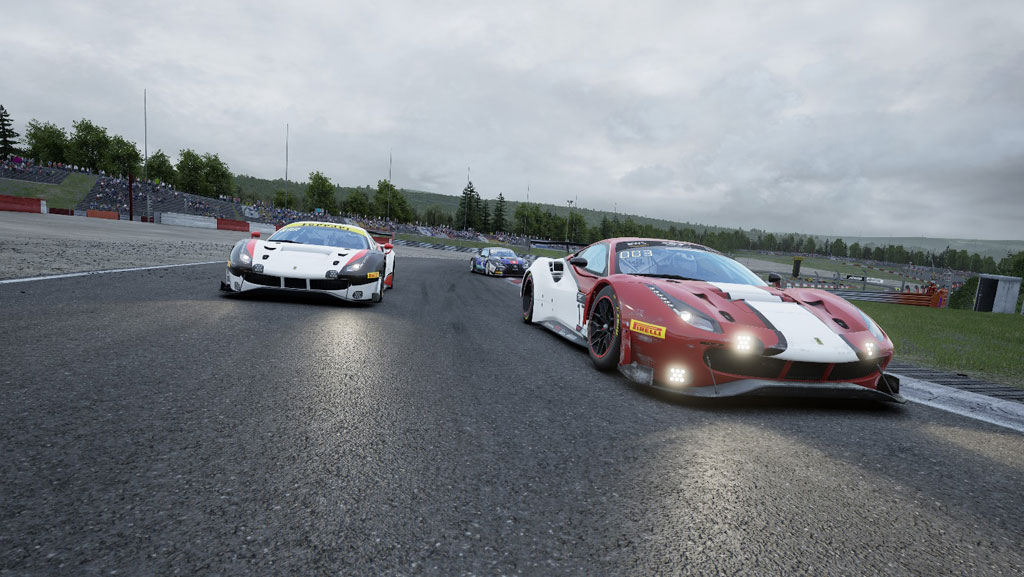 It was a clean race start into Turn 1 for the GT3 class as polesitter Scott Newell #18 Lexus RC F GT3 led the grid in the opening laps. Contact began early into Turn 2, Lap 1 as McLaughlin #728 Jaguar is hit in the rear by Duarte #913 BMW M6 causing McLaughlin to spin and catch another tap from Paul Seymour #101 Lexus RC F who was unable to avoid the contact. Lima #88 also gets caught in the mix as the Audi gets spun by a recovering Seymour.

The Ferraris of Mark Barton and Rogerio Santos battled it out in the opening stint of the race. Barton trailed behind Santos in the first few laps but finally saw an opening to pass at the beginning of Lap 7 as Santos losses a bit of traction coming out of Turn 15. Santos tries to take back P2 position after Barton catches GT4 traffic on Lap 8 but makes contact with Barton eventually conceding the position back.

Rogerio Santos eventually takes the lead as Newell and Barton opt for an earlier pitstop strategy enabling Santos to build a pad for his late pitstops. Santos was able to maintain the race lead for the remainder of the race securing his first victory. 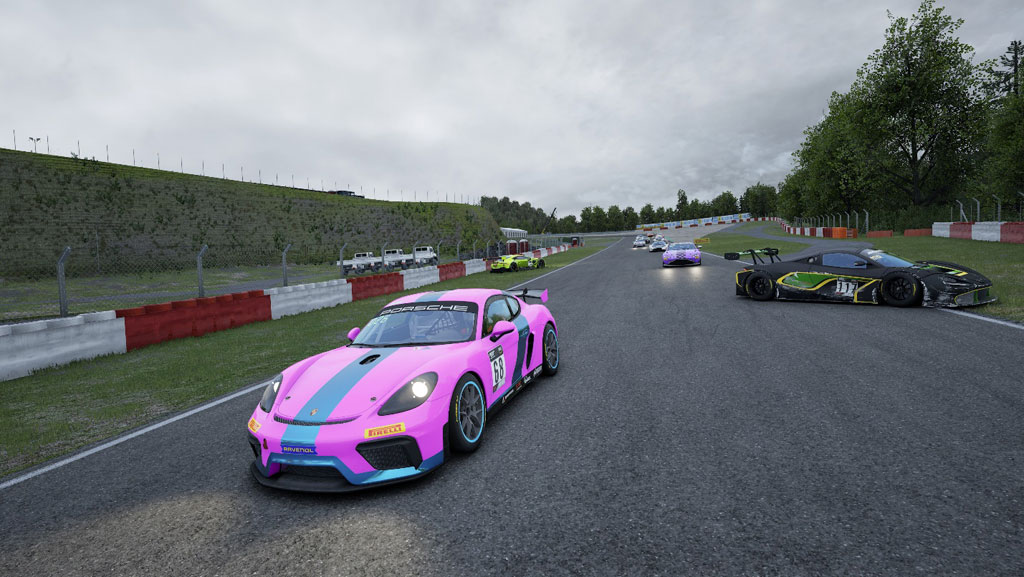 It was a clean race start as the GT4 class thunders into Turn 1! The pack immediately catches up to the rear of the GT3 field due to incidents in sector 1. Quick reaction by Neil Sutherland who narrowly avoids two GT3s colliding at the straight exit of Turn 11, Lap 1. Close battles between the GT4s in the opening laps as the field is only less than 0.5 seconds distance behind each car.

Neil Sutherland maintains the GT4 class race lead in the early stages of the racing pitting on Lap 10 and emerges right in front of Matt Largi who opted for an early pit strategy. Battle for P1 between the two commenced but Neil Sutherland was able to pull away when Largi was impeded by the passing GT3 traffic.

A late mid-field battle ensued as Chris Horton #22 Mercedes-AMG GT4 chases down #85 AMR Vantage GT4 for P5. Both pit on Lap 24 and gets back into the race a second apart. Horton was then able to make a clean pass on the #85 Vantage in Turn 2, Lap 30 but had to give up the position on Lap 31 as they both go side by side to the NGK Chicane.

Round 5 of the championship heads to the Temple of Speed at Monza for a two 30-minute race sprint format. Don’t miss the action and stay tuned!