June 10, 2020 – With only two races left in the season, a trip to the Great White North for the TCR/MX-5 Club Series to the famed Canadian Tire Motorsports Park as the series ramps up to set the stage for the season finale ahead.

Qualifying would set the stage for a gritty battle in the TCR class, with Brian Szabelski taking the pole position with JT Tami starting alongside on the front row. The MX-5’s would be led by Samuel Scott with points leader Kurt Polter taking second spot on the MX-5 grid.

The race start would be uneventful in the TCR class, with the field battling throughout the race for the top spot with four different drivers taking turns leading the race. Szabelski and Tami would exchange the lead early until Lap 5 when Miguel Antonio Alcrudo would take a turn upfront. Behind him, positions would change but never far behind him, and Szabelski would retake the lead until Lap 19 when Kris Hudson would push into the top spot for the final two laps taking the win. Brett Stephens would finish in second place and Tami in third to complete to podium.

The MX-5 race was a 5-car train the first half of the race, with Scott leading the pack. Eventually, Scott would pull away enough to break the draft, and Polter would battle Drew Lidkea, Kenny Rodriguez, and Tim Collier for the second spot. Late in the race, Polter would create a gap back to the others leaving Lidkea and Collier to battle for third. As the checkered flag fell, Scott would take the win, Polter in second, and Collier edging out Lidkea for third place.

The Driver’s Championship in the TCR class has tightened up significantly and JT Tami holds to points lead with 211 points. In second place, Brian Szabelski is only 3 points back, and Miguel Antonio Alcrudo is third. The battle for fourth and fifth is between Liam Park and David Slee not far behind and still within reach of the front.

In the MX-5 standings are just as tight, with Kurt Polter holding a ten point lead over Samuel Scott. In the battle for third place, Drew Lidkea holds a 5 point lead over Tim Collier, with Peter Hebron and Kenny Rodriguez only four points behind.

The season finale for this series is scheduled for June 17th at Circuit Gilles Villeneuve, where the driver’s championships will be settled once and for all! 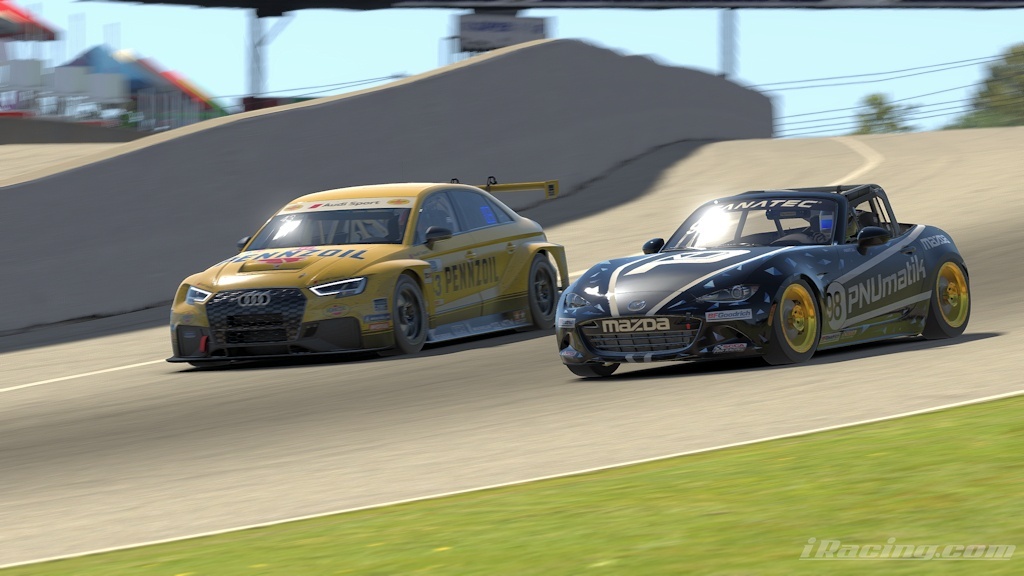 Slee and Jerome Winners at CMS Raceroom Experience Round 1 Daytona

June 5, 2020 – Congratulations to Dave Slee in the GT4 Class and Josiah Jerome in the TCR class for their respective wins in the newly launched CMS Raceroom experience Friday night series. Our first race of the season was at Daytona International Speedway Road Course. We saw a strong field of entrants in both classes, and it was a great way to kick off a months-long of racing with the Raceroom platform on Friday nights in June 2020. Our series will be modeling it’s real-life IMSA counterpart, as we make way to Road America, Laguna Seca, and Mid Ohio in the coming weeks. All CMS members are welcome to join us. Come out and have some Friday night fun and get on the track with an exciting sim we haven’t run much in the past at CMS. 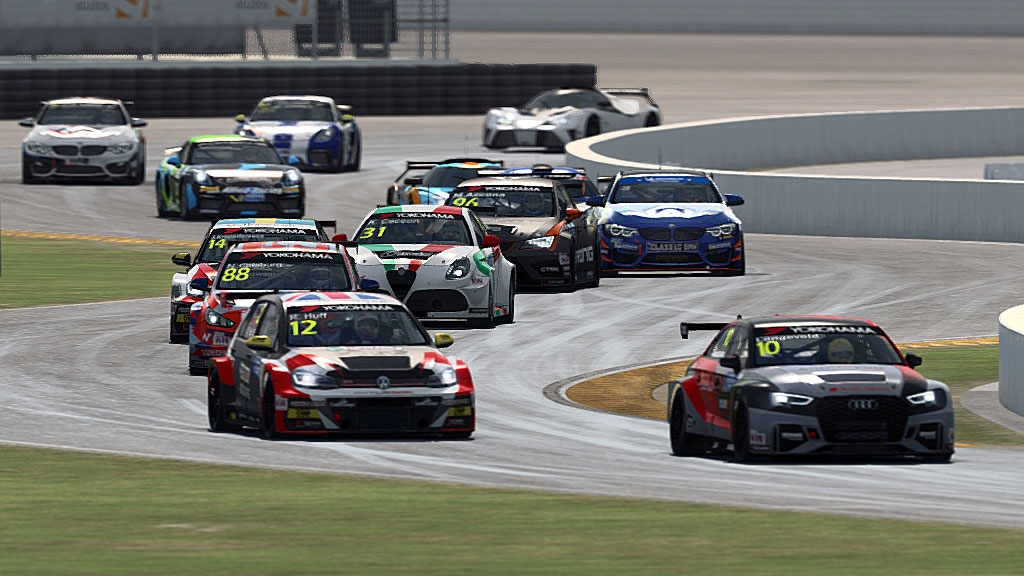 June 3, 2020 – Throughout a season of racing, there are races that go beyond the battle between drivers to include the struggle with the circuit itself. Detroit Belle Isle street circuit is one of those places, with its tight confines, a mix of long straights and fast curves with the lack of run-off and tall kerbs, it only takes a moment to go from the lead to the hauler. For the GTE/GT4 Cup Series, this was race six of the season and set the stage for the final run to the championship.

Qualifying was no surprise once again in the GT4 class with Kurt Polter taking the top spot once again, this time by nearly two seconds! JT Tami would start alongside to lead the Porsche 718 Cayman field to the green.

Ahead of them, the GTE class pole was won by Miguel Antonio Alcrudo with a lap time of 1:27.470, with Drew Lidkea, starting in second place. Alcrudo would have to serve a drive-thru penalty on the first lap of the race from a prior incident ruling, and therefore give up the lead to Lowesky D’oleo who would hold the lead until lap 17 when a determined Alcrudo would charge back to the front. On Lap 21, D’Oleo would retire from the race moving Lidkea up to second place with Rafeal Sosa in third not far behind. As the laps wound down, Lidkea would find trouble dropping him down the order and Sosa would move into second place with Dion Smith now in third. The finishing order for GTE would me Alcrudo, Sosa, and Smith, with Alcrudo’s margin of victory nearly 42 seconds, with zero incidents over a total of 41 laps!

The GT4 class start was clean, with Polter and Tami getting a gap on the rest of the field after the first few laps, then as the GTE class race through the field, the gaps between cars opened up and Polter had pulled out to a comfortable lead over Tami. Behind them, the battle for third place would come down to Steven Spears and Brett Stephens to see who would flinch first. In the end, Stephens would grab third place, his second podium of a short season for him, behind Tami with yet another podium finish, and Polter grabbing his fifth win of the season.

After 6 races, the GTE Driver’s standings have Drew Lidkea holding a slim margin over Dion Smith, with Miguel Antonio Alcrudo not far behind in third. Humberto Roca and Peter Hebron are tied for fourth place only 10 points back of Alcrudo.

In the GT4 Driver’s Standings, Kurt Polter holds a 29 point lead over JT Tami in second, with Jason Lundy only 6 points back in third. Behind them, there’s a tight race for fourth between David Anderson, Douglas Hintze, and Justin Hess.

The next race for this series is scheduled for Wednesday, June 10th at the Silverstone Grand Prix Circuit. The schedule is in the home stretch! 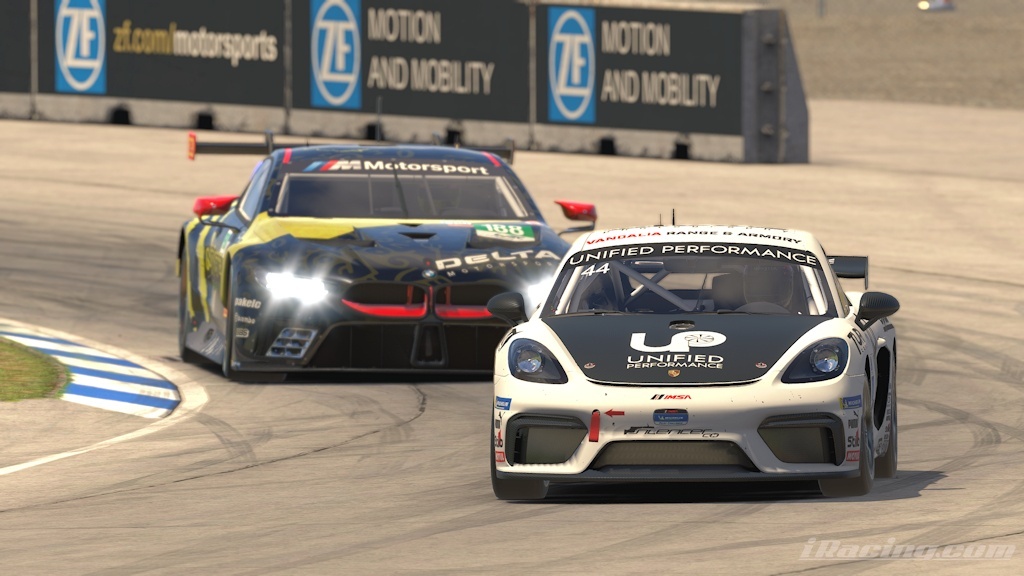 Matt Geddes Does it Again, Celebrates Championship with a Win

May 24, 2020 – One race left after finding out he clinched the Sunday Night Assetto Corsa Championship a week prior. No problem for Matt Geddes as he would cement his Championship season with dominance, by taking yet another win in the season finale this Sunday night at Calabogie, one of the most challenging courses to date that the series would see. Behind him again with another phenomenal drive was Aaron Roberts on the Podium. Justin Poteet would also take his second podium in a row to round out 3rd. This series as incredible with high attendance in every event and a great sign of things to come in our Sunday Night Assetto Corsa Series. Stay tuned for some special event announcements and a new season coming after the traditional summer break. 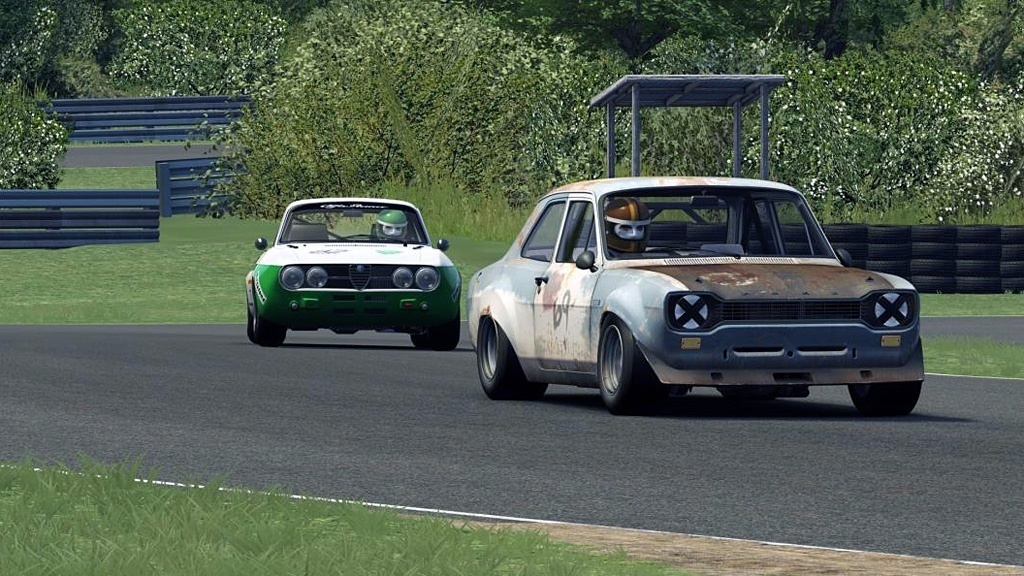 May 20, 2020 – For this week’s TCR/MX-5 Club Series race, the haulers took a drive through the hills of Virginia to the famed VIR circuit where the drivers would negotiate the tight and twisty North Circuit layout. Weather conditions were ideal, and the lap times confirmed this would be a race where the least mistakes make the difference.

The qualifying session showed no surprise in the MX-5 class, where Kurt Polter put his Mazda on the pole once again, this time by a gap of half a second over Bryan Ortiz. The Audis however had quite the battle and in the end it was Kris Hudson winning the pole position by a mere 0.179 seconds over JT Tami.

With the grid of 6 Audis and 8 Mazdas taking the green flag, the battle throughout the first turn saw Hudson overshoot, and Tami takes the lead. As the field came out of the North circuit chute, Tami increased his lead to 4 seconds by the end of the first lap over new driver Mick Blue. Behind them several cars were off the track or turned around, spreading the field a bit. Being an endurance event, pit stops were needed for fuel and after the pit stop cycles Tami was in the lead over Brian Szabelski in second by 10 seconds, with Hudson who had worked his way back through the field into third place. On the final lap, Tami would take the win, his first of the season by 9 seconds. Hudson would get by Szabelski on the final lap to finish in second and third respectively.

In the MX-5 class, Polter started up front and held the lead early, but had Ortiz keeping him honest for most of the race staying withing a few seconds waiting to pounce on any opportunity. Through the pit stops Polter would lead with Ortiz in second, and Dan Rivito in third who was mixing it up often with Kenny Rodriguez. Upfront Polter would keep the fenders clean and take yet another win this season, his fourth in eight races. Ortiz would finish in second and Rivito in third completing the podium.

After 8 races, with two drops applied, the MX-5 Class Driver’s Championship has Kurt Polter with a commanding lead over Samuel Scott by 13 points. In third place, Drew Lidkea has a six-point lead over Kenny Rodriguez in fourth, and in fifth only one point behind fourth, Tim Collier and Peter Hebron are deadlocked.

After tonight’s win, JT Tami vaults into the top spot in the TCR Class Driver’s Championship, with Brian Szabelski only one point behind in second, and Miguel Antonio Alcrudo in third another five points back. Not far behind in fourth is Liam Park, with David Slee in fifth only nine points back.

The next event is scheduled for June 3, 2020 at Canadian Tire Motorsport Park! There are still two races ahead for this series, and lots of points to be won or lost! 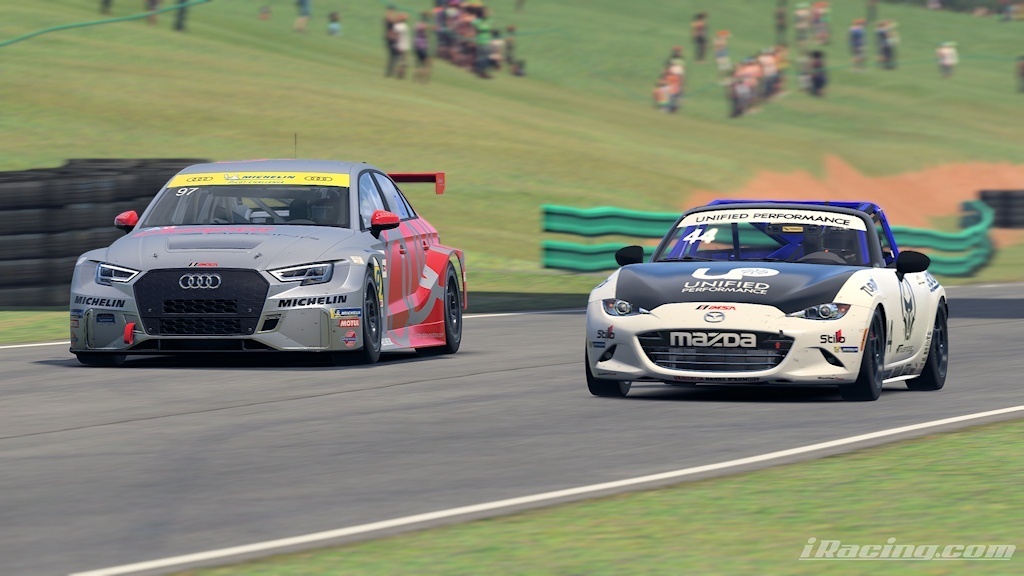 Keep our wheels turning!
Your donation helps CMS hosting expenses. Thank you for your continued support!