Pro – John Paul Hidalgo and Josh Staffin led the field into the first lap, staying side-by-side through the entire first sector; when they arrived at the 1st chicane, Staffin took to the kerb and yielded the lead. Bubba Jones was chasing down Don Bélanger in 3rd, with Keith Briscoe having to defend from Jux Edgar (Silver) and falling away from the frontrunners. Staffin was struggling to match Hidalgo in the early stages, eventually falling back towards Bélanger and Jones behind. Laps went by with things remaining fairly calm; by lap 13 Staffin and Hidalgo had reopened a small gap to the cars behind, but it all came to a peak when Staffin tapped the rear of Hidalgo coming out of the second chicane, sending him into a spin. Staffin pulled to the side and let Hidalgo back past, the pair dropping to 4th and 3rd respectively, with Bélanger taking the lead ahead of Jones. On the next lap, Staffin passed Hidalgo who suffered from oversteer entering turn 4. From there, Bélanger was in control of the race; pulling away from Jones, along with Staffin and Hidalgo fighting over 3rd, Bélanger brought it home to finish 1st overall, taking his first win of the season. Jones would follow in second, with Staffin holding onto 3rd after a spin from Hidalgo in the first chicane on lap 19.

Silver – Jux Edgar and Eric Andersen led the Silver pack, starting 6th and 7th respectively. Unfortunately, Andersen had a poor launch, dropping him into traffic and eventually running wide off track, plummeting to the back of the field. Ricardo Navon would also find himself towards the back after running deep into the second chicane while battling with Jon Uyan for 5th in class. A major order shift occurred when JT Tami tagged the rear of Dominic Guerin (4th and 5th in class respectively) at the exit of turn 12, causing Guerin to spin off track, into the path of Uyan who had moved to avoid Tami. Uyan, Tami and Guerin would drop to 11th, 12th and 13th overall, with Tami and Guerin far off the rest of the pack. Guerin would later spin, suffering significant damage and pitting for repairs. The second chicane would prove lethal, spinning Dave Hassar from the class lead on lap 7, Edgar from 5th in class on lap 12, and Uyan nearly spinning on lap 17, allowing Tami to pass for 4th in class. With Andersen leading the class in 6th overall, the fight for the final podium spots came down to Navon and Valenzuela, 2nd and 3rd in class from lap 8 to lap 19, when Valenzuela outbraked Navon into turn 1, taking 2nd in class and eventually finishing there. Thus, the final podium in Silver class was made up by Andersen 1st in class and 6th overall, with Valenzuela 2nd in class and 7th overall, and Navon taking 3rd in class and 8th overall.

AM – No AM drivers were present this round. 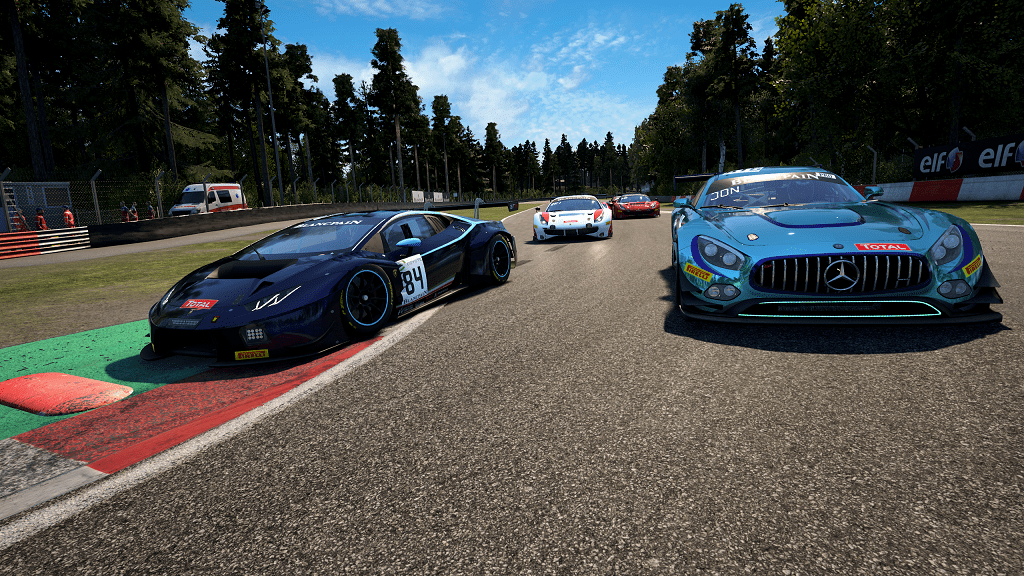