Pro – A rainy qualifying 1 shuffled the order, with Bubba Jones, Don Bélanger and Austin Vicari all starting well down the order. Josh Staffin, John Paul Hidalgo and Keith Briscoe held their respective starting positions with a clean run up Raidillon. Jones had to take to the run-off to avoid Steve Poe (Silver) spinning in front of him, dropping from 9th to 11th. Vicari capitalized on the incident to move up to 8th overall. With Staffin struggling up Raidillon, Hidalgo took the lead on lap 2 and promptly opened a gap. Lap 5, Bélanger went for a late move against Dave Slee (Silver) for 9th; they collided and spun, with Bélanger taking serious damage, dropping him out of contention and putting his position in the Overall Championship at risk. Vicari and Jones made their way through the field up to 4th and 5th respectively, until a mistake from Vicari saw him run wide at turn 1 on lap 12, allowing Jones through. Hidalgo was a risk of running out of fuel in the closing stages, but had created enough of a gap back to Staffin to maintain the lead and come home in 1st. Staffin finished in 2nd, with Briscoe having fallen away from the pair and coming home a distant 3rd.

Silver – JT Tami led the Silver pack at the start in 4th overall, with Ricardo Navon and Eric Andersen for company. Dominic Guerin collided with Steve Poe at the start, dropping Poe to the back of the field. A moment of snap-oversteer from Guerin dropped him from 9th to 11th. Contact between Dave Slee and Don Bélanger (Pro) on lap 5 dropped the pair from 9th and 10th overall to 13th and 11th respectively, and well away from the leaders of their respective classes. On Lap 7, Dave Hassar pitted for repairs after a spin into the barriers, falling out of contention. Andersen had dropped back from Tami and Navon, until a collision between the pair on Lap 9 saw them fall to 7th and 8th respectively, giving Andersen the class lead. Valenzuela retired on lap 10, after slamming into the barriers at speed up Eau Rouge. Poe would stop for repairs on lap 12 after another collision with Guerin, meeting the barriers and falling away from the class leaders. Slee ran out of fuel on the final lap, dropping from 10th overall to 12th. Andersen would come home 1st in class and 6th overall, with Tami just holding Navon at bay for 2nd and 3rd in class (7th and 8th overall respectively).

AM – Michael Mortensen, being tied with Jorge Rivera on points in the AM class, was the only AM present this round; as such, barring any incidents, he would claim the AM Class victory here and could dedicate his efforts towards bringing home a solid finish for the Overall Championship. Mortensen ran a clean race, staying out of trouble and gained well through others’ misfortune, resulting in an 11th place overall and securing the AM Class Championship. 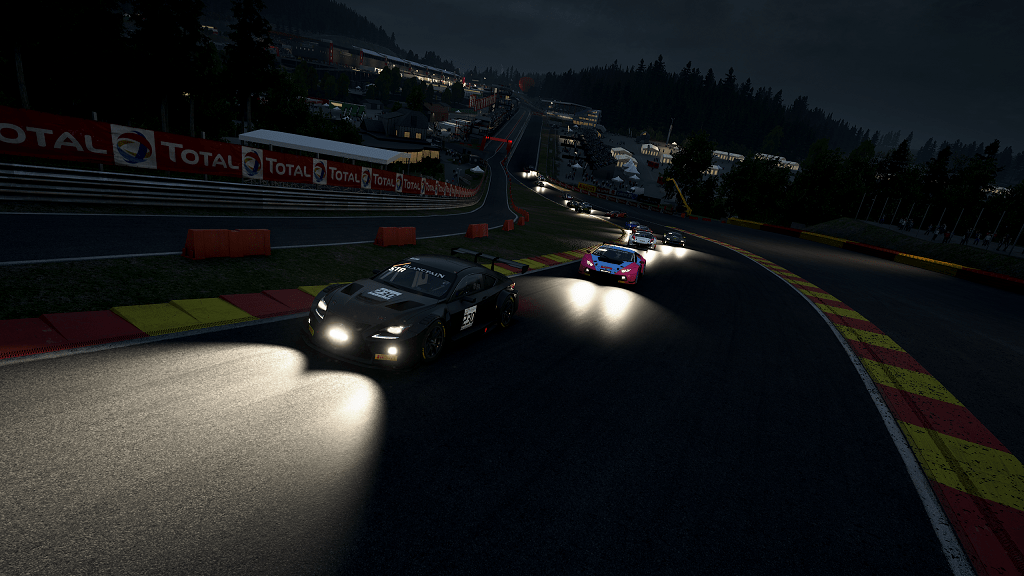