June 21, 2021 – The Assetto Corsa Competizione GT4’s were in action at Silverstone this past week. 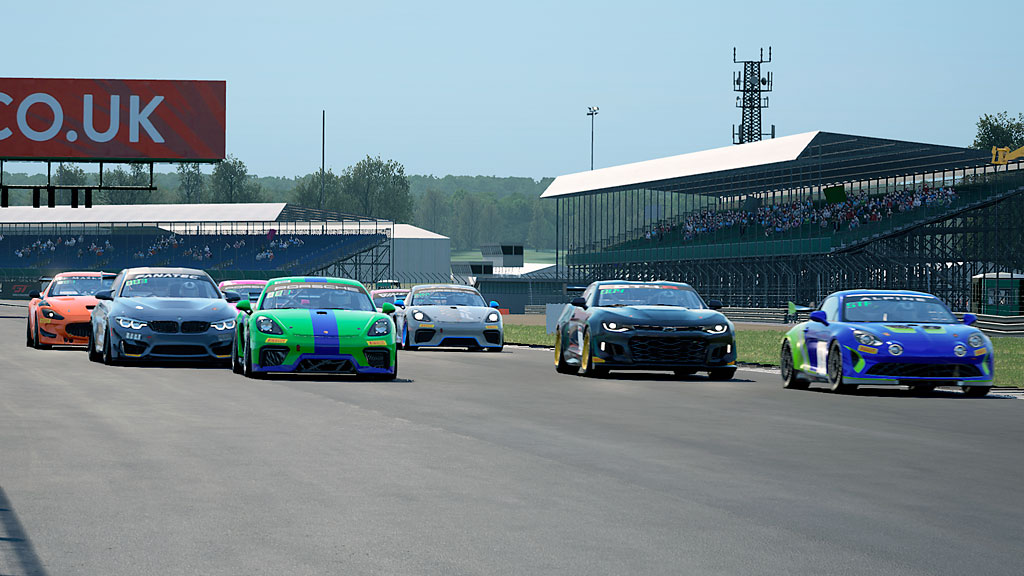 With just a 14-minute qualifying session and a long track, only 6 flying laps were possible for those first out of the pits. But D. Bourne needed only 2 laps to unlock a 2:10.596. Though ultimately good enough for pole, it was still early in the session and so they went for a second stint on the quickly improving track – 2:10.326 being the final nail in the coffin.

Silverstone, light rain, and Double Parking: A lovely combination indeed! While the forecast called for a 20% chance of light rain / mixed conditions, only 1 of those “percents” was “Medium Rain.” Two required pit stops (only fuel is mandatory) meant that when the rain came late, the strengths and weaknesses of the varying pit strategies came to bear. Starting the race on 2/3rds fuel load turned out to be the safest balance, but D. Bourne’s pace advantage allowed them to carry more fuel at the start and therefore run deeper into stint 1 and into the changing-to-rain conditions.

The start saw a small mistake from polesitter D. Bourne, who got caught using Porsche’s infamous 0th 1st gear. The second row of J.T. Tami and A. Ayala Delgado quickly closed the gap while the slow-starting Sutherlands played it safe. D. Groeneveld and the roaring Maserati horsepower began moving forward immediately, completing a three-wide pass at Copse (turn 1) to move from 7th to 5th.

Up ahead, D. Bourne recovered well and entered Maggots (turn 2) cleanly ahead of the side-by-side J. Steele and A. Ayala Delgado. Off-line and on cold tires, J. Steele ran just wide into the grass on the left, rejoins quickly but safely, and is immediately side-by-side again – this time thru the right-hand apex of Becketts (turn 5) with N. Sutherland. Three turns later, a late-braking move by J. Staffin into the Club Chicane (turn 8) relegated J. Steele to 7th place (after starting from 2nd) and solidified their critically correct strategy decision to take their first pit at the end of lap 1. Though 30 seconds back, the clean air allowed J. Steele to show their true pace and skill, gaining up to 1 second per lap by consistently running between 2:11.8 and 2:12.3 for 23 laps. This undercut-of-the-century resulted in the 6 positions (75% of the field) gained, none of which were required to be made on the track.

Ahead of J. Steele on track but slowly falling behind in the race, 3rd thru 6th battled off-and-on for 10 laps, proving to be the exact roadblock J. Steele pitted to avoid. Lap 1 saw a pass attempt by D. Groeneveld into Village (turn 13) after discovering that the Maserati at their control had amazing pace thru the fast Abbey and Farm curves (turns 11 and 12). But J.T. Tami held a left side-by-side position all the way down the Wellington straight, claiming the apex and holding 3rd place into Brooklands (turn 16).

Laps 2 and 3 held a similar theme while D. Bourne and A. Ayala Delgado in 1st and 2nd were able to extend and maintain their respective gaps to 2.5 seconds. At the back of the main pack, J. Staffin wrestled and wrangled their Ginetta from 8th to 5th by sending 5+ passes and re-passes on track, capitalizing on any and all openings within striking distance. After pitting on lap 10, J. Staffin’s pace shone as they made up 4 positions on pit strategy during stint 2.

On lap 25 of 34, the 1% came true and conditions crossed over into wet tire territory. D. Bourne, J. Steele, and J. Staffin from 1st, 2nd, and 4th all came in right away and immediately began gaining time on those who remained on slicks. In the chaos, M. Sutherland, J.T. Tami, and D. Groeneveld lost out, having to either pit an extra time or take tires twice. Consistent rain to the end of the 77-minute race meant smooth sailing for the front runners who ended up spaced out by 9 and 16 seconds.