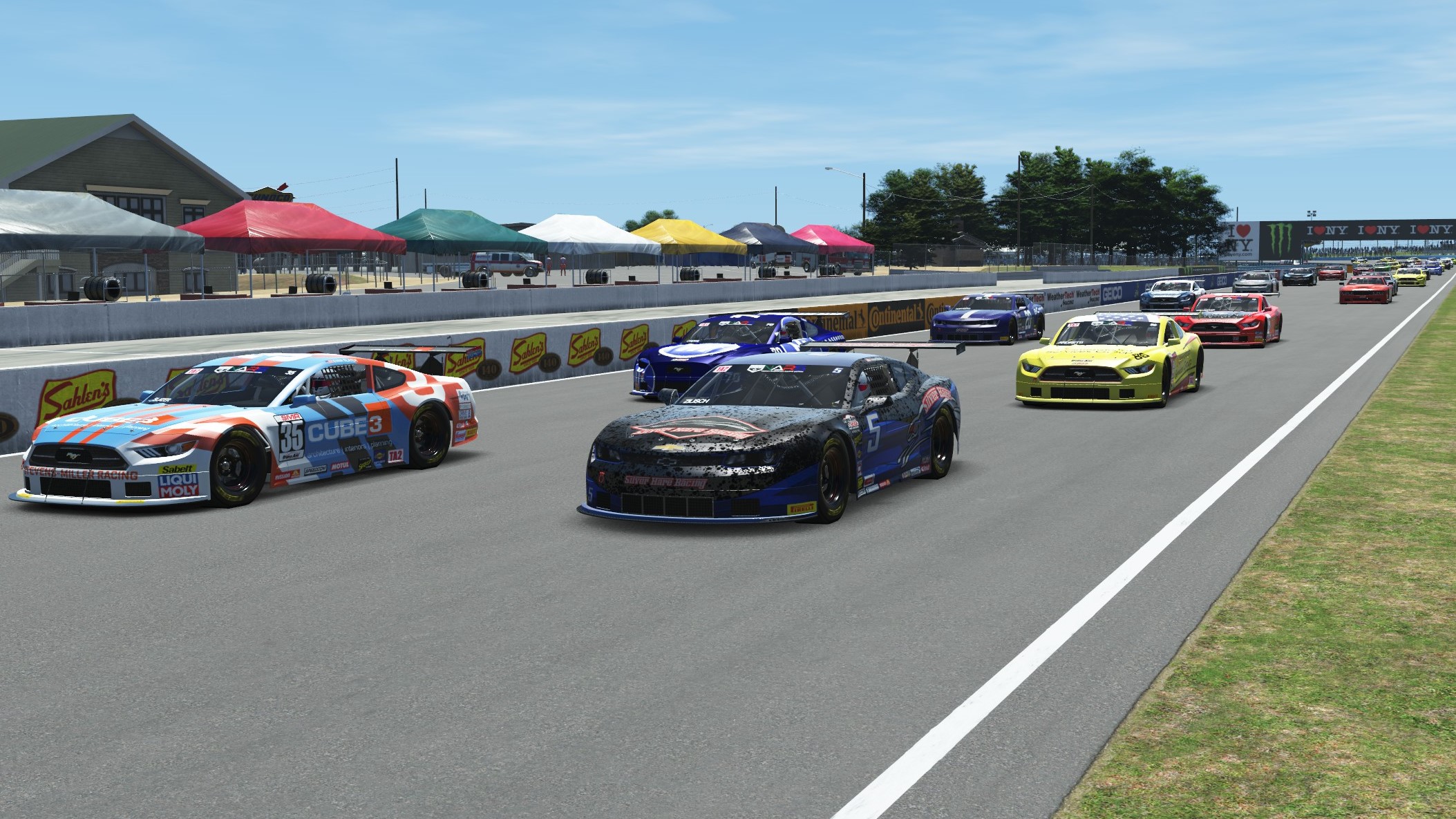 For our final ‘short’ season of NARS in 2022 we’re going to return to our roots in North America for one of the most popular and iconic series of the continent – the Trans Am series.

Started in 1966 by Sports Car Club of America (SCCA) President John Bishop, it was first known as the Trans-American Sedan Championship and has been know by at least 20 different names over the years. Originally a Manufacturers’ Championship series for modified passenger sedans and coupés it is now a Driver’s/Manufacturers Championship with TA and TA2 classes plus three production classes XGT, SGT and GT. In addition to the continental series, there have also been regional series for drivers limited geographically, with the Western series the sole example currently.

The full weekend schedule includes a variety of practice and qualifying sessions plus two races – TA2 and then TA/production cars, with the races running 100 miles at each track.

For our series, we will have the usual practice, Q and race schedule with races running the 100 miles, as in real life. There will be a PRO and AM Driver’s Championship as well as Hard Charger and In The Groove trophies for the driver making the most gains in each race and most consistent driver respectively.

The TA2 class brings back the “Muscle Car Wars” of the 60’s and 70’s, when revered brands like the Chevrolet, Dodge and Ford released hot rod versions of their Camaro, Challenger and Mustang to try to prove who made the best performance cars on the American roads. The competition is incredibly close thanks to rules that keep an equal eye on the bottom line as well as the finish line.

NARS is very excited to be debuting the latest of the Storm Gang Simulations offerings of high quality third party modeling in this series, featuring the: 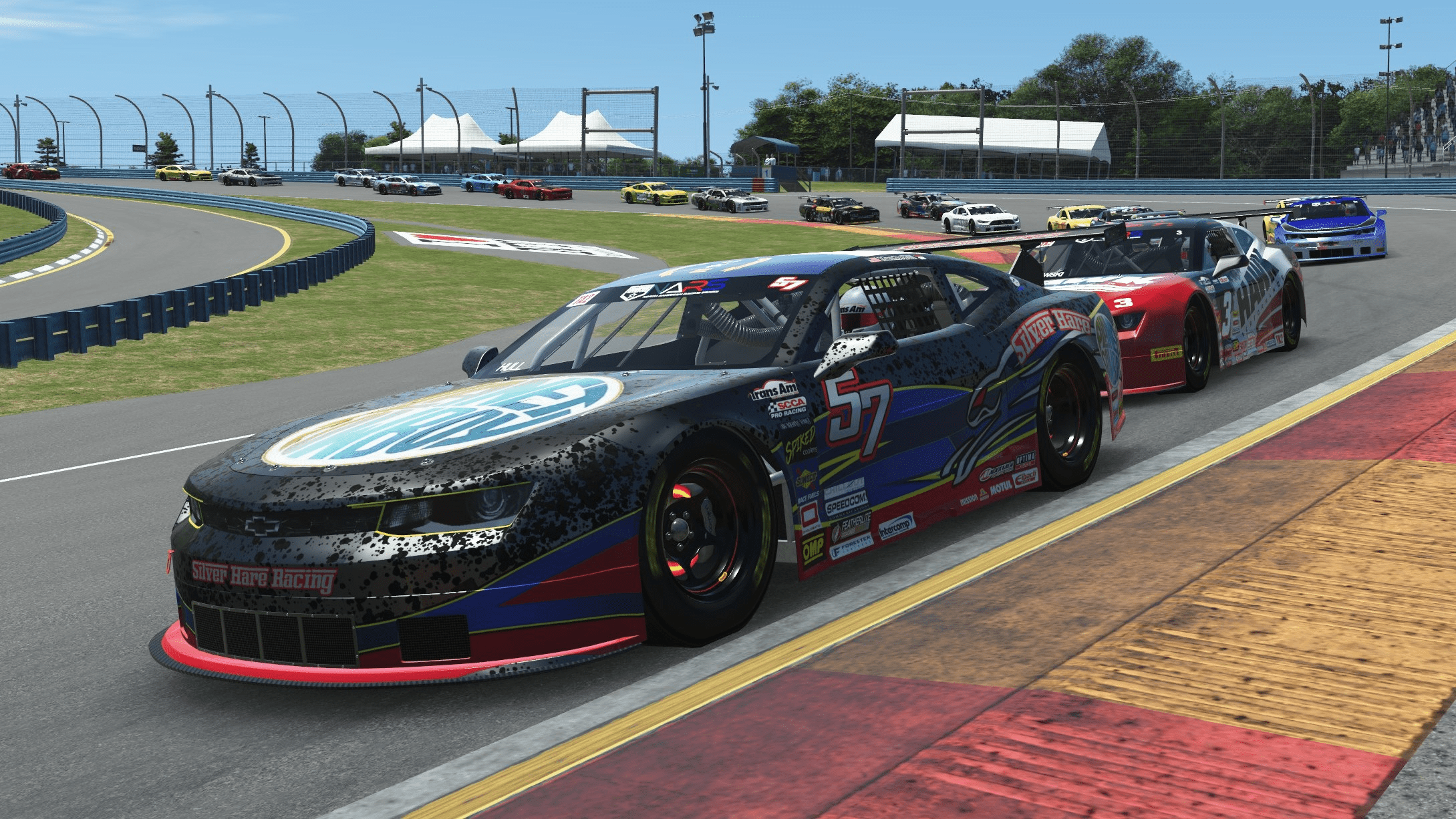 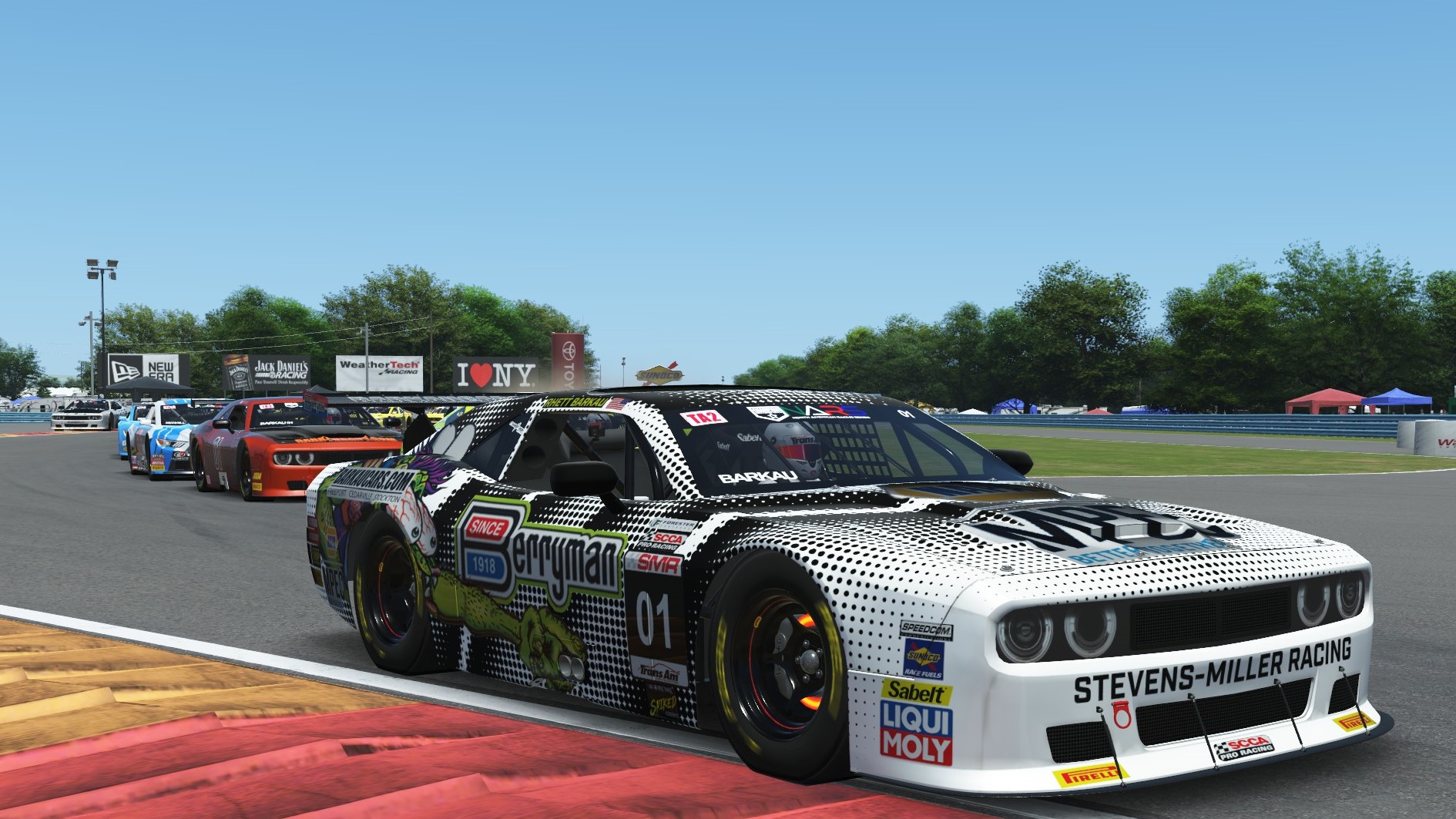 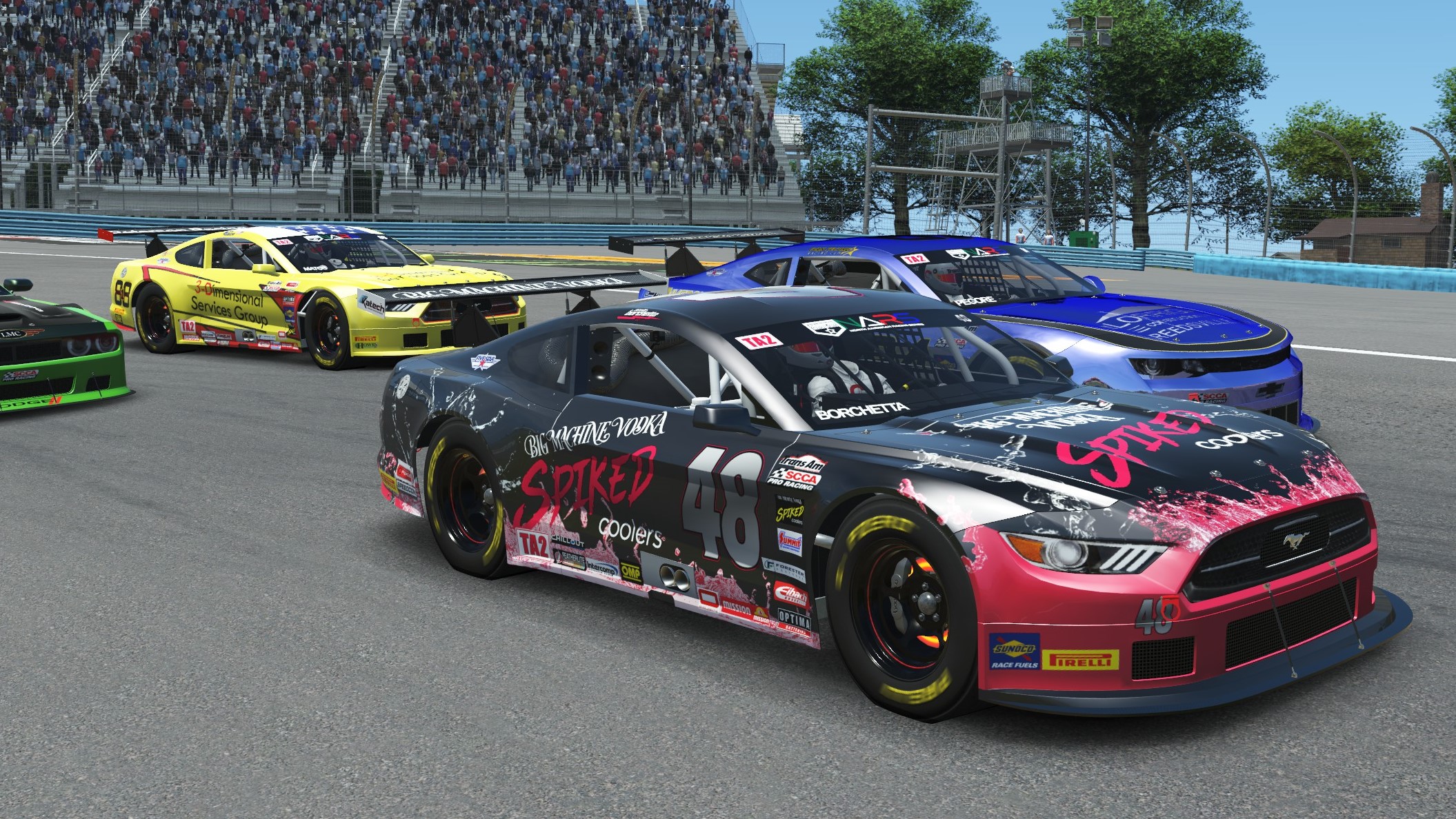 Each car in the SGS TA2 2022 mod has been developed from scratch with input from drivers and teams that race these cars in real life. In addition to physics and handling that closely matches that of the real cars, the mod also includes an extensive set of liveries from the 2022 series as well as several ‘retro’ Dodge liveries.

The cars will be available exclusively through CMS/NARS after completion of a short survey. Get the details on the NARS discord channel at CMS https://discord.com/invite/4ckmjPX.

The 2022 real life season is 12 races long and NARS will be recreating almost all of that championship, taking advantage of the increasing range of great DLC and third party tracks that are becoming available.

Those tracks listed as DLC must be purchased in order to race those events – the remainder will be available either through the NARS Steam Workshop item or linked to it as a required Steam Workshop Item subscription for the race. 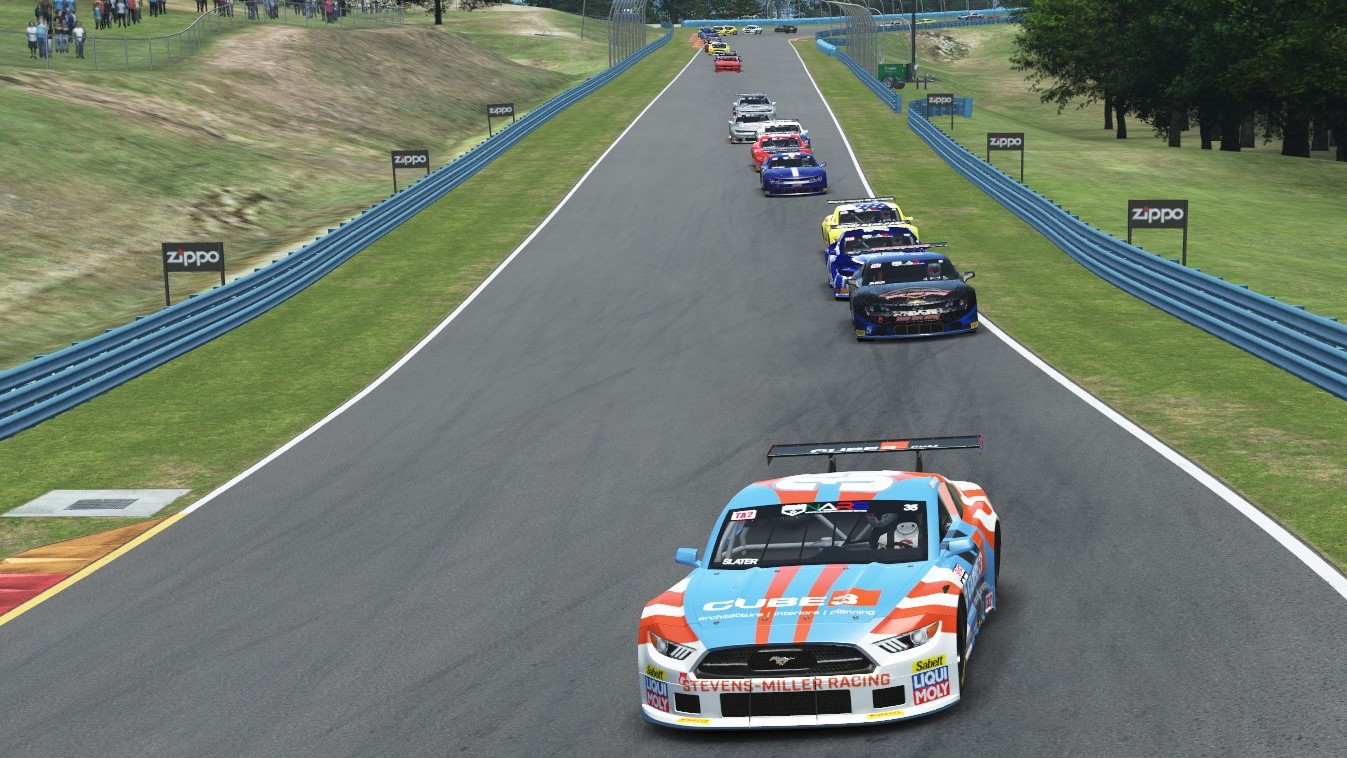 There will be an OZ designated for each race in the driver notes that will be posted to the NARS #ta2-info channel and noted again in the pre-race brief. There will be an automatic review of the OZ post-race.

No refueling is allowed during races, however drivers MAY pit for tires and/or damage as they feel necessary. 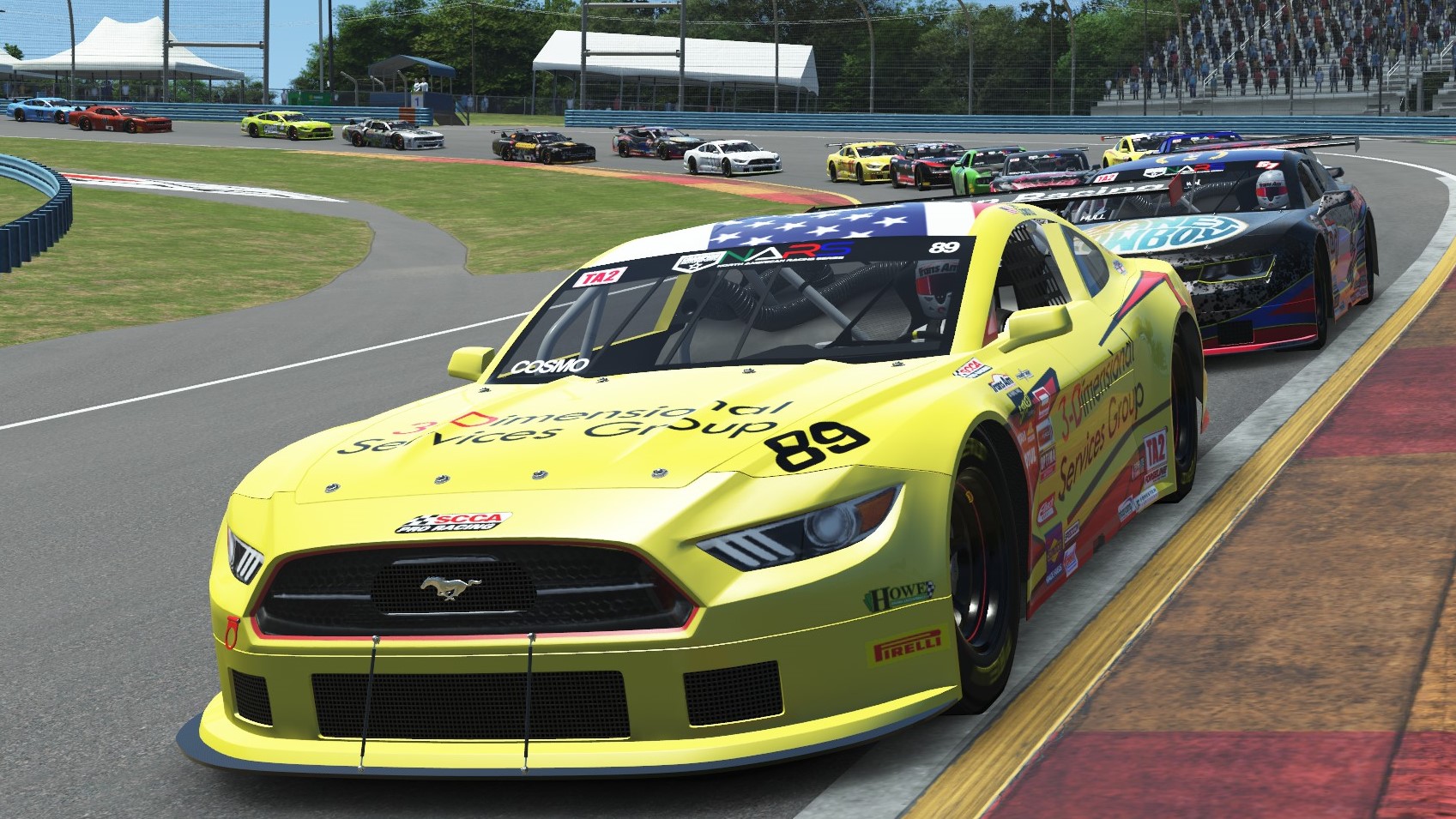 Points will be awarded each race for championship standings. 2 drop races.

Points will be allocated by car class as follows:

Drivers recorded as DNS or DNF do not receive points.

rF2LA will be used to record the hot laps, qualification, race and championship results.

There will be two individual driver championships, PRO and AM. Drivers must declare their category in the #ta2-discussion channel before they enter their first race.

Changes of car and/or class may be made once and points recalculated for ONE change (either class, car or class+car) during the season. Further changes incur a forfeiture of points to that time.

Drivers will compete within their driver class for this trophy. 2 points for each race will be awarded to the driver in each class that gains the most positions from the starting grid to the checkered flag. In the event of a tie in a class for a given race, the points allocated for that race will be divided equally between the tied drivers. Drivers must have completed the race (ie no DNF/DNS) in order to receive points.

In the Groove Trophy

All drivers will be competing for this trophy. Each race, the five most consistent drivers, as compared to their own fastest lap, will be awarded 5 to 1 points, in order, towards this trophy. Drivers must have completed the race (ie no DNF/DNS) in order to receive points. 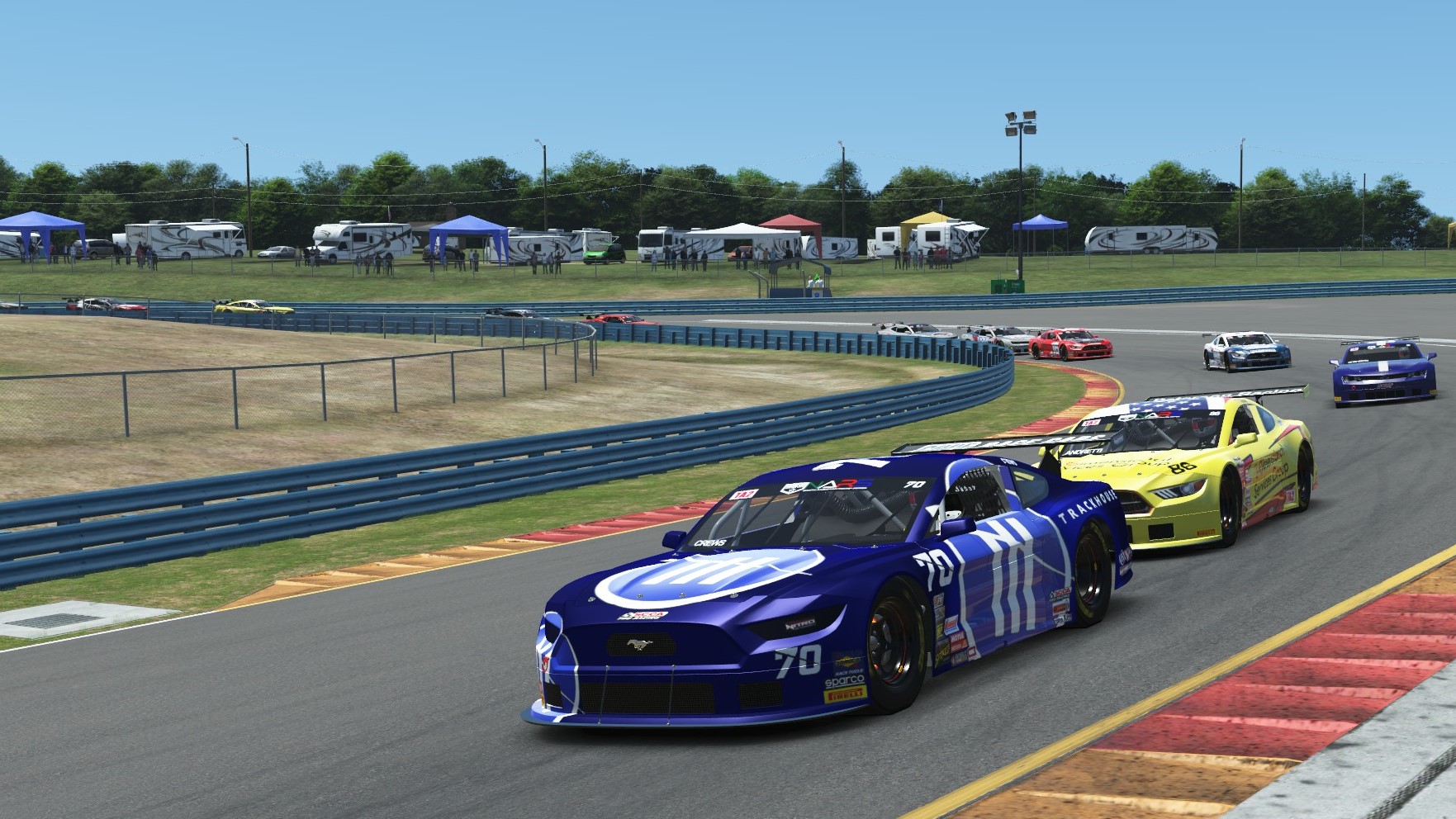 Liveries that recreate those used in the real life 2022 series will be provided and drivers will be able to ‘claim’ a livery by DM to the NARS admin, first come, first served.

Drivers are also encouraged to paint their own custom liveries. Templates will pinned to the #ta2-info channel and will contain a small number of required elements (CMS/NARS banners on the windows as well as series decals) that must be respected.

Skins and car #/team name submitted to Matthew Overton BEFORE 1800 EST 23 Oct 22 will be added to an update that will be posted to the NARS Steam Workshop item before the first points race of the championship.

Custom liveries completed after this time may be loaded using CMS provided cars through the use of loose skins, but please log onto the server a couple of days before the race so your file will get uploaded properly and avoid clogging the server on race day.

The use of the NARS numbering system is required for custom liveries and drivers not yet holding a NARS racing number may choose from those available, as listed at https://docs.google.com/spreadsheets/d/13wo6t9tP2E1LCAUaJxE0osyKsnnnuyfh3N5T9Iv2WbQ/edit?usp=sharing and advise the series admin of the number they would like.

We will use the latest stable build of rFactor 2.
The damage setting is 75%.

Crash Recovery is off. That means your car can fly off the track and land upside down. Drive carefully!
Driving View is open.
1x fuel on all cars.
Weather will always be live weather conditions.

There is no pre-registration for the series or a race. Just show up, pick the driver class and car, get in some practice then drive and have fun!
The server name will be “CMS TA2 [track name]”.
The server race password will be provided at server reboot on raceday.

Drivers will be able to use the rF2 aids of autoclutch and autoblip/autolift ONLY.

The race will be live-streamed on YouTube at our channel https://www.youtube.com/channel/UC7Kdp07PvIeW47f0_sM0emw

We will use the CMS Discord rFactor 2 voice channel for race communications.

CMS Discord is available at https://discord.com/invite/4ckmjPX

The voice channel is only required to monitor race control during the event. You do not need a microphone if you do not want to speak.

If you have a microphone, please set it to “push to talk”. If that just doesn’t work for you, PLEASE set the voice-activated audio level up considerably so your coughing, wheezing or sim controls grinding isn’t “shared” with everyone else. Don’t be “that guy/girl”.

Chatter during free practice is permitted and encouraged! For qualification and races, please be brief in your communication on Discord and talk only if absolutely necessary. One sentence then quiet is requested. No text chat AT ALL during qualification or race.

Abusive and/or profane in-game chat, Discord, or forum post language may lead to that driver receiving a sanction up to and including a ban from CMS.

Should a driver join the event server without being in the Discord channel, they will be sent 3 text prompts in rFactor 2 text chat to join the CMS Discord server. After the 3rd prompt, they will be removed from the race server by race control until they rejoin with Discord active and monitoring the race channel. 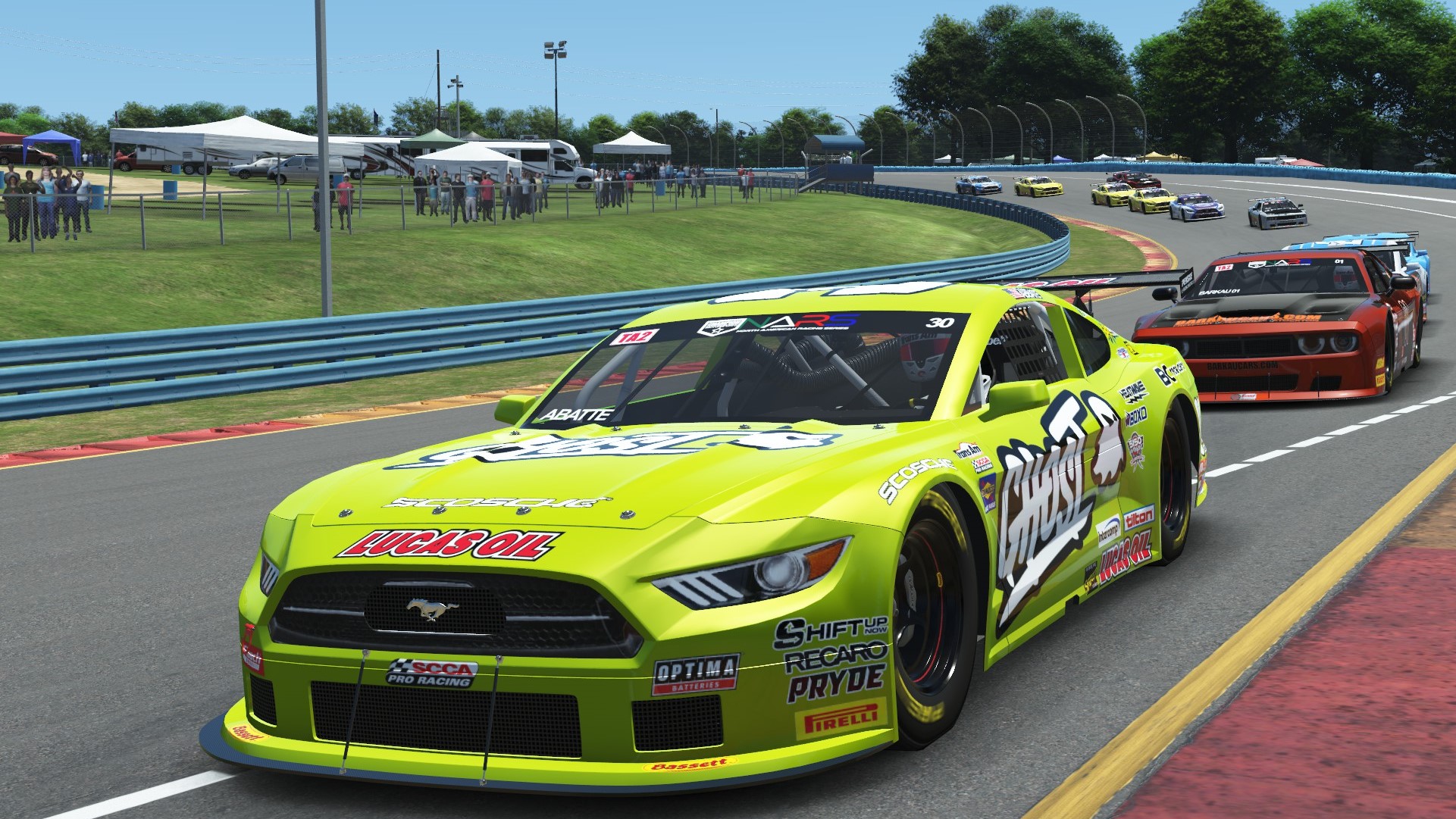 There are no live stewards. A post-race Incident Review Request may be submitted for adjudication with any resultant penalties to be served in the next race competed by the driver(s) at fault. The IRR form may be found at https://cmsracing.com/incident-report/.

rFactor 2 system assigned penalties during races must be served. The Race Director will only have the capability to clear penalties and driver DQ during practice on the race server and then AFTER qualification but before the race.

Drivers are strongly advised to reboot their computer just before joining the server on race night.